Five of our favorite movies within movies 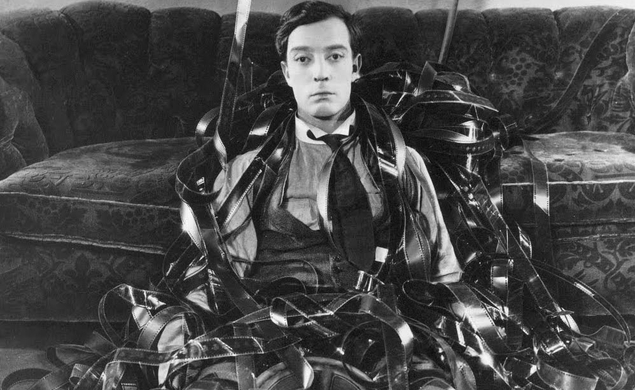 In our next Movie Of The Week, 1924’s Sherlock Jr., Buster Keaton’s nameless projectionist falls asleep at work and dreams himself into the film onscreen. It’s one of the earliest examples in cinema history of a movie within a movie, and in honor of this landmark, we’ve chosen a few other favorite examples of these meta-moments when a film pauses to watch another film that exists within its own fictional universe.

One of the cleverest of all the movies-about-movies, Singin’ In The Rain lightly spoofs the panic in Hollywood when “talkies” came into vogue, following silent film star Don Lockwood (played by Gene Kelly) as he arrogantly tries to do what he’s always done in his pictures, but with spoken dialogue. The result is a disaster of a preview screening, as the audience howls with laughter at Don’s hammy line readings. (It doesn’t help that the sound goes out of synch early on, putting Don’s words in his co-star’s mouth and vice-versa.) A chastened Don retools the film into a musical called The Dancing Cavalier, which goes over much, much better with his fans; but the screening of the new version isn’t as memorable as The Dueling Cavalier première, which shows how seemingly smart people can make what they’re sure are all the right moves, and wind up with something horribly wrong.

Robert Altman’s adaptation of Michael Tolkin’s novel The Player (with a script by Tolkin) ratchets up the satire of blockbuster-era moviemaking, where creative decisions are left up to cynics in power-suits. Throughout the film, studio executive Griffin Mill (played by Tim Robbins) is simultaneously trying to cover up a murder and lay a trap for his rival Larry Levy (Peter Gallagher) by putting him in charge of a crowd-pleasing thriller with a downbeat ending. At the end of The Player, the audience gets to see how Habeas Corpus—a movie that was supposed to have “no stars” and end with the heroine dying in the gas chamber—has been rescued by Griffin, who cast Bruce Willis and Julia Roberts, and added a happy ending and a catchphrase. It’s a meta moment, underlining that Griffin is a killer in more ways than one: He’s also strangling the life out of cinema.

By 1993, macho ’80s action movies had gone so far over the top (as seen in films like Over The Top), that they were even getting mocked by some of the same men who’d grown rich making them. Last Action Hero from director John McTiernan (Predator), screenwriter Shane Black (Lethal Weapon), and actor Arnold Schwarzenegger (Commando) spoofs its creators’ own works via the story of a lonely young boy (Austin O’Brien) who discovers a magic ticket and is able, Buster-Keaton-in-Sherlock Jr.-style, to walk into the screen and join his hero (Schwarzenegger) for his latest adventure. While McTiernan’s film is often even more juvenile than its targets, its self-mockery of Black’s ultra-aggressive cop thrillers (in Schwarzengger’s Jack Slater IV) is a major highlight—as is O’Brien’s vision of a uniquely bombastic version of Shakespeare’s Hamlet. (“To be or not to be… not to be.” [MASSIVE EXPLOSION])

There are actually two spot-on movies-within-movies in director Joe Dante and screenwriter Charles S. Haas’ loving tribute to early 1960s B-pictures. The Army brat kids in Matinee are being beaten down by corny live-action kids movies, represented by the Disney-esque comedy The Shook-Up Shopping Cart. That’s why they’re looking forward to the main movie that runs throughout most of Matinee: a monster picture called Mant!, about a half-man/half-ant. Mant! is a road-show presentation, being schlepped around the country by a William Castle-esque impresario (played by John Goodman) who touts the movie’s “Atomo-Vision” and “Rumble-Rama” gimmicks. Mant!’s main gimmick though is the creature itself, which looks just disturbing enough to haunt these kids’ dreams almost as much the Cuban Missile Crisis, which is happening simultaneously with the screening.

“Brock Landers: Angels Live In My Town”
From Boogie Nights (1997)