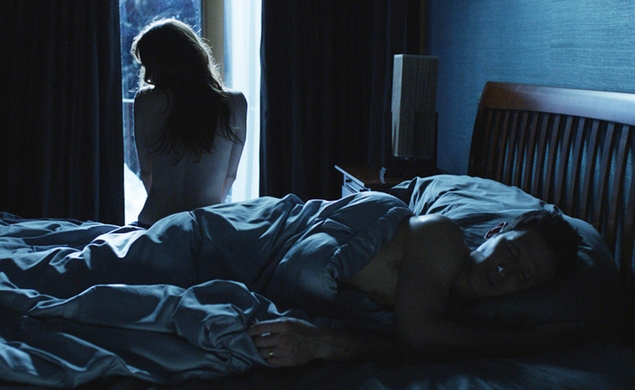 The conundrum of film festivals is that it’s hard to share the experience with other film lovers: A film that premières at Sundance, Cannes, or Toronto may not open in wide release for a year or more, assuming it even gets distribution at all. Joss Whedon just figured out a solution: Immediately following the world première of his latest project, In Your Eyes, at the Tribeca Film Festival in New York, he popped up on the screen via a video, taped on the Avengers: Age Of Ultron set, to inform the audience that the movie they’d just seen was simultaneously being released worldwide.

“I wish I could be there with you, but I’m here with me instead,” said Whedon, who scripted and executive-produced the film through his recently formed production company, Bellwether Pictures. “It’s a very exciting night for us, because it’s not just the première of the film, it is the worldwide release date. Because as of now, In Your Eyes is available on any Internet-capable device at inyoureyesmovie.com, for the thrifty price of $5. This is exciting for us, because we get to explore yet another new form of distribution—and get $5.” The film is Bellwether’s second project, after the 2012 release of Whedon’s black-and-white Shakespeare adaptation Much Ado About Nothing.

In Your Eyes, directed by Brin Hill, stars Cloverfield star Michael Stahl-David and Ruby Sparks writer-star Zoe Kazan as a young man and woman who grow up on opposite sides of the country, occasionally experiencing overwhelming, sometimes physically painful visions of each others’ lives. Eventually, they realize they can talk to each other remotely via their internal connection, and voluntarily see through each other’s eyes. They’re both troubled people, but as they literally share experiences, they each find that the presence of a dedicated, constantly available friend improves their lives and their self-images.

In a Q&A following the screening, producer Michael Roiff revealed further details about the self-release plan: The film, he said, is now available “everywhere in the world,” and in six languages: “English, Spanish, French, Portuguese, German, and Japanese, which we haven’t been able to check at all, because none of us can read that.” The $5 fee for the film covers a 72-hour rental period, not permanent purchase of the film, but he says In Your Eyes will be available at the site “for the foreseeable future,” and that a theatrical release isn’t currently planned. “If there’s demand to see it in other ways, I think we definitely would be interested in what that might mean,” he said. “But right now, the plan is, it’s for people right there. Go watch it.” For those in New York City, as opposed to the rest of the world, the film screens again at Tribeca on Monday night and Wednesday afternoon. See TribecaFilm.com for details.