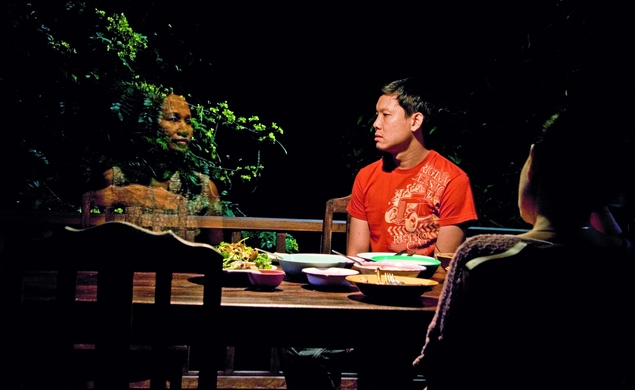 Gabriel García Márquez saw several of his short stories, novellas, and novels adapted as movies before his death yesterday at age 87, and he also worked as a film critic and a screenwriter during his long, distinguished career. (How distinguished? He won the Nobel Prize for literature in 1982.) But Márquez’s lasting impact on cinema may be how his literary style has spread throughout the arts. Márquez was far from the only writer to work in the subgenre known as “magical realism”—and that term itself is a source of controversy among some, who feel it belittles what the books in that mode are really about—but Márquez was one of the most popular and influential writers to employ that style of storytelling, which combines social and political history with trace elements of the supernatural, giving serious subjects the cast of legend. In the decades since Márquez’s 1967 masterpiece One Hundred Years Of Solitude became an international bestseller, many, many movies have done likewise, telling sprawling stories with fanciful tones and heavy hearts. Here are a handful:

The Purple Rose Of Cairo (1985)
Directed by Woody Allen
Allen has made several movies that could be categorized as “magical realist,” including Zelig and Alice, but what distinguishes The Purple Rose Of Cairo is the element of social criticism. Set during the Depression, The Purple Rose Of Cairo stars Mia Farrow as a battered wife who escapes her crummy job and crummy marriage by going to the movies over and over, until one day one of the characters in a Hollywood adventure-romance steps off the screen and falls in love with her. Allen has a lot of fun with how movie-reality intersects with reality-reality, but The Purple Rose Of Cairo makes clear that while the cinema can be a momentary escape, it can’t keep the harsh outside world at bay forever.

Like Water For Chocolate (1992)
Directed by Alfonso Arau
The movie that most cinephiles probably think of immediately when the term “magical realism” comes up is the arthouse hit Like Water For Chocolate, based on a Laura Esquivel novel that is very much in the Márquez tradition. Lumi Cavazos plays Tita, a lovelorn Mexican woman whose emotions sometimes spill directly into her cooking, causing people who eat her food to feel sad, or lusty, or despondent. A sweeping romance that spans generations, Like Water For Chocolate sprinkles in its fantastical moments, always tying them to what’s going on with the heroine, such that they become more an expression of her internal emotions than literal supernatural occurrences.

Big Fish (2003)
Directed by Tim Burton
Strange things happen throughout Tim Burton and John August’s adaptation of Daniel Wallace’s book Big Fish: A Novel Of Mythic Proportions. There are witches, werewolves, giants, and bank-robbers, all crossing paths with a Southern salesman (played by Ewan McGregor in flashback, and Albert Finney in the modern day). But the movie most recalls Márquez in the way it turns one ordinary family’s history into a saga worthy of Homer, where every small success or setback becomes mythic. And at the core of Big Fish is the very idea of storytelling, passed down from one sickly old man to the son who comes to learn the difference between “embellishments” and “lies.”

Uncle Boonmee Who Can Recall His Past Lives (2010)
Directed by Apichatpong Weerasethakul
Nearly all Weersathakul’s films literalize the metaphorical in some way, since the Thai director’s work tends to be aggressively experimental both formally and narratively, weaving dreams, folklore, and modern life into a seamless tapestry. The Palme d’Or-winning Uncle Boonmee Who Can Recall His Past Lives is set in the strife-ridden Isan region of Thailand, and it follows a few days in the life of a dying man, looking back on what he’s done, both in this lifetime and the ones before. In the process, he shares some final moments not just with his living family, but with the ghosts and spirit-forms of those who are gone. It’s a beautiful, haunting film, which makes its own kind of sense as it reflects on the compromises and conflicts that constitute human existence.