The trailer for God’s Pocket, one of Philip Seymour Hoffman’s final films 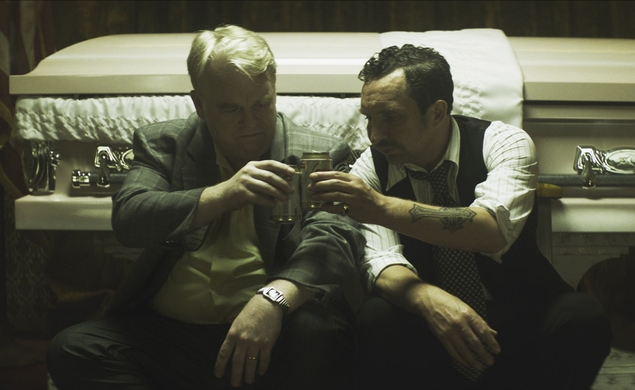 God’s Pocket, John Slattery’s feature directorial debut, drew a mixed-to-negative response at Sundance back in January, with many critics blasting Slattery’s adaptation of Pete Dexter’s first novel for being morose and shapeless, and for squandering a great cast that includes Christina Hendricks as the depressed mother of a recently deceased hoodlum, Eddie Marsan as the undertaker who refuses to bury the boy on credit, and John Turturro and Philip Seymour Hoffman as the small-time crooks who try to get the money for a proper funeral. It’s the late Hoffman’s participation that’s likely to draw the most attention to God’s Pocket, though I also think it’s a better film than the initial wave of reviews have been saying. More on that in a moment; first, have a look at the trailer.

The trail of the tape
Title: God’s Pocket
Director: John Slattery
Screenwriters: John Slattery, Alex Metcalf
Cast: Philip Seymour Hoffman, Richard Jenkins, Christina Hendricks, John Turturro, Eddie Marsan
Release date: May 9, 2014
The entire trailer in one line of dialogue: “He was separated from the meat. I knew that would upset you.”
The entire trailer in one screengrab:

In my Sundance coverage, I compared God’s Pocket to “an interwoven anthology of several 1970s ‘life in the big city’ newspaper columns,” and summed it up by saying, “Slattery and his co-writer Alex Metcalf don’t know what to do with every character in their packed cast—Christina Hendricks, for example, is underused as a mother mourning the death of her racist creep of a son—but as the film jumps from one mildly shady, usually drunk individual to another, it develops such a palpable sense of place that I could almost hear narration in my head, even when there was none.” I think this trailer gives a pretty good sense of what I liked about God’s Pocket—namely its dark sense of humor and its evocation of one working class neighborhood—while downplaying how muddled the plot is. In general, I do suspect that God’s Pocket will draw a better reaction when it comes out next month than it did in Park City; whether that’s because of people mourning Hoffman or not, I think the film earns whatever affection it generates.