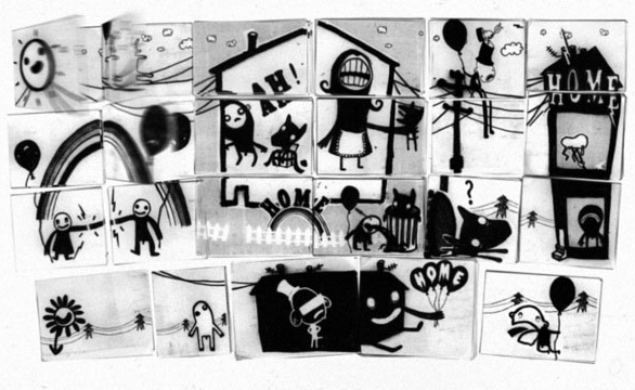 People who write about comics sometimes describe the visual impact of a page or a panel as “cinematic,” referring generally to the use of forced perspectives or off-kilter angles to mimic the way a camera is placed in an especially stylish genre film. Very rarely is the situation reversed, where a filmmaker attempts to draw on the unique properties of comics. When films critics refer to a film as looking “like a comic book,” they’re usually referring to a certain brightness and simplicity in the color and costuming. They’re not talking about a director dividing the screen into sections to recreate the sensation of scanning panels (the way Ang Lee did in his Hulk, or as Brian De Palma has been known to do), or filling a large screen with the intricate action of a Jack Kirby splash-page (as Zack Snyder and Guillermo del Toro have done), or creating a static frame with dozens of whimsical comic details, akin to an early 20th century Sunday newspaper strip (a la Jacques Tati).

The genius of Stephen Irwin’s animated short film “The Black Dog’s Progress” is that it doesn’t just demand that the viewers scan the screen as though they were reading a comic book page; it replicates the feeling of reading some of the more advanced comics artists, like Windsor McKay, Art Spiegelman, Richard Maguire, and Chris Ware. Beginning with one “flipbook” in the middle of the screen—showing a boy who receives a puppy for his birthday, then turns out to be allergic—Irwin gradually adds 23 more of these rectangular frames-within-frames, each repeatedly showing the same action on a loop. But the images do change slightly over time, as the abandoned dog visits each frame and finds one misery after another.

The bleakness of “The Black Dog’s Progress” is a little overwhelming, and saps some of the joy of its creativity. (Irwin has said that the short was inspired by a news item he read about a woman who set fire to the family dog when she couldn’t get rid of it.) But that tone is also in keeping with the work of artists like Ware, who tend to default to pessimism. Anyway, “The Black Dog’s Progress” being such a bummer doesn’t take away from the brilliance of its design, which forces an audience to work a little to know which part of the frame is the most important at any given time, right up to the moment when the whole screen is consumed by animated flames.