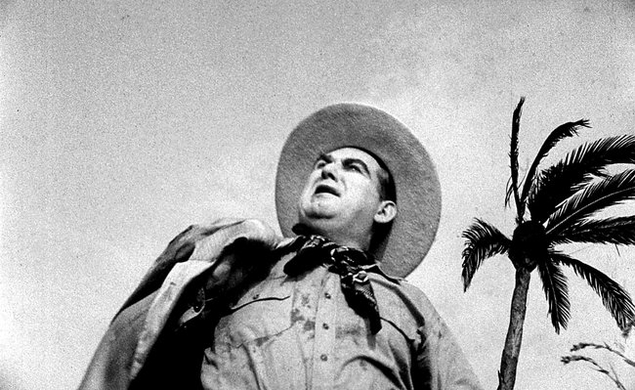 It sounds like a scene from a movie: An early film by Orson Welles, previously lost for decades, discovered in a shipping warehouse in Pordenone, Italy. What’s next? A sled named Rosebud found in the bowels of a mansion near San Simeon?

The New York Times’ Dave Kehr has the incredible story. The film, “Welles’ first professional encounter with cinema,” was made three years before Citizen Kane as a component of a stage production Welles was working on called (don’t laugh) Too Much Johnson. Welles intended each act of the play, starring Welles’ Kane co-star Joseph Cotten as a “frantic womanizer,” to be preceded by short pieces of film he shot himself. But the idea was later abandoned, and the show never made it to Broadway. After finding the footage in the 1970s, and then losing it again in a fire, Welles and the world thought Too Much Johnson was lost forever.

Now, miraculously, it’s been found. After a restoration, the footage will make its première at the Pordenone Silent Film Festival in October. Kehr says that individual stills (like the one above) already make it clear this is the work of Welles:

“The images are unmistakably his, with their strong, close-cropped compositions, powerful diagonals and insistent, ironic use of the ‘heroic angle’—the positioning of the camera to look up at the actor as if he were a statue posed on a pedestal.”

Kehr says that the National Film Preservation Foundation plans to make the footage available online later this year “if the financing can be found.” Please oh please oh pleeeeeeeease let the financing be found.