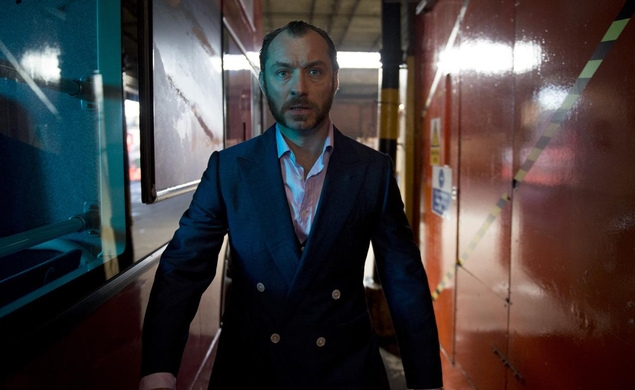 “We found that the median budget of movies that passed the [Bechdel] test—those that featured a conversation between two women about something other than a man—was substantially lower than the median budget of all films in the sample. What’s more, we found that the data doesn’t appear to support the persistent Hollywood belief that films featuring women do worse at the box office. Instead, we found evidence that films that feature meaningful interactions between women may in fact have a better return on investment, overall, than films that don’t.”

“There is, perhaps, only so much to say about a movie that opens with a man delivering a soliloquy about his penis. When you first see the title character of Dom Hemingway, a violent British comedy about a gangster who talks the hard-boiled talk with verve and gutter lyricism, he’s speaking and staring into the camera. His arms are stretched out to the side, Christlike, and while the camera doesn’t show the full monty, the shot is wide enough for you to see that Jude Law has packed on a few pounds to play this flamboyant tough guy and hasn’t taken a Gillette to his chest.”

The Atlantic’s Noah Berlatsky on the most powerful piece of film criticism ever written:

“The greatest film critic ever is James Baldwin… Baldwin is generally celebrated for his novels and (as Ta-Nehisi Coates wrote recently) his personal essays. But he wrote criticism as well. Mostly this was in the form of short reviews. There is, though, a major exception: his book-length essay, The Devil Finds Work, one of the most powerful examples ever of how writing about art can, itself, be art… Published in 1976, the piece can’t be categorized. It’s a memoir of Baldwin’s life watching, or influenced by, or next to cinema. It’s a critique of the racial politics of American (and European) film. And it’s a work of film theory, with Baldwin illuminating issues of gaze and identification in brief, lucid bursts.”

Criticwire’s Sam Adams responds to a recent The Dissolve op-ed on watching movies:

“[Noel] Murray judiciously shies away from devolving into a ‘you’re watching it wrong’ harangue,’ so allow me to say it for him: If you’re not giving yourself to a movie with everything you have; if you reach for the pause button every time you see something that might scare or upset you; if you advertise your purported superiority to a film from another culture or a different era by loudly snickering every time it doesn’t something heightened or unfamiliar; if you stop Schindler’s List for a fucking taco break, you are, in fact Watching It Wrong. If you can’t submit to a movie about the 400-year institution of slavery because you’re worried it might be too upsetting, not only are you watching it wrong, but you should be hit with something large and heavy.”

Plus, the rest of today’s biz-ness:
-An Inconvenient Truth sequel could be on its way
-Ghostbusters’ 30th anniversary celebrated with art shows
-50 Cent joins Melissa McCarthy’s Spy
-Juno Temple and Jesse Plemons in talks to join Black Mass
-16 character posters for The Expendables 3, because 15 wouldn’t have been enough