Magic Mike 2 shooting (and stripping) in the fall 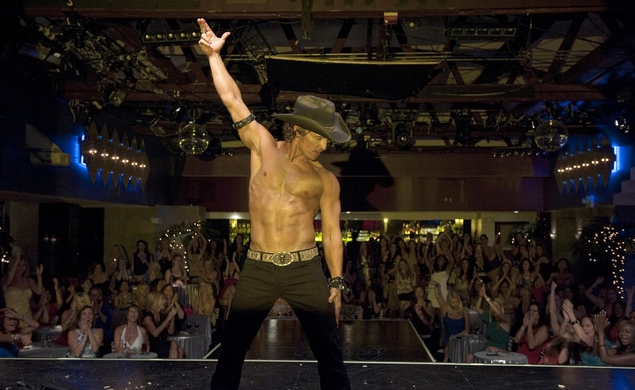 Who would have thought that Magic Mike, a $7 million movie about a bunch of strippers would make Channing Tatum a massive movie star, gross $167 million worldwide, and launch a franchise? Besides Steven Soderbergh and Channing Tatum, obviously, who believed in the project and pushed it through the studio system. Soderbergh has since moved on to retirement (and by retirement, I mean television), but Chan-chan Tay-tay has been working on the sequel, even posting Instagram pictures of himself working on the script next to a bust of co-star Matthew McConaughey.

That was in February. This week, there’s new indications that Magic Mike 2 is moving forward, and could start shooting later this year. Collider spoke with another actor and red-hot piece of man-meat from Magic Mike, Joe Manganiello, as he promoted his new action movie Sabotage. When the topic of more Magic Mike came up, here’s what Manganiello had to say:

“Yeah, it’s gonna happen this fall.  I think they’re going to announce it soon.  It’s crazy.  I didn’t think that would be my first franchise.  I never thought that would ever be the direction of my career.  But that said, it’s just proof that I don’t know best, all the time.  It was the most fun I’ve ever had, and I can’t wait to get back in and mix it up with those guys.”

Manganiello didn’t indicate the direction the sequel might take, but in earlier interviews, Tatum described it as a “road trip movie” that will “essentially be the movie that everyone thought the first one was going to be,” meaning less angst and fewer harsh economic realities, plus even more man-stripping. The details of plot and tone are less important in my mind than the cast and creators. Who’s going to direct if not Soderbergh? (Tatum has hinted that he might.) Will McConaughey, whose career has climbed to new heights in the years since Magic Mike with an Oscar and a string of incredible roles, return as Dallas? And if he doesn’t, who else could possibly fill his shoes (and man-thong)? These are the questions that will need to be answered, and answered quickly if the movie is indeed going into production in the fall.