Op-ed: Why I loved not liking Veronica Mars 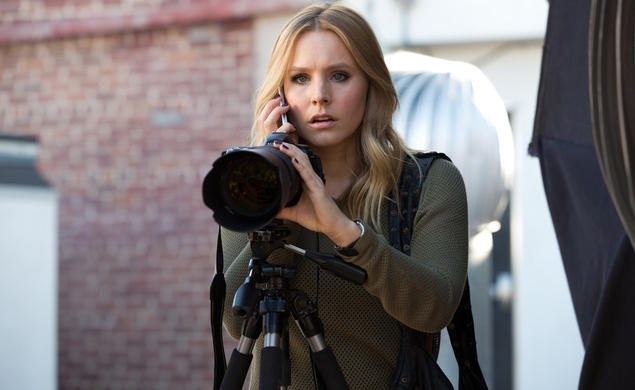 Up until a few days ago, I thought a marshmallow was a delicious treat, served in s’mores or Rice Krispie treats. If someone had walked up to me at a movie theater and said, “Hey, I’m a marshmallow! Are you a marshmallow?” I would have pretended I didn’t hear them and backed away slowly. Little did I know that a marshmallow is also the preferred nomenclature for a rabid fan of the short-lived cult television series Veronica Mars.

I completely missed the boat on this show. It premièred on UPN in 2004, while I was in grad school. By the time I got out, got an apartment, and started watching television regularly again, it was already cancelled. Since then, I’ve heard nothing but good things about Veronica Mars, but you know how it is; it’s hard enough to stay on top of current movies and television series. Like so many other things, it fell through the cracks.

So I went into the new Veronica Mars movie as the opposite of a marshmallow (a graham cracker?). That was sort of the point; all the reviews and tweets I read about the film were positive—and written by fans of the original show. Most had favorable things to say, but most also noted that the movie, funded in large part by the show’s devoted marshmallows through a successful Kickstarter campaign and catered to their obsessive whims, would hold very little appeal for a newbie like myself. They warned that the uninitiated would be bored, or maybe even confused. But how can someone who’s seen Veronica Mars know how someone who hasn’t would react? Curious to learn firsthand, I rented the movie on Amazon. I didn’t particularly like what I saw—which is exactly why I admired it.

The film has some undeniable problems, many of them laid out earlier this week in an excellent feature here at The Dissolve by Scott Tobias. He calls Veronica Mars a “thingamabob;” it’s not quite a television show, not yet a film. It doesn’t look like a movie (or at least not a very good one) and it’s structured like a very long episode of serialized television. And it is, in Scott’s words, a “closed system” with almost no desire to make itself accessible to new converts.

He’s absolutely right. An opening voiceover lays out the basic facts, but plenty of details, including the specifics of the characters’ relationships, remained incomprehensible to me. The core mystery—Veronica’s old flame is framed for murder, she returns to her hometown to clear his name—is strong, but the film takes too many digressions for pointless fan service, like the long high-school reunion sequence that shoehorns in familiar faces from the original series. (I’m guessing; I’m not entirely sure which characters are new and which are old.) Several subplots dead-end into oblivion. (What was the point of the thing with the biker guy and Veronica’s dad?)

If you’re not in the cult already, Veronica Mars will not make you want to drink the Kool-Aid. But in a strange way, I admire the movie more for its inaccessibility. In this time when seemingly every Hollywood movie is designed to cater to the widest possible audience, it’s refreshing to see something that is proudly—even defiantly—the product of a niche.

It’s surely possible to make a more accessible Veronica Mars movie. Cut out most of the dialogue, dumb down the rest, insert a lot of painful, obvious exposition, simplify the mystery, toss out the supporting cast, throw in three car chases and maybe one PG-13-rated sex scene, and you have the formula for a commercially viable Veronica Mars that you could sell to every demographic in every country in the world. That Veronica Mars would be easier to understand—and harder to watch, because it would be drained of everything that makes this quirky, iconoclastic property interesting. I don’t have to get every aspect of its style to recognize and respect that it has a pretty special one.

In his essay, Scott says Veronica Mars violates a core maxim of storytelling by giving marshmallows what they want rather than what they need. As someone who’s actually watched the show, he would know that better than I would. But the feeling I got watching Veronica Mars was that it was as much about the creators’ desires as the fans’. The one thing that really comes through the film loud and clear, even to an unfamiliar viewer like me, is writer/director/producer Rob Thomas’ absolute affection for his characters. He loves spending time with them, and hearing them flirt and spar with one another. That love may have produced a thingamabob, but that thingamabob came from a creatively pure place.

Would I have liked a more visually dynamic and cinematic Veronica Mars movie? Sure. But do I prefer this version that I only sort of understand to one that’s so dumb a baby could follow it? Absolutely. There’s something to be said for a movie that assumes a level of knowledge—or at least intelligence—in its audience. Give me a movie that forces me to pay attention over something I can follow while I play The Simpsons: Tapped Out any day of the week. The world doesn’t need another loud, stupid, pointless mainstream movie. But it could definitely use more projects like Veronica Mars, which was built on creators’ and fans’ passion and dedication. Every film doesn’t needs to appeal to everyone.