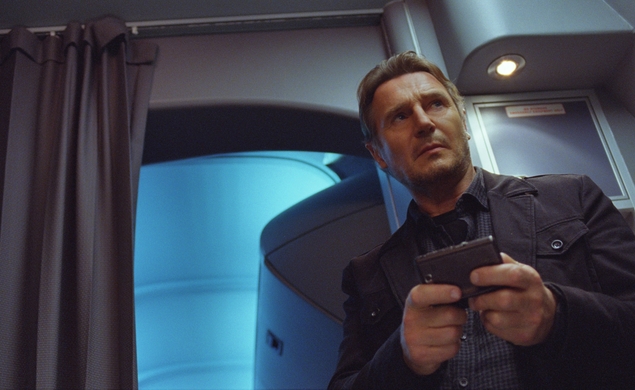 Listen to me carefully: your money is going to be taken (by Liam Neeson). His latest action thriller, Non-Stop, about a U.S. air marshal at the center of a mysterious plane hijacking, is also his latest hit. The film topped the weekend box office with $30.0 million in its debut. That’s off from his last role as a crotchety badass (Taken 2, which made an incredible $49.5 million in its opening weekend), but ahead of other recent Neeson crotchety badass movies like The Grey ($19.6 million) and Unknown ($21.8 million). I want to make a joke about Non-Stop making money non-stop through March, but the reality is that next week is the debut of 300: Rise Of An Empire, which will likely provide it with some stiff competition.

Then again, Liam Neeson already beat Jesus at the box office, so he might be able to take a bunch of Spartan soldiers. Son Of God, a condensed big-screen version of the History Channel’s recent hit mini-series The Bible, came in second place on the box office chart with a $26.5 million debut. That’s way off from the massive $83.8 million opening The Passion Of The Christ had back in 2004, but way up from other recent Bible-themed films like The Nativity Story ($7.8 million) and Jonah: A VeggieTales Movie ($6.2 million), and a solid gross for a movie that already played (in much longer form) on television. It will be interesting to compare its final total to that of Darren Aronofsky’s Noah, opening in a few weeks.

The rest of the box office chart this weekend belonged to older films. The Lego Movie slipped to third place, but still earned $21.0 million more domestically, bringing its one-month total to $209.3 million, and making it the first film of 2014 to cross the $200 million threshold. The popular animated movie featuring the voices of Chris Pratt, Elizabeth Banks, and Liam Neeson (who is apparently the biggest movie star on the planet right now) has now made $330.4 million worldwide, with a sequel on the way. If you can get that damn “Everything Is Awesome” song out of your head, you’re a better person than I.

In a distant fourth place, George Clooney’s The Monuments Men earned $5.0 million over the weekend, bringing its domestic total after one month to $65.6 million. With overseas revenue, the film has made more than $104 million worldwide. It’s easily Clooney’s biggest financial success as a director, and not bad for a movie that cost a reported $70 million to make, but still something of a disappointment. It finished ahead of the fifth place film for the weekend by the slimmest of margins; the other old man action film in the marketplace, 3 Days To Kill starring Kevin Costner, made $4.9 million in U.S. theaters. Its two-week domestic total now stands at $20.7 million. In other words, it’s no Non-Stop.

The highest per-screen average of the weekend belonged to The Lunchbox, Ritesh Batra’s story of an Indian office worker who strikes up a correspondence with the woman making his daily lunches. In three theaters around the country, The Lunchbox made $51,300, for a PSA of $17,100. In second place, Oscar nominee for best Animated Feature Ernest & Celestine opened at one location in the U.S., and earned $15,600.