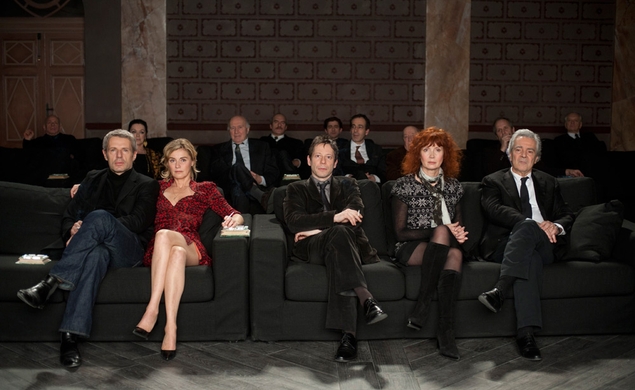 Filmmaker Alain Resnais was already in his 30s by the time the French New Wave really began surging, and he’d already been actively engaged in making politically charged documentary short films (including the 1955 masterpiece Night And Fog, which presented shocking images of the Holocaust in a subdued, dispassionate way that somehow made them even more repellent). Like some of his other older, more intellectual filmmaking colleagues—a group later to be known as the New Wave’s “Left Bank”—Resnais took advantage of the international art-film audience’s fascination with new approaches to cinema at the end of the 1950s and start of the 1960s, and briefly became one of the best-known directors in the world in the wake of his allegorical 1959 romance Hiroshima Mon Amour and his formalist 1961 puzzle Last Year At Marienbad. While Right Bank auteurs like François Truffaut and Jean-Luc Godard were making movies that were alternately raw and playful, Resnais’ early feature films were hard-art, taking the trappings of melodrama and bleeding them of their emotional content. They were also stunningly beautiful, in a way that suggested that the surfaces of people and objects could be more important than what they “mean.”

Resnais died this past Saturday night in Paris, at the age of 91, and even if his career had ended with Last Year At Marienbad, he’d still be mourned as one of the most important and influential directors who ever lived. But his loss stings all the more because Resnais never coasted on his early success. Over the past decade he’s made some of his most vital films, including 2009’s strange and wonderful love story Wild Grass, about aging iconoclasts who find themselves inconveniently drawn together through the contrivance of fiction, and 2012’s You Ain’t Seen Nothin’ Yet, about aging actors who hijack the performance of a play. Resnais had also recently completed the film Life Of Riley, which premiered at the Berlin film festival a few weeks ago. He remained an active and engaged artist, outlasting most of those younger directors who’d transformed cinema along with him.

More importantly, Resnais transformed. He didn’t stay frozen in one place and style like the party guests of Marienbad. He was a well-rounded aesthete, who expressed his love of music and literature and culture through his films, which ranged from the science-fiction experiment Je T’aime, Je T’aime to the meta-musical Same Old Song, in which the characters spontaneously lip-synch to old French pop songs. Defying his early reputation as a “difficult” filmmaker, Resnais brought a real sense of joy and ache to his work over the decades, without ever abandoning his fascination with form. It’s just that in films like 1977’s Providence (about a writer’s internal process as he tries to squeeze his miserable life into his latest book) and the 1993 diptych Smoking/No Smoking (which imagines how the stories of a group of characters could be affected by a just a few tweaks), Resnais fit recognizable human beings into his odd little boxes. In the process, he left behind a body of work that film buffs can analyze intensely if they choose, or just sit back and let happen.