Short Cuts: “Basically,” an artful vivisection of the rich and soul-sick 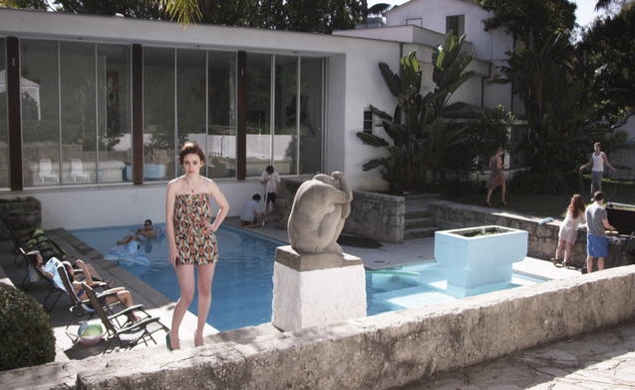 Aster’s short “Basically”—which debuted last year at the New York Film Festival—is a step forward from “The Strange Thing About The Johnsons,” and a different kind of film in multiple ways. Where “Johnsons” gets more grotesque as it goes, “Basically” starts out off-putting and then deepens, becoming unexpectedly moving. And where “Johnsons” is dynamic, “Basically” is static, holding long takes where the camera rarely moves, but where there’s action within the frame on multiple planes. “Basically” is the first of a planned 12-part anthology of monologues that Aster is calling his “Portrait Series,” which, as he puts it, “can be seen as a panoramic portrait of Los Angeles.” The style fits the series. Each shot in this film is a perfect little picture, precisely composed.

“Basically” stars Rachel Brosnahan as an aspiring actress named Shandy Pickles, a spoiled, self-involved know-it-all who comes from a broken (but lavishly appointed) home. In the early scenes, as she’s introducing viewers to her world and her worldview, Shandy seems insufferable: a deluded careerist who thinks she has it all figured out. But scene by scene, Aster undercuts his heroine, usually by showing how disengaged she is with the other, sadder people who live in and take care of her house. Brosnahan, who’s terrific as Shandy, maintains a tricky balance through the first half of “Basically,” delivering her rapid-fire speeches with enough humor to make the character tolerable. She’s rewarded with moments in the second half of the film where Shandy’s façade begins to crumble, and Aster clarifies what it is about acting that Shandy finds not just appealing, but essential. The overall effect of “Basically” is like a distilled version of Bret Easton Ellis’ classic “lost in L.A.” novel Less Than Zero, in which glitz masks creeping rot, and decadence can’t fill the hollow. It’s a hard short to shake.