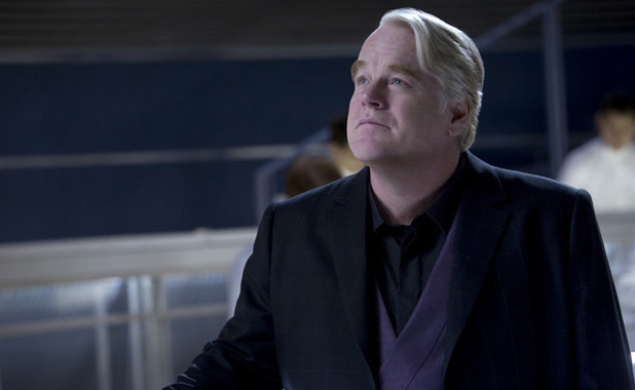 When Philip Seymour Hoffman was found dead this past weekend, after the initial wave of shock and grief died down, the show-business trade publications began asking questions about what would become of the projects Hoffman had yet to finish—in particular, The Hunger Games: Mockingjay, which is the next, two-part installment of the popular adventure series. On Monday, an unnamed source at Lionsgate told The Hollywood Reporter that Hoffman had completed work on all of Mockingjay Part 1 and had only a week of work left on Mockingjay Part 2, but that his unfinished work included a pivotal scene that the film can’t jettison. In that Hollywood Reporter article, Lionsgate played coy with how they were going to work around it, saying only that it wouldn’t be that difficult to do, but that it would be a disservice to the filmmakers, to Hoffman, and to audiences to say exactly which scene is affected and how they’re going to fix it. Elsewhere in the article, it was suggested—just suggested, please note—that some combination of digital recreation and clever editing could be employed.

Today, that “could be” became “will be” in a lot of news items on various movie websites and blogs, due to a New York Post article that cites the original Hollywood Reporter article, with the opening sentence, “The filmmakers behind the Hunger Games movies will digitally recreate late actor Philip Seymour Hoffman in a major yet-to-be-shot scene, sources from the flick said.” The problem is that there’s no indication in the Post piece that these sources are new, since the only direct quotes come from the Reporter. It seems more likely that the Post piece is extrapolating from “this could be done” to “this is going to happen.” (I’ve sent a message to the Post reporter to ask her to clarify; when she replies, I’ll update this post.) [UPDATE: She has gotten back to me and confirmed that The Hollywood Reporter article was, indeed, her source.]

To be fair, it probably is going to happen. The technology exists (and has been used before, fairly unconvincingly, on the movies Gladiator and Iron Cross), and Lionsgate is in a situation where it can’t afford to scrap large portions of a mega-budget movie for the sake of one big scene. And while the idea of digitally conjuring an actor is troublesome, Hoffman’s many fans still (probably) want to see one of his final screen performances. That said, this news remains officially unconfirmed—as it maybe should be, for the reasons the original source cites. Why potentially ruin one of Hoffman’s last roles by drawing attention to the cut-and-paste?