The Dissolve recommends unusual films about love: The Americanization Of Emily 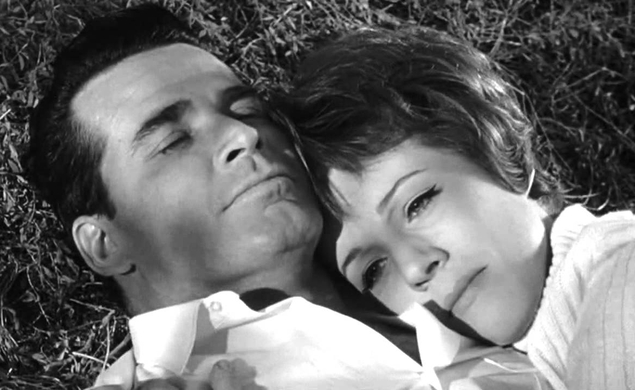 Valentine’s Day is this week, so every day, one Dissolve writer will recommend a film that says something unusual or intriguing about love and relationships. Today, Genevieve Koski talks about The Americanization Of Emily, Arthur Hiller’s 1964 drama about the contentious World War II romance between James Garner as an American Navy orderly, and a very young Julie Andrews as a British women’s-corps volunteer.

Tasha Robinson: Okay, Genevieve, what did you find especially interesting about The Americanization Of Emily’s thoughts on love?

Genevieve Koski: Simply put, the way it romanticizes pragmatism. But really, it’s a lot more complicated than that, which is actually what I like about this movie—it eschews easy, pat definitions of big, loaded ideas like valor, honor, and, yes, love. The Americanization Of Emily is really more effective as an anti-war film than as a romance, which is probably why it never appears on lists of romantic movies, but the idea of war as a romantic idea dovetails with the central love story in a way that shines light on how much stupidity is inherent in both. It certainly isn’t the first time love and war have been equated, but it may be one of the most cynical—yet strangely uplifting—comparisons of the two.

The film, set during World War II, stars James Garner as a charismatic “Dog Robber,” a personal assistant responsible for keeping his assigned admiral happy and supplied with clean clothing, fine food and booze, flirtatious women, and other such morale-boosters apparently required by American soldiers in London in 1944. He’s a good-time Charlie, basically—his character is even named Charlie!—which places him philosophically at odds with war-widow Emily, played by Julie Andrews, who’s offended by his laid-back, wasteful approach to life and war. That doesn’t stop her from falling in love with him, though, leading to some twisty conversations about the sentimentality of war—the supposed virtue in going off to fight other men’s battles, or the nobility of a widow mourning a soldier she barely had time to know—made even twistier by Charlie’s penchant for sarcasm and irony. (It doesn’t sound like it from this description, but The Americanization Of Emily is a very funny, modern-seeming film.)

Emily and Charlie’s romance, combined with a plot that places him in a stupidly dangerous situation, forces them to confront their different ideas of what constitutes courage; explaining how the divide is resolved would be giving away too much of what makes the film delightful, but I will say that it’s both swooningly sentimental and incisively practical. What’s more romantic than that?

Tasha: I think that depends on your tastes—there are definitely people out there who would say romanticism without built-in pragmaticism is more romantic, just like hot milk without cocoa powder in it is by definition more milky. But I’ll take the hot cocoa any day. Which is my way of saying I think this film’s blend of elements goes together perfectly. It’s such an unusual blend, though. It’s set in the 1940s, and shot and directed and largely written as if it’s a 1940s war drama, complete with black-and-white cinematography. But then elements of a 1960s sex romp creep in, with Emily calmly discussing her many one-night stands with soldiers, or Charlie repeatedly finding naked ladies in his buddy’s bed. And where the camera would discreetly fade to black for an implied love scene in a 1940s picture, it keeps eagerly watching as Charlie and Emily get hot and heavy. The movie kept surprising me, because I expected it to be one genre, and the filmmakers kept slipping in unexpected things. And in the same way, it completely upends the idea of war glory and war heroism over and over, with Emily repeatedly praising Charlie for cowardice, and saying that’s what she loves him for. It’s an unusual movie in so many ways.

What took me most by surprise, though, was the moment where Charlie calls Emily a bitch during a fight. The kind of name-calling that’s normally childish and petulant feels earned here, because she’s deliberately, consciously being cruel to him over things he can’t control—and at the same time, being cruel to herself over the emotions she can’t control. The complexity of that scene, for both of them, really grabs me. It really captures the way strands of selflessness and selfishness get tangled up in a relationship. What surprised you most about the film?

Genevieve: Besides the chemistry between Garner and Andrews, an effective romantic pairing I never would have considered, I’d say the unpredictability you mention is the most surprising thing; I was never sure what kind of movie I was watching until it was over, and I’m still finding it hard to summarize in any neat, succinct manner. Even with Andrews’ character being name-checked right there in the title, the love story between Charlie and Emily ends up being more of a framing device for a story somewhere between an anti-military screed and a deft farce. I didn’t know Paddy Chayefsky wrote the screenplay until after I’d finished watching, but it seems so obvious in retrospect. It’s a romantic comedy in the broad strokes (and on the movie poster), but its satirical bite and deep humanism makes it something much more complex than its lively, entertaining surface might suggest.

Tasha: Speaking of that title, it’s a complicated joke: Emily spends the whole movie refusing to be Americanized, and speaking firmly about her opinions on the matter. By the end, in fact, she says she’s made Charlie into a proper Brit. Which is par for the course in a movie where she keeps calmly taking control: She decides they’re going to have sex, and pursues it; when Charlie gets chatty, she says “Shut up and let me kiss you.” Everything about her character strikes me as amazing for a woman in a romance in that era: Her frankness, her bawdiness, her mastery of her relationships, and her lack of sentiment, especially when the film veers into melodrama territory. It’s rare to see a film romance today where the female lead has this kind of unapologetic, no-nonsense agency, much less with such a disarming sense of humor about it.

Genevieve: Another interesting thing about Andrews’ performance here: It was her first non-singing film role. That may not seem like that big a deal these days, but it was notable in 1964, right after Mary Poppins introduced her to the world at large. Prior to that, she’d been known mainly for her stage work, for starring in TV adaptations of Rodgers & Hammerstein productions, and for English voiceover work for an Italian animated film called The Singing Princess, which credits her as “The magic voice of Julie Andrews.” Bosley Crowther’s hilariously qualified rave review of Emily begins, “If you can stand watching Julie Andrews playing a role in which she doesn’t sing… then nothing should deter you from going as swiftly as you can to see The Americanization Of Emily.” Frankly, there are places in the film that could have been stretched to accommodate a singing performance from Andrews, but I’m glad it doesn’t take that liberty, even if it might have gotten more butts in the seats when the film came out. Emily’s character is interesting for all the reasons you mention, but especially as filtered through Andrews’ performance, which evokes all the buttoned-up discipline of Mary Poppins, but with a nice wash of sentimentality and warmth. It plays well against Garner’s roguish cowboy style, and both really personify the divide between British and American mentalities that the film turns on.

Tasha: This recommendation series is specifically looking for what the movies we’re recommending say about love—what the takeaway is. This movie has a particularly heavy, pointed message that’s hard to miss, about what a waste of human life war is, and how even when it’s absolutely necessary to go to war, it’s never necessary to glorify or romanticize it. The ending walks that message back a little, as the characters decide sure, why not romanticize war, if they get something meaningful out of it? It’s such a strange series of messages and contradictions, and it plays mostly because it prioritizes a happily-ever-after ending over any other concern. But speaking for yourself, what did you get out of the film’s messages? Does Americanization Of Emily say anything particularly universal about love, or is it too tongue-in-cheek and era-specific for that?

Genevieve: I think the most universal message to take away is that love can be a transformative experience, and force you to confront beliefs or biases you held that may not mesh with your partner’s, or even just the state of being in love. It’s easy to be the obstinate, contrarian maverick (you see what I did there?) when you aren’t living for anyone but yourself, but acquiring someone else in your life that you want to live for tends to soften those hard lines, or erase them completely. Or, as Emily puts it in the scene where she and Charlie decide to get married, it makes you “sticky,” an odd choice of terminology that nonetheless evokes the complicated, often messy state of being in love. That other person—along with their lifestyle, their beliefs, their flaws, and their mistakes—sticks to you, and they can change you whether you want them to or not.