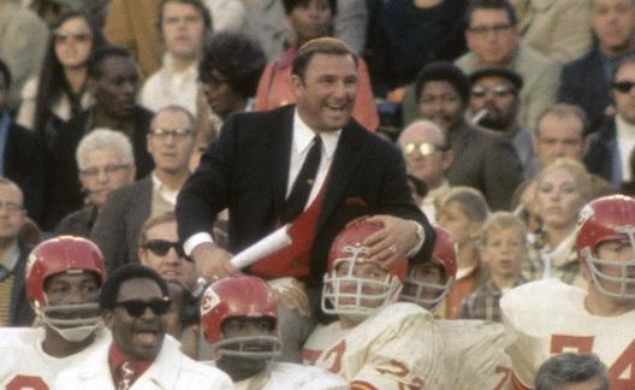 Here’s how definitive the NFL Films’ 1970 mini-documentary on Super Bowl IV is: Tapes of the actual network broadcast of the game between the Kansas City Chiefs and the Minnesota Vikings still exist, and yet whenever a TV sports reporter or commentator today puts together a package about Super Bowl IV, the clips rarely come from the game as it originally aired. No, the cultural memory of Super Bowl IV is defined by what NFL Films shot—and in particular the footage of motormouthed Chiefs coach Hank Stram, pacing up and down the sidelines, talking strategy to anyone who’ll listen.

Super Bowl IV isn’t the only football game that NFL Films has frozen in time. In the days before wall-to-wall sports coverage on TV, Ed Sabol’s little mom-and-pop company—largely run by his son Steve—packaged the most memorable plays and the general atmosphere of big football games into short films that aired on television periodically, but were also available for rental to schools, churches, summer camps, men’s clubs, families, and any organization that might have a projector and an interest in football. In the early days especially, these films were honest-to-goodness films, relying on lyrical slow-motion shots, acid-funk soundtracks, and the stentorian voice of narrator John Facenda to build a mood. Half documentary and half impressionistic art-piece, the best NFL Films productions make the sport look beautiful, not brutal.

They’re also, not incidentally, fairly instructive about football. That’s where Super Bowl IV comes in. “Super Bowl IV” is best-known for its footage of Stram: politely complaining about the referees’ accuracy in spotting a football (“He definitely gave them an extra foot. Bad. Very bad.”); chuckling gleefully over the success of his play-calling (“No way they can cover that stuff… That stuff in front is like stealing!”); and talking up his choices to his players and assistants alike (“65 Toss Power Trap… that might pop wide open, rats!”). Then Facenda’s voice comes in and explains Stram’s plays, pointing out how the Chiefs’ varied offensive formations, screen passes, and unpredictable reverses had the Vikings’ defense confused and scrambling. These explanations hearken back to the original purpose of “game film,” to give coaches a way to study teams and to show players how to win against their opposition.

The difference is that NFL Films productions are aimed at fans—and even at non-fans—and so the writers, cameramen, and editors contextualize the analysis. The Super Bowl IV film begins by explaining how Stram’s “progressive theories” on play-calling had led to the 1969-1970 Chiefs being dubbed “Hank Stram’s Wild West Variety Show.” By emphasizing Stram’s big personality and colorful slang—enhanced with somewhat clumsy ADR of “players” and “coaches” agreeing with Stram—NFL Films reduce the complexity of football’s Xs-&-Os to one fun-loving guy. At the end of the film, over shots of a Vikings cheerleader crying and the Chiefs carrying Stram off the field, Facenda says that defeat is personal but that victory belongs to everybody. By letting fans see how Stram operated, NFL Films gave the game back to the people, showing that standing on the sidelines with a clipboard could be as cool as catching a touchdown pass.