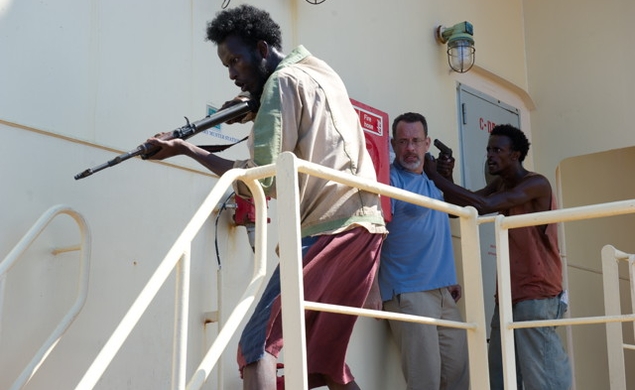 The 51st New York Film Festival will open with the world premiere of Paul Greengrass’ Captain Phillips, starring Tom Hanks as the commanding officer of a cargo ship that was hijacked by four Somali pirates in 2009. From the official press release, here’s new festival Director of Programming (and film critic and historian) Kent Jones on his first NYFF opening night selection:

“Captain Phillips is a riveting experience. At this point in his working life, Paul Greengrass has become a master of immersive reality-based narratives set along geopolitical fault lines–in this case, the 2009 seizure of the Maersk Alabama cargo ship by four Somali pirates. I’m excited that this tough, tense, real-life thriller, capped by the remarkable performances of Tom Hanks and four brilliant first-time Somali actors (Barkhad Abdi, Faysal Ahmed, Barkhad Abdirahman and Mahat M. Ali), is opening the 51st edition of the festival.”

Greengrass was last featured at the New York Film Festival in 2002 with his film Bloody Sunday. At the Film Society of Lincoln Center’s website, Greengrass talks about what the selection means, and gets into a frank conversation about the state of big-budget Hollywood filmmaking, and whether mainstream movies are now determined and controlled by studio marketing departments:

“Two years ago when we started talking seriously about Captain Phillips, what they saw in this story is a film that would reach an audience, and a broad audience too, both in the U.S. and around the world. They had a choice in this film whether to make the best version of the film or do one without much worry about the storytelling. They could have taken the easy road. I absolutely didn’t do that. Their deepest desire is to do things that are popular, reach audiences, and that are good. They don’t want to do films that aren’t good because, in the end, everyone wants to do their best work. And they’re prepared, in my experience, to go the extra mile and then some.”