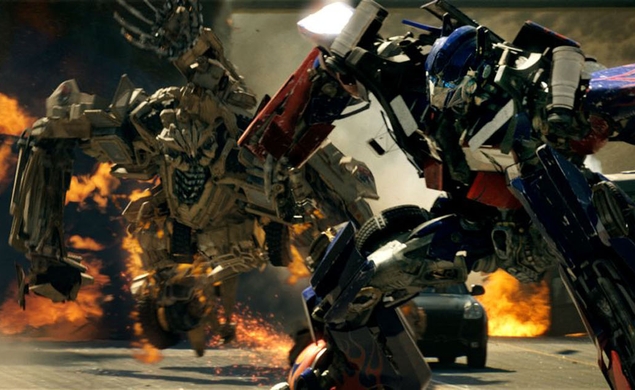 While shooting Transformers: Age Of Extinction in Detroit last month, Michael Bay told Yahoo! Movies U.K. what to expect from this fourth transforming robot movie. Age Of Extinction, he promised “is a much more cinematic one. I focused on keeping this one slick. There won’t be any goofiness in this one. We went a bit too goofy” in the last installment. Call it “a new chapter,” but watch your language otherwise: “It’s not a reboot. This movie lives in the history of the Transformers movies, and this one starts three years after the last. It feels fresh.” So why, after saying he was done, did he come back for one more? “It was the Transformers ride [at Universal Studios]. It was seeing this two-and-a-half hour line, with all these kids lined up.”

Yahoo! also spent time with Bay’s effects guy, John Frazier, who claims at least 50 percent of each Transformers is full of “practical,” non-CGI effects. “He can’t hear right because he’s done so many explosions,” Bay boasts. “We still hold the Guinness World Record for Pearl Harbor: John rigged 350 bombs in seven seconds. Nowadays I think you would fake a lot of it.” Highly cinematic new franchise star Mark Wahlberg added that “the human element” was what really attracted him to the project. No script was needed to get him onboard, though: “I had a great time working with [Bay] on Pain & Gain, and he asked me to come back, so I said, ‘Absolutely.’ The idea of playing a dad to a teenage girl–those are issues I’ll be having to deal with sooner rather than later, whether I like it or not.”

In a recent producers’ roundtable, the Entourage mogul let slip a little more about why that TV series took so long to get greenlit as a movie by way of explaining how many Transformers films he was signed on for: “Everybody’s saying it was all about money. It wasn’t, necessarily. It was really about fairness, and what I was trying to communicate to the guys was, ‘This is an important movie for us to do at a price.’ And then if the movie is successful, like Sex And The City, there’s a lot of opportunity on the upside. You know, doing Transformers, I definitely had to sign up for three. Does that mean we’ll make three? No, it doesn’t.”