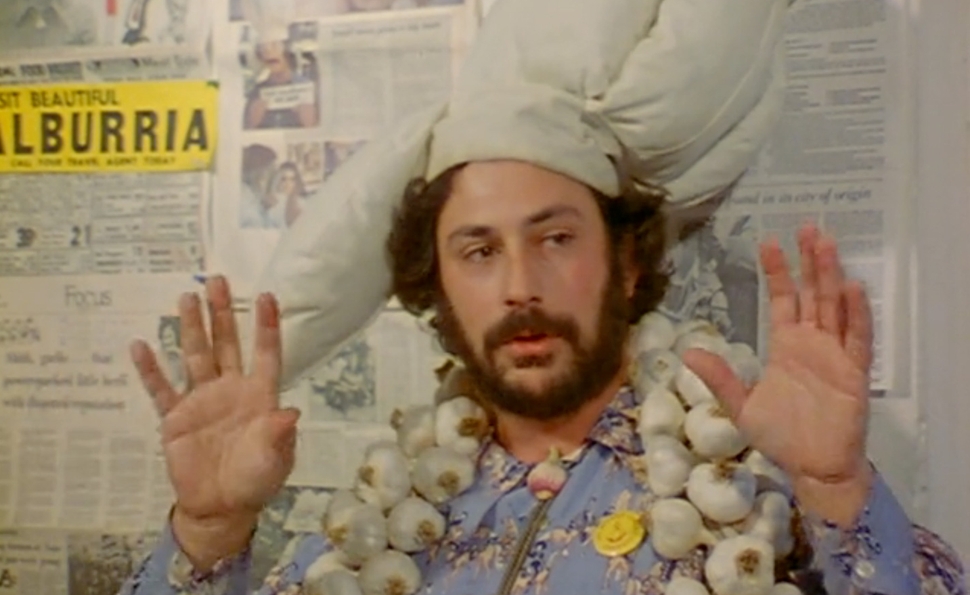 “Garlic Is As Good As Ten Mothers”

When a great artist dies, especially one whose work has slipped out of the public eye, the natural impulse is to play catch-up; nothing motivates like a well-written obituary. But curiosity sparked by Les Blank’s death in April quickly hit a wall. Of the more than three dozen films Blank made in his 40-year career, only one was then in print on DVD: 1982’s Burden Of Dreams, shot during the filming of Werner Herzog’s Fitzcarraldo. (Arhoolie’s J’ai Été Au Bal and “Chulas Fronteras” have since come back online.) Blank’s company, Flower Films, stocks many more, but their price tags put them out of reach for all but the most dedicated fans.

Enter the Criterion Collection’s Hulu Plus channel, which in recent weeks has added half a dozen Blank short films: “Always For Pleasure,” “The Blues Accordin’ To Lightnin’ Hopkins,” “Dry Wood,” “Garlic Is As Good As Ten Mothers,” “Spend It All,” and “A Well Spent Life.” Throw in Amazon Instant’s modest rental of Blank’s final film, All In This Tea, and you have the makings of a substantial retrospective.

Since the other five Hulu films are all of a piece, it’s best to start with 1980’s “Garlic Is As Good As Ten Mothers,” which hangs together better than some of Blank’s more loosely structured films, but also subtly puts his whole oeuvre in context. The subject, ostensibly, is garlic, which in 1980 was apparently still something of an exotic ingredient. But as in many of Blank’s other movies, it’s mainly a pretext to get a wide range of people talking on a subject they’re passionate about. Black barbecue chefs and an Italian cookbook author share their secrets for using the stinking rose, while Blank’s camera pushes in so close to a simmering pan, viewers can practically smell the fumes. (In his ideal scenario, the film would be screened with several heads of garlic roasting in the back of the theater, so its scent would slowly fill the room.) Unidentified men and women share equal footing with Alice Waters of the storied Bay Area restaurant Chez Panisse, whom Blank leisurely watches prepare a course for an all-garlic feast.

Errol Morris, whose wager was the impetus for Blank’s “Werner Herzog Eats His Shoe,” once told me that Chez Panisse was as important to Bay Area cinephiles as the Pacific Cinematheque or the Telluride Film Festival are to their respective locales, and Blank’s films share the philosophy that many different forms of culture spring from the same root. It isn’t wrong to say that “Always For Pleasure” is about New Orleans’ jazz funerals, or that “Spend It All” is about Cajun music, but it’s insufficient. Food, music, history, and land are all of a piece, each embedded in and inextricable from the others.

Some of Blank’s movies are more conventionally character-driven than others: All In This Tea focuses on David Lee Hoffman, whose obsessive quest for the world’s best teas finds him strolling through Chinese markets, sniffing handfuls of dried leaves from men and women who crowd around him with plastic bags full of their wares; “A Well Spent Life” profiles blues singer Mance Lipscomb, and the subject of “The Blues Accordin’ To Lightnin’ Hopkins” is self-explanatory. But Blank is too curious (or too impatient) to stick with any of them for too long. “A Well Spent Life,” which goes nearly half its length before identifying Lipscomb as anything other than a rural farmer, devotes a substantial chunk of time to the story of a physically abusive neighbor who became more even-tempered once his wife shot off his leg. 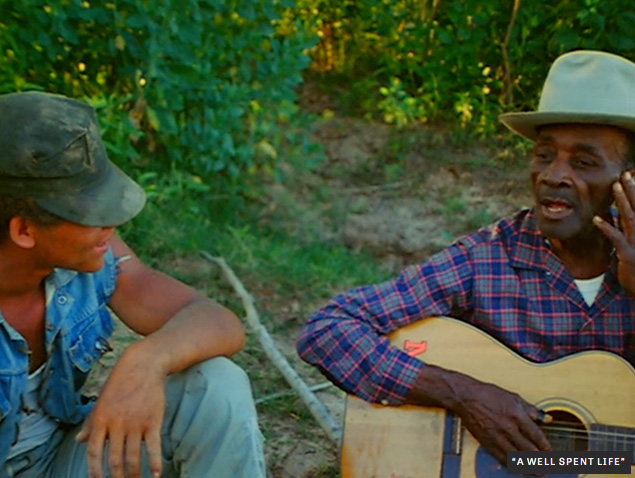 Although Lipscomb’s music is often heard in “A Well Spent Life,” and he eventually discusses how the blues boom of the 1960s transformed his life, Blank isn’t interested in him as a historical figure. The history that concerns Blank, apart from the rare explanatory onscreen text, is personal: Lipscomb talking about growing up under the repression of white bosses, or his wife recounting how Lipscomb once came home late for dinner, and they’ve eaten in separate rooms ever since. “You can’t get lonesome, you know, when you’re eating,” Lipscomb says.

Lightnin’ Hopkins’ music plays a more central role in “The Blues Accordin’ To Lightnin’ Hopkins”; there’s a mesmerizing scene near the end where he plays slide guitar with a pocket knife, leaning back so far, he’s almost vertical. But Blank sometimes cuts away from Hopkins to show a chicken scratching in the dirt, or films him playing in front of a barnyard fence as people circulate around him. Likewise, when the soul singer Irma Thomas turns up in “Always For Pleasure,” it’s in the middle of a monologue about the use of bay leaves in cooking. Music is part of life, but only one of many.

In Les Blank’s movies, everyone is a philosopher, and everyone’s an expert, at least on the subject of themselves. He loved the mass jubilation of public celebration and the rich, earthy tones of 16mm stock. And to judge by the way the image recurs in several of his films, he especially loved to zoom in close on a hot, bubbling skillet, so close that it seems as if his camera might get deep-fried along with the chicken. Think of his movies as simple but generous dishes made with love and care, their flavors too complex to pin down any one ingredient.