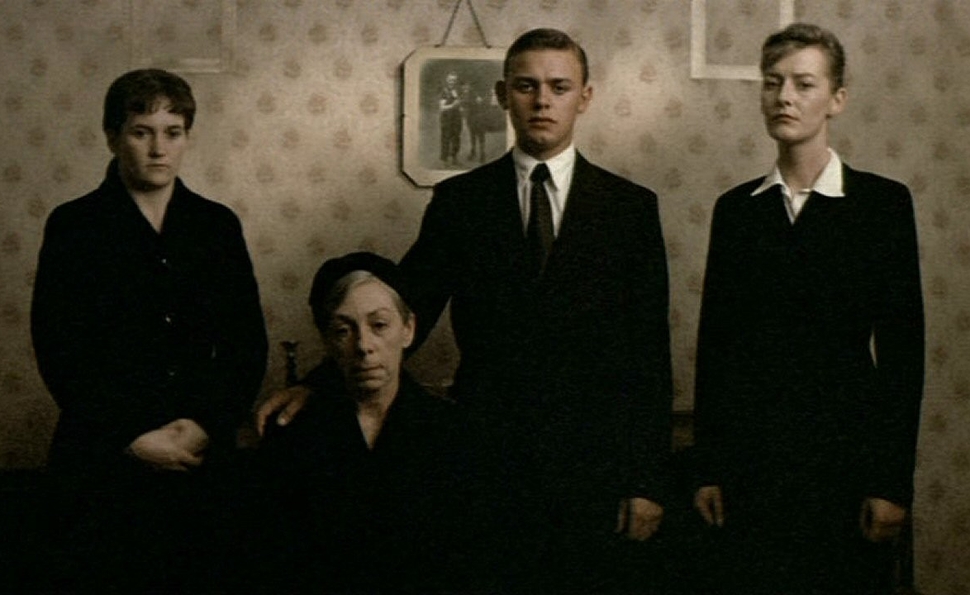 It’s often said that there are directors who make many films, and those who make the same film many times, forever searching for the ideal expression of a single underlying theme. What’s striking about the early work of Terence Davies—the three short films collected as The Terence Davies Trilogy and his first feature, Distant Voices, Still Lives—is the way he does both, using radically different techniques that nonetheless produce eerily congruent results. He’s a hedgehog in fox’s clothing.

The Terence Davies Trilogy, composed of the short films “Children,” “Madonna And Child,” and “Death And Transfiguration,” itself represents a number of variations on a theme. Although they were released over a period of seven years as Davies was making his way through drama and then film school—while working a soul-killing job as a bookkeeper that inspired the teary opening of “Madonna And Child”—the Trilogy’s parts resonate with and amplify one another. (It’s been treated as a unified work since 1984.) There’s a predictable progression of technique, especially between the first two parts, but the films themselves move so fluidly and unpredictably through time that the distinctions between them blur, especially as they live on in memory.

Even without the confessional commentary track on the British Film Institute’s DVD, which treats Davies like the national treasure he is, the Trilogy feels like a nakedly autobiographical work, notwithstanding that fact that its protagonist is called Robert Tucker. The early scenes of a young boy being savaged in a boarding-school courtyard, and Tucker’s longing gaze as a man showers next to him at a public pool—these feel in some ways like the standard diaristic transcriptions of a first film. (Although in 1976, such depictions of queer desire were hardly commonplace.) But the way Davies moves between them, melding different versions of himself into one present-tense entity, feels less like an attempt to simply tell his own story and more like a way of transcribing his own consciousness. Events from his life surface not chronologically or through a haze of reminiscence, but abruptly and in sharp focus, in the manner of past traumas that are never far below the surface.

Davies, who renounced his Catholic faith when he was 22, likes to say that being gay “ruined my life,” which may be something of a provocation, but is borne out by the Trilogy’s relentless despondency; on the BFI disc, he chuckles as he recalls the critic who said the films made Ingmar Bergman look like Jerry Lewis. Already suffused with self-loathing, the films grow darker as they take on Davies’ relationship with his brutally abusive father, and positively Stygian when, in “Death And Transfiguration,” he stages what amounts to a vision of his own end. In one of his final roles, veteran actor Wilfred Brambell plays out the wordless last moments of Davies’ alter ego, down to the death rattle and the wide-eyed stare into the void.

Five years later, Davies filled that void with Distant Voices, Still Lives, which replaces the Trilogy’s stark black-and-white with soft, muted colors. (Davies used a coral filter and the then-new bleach bypass process to narrow the film’s palette.) “Distant Voices,” the film’s first half, is dominated by the terrifying figure of Pete Postlethwaite as the father, a simmering brute so consumed with hatred, it seems like a mere formality when cancer corrodes his insides. (According to Davies, Postlethwaite had a hard time believing that the man his character was modeled on once beat his daughter with a broom until the handle broke; Davies had his sister confirm the story.) Davies narrows his nine siblings to his eldest brother (Dean Williams) and two sisters (Angela Walsh and Lorraine Ashbourne), as well as his fearful, long-suffering mother (Freda Dowdie). Although Davies meticulously re-created the details of his childhood—or as close as he could get on a first-timer’s budget—the movie feels less like a period piece than a theatrical restaging, each frame as neatly laid out as a first-act set, the street beyond the house’s front stoop merely a wash of diffuse white light.

With no onscreen proxy to funnel his memories through, Davies uses songs as a trigger, especially in “Still Lives,” which takes place after the father’s prolonged but insufficiently painful death. It takes no more than a word, and sometimes less, for the characters to burst into “How Ya Gonna Keep ’Em Down On The Farm?” or “My Yiddishe Mama,” popular ditties that serve as collective entertainment, and sometimes an unconscious statement on the characters’ frame of mind. Although it isn’t written into the film, it’s clear that these songs are triggers for Davies, keys for emotions kept in fragile boxes, their delicacy a stark contrast to the physical and emotional violence onscreen.

According to Davies, many of the most shocking moments of Distant Voices, Still Lives occurred just as he shows them: His father really did force two of his children onto the streets of London to sell firewood during the Blitz, and after they were caught in an air raid and made their way to a bomb shelter, he really did slap his young daughter and force her to sing “Roll Out The Barrel.” (A similar moment of shellshocked communion figures in Davies’ most recent film, The Deep Blue Sea.) But more important than the fact that such moments are true is that they feel true, that Davies gives them lyricism and shape rather than bluntly insisting, “See, this happened.” In its own way, Distant Voices, Still Lives is as harrowing as The Terence Davies Trilogy, and there are moments when it feels like viewers are simply watching the same scene from a (very) different point of view. But where the Trilogy’s governing emotion is despair, Distant Voices is suffused with a kind of melancholy hope, the sense that time washes away the bad as well as the good, and that death seals no door that the right song can’t crack open.