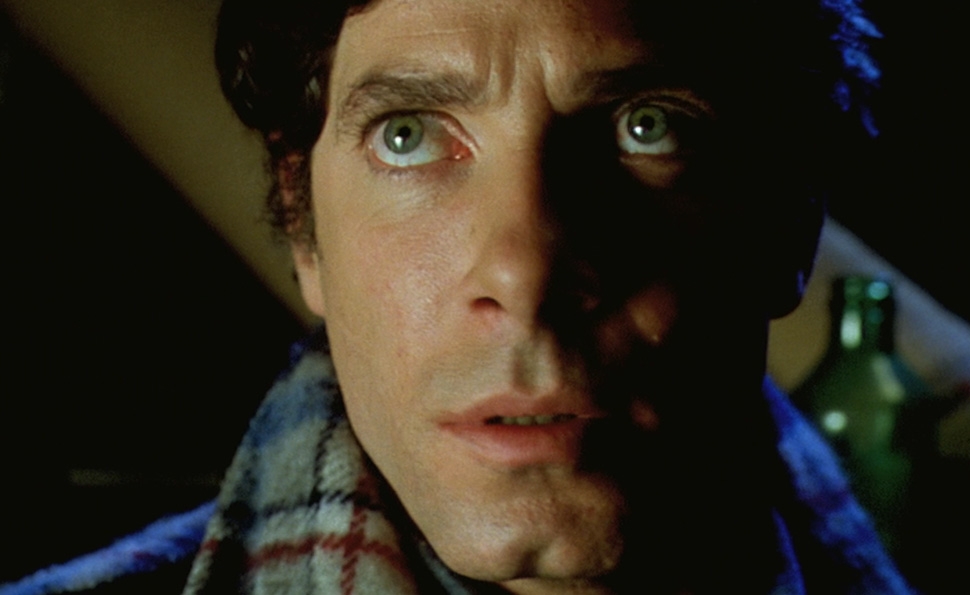 Although David Cronenberg has diversified somewhat in the years since eXistenZ, he spent the three decades between 1969 and 1999 engaged in one of cinema’s most sustained explorations of a single theme: the relationship between human desires and the structures we build to realize them. But for a good many years in the middle of that period, after the experimental but rarely seen Stereo and Crimes Of The Future, and before the defining breakthrough of Videodrome, Cronenberg looked to most like an aspirational genre director, a bloody-minded craftsman squatting on the line between science fiction and horror. Roger Ebert, for one, dismissed The Brood, Cronenberg’s first out-and-out masterpiece, as “an el sleazo exploitation film” in which “hardly anything of interest happens until the last 15 minutes or so.” Opinions differ and hindsight is 20-20, but considering that the movie’s first 15 minutes include a scene in which a kindly grandmother is beaten to death with a meat tenderizer by a deformed dwarf, “of interest” seems like the least of it.

The Brood—which, like Cronenberg’s follow-up, Scanners, is out of print on DVD, but available on demand, and in high-def, through Criterion’s iTunes store—is simultaneously one of Cronenberg’s most engrossing movies and one of his most repellent. That’s less because of its gory visual effects than its poisonous emotional undertow. Cronenberg later revealed that the story of housing contractor Frank Carveth (Art Hindle, nondescript but for a fantastic head of wavy 1970s hair), who learns that his wife’s psychotherapy is unleashing dark forces within her, was inspired by his divorce from actress Margaret Hindson, and the battle over custody of their young daughter. Consequently, a vein of splenetic score-settling, as well as simple misogyny, runs all the way through it. (Cronenberg’s daughter with Hindson is named Cassandra; the towheaded tot who sees her granny’s skull split open in The Brood is called Candy.) But The Brood’s metaphysical abstractions notwithstanding, Cronenberg channels those feelings openly, the way Sam Peckinpah built his deeply troubled ambivalence about male and female archetypes into his work. There’s nothing self-critical about The Brood—indeed, Cronenberg later said he found the film’s brutal conclusion “deeply satisfying”—but there’s a kind of unrestricted purity to it, as if Cronenberg and his camera achieved the kind of psycho-mechanical fusion so many of his characters pursue.

In Rabid and Shivers, the characters’ bodies are reshaped by external forces, but in The Brood, to paraphrase the latter film’s drive-in-worthy alternate title, the transformation comes from within. Oliver Reed plays the charismatic, domineering therapist Dr. Hal Raglan, whose method, which he calls Psychoplasmis, involves coaxing patients to manifest their inner turmoil on the outside. (His bestselling book is called The Shape Of Rage; the cover shows a pair of lips floating atop an angry scribble.) In the first scene, Frank watches from the seats of a darkened amphitheater as Dr. Raglan coaches a patient (Gary McKeehan) through the process, role-playing his psychologically abusive father until his skin erupts in red, suppurating welts. Later, in a strangely antic scene that tilts the movie away from its overwhelming sobriety, a former patient (Robert Silverman) shows off a gill-like lymphosarcoma that hangs from his neck—the product, he says, of his body being taught to attack itself.

At the center of The Brood’s hatred is Samantha Eggar as Frank’s estranged wife, Nola, a wild-eyed, wild-haired creature consumed by rage too powerful for her to confront on her own. It’s established early on that she was herself the victim of childhood abuse, beaten by her mother while her father stood by, but this revelation makes her more monstrous, not more sympathetic. Estranged or no, it’s hard to imagine a more bitter dismissal than the way Frank describes Nola to his daughter’s preschool teacher (who is, of course, a young and pretty thing): “She married me for my sanity, hoping it would rub off,” he says. “Instead, it worked out the other way.”

The Brood is about psychological illness, but it’s also consumed by it, as much a product of Cronenberg’s rage as—well, that would be telling. Scanners, which followed two years later, is a more controlled movie, and an immeasurably less interesting one. Rather than a personal exorcism in genre-film garb, Scanners is a stilted riff on a pre-fab form. (Though it may not be fair to hold this against the film, it seems appropriate that it’s the only one of Cronenberg’s movies to spawn multiple cut-rate sequels.) Not only is its plot creaky and convoluted, but—a real rarity for Cronenberg—it’s conceptually weak, with no firm grasp on its central conceit. Phrasing telepathy not as mind-reading but “the direct linking of two nervous systems separated by space” is a classically Cronenbergian twist, except that sometimes the titular psychics can read minds, and at other times they can use their powers to set people on fire, or throw them across rooms.

The gaping void at Scanners’ center isn’t a function of plot or conceptual weakness, though: It’s the astonishingly flat, inept performance of Stephen Lack, who makes Rabid’s Marilyn Chambers look like Sarah Bernhardt. Although he’d made a handful of films before, Lack was and is a painter, and he’s totally unequipped for the high style required to make the shots of him staring intently while his mind does its work look anything other than ridiculous. The haunted quality around his eyes might have drawn Cronenberg in, but the miscalculation does irreparable damage to a film that can’t withstand it.

There is an astonishing—in a good way—performance in Scanners, but it’s Michael Ironside as the bad scanner, Darryl Revok. In the iconic early scene where Darryl makes a man’s head explode with his mind, Ironside pulls his lips back from his teeth and purses them as if he’s engaged in an especially unsightly orgasm. For those who only remember Ironside as a perpetually gruff character actor—say, Total Recall’s Richter, or the leader of Starship Troopers’ band of interstellar grunts—it’s startling how supple, at times almost feminine, he is here. There’s a live-wire quality missing from his more stoutly defined roles, a sense of something being let loose and not entirely controlled. 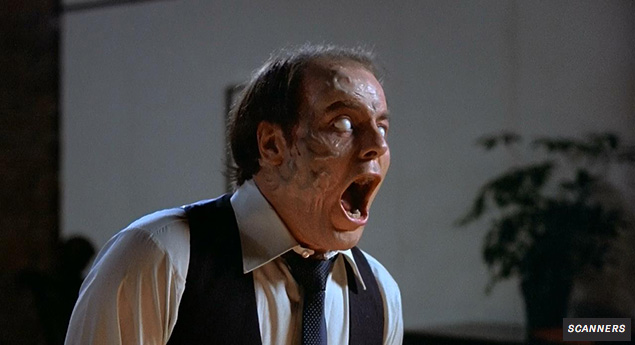 Pitted against each other by Patrick McGoohan’s doddering Dr. Paul Ruth, who stumbles with the kind of overripe dialogue that Reed soars with in The Brood, Cameron Vale (Lack) and Darryl duel at a distance for most of Scanners, with Cameron attempting to infiltrate the “scanner underground” with which Darryl is planning to take over the world. There are scattered moments of greatness, as if Cronenberg were stuffing himself into the cracks of a leaky ocean liner: When Lack assures a member of a rival underground group, “I’m one of you,” the response comes back, “You’re one of me?”

Scanners’ final showdown is a triumph of bloody imagination and practical effects, its coup de grace a defiant twist on the audience’s expectations. But much of the movie is simply a slog, a trial run for ideas that Cronenberg explored later in greater depth and with far more sophistication in Videodrome—and in the late, more fluid fusion of genre entertainment and Cronenberg’s personal concerns in eXistenZ. Scanners grabs attention around the edges, but it’s dead at heart.

(The Brood and Scanners are available for rental or purchase from iTunes and Amazon Instant Video, and via disc rental from Netflix.)