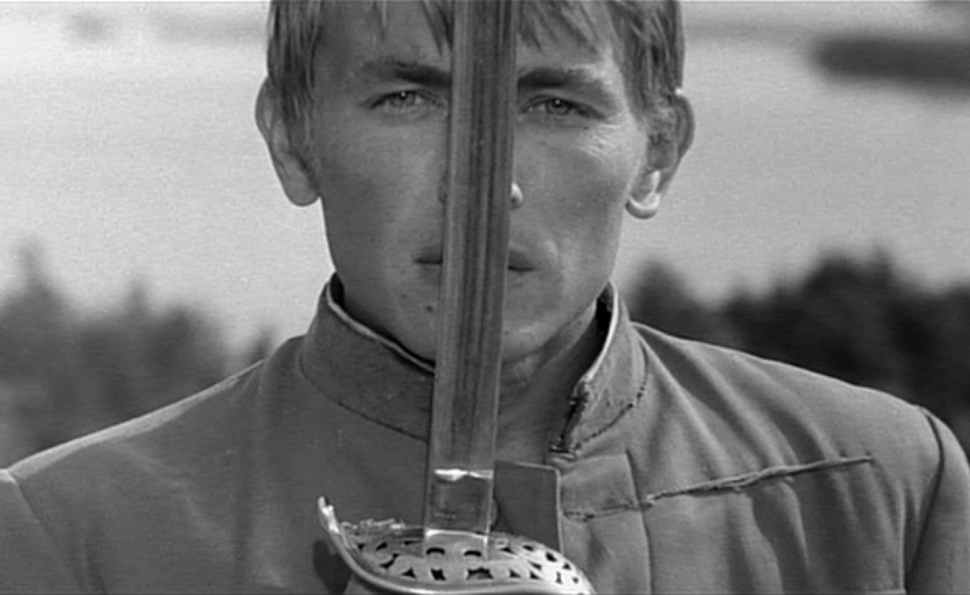 The Red And The White

Robert Altman opened The Player, his satire on movie-industry self-importance, with an eight-minute tracking shot in which two characters discuss famous tracking shots—an ostentatious display of virtuoso technique that calls attention to itself twice over. But Miklós Jancsó’s tracking shots aren’t the mechanized, perfectly choreographed tours de force of Goodfellas or Touch Of Evil. They’re looser, livelier affairs that seem to follow the action rather than bend it to their will. The Pacifist (available on Fandor under the title La Pacifista), the first of four films Jancsó made in Italy after censorship effectively exiled him from his native Hungary, isn’t one of his best-known films, or even one of his best. But a shot early in the film demonstrates how, even away from his home turf, Jancsó put his technique to fascinating use.

The Pacifist’s central character is Barbara, a television reporter played by Antonioni fixture Monica Vitti. As the film begins, she’s covering a public protest, though by whom and against (or in favor of) what is not made clear by the crowd’s all-purpose chant: “Power to the people!” It’s 1970: Revolution, and counter-revolution, are in the air. As the camera, under the control of Antonioni’s frequent director of photography Carlo Di Palma, takes in the protestors scaling the gates of an official-looking building, the sound detaches from the image. Vitti, her Nagra recorder at her side, polls passers-by for their opinions, whose generic inanity only heightens the sense of decentralized spectacle. (Although the image looks fine, the subtitles have the rough feel of a literal translation: “We have our eyes on you since a while,” for instance.)

About five minutes in, Jancsó opens a lengthy shot with Vitti, her microphone held aloft, being swallowed by the surging protestors, whom she eggs on, then flees, making her way into a nearby park. The camera follows her as the soundtrack drifts off again, replaying a snippet of an argument between a diffident Barbara and her alarmed mother. The shot takes in a line of motorcycles zipping through the intervening street, and pauses on a gaggle of young people who will shortly be instrumental to the film’s elusive narrative. The soundtrack shifts to another argument between mother and child, only this time the latter is Sergei (Daniel Olbrychski), a Russian architecture student who has recently entered the country. There’s no indication which of the people in frame might be Sergei, except at the end, when the male voice grows agitated, and a blond figure on screen raises his arms and runs off, followed by the group.

As the youngsters gambol and the motorcycles circle, Vitti makes her way into the shot at the far edge of the frame. She’s still arguing on the soundtrack, provoking her mother by claiming to be pregnant, then withdrawing the claim. She crosses paths with Lupo, a cocksure older man in a gray suit with a red scarf fluttering around his neck. From their brief exchange, which Barbara records, viewers can glean that he’s a former hero of the revolution (Which? Take your pick.) and now a member of the establishment who nonetheless declines to criticize the protestors. “Politicians are like Dracula,” he quips as Vitti waltzes away. “They always need fresh blood.”

As Vitti walks away, she’s briefly surrounded by the group of young people, who leap about like children as the voice of singing school-aged kids fills the air. A sardonic transition then, as Barbara walks up to her car and chides her father for trying to hide his obvious relationship with a much younger woman. Then back to the young people, who have now formed a threatening circle around Sergei as a train whistle screeches across the soundtrack. They karate-chop him in the neck, leaving him lying on the ground, and a concerned Barbara runs into the the frame. But as she nears him, he rises and starts advancing on her, as his friends sprint to Barbara’s car, loot it, and confront her, accusing her of being a Communist—the first hint that their political allegiance lies on the other end of the spectrum. Barbara, who seems to care little about politics, convincingly denies the charge, but perhaps to be safe or perhaps just for kicks, they set her car on fire anyway.

Like this not-quite-opening shot, The Pacifist is a film of fascinating movements whose significance only becomes clear on multiple viewings, and sometimes not even then. The title character, a young right-winger played by the decidedly leftist Pierre Clémenti, splits with his colleagues over the issue of violence. He’s part of the group that figures in that long take, but he isn’t presented as a significant figure, just a hanger-on. Jancsó consistently works to disorient and even confound viewers; even when the voices on the soundtrack do align with what’s happening onscreen, the voices are out of sync, or the characters aren’t speaking at all. It’s a beautifully designed film, but a profoundly pessimistic one, with a dismal outlook on the possibility that any revolution can come to a satisfying, ideologically consistent end. 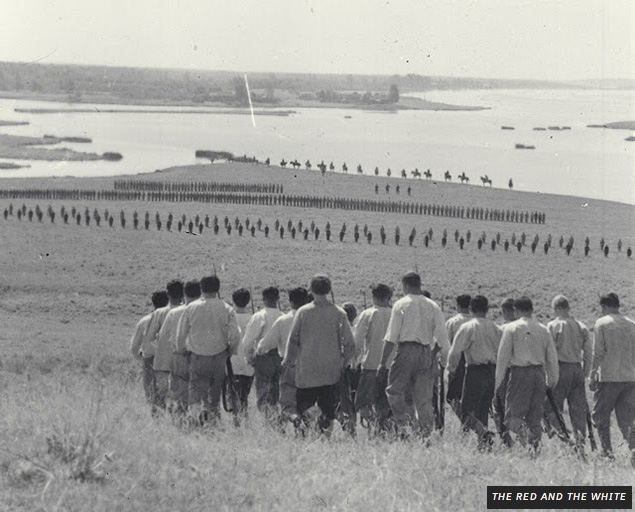 Also on Fandor, The Red And The White, which Jancsó made two years before, is more firmly rooted in reality, but anyone walking in after the opening shot of a map and a title card explaining that it’s set during the Russian Civil War would be hard-pressed to tie it to any particular time and place. Although it’s a war movie, there’s little fighting. Most of its confrontations involve men with guns forcing other men with guns to drop their weapons (and sometimes their trousers), then executing them, more often than not in single shots that trace the shifting balance of power from one side of the conflict, and the screen, to another. This war isn’t a place for glory, or even the attainment of an identifiable objective. It’s simply a place where whichever side briefly has the upper hand tries to wipe out the other, before the tables are turned and the process recommences in reverse. It’s brutal, abstract, and absurd, chilling and darkly funny at the same time. Like Jacques Tati in Play Time, Jancsó keeps holding out potential protagonists, only to whisk them away or kill them off, almost taunting the audience with his refusal to give them someone to root for, or against. It isn’t as aggressively alienating as The Pacifist, which despairs over the effectiveness of nonviolence and violence alike. But it’s a sly attack on the nature of war, and the ideas underlying it.