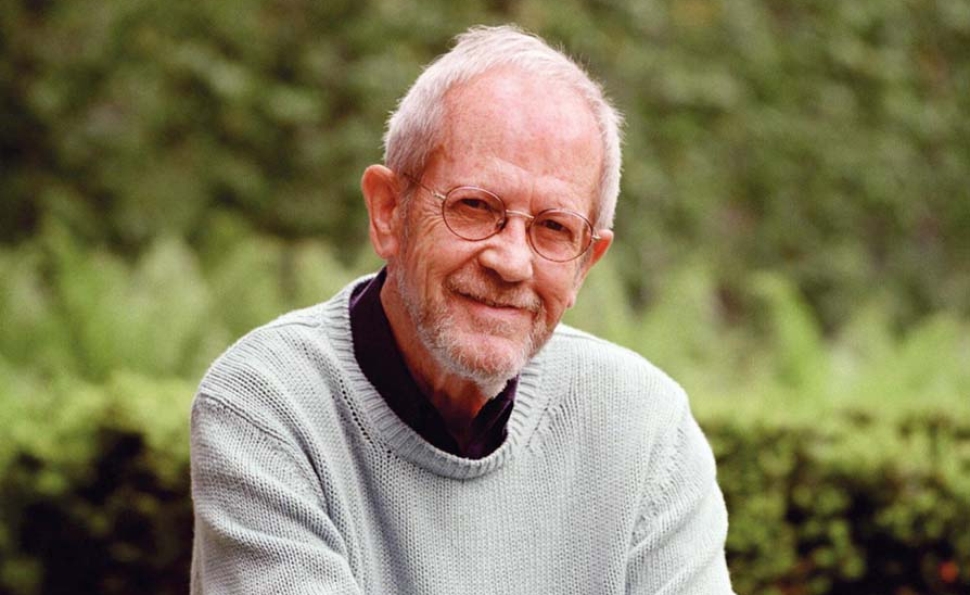 Elmore Leonard's death got a few of us talking about his career, particularly as it connected with the many movies made of his books over the years.

Scott: It would be an insult to say that Elmore Leonard’s books read like hardcover (or paperback) screenplays, but he was one of those crime novelists, like James M. Cain, whose work lent itself more naturally to the screen than other authors of fiction. It’s all about economy of style: Leonard wasn’t the type to get lost in interior monologue or other flourishes of description; he was about action, character, and moving the story forward, which are all things that suit the movies well. And yet it took a while for adaptations of Leonard’s novels to get much respect from critics, at least on a level with the extraordinary one-two-three punch of Get Shorty, Jackie Brown, and Out Of Sight in the mid-to-late 1990s. But let’s not get ahead of ourselves. Plenty of Leonard works were adapted before that Golden Age, some of them quite good, and perhaps we should start there. Noel, do you have any favorite early Leonard movies? And what did you find distinctive about his voice?

Noel: Well, the night before he died, Turner Classic Movies aired my favorite, The Tall T, the first of two 1957 Westerns based on Leonard short stories. (The other one, 3:10 To Yuma, is also a classic.) Leonard later developed his own universe of criminals and lawmen in the novels that became the most famous films based on his work, and maybe it took filmmakers like Steven Soderbergh and Quentin Tarantino to teach Hollywood not to be afraid of the larger, interconnected world that Leonard’s characters inhabited. But the earlier, pared-down Westerns and action movies derived from Leonard—including Hombre, Joe Kidd, and Mr. Majestyk—are just as essential to understanding what distinguished his writing. Because he believed in narrative drive, he relied on the basic convention of “good guys” vs. “bad guys,” but Leonard didn’t draw thick lines between them. His villains were likable; his heroes were flawed. He got into their heads, not to make a larger point about moral ambiguity, but because he knew it served the story better if his readers (and viewers) knew a little more about these people who were shooting at each other.

Tasha: In more recent films based on Leonard’s work, that degree of similarity between heroes and villains often manifests as a sort of shared nervy pettiness. There’s no world-shattering villainy or monumental heroism in a modern-day Leonard story, just a bunch of hustlers trying to get by on various sides of the law. That’s a lot of the fun of the three Leonard-derived classics Scott mentioned, as well as others like Be Cool and even the maligned Freaky Deaky: They’re full of colorful, talky characters operating in a talky-character-rich environment. Early Leonard stories were lean and propulsive, but the later ones tended to be full of sharply characterized oddballs with a lot to say, and he let them bounce off each other like pool balls just to see what would happen. “Elmore Leonard-esque characters” has become film-review shorthand for “low-rent, loudmouthed, quirky schemers who probably aren’t going to accomplish much, but will make an entertaining go of it.” Few writers are that specific and that distinctive across such a large body of work. 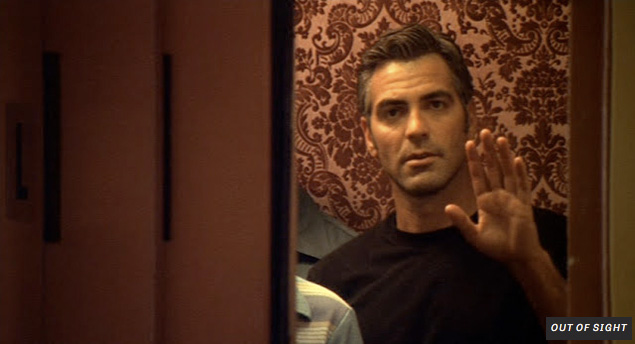 Matt: Right; at a certain point, “an Elmore Leonard movie” almost became a subgenre unto itself. That sense of a uniform Leonard style was definitely enhanced by the clever interplay between Soderbergh’s Out Of Sight and Tarantino’s Jackie Brown, which both feature Michael Keaton’s ATF agent Ray Nicolette. Long before Marvel and The Avengers made it fashionable to make movies in a shared fictional universe, Leonard’s movies fit together perfectly.

It’s worth mentioning, too, that Leonard inspired great screen adaptations for more than 50 years, from his 1950s Westerns to the currently (and rightfully) acclaimed Justified on FX. Writers who can remain culturally relevant for that long are few and far between. Somehow, Leonard never seemed out of style.

Scott: You make a good point about Leonard never seeming out of style, Matt, and I think that’s owed to two things:

So what are some of our favorites? The aforementioned Jackie Brown and Out Of Sight are perhaps my favorite films by Tarantino and Soderbergh, respectively, so they’re naturally high on the list. They also illustrate a key point in adapting Leonard successfully: Filmmakers err by overemphasizing the “colorful” nature of his characters, as in the otherwise decent Get Shorty and its not-so-decent sequel Be Cool. Tarantino and Soderbergh play them cooler and more down-to-earth, and it keeps them from seeming like cartoons. It’s perhaps no coincidence, then, that the unlikely screen romances in both—Pam Grier and Robert Forster in Jackie Brown, Clooney and Lopez in Out Of Sight—are so unforgettably resonant. They share a beautiful chemistry that would dissipate if either director made too big a show of their “odd couple” status.

Noel: I re-watched Out Of Sight about a month ago, and found it even stronger now than it was when I first saw it, in large part because of that easy camaraderie you mention, Scott. What Leonard adaptation is my favorite? Tough to pick between Out Of Sight and Jackie Brown, which are both just about perfect (as are The Tall T and 3:10 To Yuma). But I’m going to cheat here and choose the FX television series Justified, if only because Raylan Givens has become my favorite Leonard character: a selfish, impulsive asshole who is nonetheless every bit a hero, and usually right. 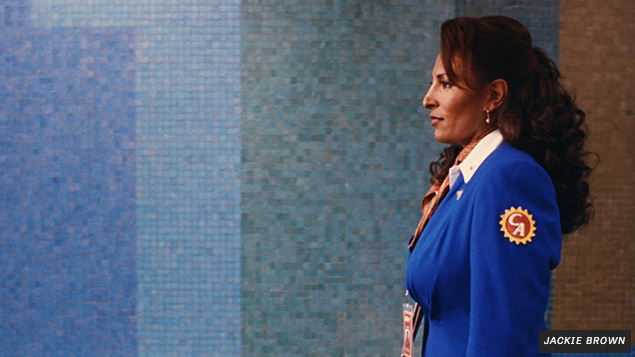 Tasha: Hold your horses, there, Scott. I love the casual cool of Out Of Sight and Jackie Brown—particularly the way the former handles the romance between Clooney and Lopez, who seem to decide on first glance that of course they’re going to have sex, but that they still want to play out the chase, because knowing the inevitable outcome doesn’t make the process any less fun. That said, I think you’re seriously undervaluing that “cartoonish” comedy in Get Shorty. It’s a longtime favorite of mine because of that blend of Leonard’s crime world and the sheer ridiculous, over-the-top depiction of characters like Danny DeVito’s self-important film star and Dennis Farina’s low-rent mobster. The fundamental idea that a leg breaker and loan shark would be perfectly comfortable in Hollywood because the movie business and organized crime are basically the same—that’s pretty hilarious all on its own. So is the idea of a career criminal who seems to know more about movies than most of the people in Hollywood. And John Travolta’s casual performance in the lead, with his rarely restrained smirk and barely restrained violence, is a blast. Get Shorty isn’t the tautest Leonard narrative, but it may well be the funniest, and there’s nothing wrong with that. And Leonard himself has said it was the first film adaptation of his work that really got what he was going for, so let’s not dismiss it with a pallid “decent.”

Matt: I’ve got Tasha’s back here; Out Of Sight and Jackie Brown are flashier (and, yes, better) films, but don’t sleep on Get Shorty, which is a very satisfying and highly re-watchable comedy; in fact, I’ve definitely seen it more than either of those other Leonard adaptations. It’s one of those Hollywood productions where all the pieces came together: good leads with strong chemistry (Travolta, cementing his career comeback, and Rene Russo, in her breakout role), a stacked supporting cast (including the late Dennis Farina and James Gandolfini), smart direction by Barry Sonnenfeld, and a sharp script (by Scott Frank, who went on to also write Out Of Sight, another potential reason these films feel so cohesive). It may not be a great movie, but it has a lot of great scenes: Travolta coolly tossing Gandolfini’s stuntman-turned-mob-muscle down a flight of stairs and then excitedly whispering to Russo that he just met a real stuntman; DeVito’s ultra-pompous movie star ordering egg white omelets for the entire table (“with the shallots just slightly brown”) and then leaving before they even arrive. Along with Robert Altman’s The Player, it’s one of the defining onscreen portraits of 1990s Hollywood. 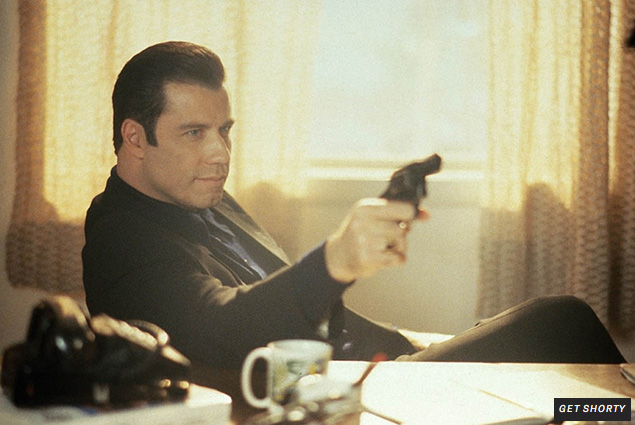 Nathan: I am late to the party, having been out of the office all morning, but I would like to join the chorus of appreciation of Get Shorty. I agree that the film is a whole lot more than “decent,” and Leonard created such rich, vibrant universes in his novels and their adaptations that there is ample delight to be found even his lesser efforts.

Be Cool, for example, is in many ways an embarrassment to Get Shorty, but I will always treasure Dwayne “The Rock” Johnson’s brilliant performance as a gay bodyguard looking to break into acting. His “monologue” that’s actually a two-person dialogue from Bring It On damn near redeems the whole regrettable endeavor. And as Tasha stated earlier, even the barely released Freaky Deaky contains some wonderful performances and killer scenes. I’m even fond of the little-seen, George Armitage-directed 2004 adaptation of The Big Bounce, which isn’t much of a crime film, but excels as what Quentin Tarantino—who paid Leonard the ultimate tribute by making Jackie Brown the only adaptation in his career—called a “hang-out movie,” films populated by characters so colorful and fun you want to revisit them over and over again. Out Of Sight, Jackie Brown, and Get Shorty are similarly all great “hang-out movies.” Out Of Sight is so strong that its deleted scenes are better than the best scenes in a lot of good movies.

Leonard was a populist and an entertainer who cast a long shadow and thrived in multiple mediums. He was a giant of pulp literature, movies, and television. At his best he elevated pulp fiction to an art form. The masterpieces will endure while the many weird little orphans littering his career patiently wait to be rediscovered. Leonard knew better than anyone that disreputable characters and colorful lowlifes often made for the best company, at least where entertainment is concerned.