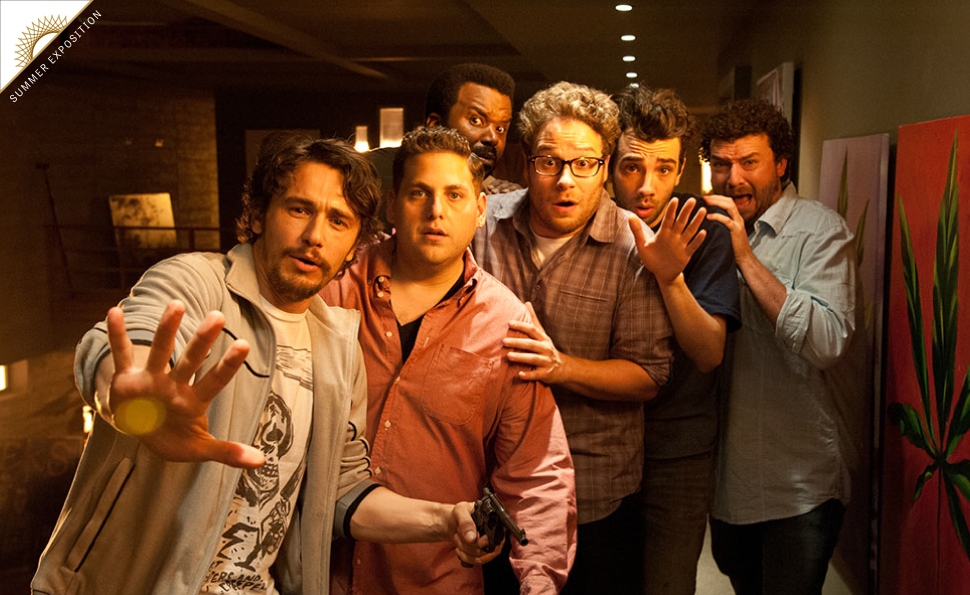 This Is The End and the promise of personal blockbusters

The beginning of summer blockbuster season brings breathless anticipation: Another Iron Man! A totally dark Superman reboot! Giant robots versus giant monsters! An internship at Google! The end of the summer blockbuster season, for me anyway, generally brings this response: What the hell was that all about? As a moviegoer, I’m left feeling like one of those bros in the The Hangover (and The Hangover Part II and The Hangover Part III), stumbling around with a dull throb in my head, trying to piece together what happened the night before. Maybe I had a good time here and there, maybe I was chased by a bengal tiger, but whatever the case, I find myself “remembering” the summer by following the breadcrumbs of ComingSoon.net’s release-date pages and consulting reviews from two or three months ago as if I were blowing the dust off ancient texts. 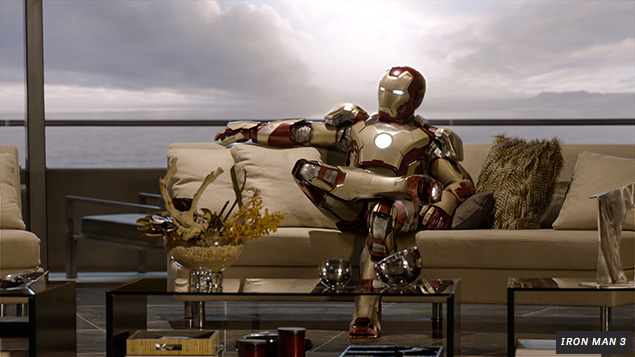 When thinking about what was memorable about the summer, the common thread for me are the films—or more often, the fleeting moments in films—that reveal something about the human being behind the machine. Because I still believe that film is fundamentally a means of personal expression. That isn’t changed (but is altered) by collaboration, that isn’t changed (but is altered) by studio dictates, that isn’t changed (but is severely altered) by tentpole productions on a nine-figure scale. Four months later, I couldn’t describe the basic plot of Iron Man 3 or describe any way in which Shane Black’s visual style deviates from the Marvel template established in the first two entries. But Black’s genius for verbal gamesmanship—clear enough when he was the white-hot writer of Lethal Weapon and The Last Boy Scout, but best in his brilliant movie-movie Kiss Kiss Bang Bang—made the least-expensive scenes in the movie stick to the ribs. A line like, “You’ve got a minute to live. Fill it with words,” typifies the Black touch: a tongue-in-cheek throwback to the hardboiled patter of noir, aware of its own semantics. 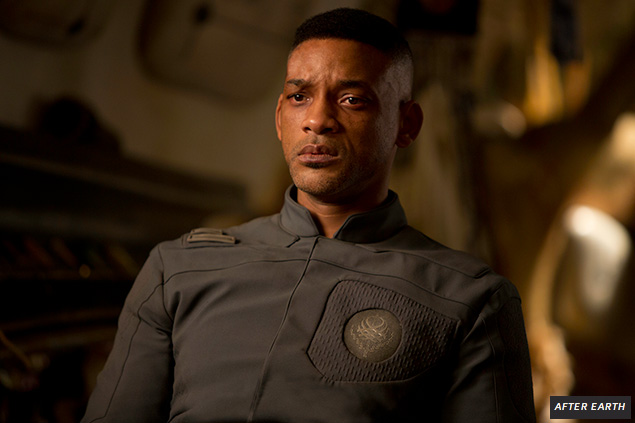 More often, though, the battle for the soul of this summer’s movies was ceded to the studio. There’s a strain of Hollyweird religiosity to After Earth—informed, some have plausibly speculated, by star Will Smith’s dabblings in Scientology—but it continued M. Night Shyamalan’s recent slide from an idiosyncratic director of twisty mood pieces (however worthy of ridicule post-The Village) to an anonymous craftsman-for-hire. One of the better movies of the summer, Pacific Rim, found Guillermo Del Toro delighting in putting a modern polish on old-fashioned monster movies and delving into the fantasy subcultures so prevalent in his other work. But even he got snared by the need for conventional heroes and redemption arcs, and there was never a sense that Pacific Rim was fully his in the way Pan’s Labyrinth or The Devil’s Backbone are. In the effort to please everyone—and with stakes as high as they are—the particular pleasures of the movies get lost.

For me, the most personal studio film of the summer was, not at all coincidentally, the best: This Is The End, Seth Rogen and Evan Goldberg’s foul and surprisingly audacious apocalyptic comedy about friendship, Hollywood culture, and giant demon cock-monsters. And one of the many reasons is that Rogen and Goldberg, longtime writing partners (Superbad and Pineapple Express are their hits, The Green Hornet and The Watch their misses), are not trying to fit a square peg into a round hole. They’re not like James Mangold or Marc Forster, drama specialists—Mangold established himself with Cop Land, Forster with Monster’s Ball—trying to lend gravitas to the pulp of The Wolverine and World War Z, respectively. Their sensibility is wholly in the mainstream, vulgar and weed-obsessed perhaps, but basically aimed toward making movies that entertain others as much as Ghostbusters entertained them. This Is The End may detour into monologues about ejaculation and inferences of demon rape, but it’s much more comfortable with itself as a studio creation than, say, Kenneth Branagh working Shakespearian themes through the Marvel factory in Thor.

Rogen and Goldberg casting a who’s-who of young Hollywood comedy stars as themselves obviously gives This Is The End a personal touch, though it’s not worth trying to figure out how closely “Jay Baruchel” relates to the real Jay Baruchel (quite close, it would seem) or “Michael Cera” to the real Michael Cera (hopefully very far). But there’s an unmistakably personal resonance to the relationship between “Seth Rogen” and “Jay,” two young Canadians whose friendship has been altered by different career trajectories. Seth has gone Hollywood, with his McMansion, his gluten aversion, and his asshole movie-star buddies (“James Franco,” “Jonah Hill,” “Craig Robinson,” many others); Jay is allergic to the scene, and would rather just hang out with his friend. 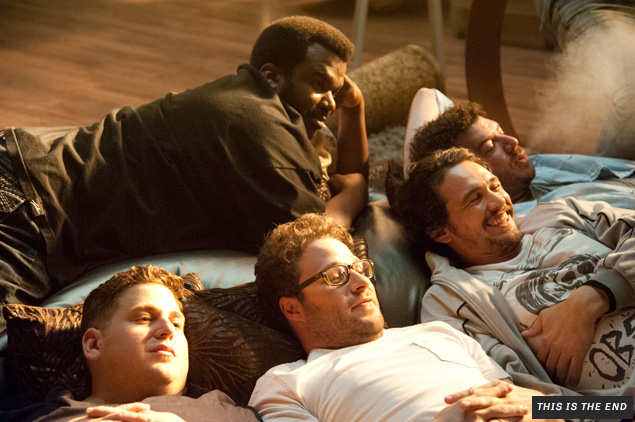 The film is slippery enough with identity to keep it from being about specific real-life relationships between specific people on screen. It’s much more inclined to send up personas, like Franco as a spacey multi-hyphenate artiste or Danny McBride as every bit the boorish lout from Eastbound & Down. Yet it’s bracingly honest about the fact that fame can change lives and ruin friendships, and careers that take off in different directions (or don’t take off much at all) can lead to jealousy and estrangement. There’s something cold about the fact that when the earth opens up and sucks a few comic actors into its fiery maw, they happen to be recognizable faces (like Martin Starr or David Krumholtz) who get a line or two, but aren’t among the central gang. Fame is a cruel mistress.

Among the glut of apocalypse movies, it’s important to note that Rogen and Goldberg didn’t choose any ’ol manmade, zombie, or Mayan-prophesied Ragnarok, but The Rapture specifically, where the righteous get lifted to the heavens and the damned suffer for their sins. Behind the fun of This Is The End lies a sincere anxiety from its creators about whether a life of wealth and hollow excess has turned them into bad people. It might be fair to criticize the film for self-indulgence. Goodness knows, it’s nothing if not a IMAX-scale selfie for a generation of comic talents, all riffing under their own names. But indulgence is a sin for which the film is willing to confess and offer repentance. Spirituality is not remotely an element in This Is The End, but its characters do have to show some measure of decency and humility, and that’s enough.

This Is The End stands to endure as a snapshot of young Hollywood comedy—crude and bro-centric, but a reflection nonetheless—but it’s also a model of how big summer entertainments can benefit from a personal touch. Though it’s scaled down from the lumbering behemoths released around it, it feels like the only blockbuster of the season that’s both wholly comfortable with itself and unwilling to make concessions to the status quo. It hints at a way forward for a studio system that’s become too flavorless and calculated, proving that the personal can coexist with spectacle and lead to a much better, more distinctive form of entertainment in the process. Maybe then, like the wistful heroine of a Nicholas Sparks novel, we’ll get a summer to remember.