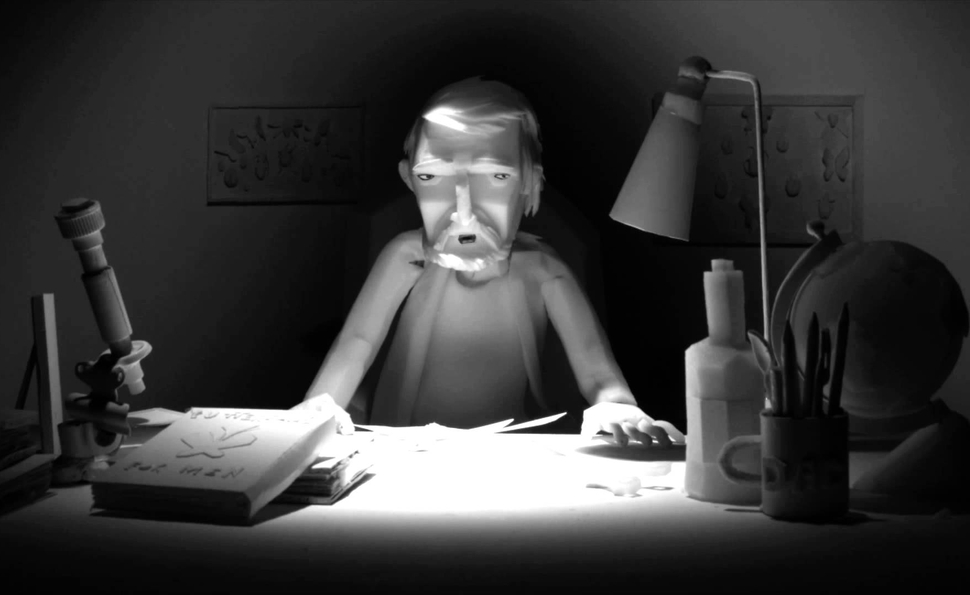 As remarkable as modern computer rendering can be, there’s still something magical about hand-crafted stop-motion animation. The slow, contemplative nature of the process is akin to model-making, or zen gardening, or other pastimes that require patience and meticulousness. Mikey Please’s award-winning short “The Eagleman Stag” (made as his thesis for London’s Royal College Of Art) explores deep thoughts of the kind that might occur to a person who’s willing to spend an entire day shooting just a few seconds of film. Rocketing back and forth through the life of a taxonomist named Peter (voiced by David Cann), “The Eagleman Stag” considers how people perceive the passage of time, observing how to a 4-year-old, the next birthday is a quarter of a lifetime away, while to a 40-year-old, “every second is smaller, compared to the last.” It’s a meditation on how cruel the clock and the calendar can be, elucidated by a cranky old man reflecting on what he’s accomplished.

In a separate, behind-the-scenes video, Please explains how the idea for the short sprung from some late-night musings. He also shows how the characters were carved out of white, spongy foam, then moved around sets that were constructed at different scales, to facilitate smoother camera push-ins. That effect of three-dimensional motion pays off most dramatically in a scene where a visitor moves quickly through a massive scientific institute that bears Peter’s name, looking like a blurry figure in the foreground as he rushes along. Knowing how Please made “The Eagleman Stag” doesn’t diminish its mystery, because while it’s impressive as a technical achievement, it’s even more impressive for the way Please manipulates viewers’ experience, stretching out some moments and compressing others. Please illustrates that what really matters is the meaning of any given minute of a person’s life—not how long it seems to last.

After animator Ray Harryhausen completed his World War II service—which had him working with a special division of filmmakers and entertainers—he scrounged up some film stock and started making his own stop-motion short films, plucking his material from Mother Goose. The

shorts did well enough on the classroom circuit for Harryhausen to make another batch, based on classic fairy tales. Working with writer Charlotte Knight and narrator Del Moore, Harryhausen crafted gentle versions of familiar scenarios, while showcasing his ability to give inanimate objects personality. With no boss to answer to but himself, Harryhausen was free to take his time on these shorts, using them as a kind of moving sketchbook for animation ideas he later refined as the effects supervisor on feature films like The Beast From 20,000 Fathoms and The 7th Voyage Of Sinbad.

All in all, Harryhausen made five of the fairy-tale shorts, though the fifth—“The Tortoise And The Hare”—went uncompleted for nearly 50 years, until it finally debuted in 2002. The most haunting of the cycle is “The Story Of King Midas,” completed in 1953, right before Harryhausen transitioned to features. The tale of a rapacious ruler who acquires—then regrets—the ability to turn everything he touches into gold had been memorably animated before in 1935, as one of the best of Disney’s “Silly Symphonies.” Harryhausen brings his own technical innovation to his version, introducing cinematic camera moves and dissolves that he had to figure out how to do on his own. The characters in Harryhausen’s “King Midas” resemble antique china dolls (with the exception of the supernatural stranger who curses Midas with the golden touch, who was modeled after Conrad Veidt, and looks a little like a vampire), and the entire short has the quality of a child quietly reenacting an oft-heard story in the playroom. But there’s creeping nightmarishness to this “King Midas” too, as the hero comes to understand that some decisions made casually may be frozen for eternity.