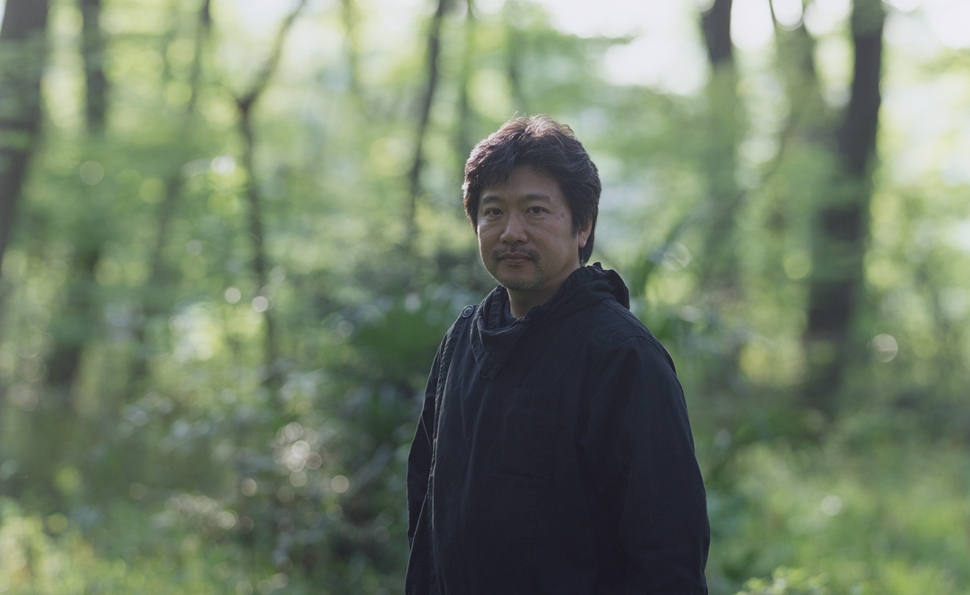 Toward the end of my phone interview with filmmaker Hirokazu Kore-eda late last year, I asked him—through a translator—why he thought his films had been so well-received in the West. Other high-profile Japanese directors might get one or two of their films distributed in the U.S., but Kore-eda has been a staple of the festival circuit and American arthouses since the mid-1990s, when his first fiction feature, Maborosi, won awards and made critics’ Top 10 lists with its simple, heartbreaking study of one young mother’s grief. In the ensuing two decades, Kore-eda’s films have continued to captivate critics and audiences Stateside: After Life, his docu-realist imagining of a way-station for the recently deceased; Nobody Knows, an alternately warm and despairing depiction of a family of abandoned children; I Wish, a sweet, surprisingly profound story about separated brothers attempting supernatural trickery to save their parents’ marriage; and more. When I asked Kore-eda for an explanation, he threw the question back at me: “Why do you think my films are successful?”

After taking a beat, I told Kore-eda about my deep affection for his 2008 drama Still Walking. In some ways, it’s specific to Japan—it’s about the subtle, cross-generational dynamics of a family gathering for its annual memorial ceremony for a long-dead son. But to me, it feels familiar, because of the way it captures the passive-aggressive patterns relatives naturally fall back into whenever they reunite. It’s like the difference between stand-up comedians who make generic jokes about McDonald’s hamburgers, and those who tell long, involved anecdotes about frustrating experiences at fast-food restaurants that only exist in their hometowns. It doesn’t matter whether the audience has tried the same food; the real connection is to the comedian’s reaction. That’s what translates from person to person, and experience to experience. And that, I said to Kore-eda, is why I love Still Walking, and so many of his films. They’re so specific that they end up being universal.

Kore-eda replied that Still Walking was actually a turning point for him, in terms of understanding what will and won’t work for an international audience. “When I first started making films,” he said, “I admit that I did think about how to make my films more thematically resonant internationally. But with Still Walking, I decided to make it very personal, and keep it very domestic. Even the sales agency we showed it to at first felt that it was too domestic, and wouldn’t be a good fit for an international audience. But then the film went out and it ended up resonating with a lot of people who felt that the mother in the film was just like their own. Ever since, I’ve felt, ‘The more personal you make it, the more resonant it’ll be.’” 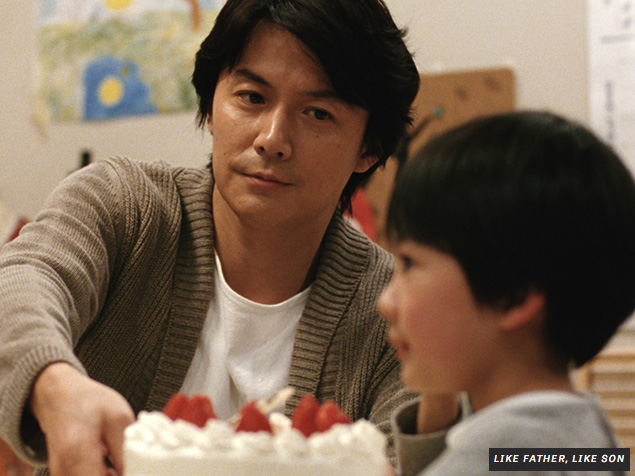 Kore-eda’s latest film, Like Father, Like Son, is another case in point. Kore-eda has said the film was inspired by his experience of becoming a father for the first time, and wondering why he didn’t feel the deep, immediate bond with his daughter that his wife had from birth. The protagonist of Like Father, Like Son, Ryota Nonomiya (played by Masaharu Fukuyama) is a well-off middle-aged professional—a lot like Kore-eda—who believes he’s a good dad, even though he rarely spends time with his 6-year-old son. When Ryota finds out that his child was switched at birth with another, he looks into his legal options, including the possibility of getting his biological son back and keeping the one he and his wife have been raising. But as the process gets underway, Ryota realizes he’s going to have a hard time making the case that someone as emotionally distant as he is has any business taking custody of another man’s child.

Like Father, Like Son sets the audience up to side with Ryota, painting the other father, Yukari Saiki (Maki Yoko) as a freeloading doofus who lacks ambition and lives in semi-squalor. But before long, it becomes fairly obvious that Yukari is a much more attentive, loving father than Ryota, regardless of Yukari’s meager finances. Kore-eda told me that the bait-and-switch was part of his plan from the beginning. “That was definitely an intentional structure. I wanted to show how the father’s confidence begins to break down throughout the course of the film, so that in the second half, you have this man who in the first half of the film suggested he could take on both children, end up having to be told that the other family could very well take on both kids. That sort of humiliation, he has to experience. The first half of the film deals more with the idea of the switched babies and the families dealing with that and coming to the decision to go ahead and swap their children back. But in the second half of the film, the second hour, I think that you’ll find the story really begins to narrow down and home in on the story of the father having to confront this child before him, and to really learn how to become a father.”

Kore-eda acknowledges that Like Father, Like Son might’ve been an entirely different kind of film had it been about the mother. “From the very beginning, I knew I wanted the idea of fatherhood to be at the center of the film,” he said. “I wanted to avoid having the mother’s perspective be too front and center because I felt that might run the risk of making the film too sentimental.” But he also made that choice because the film is partly about himself. “In terms of the lifestyle I lead today, I would definitely be closer or more aligned with what the protagonist experiences, not because I have this kind of strong, heavy-handed way of raising a child like he does, but more so the fact that I really have little time to spend with my daughter, because of work. Today, I tend to be very aware of how precious it is to be able to treasure those moments you have with your child.”

To illustrate this, Kore-eda called on his skill for breaking down a big premise into smaller, relatable parts. Like Father, Like Son is very concerned with the presence of children, which is often best understood when those children are gone, with hundreds of tiny toys and crafts trailing in their wake. “I tried to structure the film so it’s constantly moving forward, instead of looking back to the past,” Kore-eda explained. “I structured the film so the audience would have to keep catching up. But toward the second half, I wanted to show what was left behind, the traces that remind the protagonist of what was there. That’s what leads to the renovation of the inner self in that character. I’m hoping the audience is taken on that same journey.”

After decades of movies and news stories that paint Japanese culture as success-driven to the exclusion of all other values—family life included—Like Father, Like Son shows a changing Japan, where even Ryota’s boss urges him to take time off work to get his home life sorted. According to Kore-eda, “It was by design that I made the protagonist a very traditional and conservative man among this changing society, where people are spending more time with their families. I think in the 1980s, you saw Japan emphasizing work more, but today, I think people are coming to realize that spending all your time at the office and being a workaholic isn’t the best way to go about it.” 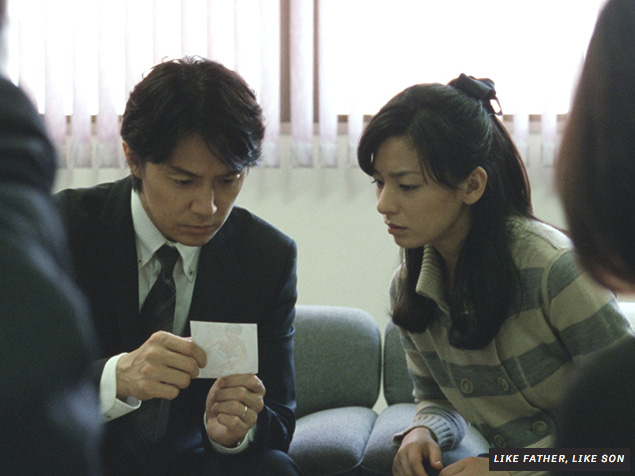 Kore-eda’s own experiences with the business community in Japan has largely been limited to dealing with producers and studios, which he admitted has never been an easy process for someone like himself, who generates his own ideas, then executes them in his own way. “I think the studios tend to prefer adapting successful manga or TV properties, and only a handful of filmmakers are able to really continue to consistently make films from original ideas,” he said. “This film, we were able to get made with the support of a TV network, and fortunately, it’s been quite a box-office success. It’s my most successful film to date. I think it’s probably bought me five years of getting to make the films I want.” That’s useful for someone who works the way Kore-eda does, letting multiple ideas “marinate” until “some of them fall by the wayside and other ones gain traction.” He likes to wait to make a film until he’s sure there’s “a certain vitality and life within that idea.”

Before we got off the phone, I asked Kore-eda why his films so often start with an idea that would ordinarily lend itself to fantasy or melodrama—life after death, abandoned kids, children switched at birth, and even an inflatable sex toy coming to life in 2009’s Air Doll—then treat those elements as though he’s continuing to shoot the slice-of-life documentaries he made early in his career. Kore-eda laid out a mini-manifesto defining his philosophy of art:

“Now that you mention, I guess it is true that I do have that type of style, placing some kind of dramatic event at the beginning, then doing something a little bit more natural. It’s not something I’m conscious of. In my filmmaking, one of the things I am trying to do consciously is to show the things in our daily lives that seem banal and ordinary, but that are actually very, very special. Maybe it requires some kind of major event—whether it’s death or an adult doll becoming aware of the world—to see those things we often overlook.”