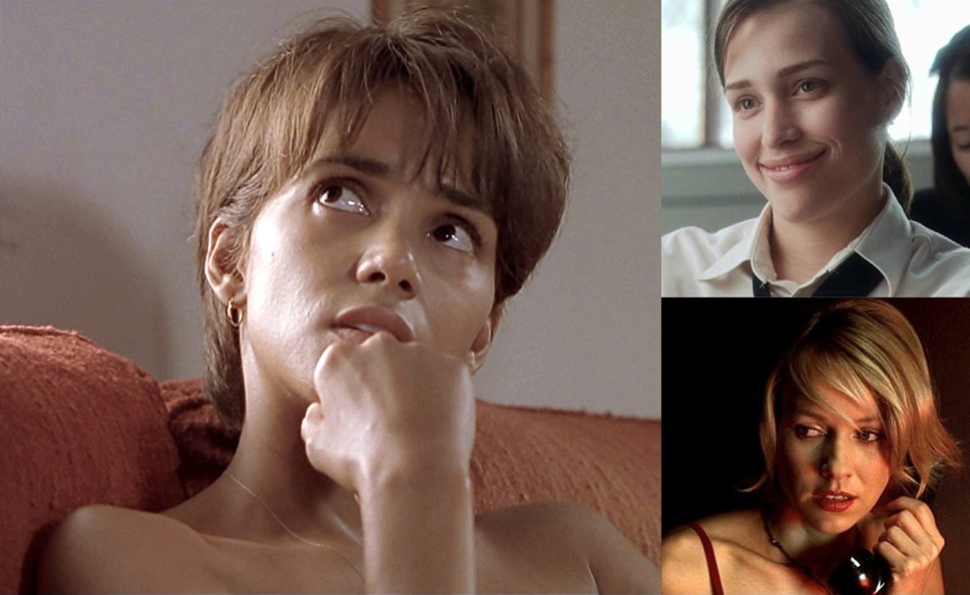 Reassessing the best actress of 2001 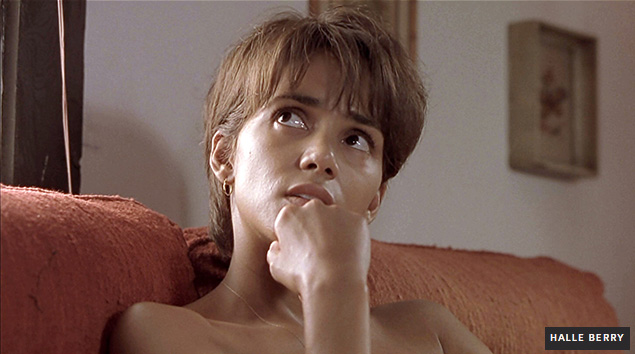 Even a dozen years later, criticizing this performance feels vaguely suicidal. Halle Berry was the first African-American winner in the history of the category, and remains the only one to this day; there was a sense at the time that giving the prize to anyone else could only be construed as racism. (Even though, as we’ll soon see, Berry won none of the major critics’ awards that year. Only the always-suspect National Board Of Review picked her.)

Nonetheless, here goes: Halle Berry is not, in general, a very good actor, and she is flat-out terrible in Monster’s Ball, to the point where she nearly kills an otherwise solid melodrama. Every choice she makes is the most histrionic one available. During the buildup to the movie’s famous sex scene, for example, her character, Leticia, tells Billy Bob Thornton’s Hank a personal anecdote about her son, and Berry, who knows what’s coming in the script, plays each moment as a signifier of Leticia’s impending breakdown, which makes her look like an escaped mental patient rather than a grieving human being. (David Mamet, whose notions about acting are admittedly rather extreme in the opposite direction, once summarized this approach as “I’m so glad to see you today, because, as you’ll find out later, I’m a mass murderer.”) Even when Leticia first discovers that someone close to her has died (i.e., when an emotional outburst is clearly justifiable), Berry takes it so far over the top that she registers solely as a showboating performer—it’s a cartoon notion of how a distraught person behaves. The only good thing about the performance is that it gives Thornton a good excuse to underplay, by way of compensation; his restraint cancels out some of her fervor, creating the illusion of a symbiotic relationship. 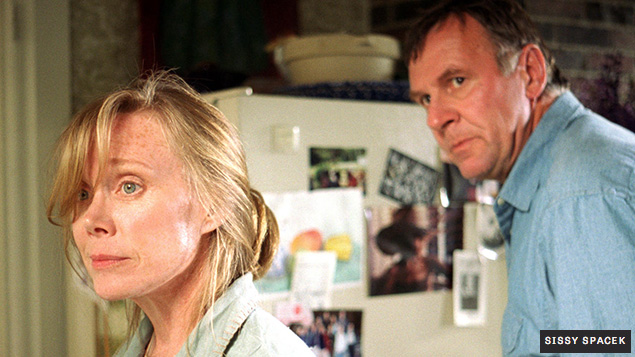 This was my first year as a member of the NYFCC, and I vaguely recall arguing that Spacek’s performance properly belonged in the supporting category. Looking back, though, I think I was wrong—both Spacek’s Ruth Fowler and Tom Wilkinson’s Matt Fowler are given roughly equal weight, even if Matt ultimately proves more, uh, active in processing their son’s death. In any case, it’s hard to begrudge Spacek anything, as she’s virtually always a joy to watch. If I’m less enamored of this particular performance than most of my colleagues were, it’s mostly because the movie as a whole strikes me as overly fussy, and that fussiness inhibits certain actors even as it liberates others. One of Spacek’s big scenes sees her receiving a heartfelt, achingly sincere apology from her late son’s older ex-girlfriend (Marisa Tomei)—who did nothing wrong, apart from being previously married to a violent cretin (William Mapother)—and listening in complete silence, then suddenly smacking Tomei’s character hard in the face. Spacek plays this moment as well as it can be played, in that she doesn’t telegraph the slap in any way, but it still feels phony, like the sober art film’s method of goosing the audience.

Another emotional confrontation requires Spacek to smash a plate on the ground and stomp around her house, slamming doors behind her; I’m sure some folks do things that in real life, but in the context of this movie, with its hushed silences and ponderous fades to black, such behavior comes across as calculated. Spacek was a relentlessly imaginative and idiosyncratic actor in her 1970s heyday; it’s impossible to imagine anyone else playing her role in Badlands, or 3 Women, or, as we’ve just learned, Carrie. Here, she’s sticking to the script, doing solid, professional work in a role that most of her contemporaries could handle equally well… and I strongly suspect that whoever played it would have been showered with accolades. Glad it was her, though.

Here she is again. Funny, because before looking up the results, I would have sworn that a different actress (see next entry) swept the critics’ awards in 2001—I guess what I’m remembering are the critics’ polls, which I’m pretty sure she won in a landslide. Anyway, I’ll use this space to put in a quick word of praise for Maggie Cheung, who turned in a supremely elegant, magnificently controlled performance in Wong Kar-wai’s masterpiece In The Mood For Love (technically a 2000 film, but released in the U.S. the following year). Cheung’s cheongsams (a one-piece Chinese dress) are so stunning that it can be difficult at times to pay close attention to her face. But she’s confident enough to risk being upstaged by her outfits, wearing deep emotions lightly. The delicacy with which her Mrs. Chan embarks upon an affair with Tony Leung’s Mr. Chow, after they discover that their respective spouses are sleeping together, provides much of the film’s intensely moving romanticism. Also, I’m only half-joking when I say she moves exquisitely in slow motion: Physicality is a crucial, perpetually underrated aspect of acting, and if ever there were a role that required expertise in a sinuous walk, this is it. 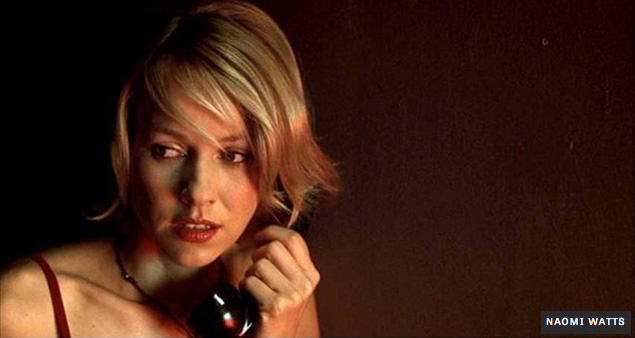 This is the girl. (I’m so tempted to just leave it at that.) Genuine star-making turns don’t come along all that often, especially for actors who’ve spent years slugging it out in small parts, with no recognition. Naomi Watts, who watched as her old friend Nicole Kidman became a phenomenon, signed on for a TV pilot with David Lynch, which history suggested would make her, at best, the next Sherilyn Fenn or Lara Flynn Boyle. Instead, her big break was scuttled when the pilot was rejected… only to be resurrected two years later as a feature film, in a way that unexpectedly gave Watts the ideal opportunity to demonstrate her range. Still, while her abrupt transformation from perky, idealistic Betty to jaded, heartbroken Diane is hugely impressive, the scene (or rather, two scenes) that changed Watts’ life came straight from the pilot. In the first, Betty rehearses some of the lousiest dialogue ever penned, playing the lines just as they were (atrociously) written. Sissy Spacek herself couldn’t do better using that approach—it’s a lost cause. But in the second scene, at the actual audition, Betty instinctively decides, after the first few cruddy lines, to play against the text, speaking ostensibly angry words in a tremulous, passionate whisper and thereby turning the material upside down. In the context of the movie, this is eventually revealed as a wish-fulfillment fantasy—washed-up Diane’s dream of flabbergasting a room with the unexpected force of her singular talent. In the real world, however, that’s exactly what Watts accomplished, and she’s never looked back. When I conducted a survey of about 40 critics and hardcore cinephiles in late 2009, inviting them to vote for the best performances of the previous decade, Watts as Betty/Diane was the runaway winner for actress, beating the nearest competitor (Imelda Staunton in Vera Drake) by more than 100 points. It’s that significant and unforgettable a tour de force, and people will still be talking about it decades from now. 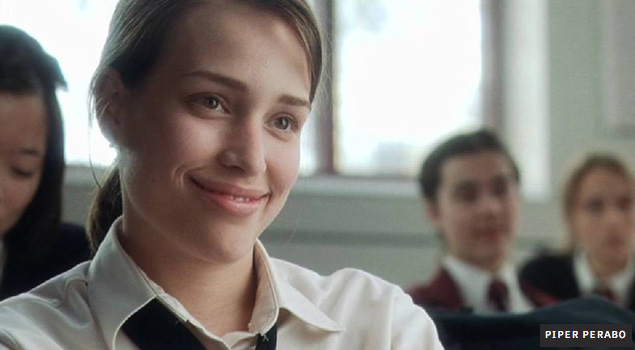 When your first starring role involves gyrating for bar customers in a movie called Coyote Ugly, getting respect tends to be an uphill battle. And Lost And Delirious, a coming-of-age saga (loosely adapted from Susan Swan’s novel The Wives Of Bath) that positively wallows in cliché, has justly been forgotten. Nonetheless, Piper Perabo starts with one of those clichés—the rebellious, life-affirming nonconformist whose antics change the protagonist forever—and makes it sing via sheer gutsy force of will. As Paulie, whose romantic relationship with school roommate Tori (Jessica Paré) falls apart tragically when they’re discovered in bed together, Perabo turns in one of the most impassioned performances I’ve ever seen, fiery with conviction; she so fully inhabits the character’s headstrong, romantic idealism (this is a girl who quotes Shakespeare to her lover, without a trace of irony) that it’s almost possible to see her vibrating. In theory, Paulie is a supporting role—the lead part, a mousy girl who’s actually nicknamed Mouse, is played by Mischa Barton—but Perabo effectively turns her into the heroine, if only by making everybody else onscreen seem insignificant by comparison. When the conception of a character is this shopworn, there’s a temptation to coast, as a lot of the work has been done for you; a recent male-centric equivalent, The Perks Of Being A Wallflower, didn’t cause the very talented Ezra Miller to so much as break a sweat. Perabo, by contrast, plays the role as if nobody has ever seen its like before, all but daring us to find her ridiculous. I’ve seen her in virtually nothing since—she plays small but crucial roles in The Prestige and Looper, but little is required of her as an actor in either—but on the basis of this one performance, I feel certain that she’s being wasted. Nobody could commit herself so wholeheartedly and have nothing else to give.