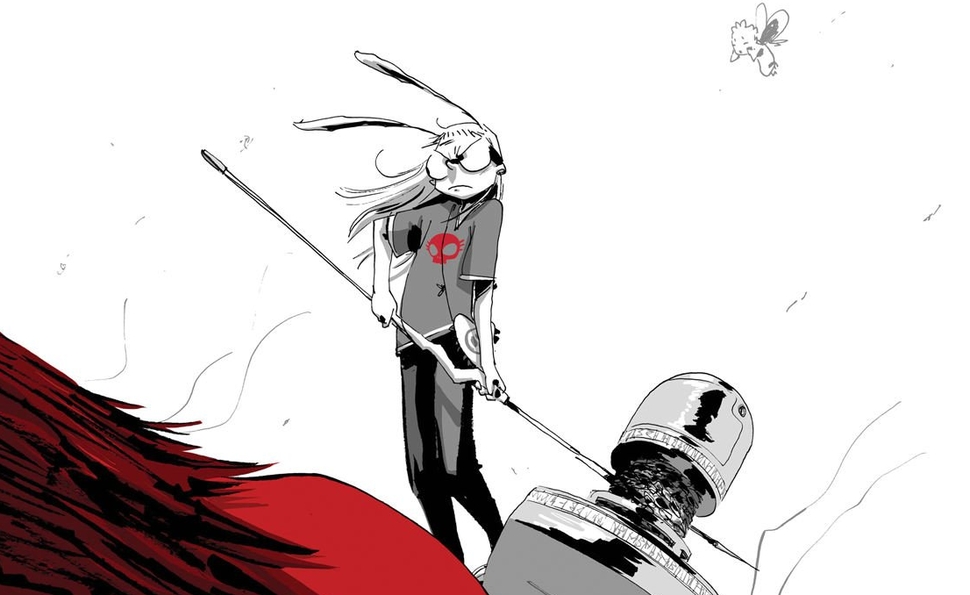 Why the dynamism of I Kill Giants belongs in animation

The most recent installment of Movie This Book dealt with a graphic novel that looks like a storyboard for a movie adaptation, specifically of a live-action feature. Sailor Twain deals in the fantastical, but it’s so solidly based in realistic environments and relationships that it feels like a Guillermo del Toro movie, where a physically familiar world not only grounds the fantasy, but makes it seem startling and fresh. Even in a medium where audiences have long been programmed to understand that absolutely anything can happen, setting a story in a familiar place can briefly reprogram an audience to be surprised when the unfamiliar suddenly rears its spiky head.

But the realistic approach isn’t always the best mode for fantasy, and not every graphic novel suggests a live-action treatment. One of the biggest strengths of the comics medium is the way an artist’s visual style, color palette, and panel choices tell the story just as much as the writing or setting. And sometimes a graphic novel is so idiosyncratic that it feels inescapably bound up in that style. Marvel and DC Comics are getting better and better at translating their superhero comics to a live-action setting, and other creators, like Zack Snyder with Watchmen, have aped specific comics’ visuals so closely that their films can feel more like motion comics than standalone works of art. But it’s nearly impossible to visualize Joe Kelly and J.M. Ken Niimura’s terrific book I Kill Giants in any form other than a cartoon. The series, launched in 2008 and now available as a collected trade, uses its cartoonishness to strong effect: The style is the story, and the story is the style.

Like Sailor Twain, I Kill Giants starts in a familiar environment, in this case a fifth-grade classroom on Career Day, where a parade of parents is explaining their jobs to the students. But one kid is reading a book instead of paying attention. When challenged, she says she doesn’t need to think about her future career, because she already has one: “I find giants. I hunt giants. I kill giants.” 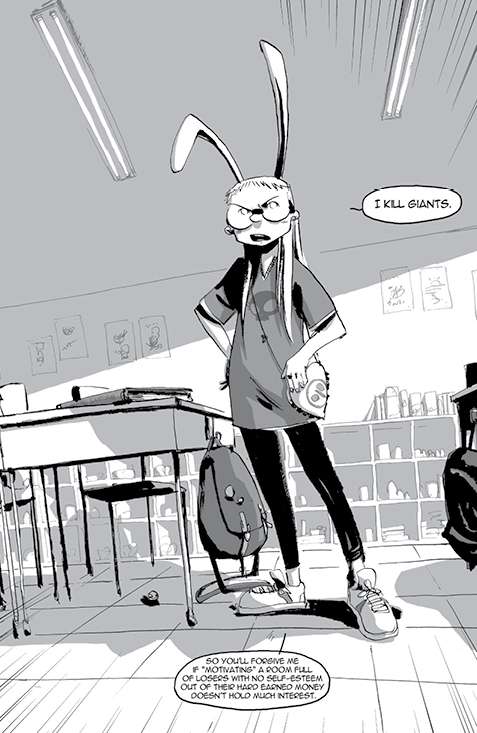 This is Barbara Thorson, a defiant, self-possessed kid with a huge but melancholy personal agenda, and one of the best, most unheralded comics characters of the 2000s. Barbara comes across as weird and immature in some ways, like in her habit of wearing cutesy animal ears to school, and the way her inability to rein in her resentment makes her problems into everyone else’s problems. She’s a problem kid, but she still comes across as a bit of a wish-fulfillment character in her sureness and her oddball version of nobility. In an era defined by insecure, self-questioning, or clumsy teen-girl heroes, Barbara stands out for her utter fearlessness in the face of generic threats. The problems that define so many school stories—mean teachers, clueless administrators, bullies, trivial concerns like grades or popularity—don’t mean anything to Barbara. She’s a self-proclaimed giant-slayer. Just incidentally, she’s a self-proclaimed giant-slayer in a world where there don’t appear to be any giants.

I Kill Giants is riveting in part because it plays a careful balancing act with the audience, moving Barbara forward through her daily adventures without making it clear what’s really going on with her, and what her story is really about. Is she a loud brat with too much imagination and no connection to the real world? Is she tapped into something supernatural and dangerous that no one else knows about? Is she creative or delusional? Is she the audience’s hero, or not?

Author Joe Kelly is an experienced superhero writer who’s tackled a ton of titles for DC and Marvel, and has written extensively for TV animation, including his co-creation Ben 10. He knows how to stage a superheroic action sequence with significant stakes, which becomes important later in the story, but the early going makes it clear that he doesn’t want to label Barbara as a hero, or clue the audience in on where they stand with her. Her courage is admirable; her belligerence isn’t. She crosses the line between self-confident and obnoxious easily and often at school, responding to one bully’s attempted lunch-money extortion by spitting in her hand (“That’s all I got. Keep the change.”), and standing up to a snide gym teacher by upping the ante with a crude attack on the woman’s sexuality. Barbara lives in a state of anger and contempt toward the day-to-day world she lives in, which makes her pretty horrible. And when she’s being attacked, she’s especially merciless. 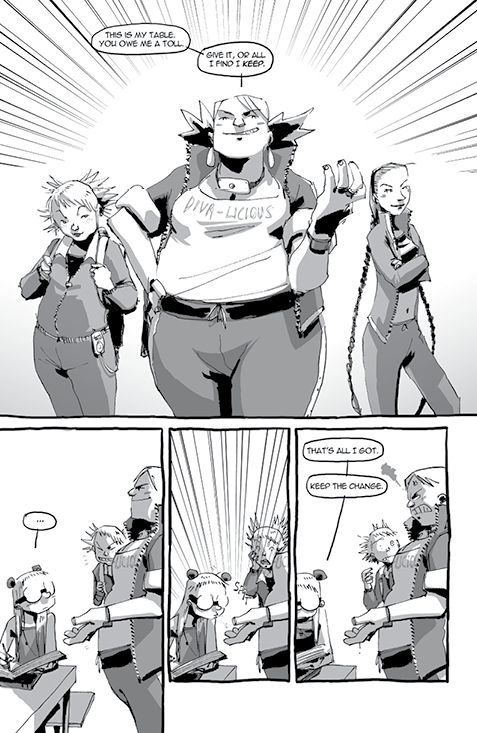 Those panels of the bully arriving, and Barbara spitting in her hand, illustrate something about I Kill Giants that runs through the entire book: It has a stylized, anime-inspired visual aesthetic, especially regarding action and emotion. Much of the art feels like it was designed with an eye more toward motion than static pages: Niimura fills panels with motion lines, or draws his characters leaning or lunging, legs or backs arched in dynamic poses even when they’re standing still. As the story continues and the action ramps up, more and more panels are given either to large physical movements, or to details that feel like they come from the living environment of a Hayao Miyazaki feature, rather than the fixed environment of a comics page. When Barbara attacks the school psychologist, Niimura draws the action in an impressionistic blur that almost makes the page feel like animation. 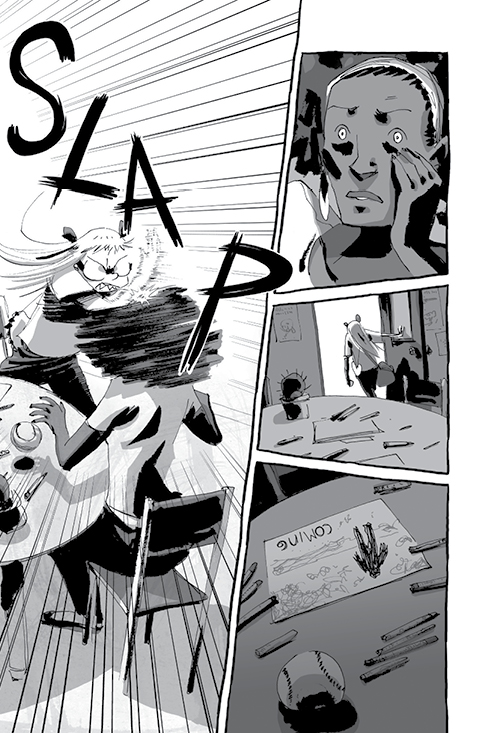 But it isn’t just the sense of motion that suggests I Kill Giants would look terrific on the big screen. Readers learn early on that something is going on with Barbara’s perception of reality, though Kelly and Niimura again keep the lines blurred, setting up a tension between what readers may suspect about her, and what they actually see. She’s surrounded by little winged sprites that no one else notices, and she has experiences with dark corridors and oppressive lights that suggest she’s being haunted by a larger supernatural force that she’s facing alone. But Niimura’s art gives her a surrealistic, subjective side that sometimes suggests that everything readers are seeing is just expressive color. When Barbara has a bad experience with a would-be friend whose approval she desperately wants, she turns up at the bus station in full plate armor, suggesting her defenses are up. But no one else sees the armor, any more than they see the little naked winged man grilling her about what’s going on in her head. The suggestion is that all of it—the armor, the pixie, the giants—may be in her head.

The narrative of I Kill Giants strongly suggests a Miyazaki movie, with its sparky young-girl protagonist and its queasy sense of an unpredictable, malevolent magical world existing close by the physical one, and in danger of overwhelming it at any moment. Even the emotions feel like a Miyazaki movie: As Barbara tries, proudly but awkwardly, to make friends with her new schoolmate Sophia, her mixture of brassy determination and hesitance feels straight out of the Miyazaki playbook. So does Barbara’s family, a fractious group led by her older sister, who means well but doesn’t know how to deal with Barbara’s growing problems. Barbara’s conception of giants is reminiscent of the towering behemoth at the end of Princess Mononoke; the friendly little fairy-creatures who follow her around are a reminder of similar critters in films from Spirited Away to My Neighbor Totoro. And when, for once, Barbara finds herself in a settled emotional place, her view of the world fills up with wild images recalling the fantasy parade of Pom Poko: 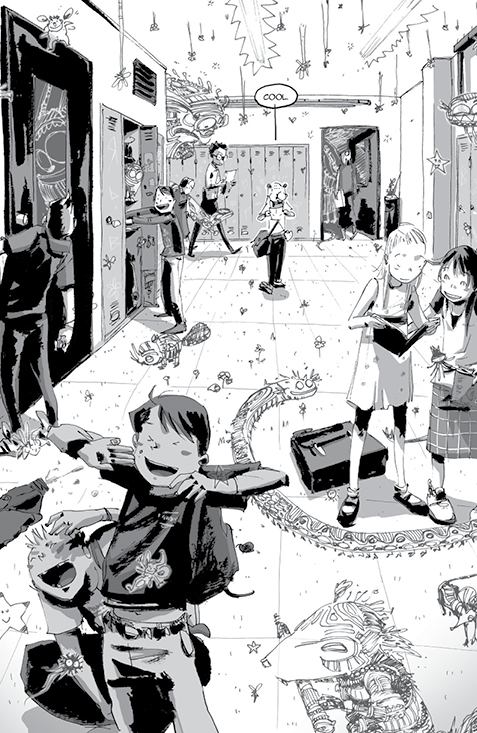 And yet I Kill Giants looks nothing like a lush, vividly colored Miyazaki movie. It’s closer to the scratchy line-art style of a different Studio Ghibli project, My Neighbors The Yamadas, the only film that stepped away from Ghibli’s house animation style to stick with the style of the source material, Hisaichi Ishii’s manga series about the day-to-day adventures of the Yamada family. In the same way, a film adaptation of the book would almost certainly be best-served by preserving Niimura’s art, which stylizes Barbara’s world to the point where the fantasy touches integrate seamlessly instead of standing out. In the same way live-action or extremely realistic drawing can ground the fantasy elements in one kind of story, the scrawly, energetic sketchiness of I Kill Giants loosens up this book’s sense of reality. And that’s much of Kelly and Niimura’s brilliance here, in the way they use their specific artistic choices to help their audience question what’s real, without falling back on having the characters ask or underline that question.

Even beyond an intriguing story and an appealingly oddball visual style, though, I Kill Giants would stand out on the big screen because it has the taut emotional drama of a great cinematic story. It’d be a shame to spoil too much about where the plot eventually goes, because in some ways, it’s a conventional screen story that would sound small in description. And yet in execution, Kelly and Niimura give it a vast scope and energy. It could easily play as a monster movie or a modern horror movie, with the haunted tension of a supernatural story like The Orphanage mixed with the big, stately action of Pacific Rim. The later going, particularly, would look fantastic on the big screen, as Barbara’s internal conflicts expand up to the giant size she’s been warning people around her to expect all along. At heart, I Kill Giants is about finding a way to visualize one girl’s overwhelmingly powerful emotions via dynamic action. In a cinematic field that often struggles with exposition, overacting, and clumsy voiceovers in an attempt to communicate what characters are feeling, it’s hard to imagine an approach better suited for the big screen than externalizing the internal, and making it thrilling at the same time. 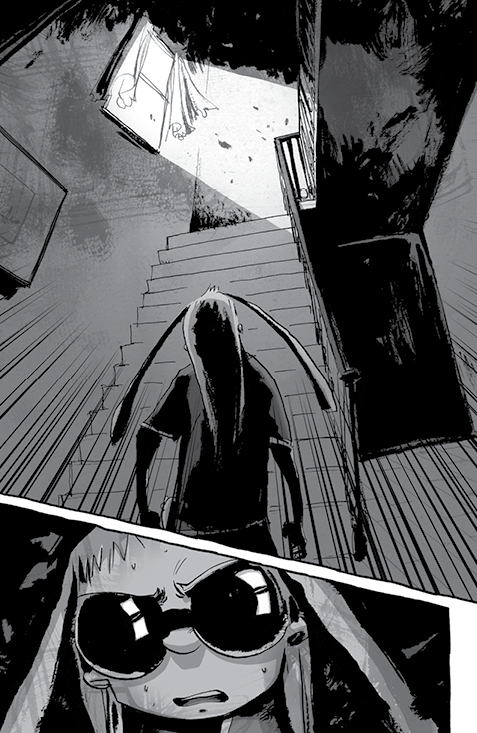