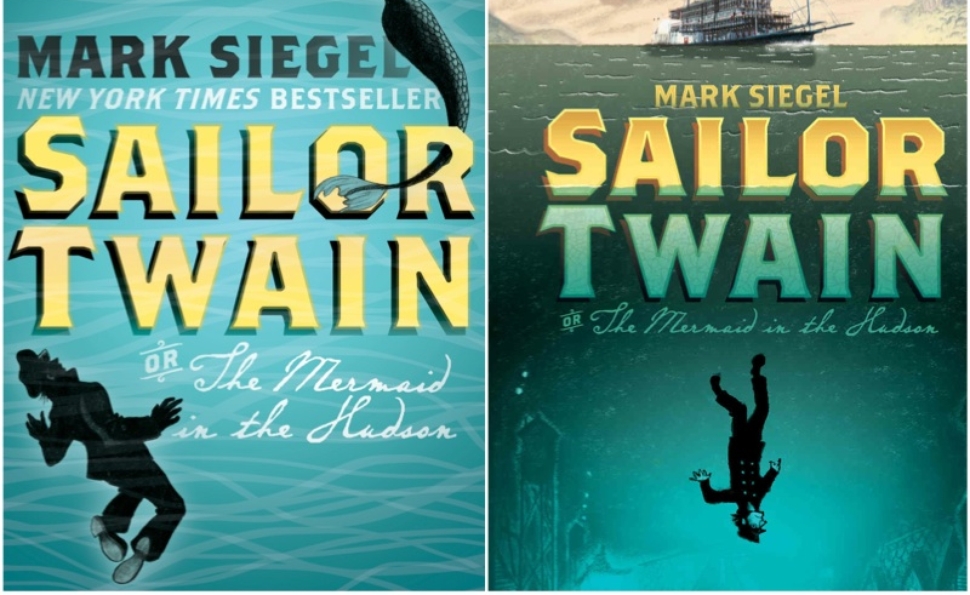 A bestselling 2012 graphic novel serves as its own film storyboard

It seems reductive to say a given graphic novel looks like the storyboard for a film adaptation of its story; it’s taken a long time for America to recognize comics as an art form in their own right, and seeing one first and foremost as a process piece for creating a different type of art feels like a step backward. It’s like saying, “This album sounds like a film score,” or, “This painting would work nicely as a bit of background color in a scene shot in an office.” Even when those descriptions are true—and certainly there are people who have to think in these terms every day as they make films—the creators of the album, painting, or graphic novel in question may not appreciate seeing what they feel is a complete work being addressed as a lowly component part for someone else’s project.

But it’s hard to escape the comparison with certain graphic novels, the ones that take the focus past the characters and into the environment around them. Most mainstream comics are simply illustrative, using those worth-a-thousand-word panels to show big, superheroic action rather than telling about it. It’s usually the smaller-press art comics that take the time to not just build a world, but to visually explore it in a cinematic way.

Mark Siegel’s bestselling graphic novel Sailor Twain, Or The Mermaid In The Hudson, is one of the latter—a book that so clearly captures a tone and an environment, as well as a story, that it already feels like a movie. First released in 2012, and now freshly released in paperback, Sailor Twain is more aware of the invisible camera than most graphic novels—so aware that it’s almost possible to feel the camera’s movement from frame to frame, because the transitions are smooth enough to suggest when the camera is moving, as opposed to when the editor is cutting. Siegel has an instinct for how the frame’s positioning helps tell a story, not just by fitting all the important details together to be captured, but by alternating long and medium shots with close-ups specifically to convey information and evoke mood.

Consider this early spread, where he follows two men walking up the gangplank off a boat together, seen from enough distance that their grey, rainy surroundings are captured as well. As one man hesitates, the frame, suggesting a moving camera, follows the other. Then Siegel drops back, moving the perspective behind the first man’s bowed head so his face isn’t revealed. At this point, early in the story, readers don’t know why the first man has suddenly stopped in the act of leaving the ship, or what his face might reveal about his situation, but his body language suggests what he’s feeling, and the long shot leaving the second man in silhouette conceals his motivations as well. It’s a neat little bit of visual storytelling, of the kind more often seen on screens than on pages: 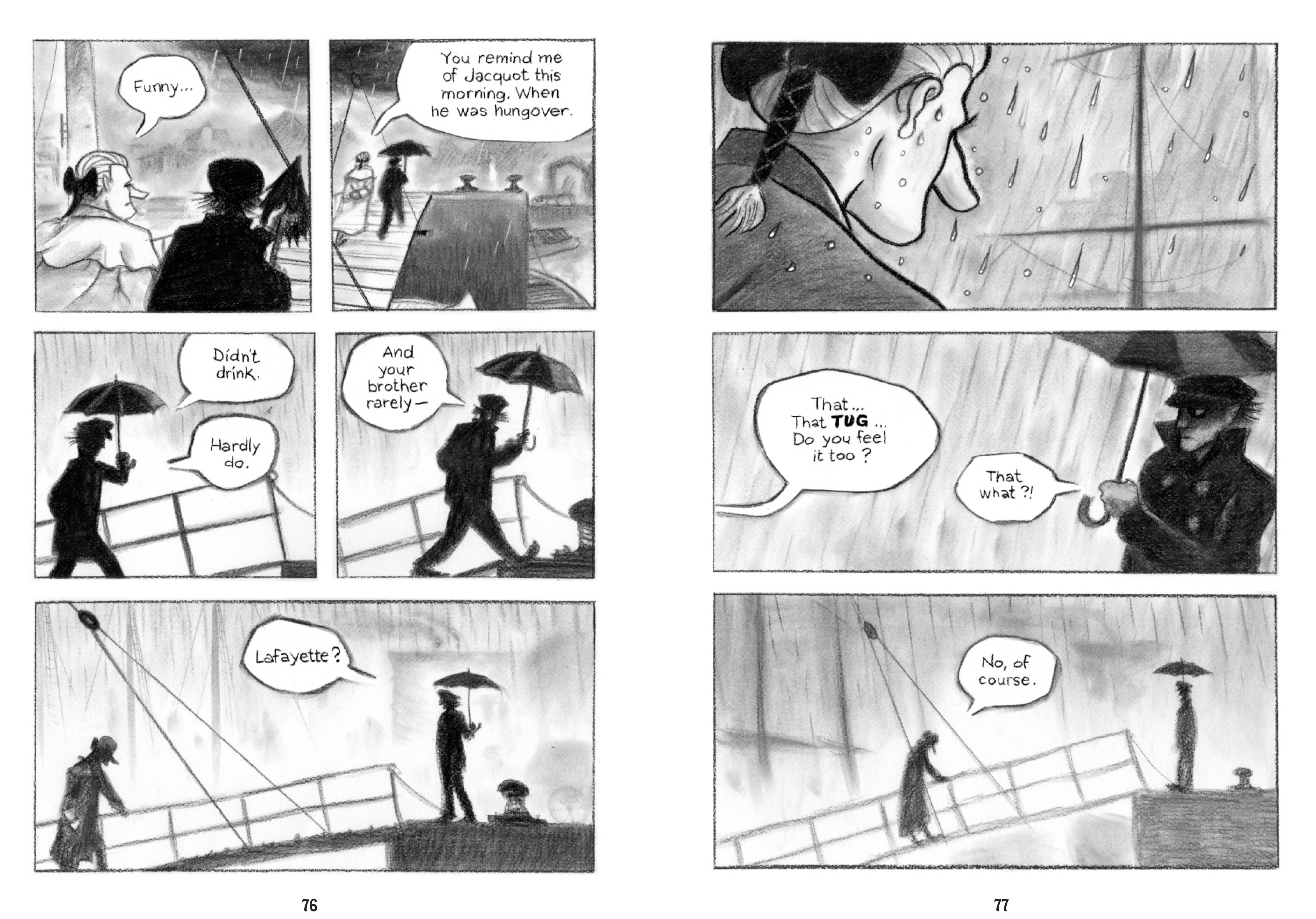 Siegel’s storytelling style begs for a film adaptation, and is halfway there already, but style alone wouldn’t matter if the story itself wasn’t evocative and cinematic. Fortunately, it’s as screen-friendly as the visuals. Sailor Twain takes place in 1887, in a steamship taking passengers up and down the Hudson River. It primarily follows the two men seen in the panels above: Dieudonné de Lafayette, the French owner of the steamship Lorelei, and Captain Twain, who handles the day-to-day management of the vessel and her crew while Lafayette socializes with the passengers, and romances many of the ladies on board. Twain, who has been married for seven years to a spunky but quiet woman named Pearl, holds Lafayette in contempt, but is secretly fascinated by his colorful sexual adventures and casual European rejection of American Puritanism.

Then Twain finds a badly wounded mermaid clinging to the side of the ship, and takes her into his cabin to nurse her back to health. Her very existence fascinates and dizzies him, and his stalled-out creative writing surges with this mysterious creature as his muse. Her open sexuality and the mystery of her existence haunt him, and he walks through his days in such a daze, thinking about getting back down to his cabin to see her again, that he barely notices how Lafayette is breaking down in his attempts to keep up relationships with six women at once, while seeking a seventh. Lafayette, it turns out, is researching mermaids and corresponding with a famous author about them, but Captain Twain is so lost in his reverie that when he steals Lafayette’s notes, he’s more intent on fueling his own obsession than on considering why his boss shares it. 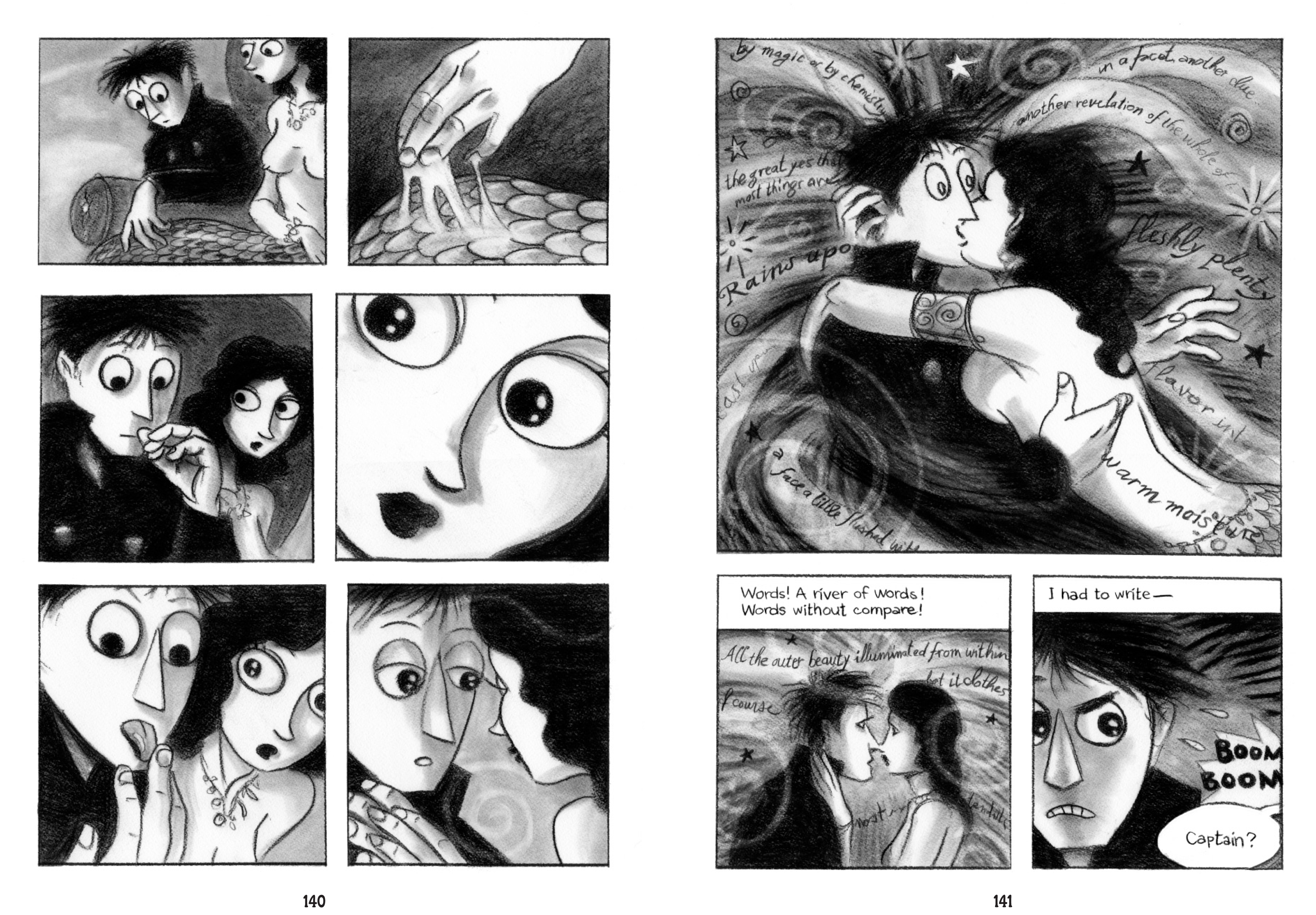 There are two primary tracks to Sailor Twain, and to the degree that the story has a weakness, it’s in the way Twain’s encounter with the mermaid takes over the middle of the book so firmly that Lafayette gets lost. By the time the focus shifts strongly back to him, he no longer feels like a significant character. That makes the book’s endgame feel unbalanced, with shifting sympathies and a sense that the story is losing track of Twain, instead.

But while the direction Siegel picks for his story is surprising, it’s also part of what invites a cinematic adaptation. The book starts languorously, exploring the Hudson river and the Lorelei with a cinematographer’s interest in how late-1800s New York looks in the rain, and how the ship’s passengers dress and act. It moves into a character study, with Lafayette and Twain clashing over their perspectives on life and particularly on love and romance. The introduction of the mermaid is a shocking moment in a book with no previous fantasy elements; it feels uncanny and unsettling, like the first glimpse of a monster in a horror film. As Siegel explores Twain’s relationship with his mermaid, though, he delves deeper into Twain’s mental realm, and the book becomes beautifully surreal, with Twain visualizing his own cabin as a transformed underwater space, more the mermaid’s home than his own. And beyond that, the story heads into action territory, first with an imaginative setting that would do the Guillermo del Toro of Hellboy proud, then with a heady, violent confrontation that would satisfy the Guillermo del Toro of Pacific Rim just as much. 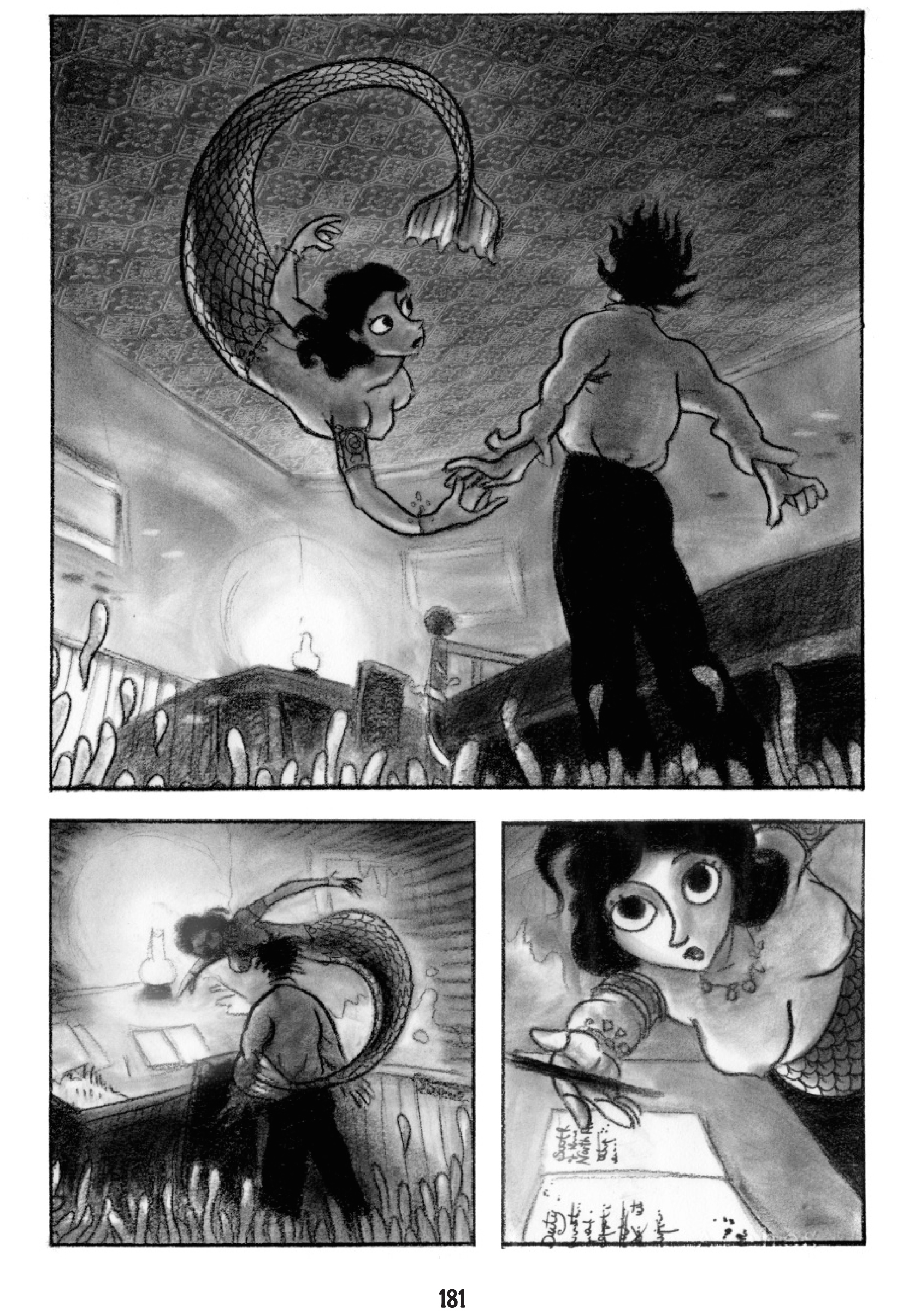 One of the elements that makes Sailor Twain feel so ripe for the screen is the way Siegel deals with his fantasy elements. Fantasy movies, like fantasy books, sometimes lack the inherent grasp on reality that lets audiences empathize and connect with the more outlandish or stylized elements. But Sailor Twain is closer to the culturally rooted, moody real-world fantasy of Ondine or The Secret Of Roan Inish (two strong films that also deal with legendary sea creatures) than the high-blown fantasy fluff of Legend, or the abstracted, busy CGI action-fantasy of the Percy Jackson movies or the Clash Of The Titans remake and its sequel. Siegel’s book is firmly grounded not just in a place and time, but in human emotions: love, lust, jealousy, fear, the urge to create, the need for freedom, the desire to be part of something larger and more wondrous than day-to-day life allows. His setting—a restrictive, mannered era and society, focused on propriety and rules—helps keep the story’s wilder elements in check, and sets up a strong sense of contrast and release in Captain Twain’s escapism.

Sailor Twain is so well-grounded in those aspects of human life that even though it’s a fantasy story with some elaborately sensual elements, and even though graphic novels usually suggest a visual art style for any adaptation, this book still invites a live-action film more than an animated one. Part of that comes from Siegel’s particular type of stylization: His soft-edged black-and-white art is highly specific and granular when he’s detailing certain settings, like the Lorelei as seen from a distance. Like so many artists, he uses specificity in the environment to draw viewers into a world that might otherwise seem too fuzzy and unpredictable in the fantasy details to seem real. 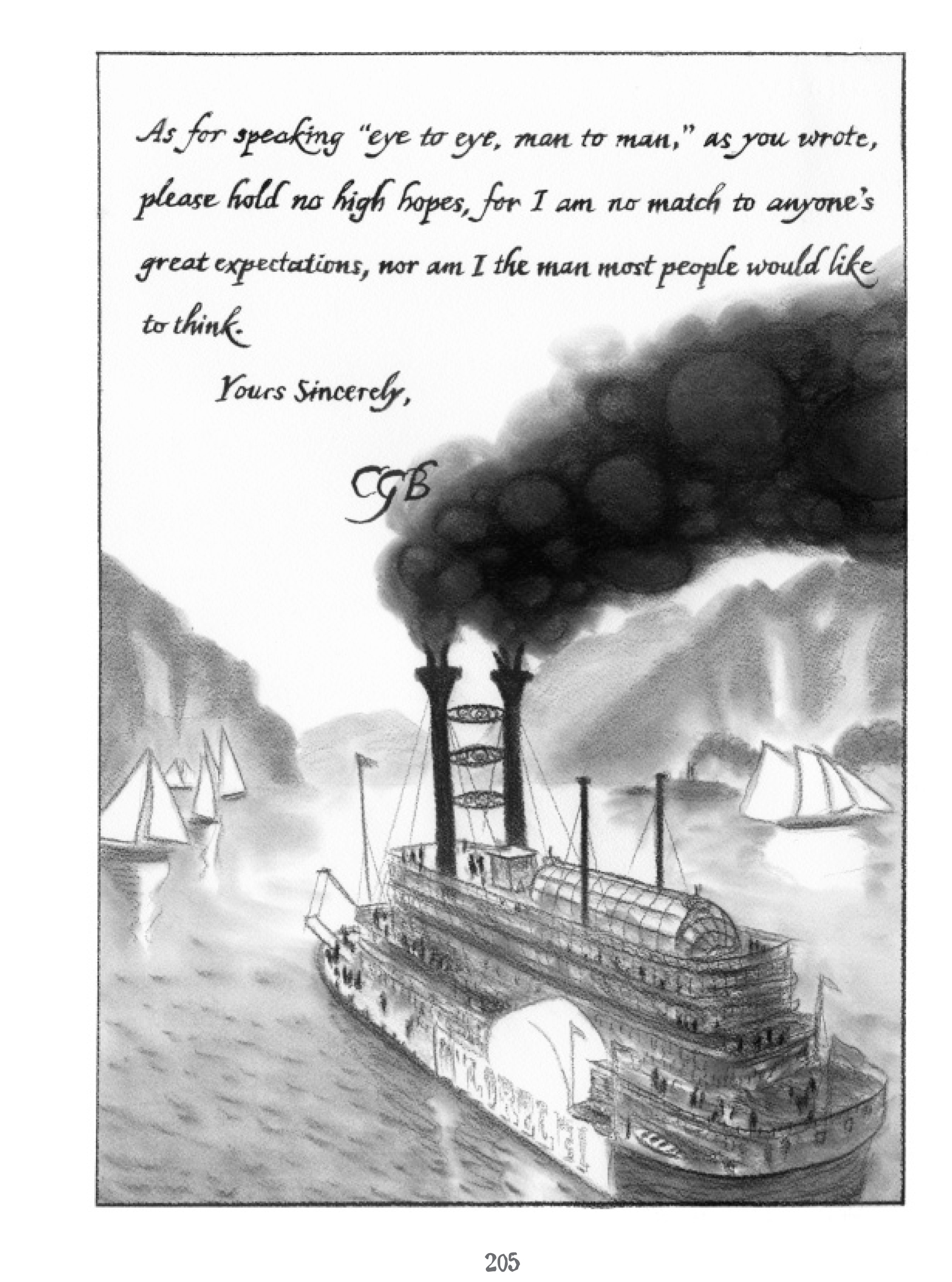 But his art is scratchy and simple when he’s looking at human characters, and it’s often abstracted to the point of distortion and caricature, as Captain Twain’s eyes take over half his face, or Lafayette’s probing, crooked, suggestive nose looks longer than his hands. Part of the reason the book feels like a storyboard is because of its sketchiness and the way it abstracts its characters into postures and emotions. Captain Twain’s face is rarely very expressive, except when he’s boggling with wonder over his mermaid; mostly, it’s a suggestion of wide eyes and a persistent glare, while Lafayette is mostly a font of banked wistfulness that sometimes gives over to despair. Siegel focuses more on their positioning than the details of their faces, and draws them simply even when he’s being highly detailed about framing, movement, and even lighting. His book feels like a storyboard because it often seems more concerned with the camera than the characters, and with relative places and postures than with illustration. There’s nothing wrong with that: It seems designed to excite readers’ imaginations. 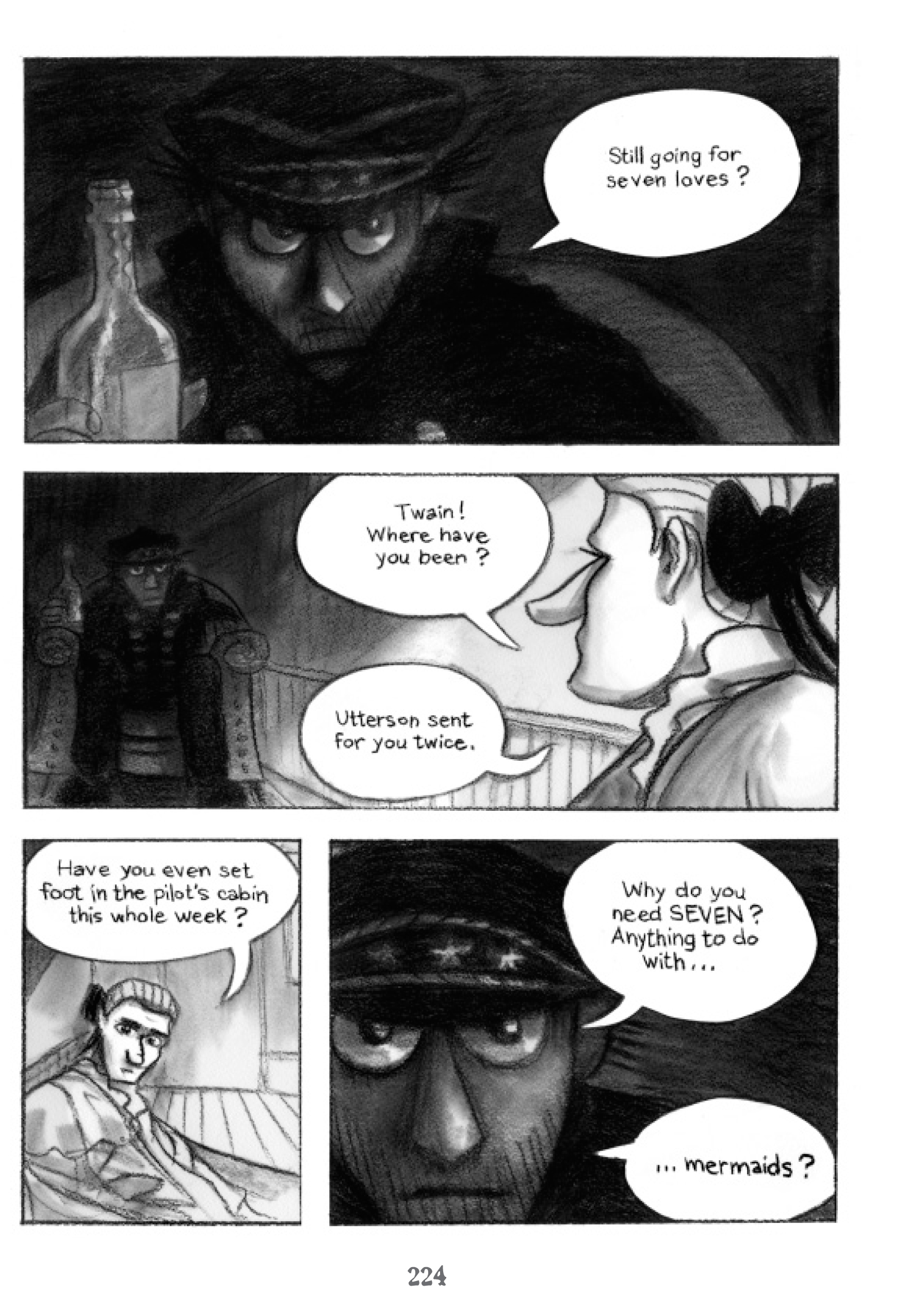 But like all good book-to-film prospects, Sailor Twain invites adaptation first and foremost because it has so many gripping elements: comprehensible characters who are iconic enough to be established with a few simple scenes, but mysterious enough in their motivations to keep viewers guessing. A winning mixture of moody musing and direct, thrilling action. An unusual setting and a daring narrative. The fact that it does half a director’s work up front, by using the medium to tell the story like a filmmaker would, is just a bonus. Siegel brings Sailor Twain across as a film so clearly that anyone reading it can see the reels unspooling as well.

Next time: For contrast, another real-world-grounded, recent black-and-white self-contained graphic novel that suggests an animated film instead.