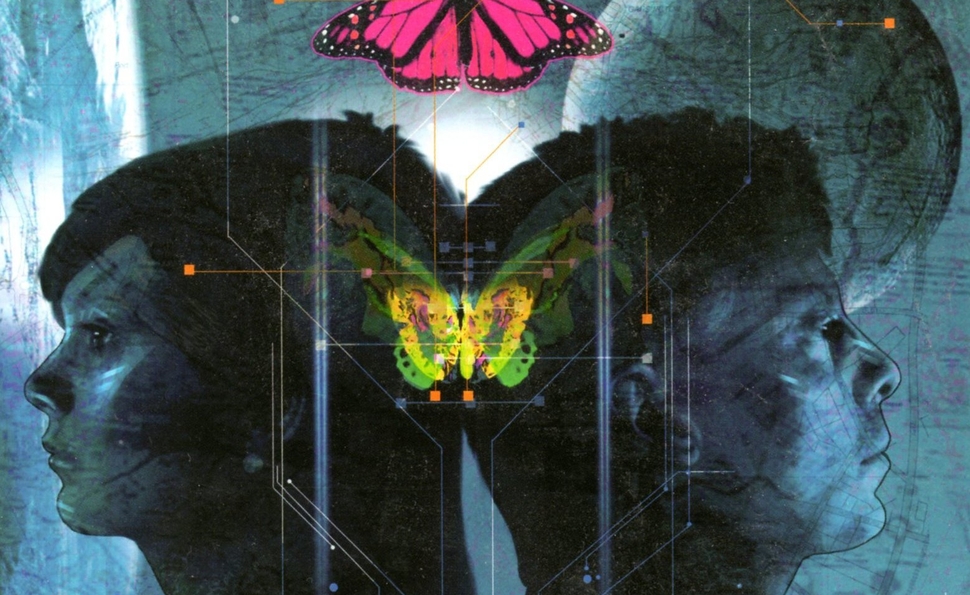 I got weird looks around the Dissolve office when I admitted that my only problem with Spike Jonze’s lovely 2013 film Her was that the ending seemed too familiar. Without getting into its specifics, it’s a typical story about the Singularity—an idea so common in modern science fiction that it developed its own backlash. As of 2009, according to io9, SF literature had gotten its temporary fill of the technology-as-magic, computers-as-people futures of exactly the kind Jonze presents in Her; authors were looking for new directions, because Singularity stories had oversaturated the market. I had to be gently informed that for people who aren’t familiar with the genre, the end of Her seems wild and unprecedented rather than predictable. In a way, it’s a My First Singularity story, a gentle, accessible introduction to the concept of a shining post-scarcity future where technology can accomplish almost anything, including creating the perfect love objects for lonely, confused narcissists.

But for people more versed in the field, the idea of the ubiquitous, perfect electronic wish-fulfillment companion goes much further back than Jonze’s film, and the trope has been employed for all kinds of fascinating stories. One of the all-time best examples of the genre feels like a story whose cultural moment has come: If Her is a set of Singularity training wheels, John Varley’s 1993 novel Steel Beach is a revved-up Harley, waiting to be taken for an energetic spin.

Her’s emotional resonance doesn’t come primarily from its smart computers and polished surfaces; it comes from the smart, sympathetic way Jonze taps into the isolation of a society where everyone is closeted into their own technologically enhanced, individually designed worlds. It’s a metaphorical but accessible story about the difficulty of human connection in an age when the privileged are distracted by endless minor diversions and entertainments at all times. Steel Beach taps into similar concerns, but sets its story against a much bigger and more fantastical backdrop. It has Her’s emotional richness and empathy, but complicates it with more incident and action. As a film, it has the potential to find the audience crossover point between Her and films like I, Robot and Minority Report—and maybe even satisfy fans of both.

At heart, Steel Beach is about a character looking for purpose. The book takes place in a setting Varley’s stories often return to, in a future where humanity has settled on the moon, and technology has advanced to the point where lifespans extend for centuries, everyone can stay young as long as they want, and easy surgery lets people design and redesign their own bodies. Gender has become entirely fluid, and sexuality and identity are complicated: The protagonist of the book, Hildy Johnson, is a tabloid reporter who took the name of a reporter character played in 1940’s His Girl Friday by Rosalind Russell, and in 1974’s The Front Page by Jack Lemmon. Like the original Hildy Johnson, the book character doesn’t have a fixed gender; Hildy begins the book as a man, but eventually trades himself in for a female version, and not for the first time. In a society where people hop into new bodies whenever they want a lifestyle change, the decision isn’t quite on the order of changing sweaters—it does affect how Hildy relates to the world—but it still isn’t much more life-altering a choice than swapping out a compact car for an SUV.

The mid-story gender-swap would likely be the hardest part of Steel Beach for a film audience to deal with, given how movies are so often marketed on familiar faces and the strength of one relatable protagonist. (Not to mention the still-prevalent myth that male viewers aren’t interested in female leads, which seems an increasingly dated, parochial perspective given that 2013’s No. 1 box-office success was The Hunger Games: Catching Fire, with Frozen and Gravity also in the year’s top 10. That’s another essay, however.) Even in a world where I’m Not There gave viewers six different actors (one of them female) all playing Bob Dylan in different modes, or Orlando had Tilda Swinton swapping genders, it’s hard to see how an audience will take a character that changes from an older man into a younger woman.

But the gender-switch is part of what makes the story universal. Steel Beach isn’t about a man’s problems, or a woman’s problems: It’s about life issues, and how they affect people equally. It’s also profoundly daring and challenging, without being underlined as a daring challenge: It asks people to look past gender identification and simple stereotyping, and just see Hildy as a person first. In an era increasingly obsessed with self-labeling and identifying every possible individual point on the gender/sexuality spectrum, Steel Beach throws out the spectrum and starts from basic principles.

Not that progressive gender identification is what will draw people to the story. The draw is how Varley uses Hildy to explore all the possibilities in a vastly colorful and complicated world. In any body, in any profession, in any combination of friendships and relationships, Hildy is increasingly disassociated, and driven to greater and greater extremes of experience.

That feeling isn’t isolated phenomenon. The novel begins with the provocative line, “In five years, the penis will be obsolete.” The line comes from a salesman touting the latest of a long line of purchasable sexual and sensory experiences. Hildy’s boredom and cynicism in covering the salesman’s press event says everything about the world of Steel Beach, where the entertainments are diverse and the possibilities seem endless, but nothing seems new. There’s a lot of provocative humor in the sales pitch, and in the way Varley draws the world by illustrating the drug-and-sex-fueled entertainments people focus on when given unfettered, consequence-free access to hedonism. But for Hildy, it’s all become dull and rote. Early in the book, the character quietly, without comment, commits suicide.

There’s no immediate explanation for the way the story simply continues from there, with Hildy getting back to work, not mentioning or even thinking about the experience. That’s an overarching mystery that takes a while to unravel. In the meantime, there are plenty of other plot hooks: Hildy spending time with a death-sport participant who’s gotten into a complicated bind. Hildy dealing with an asexual young cub reporter (self-styled as Brenda Starr) who represents a whole new generation of people with new assumptions about how the world works. Hildy observing the fatal negotiations with the brontosauruses at a brontosaurus farm, and dealing with a murder mystery involving the newest deified pop-culture star, and becoming a school teacher, and discovering an outsider cult living on the Lunar surface.

It’s a lot to take in, and it gives studios some interesting options. Steel Beach could, in theory, be pared down to its core story, which looks a lot like Her: Hildy is unhappy, to a degree understood only by the moon’s Central Computer, an immensely complicated artificial intelligence that runs all life support and systems, is wired into an interface with everyone on Luna, and functions as a constant helpful companion to everyone individually. Hildy isn’t as interested in a personal relationship with her AI as Theodore Twombly is with Samantha in Her—the CC fits every user’s specific needs, and Hildy has settled into something more like Sam Bell’s relationship with the GERTY robot in Duncan Jones’ excellent Moon. But that sense of a constant concerned presence, and an intimately personal individual relationship, remains the same. At its most basic, a Steel Beach movie could be about Hildy’s depression and search for meaning, and the CC’s concern and attempts to intervene—and its own highly dangerous struggle with depression, brought on by dealing with so many depressed and suicidal individuals. Taken on that level, the film could be as small, personal, and idiosyncratic (and as cheap to make, potentially) as Her and Moon. 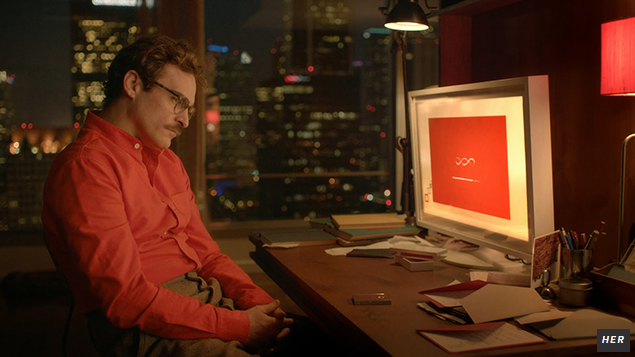 But a studio looking for a franchise—as most of them seem to be—could tap into Steel Beach for a series the size of a given Marvel Cinematic Universe phase or the Hunger Games series, both in terms of big-budget blockbuster action, and in terms of a long-term developing story. Hildy’s depression, search for self, suicides, and relationship with the CC—which builds to an extremely dramatic conclusion—form a through-line that would hold a franchise together. It allows for a great deal of character development and commentary on personal connection, and provides shelves for any up-to-the-moment ideas a filmmaker might want to address, regarding how people interface with technology, identity, sex, entertainment, violence, work, parenthood, or purpose.

But Varley has used that spine to build a series of stories as big and colorful as any action director could possibly want. A trilogy could, like the Hunger Games films, be built around three separate stages of discovery as Hildy unravels the question of what’s going on with the Central Computer, an essentially omnipotent machine with an unprecedented level of control over its users’ lives. Like the superhero movies leading up to The Avengers, a series could introduce memorable characters while giving them their own adventures, and building up to a massive payoff. Like the Hunger Games films, it could focus each film on an individual sub-story with its own arc. (The rock-star murder mystery is a particularly good one, culminating in a daring heist where Hildy, Brenda, and a writer for a competing tabloid compete to steal an autonomous, Futurama-style head-in-a-jar that has the answers they want.)

And while the detail of those individual stories sound outré and bizarre, they’re built around the kinds of cinematic models already familiar to the mainstream audiences who embraced Star Trek Into Darkness, Avatar, Tron, or Total Recall. They’re stories of conspiracy, mystery, and discovery, with a lone intrepid seeker battling an oppressive future in an action-filled environment. They’re weird, but thrilling and action-based enough to be accessible. And they’re a sly window into an amazing, creative, strange world.

More significantly, though, they’re a delivery vehicle for the philosophical questions about what life is all about. Hildy is an extreme case, living in a world without poverty or privation, and trying to decide whether a life without struggle holds any interest. Cinematic utopias usually come with a matching dystopia: Exploring inequities between the haves and have-nots via metaphorical futures has been a science-fiction staple since H.G. Wells’ 1895 novel The Time Machine. It’s harder to find a gripping story when the protagonists already have everything they could possibly need.

That’s exactly what makes Steel Beach unique: It solves the utopia-story problem by asking what comes after contentment, and finding struggles that are still worth fighting even though they don’t involve Big Lies and oppressive Brave New World-style regimes. Where Her offers a protagonist paradise and then takes it away, Steel Beach strands a protagonist in paradise and asks, “What makes this worthwhile?”, then answers the question in a variety of thrilling ways. It’s Varley’s biggest book, in story scope and conceptual ambition, and it repeatedly asks the right questions without giving in to easy answers. It could, only incidentally, look dazzling on a big screen. But it could look dazzling while grounding its story in personal considerations that will always be relevant. It’s a strange beast: a huge story that operates at the intersection of insane speculative futurism and the relevant present. But if handled right, it represents an impressive opportunity to, for once, unite cerebral SF fans with action SF fans. It’s like the Singularity itself, with all things coming together to form a single shining whole.