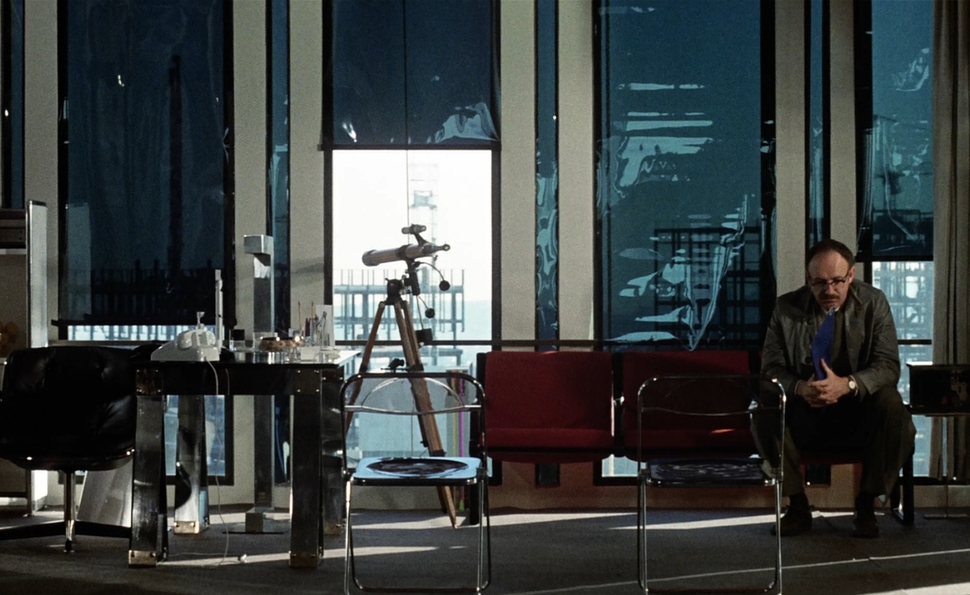 by Keith Phipps and Nathan Rabin

Keith: There are fewer hotter filmmaking streaks than the one Francis Ford Coppola enjoyed in the 1970s. From The Godfather through Apocalypse Now, Coppola seemed incapable of making anything but masterpieces, films with stunning executions to match their ambition. Released the same year as The Godfather: Part II, The Conversation is the smallest of those films, but it would be wrong to characterize it as minor. It’s a probing character study of a man—Harry Caul, as played by Gene Hackman—who resists having his character studied. It’s a remarkable technical exercise, stunningly edited by Walter Murch into a disarming mix of sound and image. It’s a neatly executed thriller with a killer twist that also doubles as nothing less than an inquiry into the nature of reality. Much like Michaelangelo Antonioni’s Blowup, an obvious point of inspiration, it uses a mechanical reproduction of a moment—in Conversation, an exchange in a busy city square, edited together from several different recordings; in Blowup, a photograph—to illustrate how futile our attempts to understand the world can be.

There’s a lot to talk about here, but maybe we should start with the conversation itself, which gets played a lot in the film, but never used in exactly the same way. Words take on different meaning with repetition, and as the context shifts. The first time Ann (Cindy Williams) notes that when she sees a homeless man, she thinks he was once somebody’s little boy, it sounds banal. Repeated, it sounds increasingly mournful, a fatalistic expression that matches the tone of the film as the danger around Harry mounts. And with the final revelation, it becomes an ironic expression of compassion for human life.

Nathan, what elements of the film stand out to you most immediately?

Nathan: I was fascinated by the talk between Cindy Williams and Frederic Forrest for a number of reasons. In part, because it’s so fascinating in both its surface banality and its underlying crypticness. We don’t ultimately know what they’re talking about, any more than Harry Caul does. Are they hopeless pawns? Victims? Or something more sinister? I don’t think it’s coincidental that Harry is a jazz buff. The endlessly repeated conversation at the heart of the film begins to take on an almost musical quality, with its repetition, circularity, and shifting emphases. 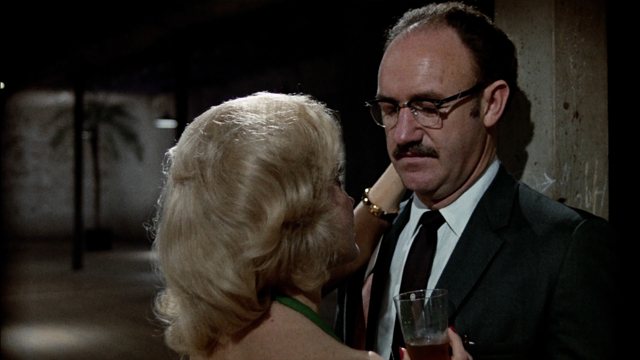 You talk about The Conversation only seeming minor compared to The Godfather: Part II. I see the films as complementary. With Part II, Coppola set out to tell the story of the United States and capitalism through the Corleones’ saga. Here, his fascination is almost completely with the interiority of the main character. The result is a hypnotic character study of a man who adopts a mask of bland anonymity as a professional precaution. So now might be a good time to talk about the performances. Where the Godfather movies had sprawling casts, The Conversation’s ensemble is tiny, and every role matters, from Williams to Allen Garfield as Bernie. What did you make of the handful of strange characters Harry surrounds himself with? And do you share my affection for the weird “Sinister Functionary” phase of Harrison Ford’s career?

Keith: It takes real skill to make such a fascinating character out of someone we know so little about. Yet Hackman’s performance suggests so much while giving away so little. He’s a secretive man intent on protecting his privacy above all, and that could have been the easiest of easy ironies in this movie. But Hackman keeps suggesting its roots go a lot deeper than we’re allowed to see. Even the incident in his past, teased out over the course of the film, in which his work ended in the death of two of his subjects, seems more like a realization of pre-existing fears than the cause of his current condition. Factor in the Catholic guilt, and it gets even more complicated.

He’s also, as you point out, a sharp contrast to those around him. Others in the profession are characters in the colloquial sense of the term: They laugh easily, they kid each other hard, they drink a lot, and their conversations double as challenges. Harry’s not that, but even surrounded by a bunch of larger-than-life types who admire but also envy him he holds his own. If nothing else, he’s an adaptive person and a problem-solver, even finding a “solution” to his loneliness in Amy (Teri Garr), who seems okay with the strange terms of their relationship and his surveillance of his every move—until she isn’t.

Coppola makes great use of Ford here and in Apocalypse Now—as another sinister functionary—suggesting he could have had a great career playing menacing creeps if Han Solo had never happened. But then, Coppola makes great use of everyone here. I always forgot Robert Duvall is in this movie until he shows up, but who else could have embodied a man isolated by power and money as well? 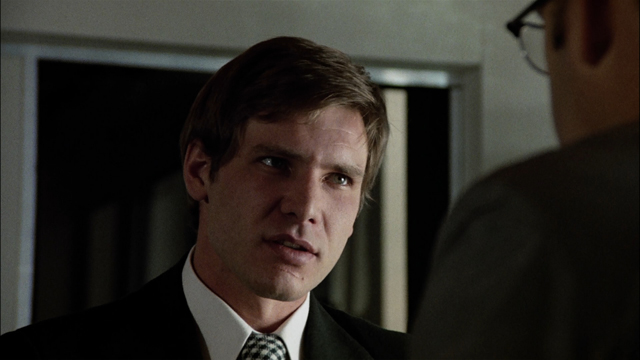 I want to talk about the music further. David Shire—who also did the awesome score to The Taking Of Pelham One Two Three—provides a spare, piano-only score that suits Harry perfectly. Meanwhile, Harry plays the sax, accompanying professional recordings as he sits alone in the room. In the end, he plays alone, in the room he’s destroyed along with all his material possessions. Is there just a hint of optimism to this? A sense he’s liberated himself? I always kind of want to read an upside into it, but can’t quite do it.

Nathan: The Conversation has one of the most harrowing sequences in cinema. Harry is a man of secrets. His life is spare and minimalistic to the point where all he has is his secrets. They protect him. They’re dangerous to himself and others. He has seemingly stripped out everything in his life but work, so he’s the sum of his secrets.

So in the final scene, we’re seeing a man stripped bare. He seems to have lost everything. But I like the optimism in your take. It suggests a possible emotional renewal for Harry, that he might escape a world of shadows and darkness, and enjoy the sun for once in his life. But I feel Harry has closed off so much of himself that that’s impossible. I can’t see him transferring his obsession with surveillance into a really nifty stamp collection, for example.

I agree that the spare score goes a long way toward conveying a mood of intense paranoia, but I think we should also give credit to Murch, who has the additional credit of “supervising editor.” Murch and Coppola create a sense of persistent unease, a world full of weird noises, glitches, and sinister sounds that could come from outer space, but are more likely the sinister hum of recording equipment. 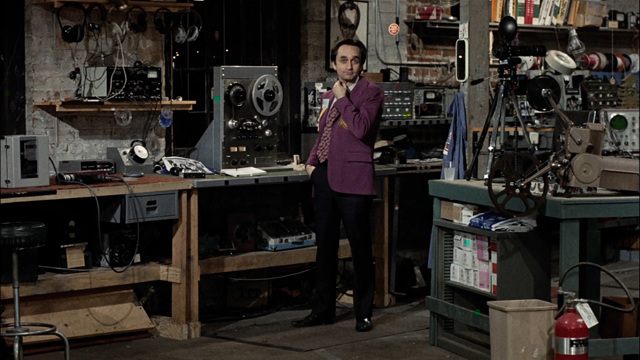 One of the many fascinating elements of The Conversation is that it is essentially a Watergate film that was released shortly before Watergate broke. It was as if it was pulling from the free-floating paranoia at the time, although with a leader like Nixon, you don’t need to be a psychic to sense that America’s commander-in-chief might have sinister motives.

You’ve been writing a lot about paranoia, conspiracies, and the 1970s in Laser Age. What do you think of The Conversation as a Watergate film? On the audio commentary, Coppola notes that the Nixon administration was spying on people using the exact same equipment featured in the film, and though he began work on the script in the mid-1960s, the film’s completion around the time Watergate was breaking gave it the feel of prophecy. Do you think Coppola knew something we didn’t? Or is it always a wise policy to be paranoid?

Keith: It’s always remarkable when art gets it right ahead of time, isn’t it? The Parallax View came out the same year as The Conversation, and while it was directly inspired by the conspiracy theories floating around the assassinations of the 1960s, it feels as locked into what’s going on in its era as this movie. When there’s something in the air, people pick up on it. And part of the pleasure of the movie is how very much of its time it is, from the fashions to the look of San Francisco to the recording equipment. Anyone who enjoys watching yesterday’s state-of-the-art technology at work need look no further.

At the same time, I think it works both because it’s a film of its time and because it resonates beyond it. “Bartleby The Scrivener” is just as rooted in the details of 19th-century Wall Street, but it’s just a brilliant as a study of alienation now as it ever was. I suspect that’s part of why The Conversation has endured, too: Technology comes and goes, but loneliness and isolation remain largely the same. I think the Harry of today might be hunched over an office in the NSA or poring over metadata for a private firm, a witness to a world he can’t touch without tragic results. 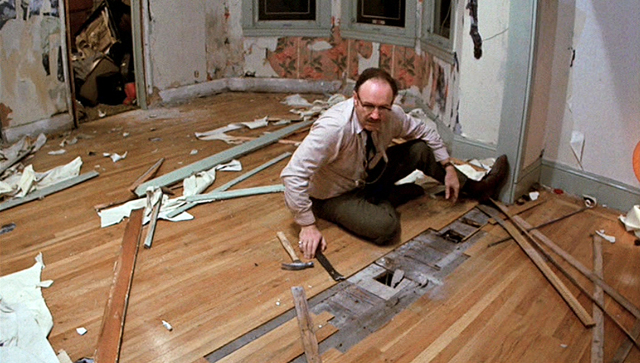 Nathan: That technology must have felt almost futuristic at the time—unseen cameras and microphones spying on the populace from a distance, complete with electronic bleeps and bloops out of an early experimental electronic album—but now, it looks as antiquated as the dinosaur-fueled technology of The Flintstones.

You are totally right about The Conversation being a product of its time, yet eternally prescient. Every time a new surveillance scandal hits, like the Snowden situation, the film is invoked. But Coppola’s antennas were finely attuned to the paranoia of the time and the sense that in the Nixon days, privacy was a luxury people only thought they could afford.

So it’s interesting to note that Hackman was one of the actors considered for the role Bruce Dern eventually played in Nebraska to great acclaim. The filmmakers were unable to lure Hackman out of retirement, and probably more than a little intimidated about trying. But if Hackman had played that lead, it would have been strangely simpatico to his performance here, in that he’d have to find a way to shut off his natural charisma, magnetism, and verbosity to play a deeply internal man of few words. The key difference is that the old man in Nebraska is in a fog as he enters his last days. Even under duress, Harry is still the best man in the world at what he does. His tragedy, and the tragedy of the film, is that it might not be enough to save him; he’s turned himself into a ghost, and if a ghost disappears, no one is liable to go looking for him.