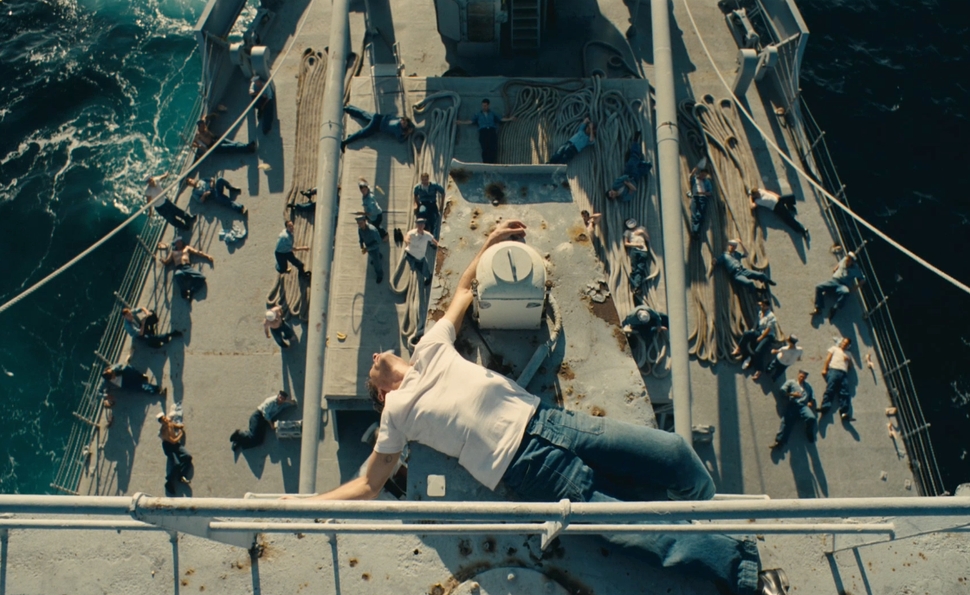 The Master offers an insane cure to a mad world

Paul Thomas Anderson’s deeply sad 2012 psychodrama The Master was inspired by the life of author L. Ron Hubbard, founder of Scientology. But Anderson has also paid vocal tribute to Let There Be Light, John Huston’s Army-funded (and then disavowed) 1946 documentary about a military mental hospital where men shattered by World War II try to pull themselves together for the sneakily rigorous demands of peacetime. As Light’s narrator asserts, these men have spent years with a goal—to kill without being killed—that has no place in their peacetime lives, assuming they don’t want to join law enforcement or re-enlist.

Hubbard was transparently the model for Philip Seymour Hoffman’s Lancaster Dodd in The Master, but the men interviewed in Let There Be Light are the primordial ooze out of which Joaquin Phoenix’s Freddie Quell emerged. Their wartime trauma is an apparent, almost unbearable burden. They shake, they stutter. They’re in such intense psychological pain that it can be difficult to look at them. In the film, psychologists use a variety of tests (like Rorschach blots) to analyze the men, but they also use futuristic-looking gizmos like an EKG machine. The process calls to mind the one-on-one auditing, e-meters, and heavily controlled communication of Scientology. That’s one of Scientology’s ironies: Hubbard declared psychology the enemy of mankind, promoting a violently anti-psychiatric belief system that still draws extensively from psychology’s tenets. The mind-healing techniques employed in Let There Be Light, such as an altered form of hypnosis, reappear as mind-healing techniques in The Master. It isn’t a coincidence.

It’s easy to imagine Freddie Quell, with his unnerving intensity and terrifying glare, being interviewed in Let There Be Light, seething with resentment that these professionals, with their clipboards, experimental new ideas, and high technology are unable to heal all that is broken within him. Quell, like Light’s suffering souls, came home from World War II to discover that the world had changed, but not as much as he had. For men like Quell, peacetime was as terrifying as war. At least in wartime, he knew what he was supposed to do. He had a job, a hierarchal structure, and goals to accomplish, both minor (win the battle) and major (win the war).

But then science won the war by introducing a new, debilitating form of terror: the fear of complete nuclear annihilation. The atom and neutron bombs represented the apex and the nadir of technology: They could end wars and save American lives, but they could also bring about Armageddon. Science promised to be both humanity’s savior and its doom. It’s easy to understand why a man as ambitious and savvy as Hubbard made the word the linguistic core of his belief system.

Is it any wonder that a man like Freddie Quell, who probably wasn’t the picture of psychological health before the war, came home confused, and looking for answers bigger and more satisfying than those he could find in work, conventional religion, and relationships? In The Master, a world gone mad invites an insane cure, which presents itself as mankind’s final hope for sanity. 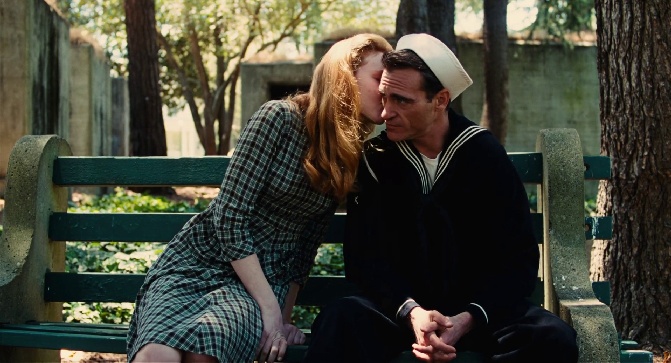 This is the troublesome world Freddie Quell returns to. The Master essentially opens where Let There Be Light ends: Freddie Quell is a damaged man. He’s hunched-over, sex-obsessed, drinking too much, and wildly indifferent to social propriety. He doesn’t look at people so much as he sees through them, peering deep into the ugliest parts of their souls with a look of feral intensity. Early in The Master, after the war ends, a crowd of former soldiers listens to an unseen officer, delivering a pep talk suggested by the one at the end of Let There Be Light: “You men are blessed with the rejuvenating powers of youth. The responsibilities of peacetime must now be considered. You can start a business: filling station, grocery or hardware store. Get a few acres of land and raise some chickens. Go back to school. Undoubtedly there will be people on the outside who will not understand the condition you men have, or will think it a rather shameful condition. If the average civilian had been through the same stresses that you have been through, undoubtedly they too would have developed the same nervous conditions.”

In Let There Be Light, the speech is meant to evoke hope and promise. The bad part is over! The world is waiting for you with open arms! Your possibilities are limitless! In The Master, they have an antithetical connotation, as the camera pans across one nervous, overwhelmed soldier after another. The business about “the rejuvenating powers of youth” is part of the cultural delusion society engages in when sending teenagers to war. The military pretends that the magical regeneration of youth will carry them through, ignoring the disabled veterans in wheelchairs begging for spare change, for whom the properties of youth don’t seem to have counted for much.

In a one-on-one interview with a Navy psychiatrist, The Master’s Freddie answers the kinds of questions soldiers in Let There Be Light are peppered with. He answers with a sexual aggression that’s become his default mode of communication: An ink blot, he says, is “a pussy, a lady’s pussy.” Each new image prompts a similarly obscene thought. When he’s interviewed by a different officer, he recites dialogue about a nostalgia-induced crying spell related to a girl he’s sweet on, originally spoken by a black soldier in Let There Be Light.

For the first 10 minutes or so, The Master doesn’t seem inspired by Let There Be Light so much as it’s a word-by-word remake. Great artists like Anderson often synthesize elements to create something brilliant and new. In this instance, that’s cross-pollinating Let There Be Light with L. Ron Hubbard’s life story. 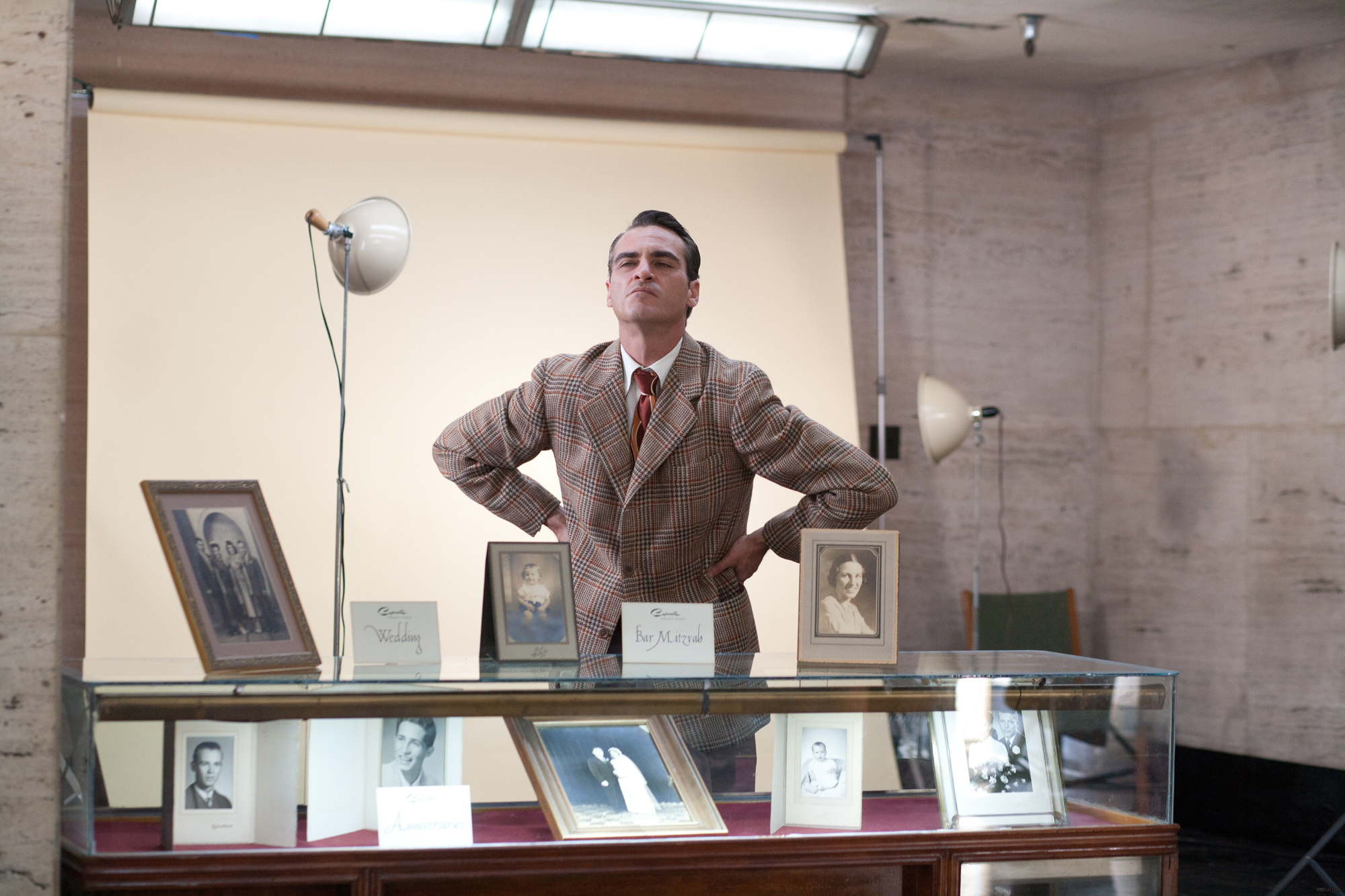 Freddie gets a straight job aestheticizing the polished kitsch of post-war family life as a photographer at a big department store, but he cannot assimilate back into polite society. He’s too filled with violence and rage. Women and booze are not enough for him. Despite “the rejuvenating powers of youth,” there’s something irrevocably broken in Freddie that cannot be cured by conventional means. He might not know it yet, but he’s hungry for meaning, for purpose, for a great cause to rival the war he just helped win. Then he stumbles into something to commit himself to, body and soul. While wandering one night, he comes across a ship so glamorous and gorgeous, it almost seems like a golden mirage beckoning this strange traveler to it.

While Freddie tries to figure out his next step on this ship, Lancaster Dodd (Hoffman) is dancing with a grace that belies his girth. Freddie the interpersonal anarchist thinks nothing of wandering onto the ship without an invitation, or any real reason to be there, beyond a vague hunch that it’s essential to his cloudy destiny. And so he meets Lancaster Dodd, author, renaissance man, and the creator of “The Cause,” the film’s version of Scientology. Lancaster speaks in the precise, writerly sentences of someone who’s sure about his every word, movement, and intention. Where Freddie is a raging id exploding in every direction, Dodd is a sucker for formality. He seems to be speaking to Freddie’s brokenness when he says Freddie has “wandered from the proper path.” From the beginning, the two men are obsessed with each other. To Lancaster, Freddie is an enigma, a perpetually scowling man-child forever on the brink of a violent outburst, someone who uses words to obfuscate, deny, and confuse. With the utmost affection, Lancaster calls Freddie “a scoundrel.” He initiates a father-son dynamic, smilingly suggesting Freddie make some more of the improvised alcoholic drink he made last night, and promising “a full reprieve from your naughtiness as a stowaway if you make us some more.” It’s clear that Lancaster envies Freddie’s freedom, even if it’s a product of having nothing, and consequently having nothing to lose.

Lancaster is a father to all those who follow him, but just as parents often have a soft space in their hearts for their problem children, Lancaster finds Freddie’s misbehavior strangely irresistible. Lancaster shows him another way of life, a world where everything is beautiful, orderly, and comfortable, though more than a little off. Anderson shot the film in 65mm for a kind of epic intimacy, befitting a story simultaneously as big as man’s search for meaning, and as small as the complicated relationship between two troubled men.

The Master wouldn’t succeed if it didn’t revolve around two actors of dissimilar but equal talent. As Freddie, Phoenix is a ragged, raw nerve, a pinballing mess of a man at the mercy of emotions he cannot control and doesn’t understand. Hoffman, meanwhile, gives Lancaster the uncanny self-assurance of a man who must maintain the illusion that he has figured the world out, when the truth is, he’s just as lost as everyone else. Or perhaps he’s more lost, because he has deceived himself into thinking he’s not found just an answer, but the answer to mankind’s suffering. 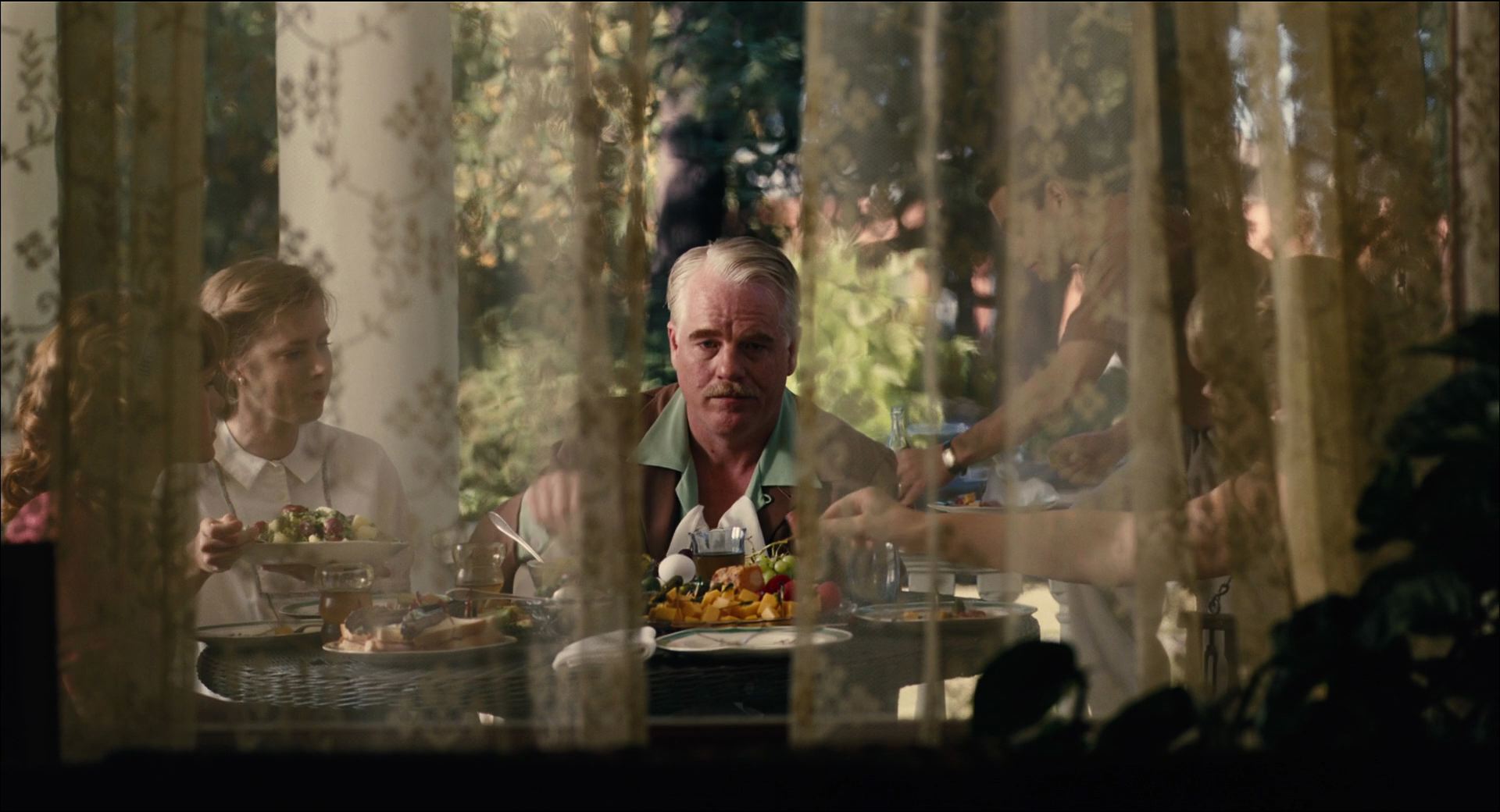 Lancaster strives for complete self-control; Freddie’s facial expression is more likely to contradict his words and wants, rather than conveying them. This is what gives a brutal power to the scene where Lancaster audits Freddie for the first time. At first, Freddie answers with his usual belligerent bullshit. Yet after the session is supposed to be over, Freddie asks for more, and finally responds to Lancaster’s questions with an honesty that is bracing for being so unexpected and out of character. Freddie had been hiding safely within the oddly comforting role of a naughty man-child, but this is the first time he allows Lancaster to see him for the desperate, scared man he truly is. It’s the first time Freddie allows himself the terrifying luxury of honesty and sincerity, qualities he kept at bay because they made him vulnerable.

The Master is intently focused on Lancaster and Freddie, but it’s not quite a two-hander, thanks to the quietly ferocious performance of Amy Adams as Lancaster’s wife. Peggy Dodd sees in her husband’s pet/mascot/alter ego not mere childishness, but something genuinely dangerous and explosive that could destroy their budding religion in its infancy.

At the end of Let There Be Light, the narrator asks rhetorically, “How does a man find happiness?” That’s The Master’s underlying theme, although it broadens its scope to examining how men find meaning and connection as well. As a film made for the U.S. government for the purpose of consoling a public understandably worried about an army of psychologically destroyed men coming home, Let There Be Light is obligated to end on an upbeat note. It’s obligated to end with the suggestion that getting out in the sun, playing baseball, and being part of life’s rich pageant is enough to clear away the trauma of war and provide the foundation for lasting happiness.

The Master is under no such obligations. It’s a work of art rather than a skillful, well-meaning exercise in military propaganda. So it’s honest and bold enough to suggest that for men like Freddie Quell, for whom the war can never be conclusively won because it is fundamentally internal, happiness is an impossible goal he might drive himself mad trying to achieve—and inevitably failing.

The conversation on The Master continues with Keith and Scott’s Forum on the film’s unusual 65mm shoot and presentation, its ambiguity and surreality, and the parallels and attraction between Lancaster and Freddie. And on Thursday, Noel offers up a look at Paul Thomas Anderson’s obsession with father figures.