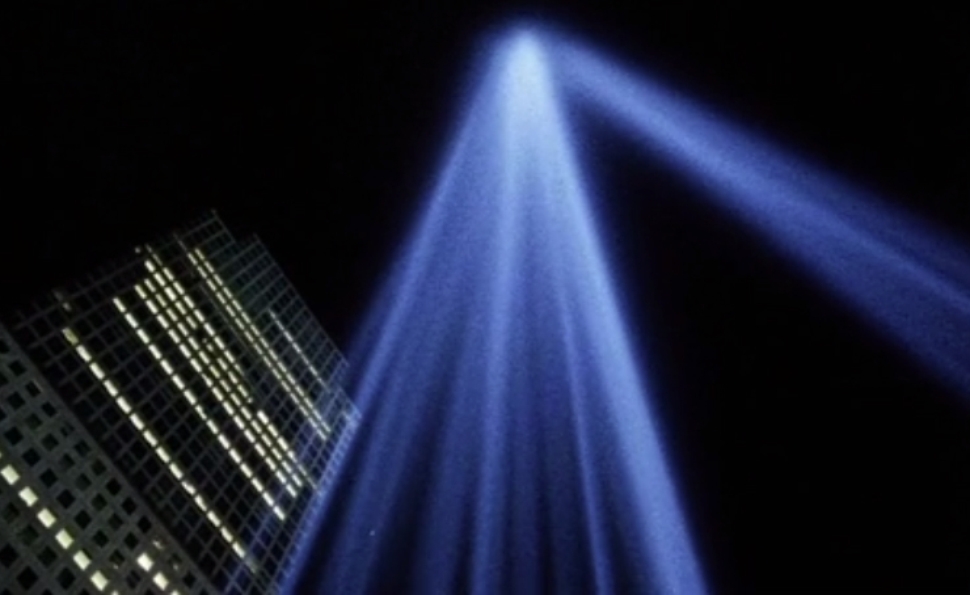 When Kong gazes at Manhattan in the Dino De Laurentiis-produced 1976 remake of King Kong, he latches onto the image of the World Trade Center’s twin towers, illuminated on the evening of his New York rampage by a full moon. He’s drawn to them by forces more powerful than a gorilla’s aversion toward immersion in water. He wants nothing more than to grab Dwan (Jessica Lange), the doomed human object of his desire, and climb them, thanks to their resemblance to a pair of towering rocks on his native Skull Island. They hold a power over him they didn’t have over others most at the time. New, huge, but little-loved, the twin towers impressed New Yorkers with their size—at the time of their completion in 1970 and 1971, they were the tallest buildings in the world—but not their beauty. (If nothing else, they screwed up TV reception.) But their absence from the New York skyline in the years since 9/11, and their replacement by the new, single One World Trade Center, gives the towers a new power when they turn up in old movies. Kong would understand it. “Déjà vu,” Jeff Bridges’ scientist says, drawing on his time on Skull Island as he starts to put together Kong’s plan. “I don’t know where, but I’ve seen this view before.” Kong isn’t the only one who sees the old World Trade Center as a reminder of a place that’s now reachable only in memory.

There’s another reason Kong headed to the World Trade Center. De Laurentiis set out to make a modern take on King Kong—that’s evident in elements from Bridges’ long hair to the film’s cynical take on corporations. Sending the big ape to the Empire State Building would seem like retreading the famous scene from the 1933 version. Instead of that art-deco skyscraper, the ’70s Kong headed for towers made of glass and steel, which presented problems of its own. As James Sanders, author of Celluloid Skyline: New York And The Movies, told The New York Times in 2002, with no footholds, Kong has to “shimmy up” the building. But once on top, the structure of the complex allows for one of the film’s better moments, when Kong leaps from one building to the other, barely making it before pulling himself up from the edge. And once there, he’s on top of the world.

I was 3 when De Laurentiis’ King Kong hit theaters, and its marketing material made a deep impression on me: In the poster, Kong stands astride the twin towers—as he never does in the movie—with all of New York at his feet as he bats at the aircraft trying to take him down. I was a Midwestern kid, and this was one of my first glimpses of New York, a glimpse that broadened when I caught the film itself on cable the following year. Other films changed my idea of New York—from Taxi Driver to Do The Right Thing—but first impressions have a way of sticking. When I finally made it to New York 20 or so years later, I had the good fortune to be shown around the city by a pair of native New York professors I’d befriended. Indulgent of my bumpkinish desires, they knew I’d want to see the view from the top of one of its skyscrapers, and they suggested the World Trade Center, pointing out that the lines were shorter and the view better than at the Empire State Building, but failing to note that the 107th-floor observation deck included a small tribute to the King Kong remake. It was a pleasant reminder that when we got to the top, I’d finally get to see the city as Kong saw it.

De Laurentiis’ King Kong was little-loved, but it gave the World Trade Center one of its few moments in the cinematic spotlight. Here’s another: A few years before Kong, the WTC rooftop served as part of a dizzying musical sequence from the 1973 adaptation of Godspell, one that found its clownish Jesus (played by Victor Garber) and his disciples cavorting dangerously close to the edge of the roof on one of the still-unfinished towers, with no guardrail in sight. A few years later, the plaza between the towers doubled as the Emerald City in The Wiz. In Escape From New York, the towers serve as a convenient landing spot for Snake Plissken to break into a Manhattan remodeled as a maximum-security prison. In the original trailer for Sam Raimi’s Spider-Man, they provide a framework for one of Spidey’s webs.

Most of the time, however, the World Trade Center towers played supporting roles. In the 2011 video “Twin Towers Cameos,” cartoonist Dan Meth edited together a reel of typical World Trade Center appearances, drawing from films from The Hot Rock in 1972—which shows one of the towers still under construction—to Center Stage in 2000. Some use the towers as imposing symbols of New York, but most simply use them as part of the skyline. They’re in the shot because it’s impossible for the shot not to include them. The World Trade Center was there for filmmakers to make of it what they would. But mostly, it was just there.

And then it wasn’t. In the wake of 9/11, it became impossible not to be aware of what was once easy to overlook. The sight of the towers in movies—or on TV, or anywhere else—brought on pangs of anger and nostalgia, never sharper than in the films shot before 9/11, but released afterward. The brief glimpses of the World Trade Center in Glitter (released September 21, 2001) and Don’t Say A Word (released September 28, 2001), and the way those shots of the World Trade Center made the heart leap at the time may be the only reason I remember those movies. (Well, Glitter has other memorable qualities.) I still feel those pangs when encountering movies with the WTC, even if images of that unrecoverable New York don’t jolt the way they used to.

More jolting still were the first films to feature New York without the World Trade Center. Released the same day as Don’t Say A Word, Ben Stiller’s Zoolander arrived with the towers digitally erased from all shots of the New York skyline, the logic being that the sight of it would distract from the comedy. Sitting in a Chicago screening room (at the same screening that produced Roger Ebert’s famously vitriolic, confusingly argued review), I couldn’t get my head around what I was looking at in one scene filmed against the backdrop of Lower Manhattan. Here was New York without the twin towers, by then a familiar sight from the news, but looking peaceful on a sunny day, as if the buildings had never been there. Anyone seeing the movie now, out of context from that moment, wouldn’t give it a second thought. At the time, it looked obscene.

Released the following December, Spike Lee’s 25th Hour never tries to retreat from history. Instead, it keeps finding ways to foreground the aftermath of 9/11, which never plays directly into the plot, but supplies a tone that informs every scene. This begins with the mood-setting opening credits of the altered Manhattan, set to Terence Blanchard’s mournful score. Lee includes one scene in which two friends of the jail-bound protagonist, Frank (Barry Pepper) and Jacob (Philip Seymour Hoffman), look down on the former site of the World Trade Center—by then known as Ground Zero—as a few lonely pieces of construction equipment disassemble what’s left, while some workers rake through the ruins. Lee showed what other films erased. He never looked away from its awfulness, giving the towers the fitting goodbye no other film even attempted.

The World Trade Center has made appearances since then, reconstructed digitally for films set in the period in which it stood. Set to be released this October, Robert Zemeckis’ The Walk, a dramatization of Philippe Petit’s high-wire walk between the towers (already vividly portrayed in the documentary Man On Wire), will be the most dramatic instance of this. Mostly, the WTC has just been in the background. Sometimes, it’s used pointedly, as in Steven Spielberg’s Munich. At other times, it seems to be there to avoid anachronism, as in A Most Violent Year, in which it plays the role it most often played in films of the past: just part of the skyline. But now it’s part of a particular chapter of that skyline. The World Trade Center was supposed to be a permanent fixture. No one builds a skyscraper thinking it won’t last forever. But what was, in the 1970s, a defining symbol of contemporary New York—for giant apes and others—has now become a way to date scenes of the city to the three decades in which the twin towers stood in Manhattan. The moment has passed, but it’s still preserved in images that pull and move in ways no one could have anticipated when making them.

This wraps up our Movie Of The Week look at Spike Lee’s 25th Hour, which began with Scott’s Keynote about the relationship between the wreckage at Ground Zero and the wreckage of the protagonist’s life, and continued with Mike and Tasha’s Forum examining the film’s major themes and symbols. Next week, we kick off a month of movies about misfit buddy teams with the 1955 Martin & Lewis comedy Artists And Models.