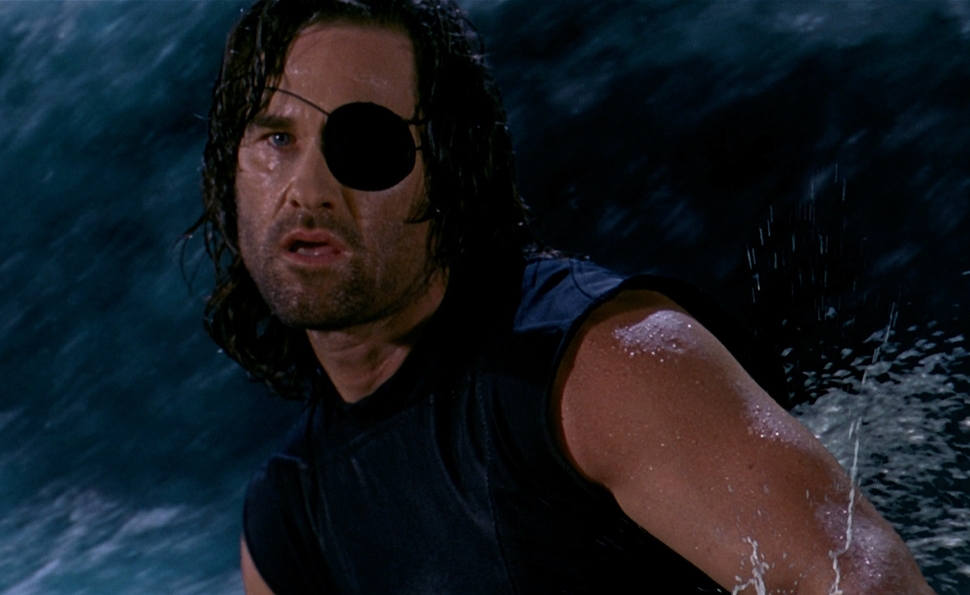 John Carpenter is such an acknowledged master of badass cinema, such a revered and dependable tough guy, it can be easy to forget how goofy many of his films are. It’s likely Halloween will be mentioned first in Carpenter’s obituary when he dies, but some of his best-loved other features are proudly, transparently silly. Dark Star (his first film, co-directed with Dan O’Bannon), Big Trouble In Little China, and They Live revel in their preposterousness. They’re cinematic comic books with an innate sense of their own absurdity.

Carpenter’s non-comedies are littered with moments of levity as well. Escape From New York has its scattered moments of comedy, but it’s as somber as Shoah compared with its poorly received and extremely tardy follow-up, Escape From L.A. Released in summer 1996, the film finds the absurdity of so much of Carpenter’s filmography and brings it to the surface. It’s a giddy, goofy extended lark of a movie that can’t help but make its predecessor look sillier by comparison.

Early in the film, Snake Plissken, Escape From New York’s hero (played again by Kurt Russell), is contacted by an operative for the brutal theocracy that now runs the United States of 2013, a government that’s already deported all atheists, criminals, subversives, drinkers, and ne’er-do-wells to a post-apocalyptic Southern California run by revolutionary Cuervo Jones (Georges Corraface). The operative tells Plissken he looks a bit like an anachronism. He isn’t alone in that respect. Escape From L.A. takes Plissken, an action icon of the early 1980s modeled after Clint Eastwood, the preeminent action icon of the 1960s and 1970s, and sets him against figures modeled on such retro icons as Patty Hearst (A.J. Langer as the president’s daughter-turned-domestic-terrorist), Che Guevara (the inspiration for Cuervo Jones), and Peter Fonda as a Peter Fonda-like surfing hippie dude out for that ultimate wave.

From its exposition-heavy narration onward, Escape From L.A. is unmistakably in on the joke, which lends it a goofy charm, but also can’t help but antagonize true believers in the franchise. Tonally, Escape From L.A. is strikingly different from Escape From New York—think Adam West’s Batman versus Tim Burton or Christopher Nolan’s—but structurally, the films have a lot in common. Both open with Plissken, one of America’s greatest war heroes turned one of its most wanted outlaws, having his punishment commuted into a suicide mission that will win him his freedom if he succeeds, and lead to his instant death if he fails.

The most deadpan of action heroes (he consistently out-deadpans even Eastwood, who has been barely emoting onscreen for 60-some years), Russell plays Plissken as not caring whether his mission succeeds or fails, but figuring the whole saving-the-world bit at least passes the time. Plissken travels into a post-apocalyptic version of Los Angeles where all of the city’s faults and eccentricities have been exaggerated to a comic degree. The traffic jams that have long plagued the city have devolved into a permanent pile-up of rusted-out, ownerless cars. Plissken also encounters a coterie of plastic-surgery-damaged mutants who require new, fresh organs to survive. They’re looked after, in a fashion, by a deranged cosmetic surgeon played by Bruce Campbell, looking more than a little like Rob Lowe’s similarly disturbing-looking cosmetic surgeon in Behind The Candelabra.

Though a cataclysm wiped out the entertainment industry, a vestige of its tacky tourist industry has survived in Maps To The Stars Eddie (Steve Buscemi, looking like an extra from Swingers) who recognizes Snake immediately—he’s quite the celebrity in this world—and offers to be his guide. In one of the film’s slyest gags, Eddie has a guided-tour tape that plays Randy Newman’s “I Love L.A.” In spite of the song’s title, it has a similarly apocalyptic take on Los Angeles as a freakish, empty playground of the debauched and permanently stunted.

Eddie promises to take Snake to Cuervo Jones, who has Che Guevera’s look and revolutionary swagger, but carries himself like a deranged dictator, a Nero of post-apocalyptic Los Angeles. He enjoys having people killed if they fail to make baskets while playing in a basketball court of the damned. In one of the scenes it’s hard to believe made it into an official sequel to Escape From New York, a captive Snake illustrates his surprising gift for playing post-apocalyptic b-ball by hitting some lay-ups, then hurls the ball the full length of the court for a miracle basket that should win him his freedom, but instead just pisses off Cuervo Jones even more.

In moments like this, I chose to give myself over to the film rather than ruing the serious, tough Escape From New York follow-up Carpenter, producer/co-writer Debra Hill, and star/producer/co-writer Kurt Russell had no intention of making. I embraced the silliness of the film both on a macro and on a scene-by-scene basis. Because for those not on board with the gonzo satirical comedy the filmmakers are making, Escape From L.A. could easily be a long, confused slog. So instead of being irritated that at one point Snake goes surfing on a tsunami with king of the post-apocalyptic surfers Peter Fonda, I just enjoyed the ridiculousness of the sequel taking the franchise in such ridiculous, easily mocked directions.

Escape From L.A. doesn’t take anything seriously, particularly its own plot. So while the fate of the world is ostensibly at stake, Snake never seems in danger. He’s indestructible, and doesn’t seem at all beholden to either the Bible-thumpers trying to employ him as a human drone, a remote-controlled badass they can use to further their sinister aims, or the revolutionaries out to take back the United States with the help of foreign countries. Honestly, if Escape From L.A. were any sillier, Snake’s basketball-playing, surfing, and hang-gliding would be interrupted by breakdancing routines. But I enjoyed the movie’s gonzo satire, which makes up in comic invention and memorable supporting characters what it lacks in genuine laughs.

It took a decade and a half for Russell and Carpenter take their beloved cult franchise in a direction seemingly no one other than themselves wanted, into the realm of goofball social satire and science-fiction shenanigans. Audiences rejected their efforts—Escape From New York was a $25 million hit on a $6 million budget, but the sequel was a $25 million flop on a $50 million budget. Still, it’s hard not to admire the audacity of leaping (or hang-gliding, or surfing, given the circumstances) into self-parody with such a glorious absence of self-consciousness.

Here ends our Movie Of The Week discussion of Escape From New York. Don’t miss Keith’s Keynote on the movie’s prophetic elements, such as they are, and Scott and Tasha’s Forum on John Carpenter’s signature elements and Kurt Russell’s faux-badass vulnerability. Tune in next week when we deal with some other exceptionally pained, sad-eyed people in Spike Lee’s 25th Hour.