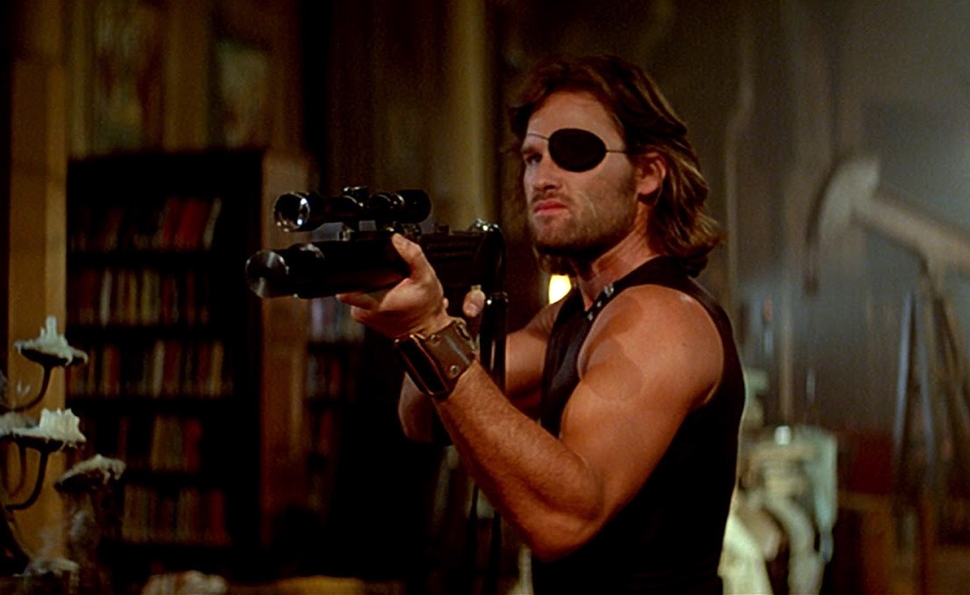 Seldom has a piece of promotional material so captured the essence of a movie while misrepresenting its content as Barry E. Jackson’s poster for Escape From New York. In the foreground, a tough-looking black-clad man wearing an eyepatch helps a bald man carrying a briefcase while firing shots at some shadowy figures to his right. He’s joined in gunplay by a woman in a skimpy dress, but even if they evade the enemies ahead, they’ll still have to reckon with the army of toughs behind, all of them looking like the last people you’d want to meet in a dark alley, as they lift pipes and clubs in the air. (There’s even one poking his head out from a manhole, suggesting that the threat doesn’t only extend past the horizon, but under the surface as well.) And even if the trio makes it, what kind of life will they be returning to? In the background rests the Statue Of Liberty’s head, her hopeful eyes made mournful by the context. Rather than gazing upward, she stares in resignation at the skyscraper-canyon walls of her new home in the middle of a Manhattan street. 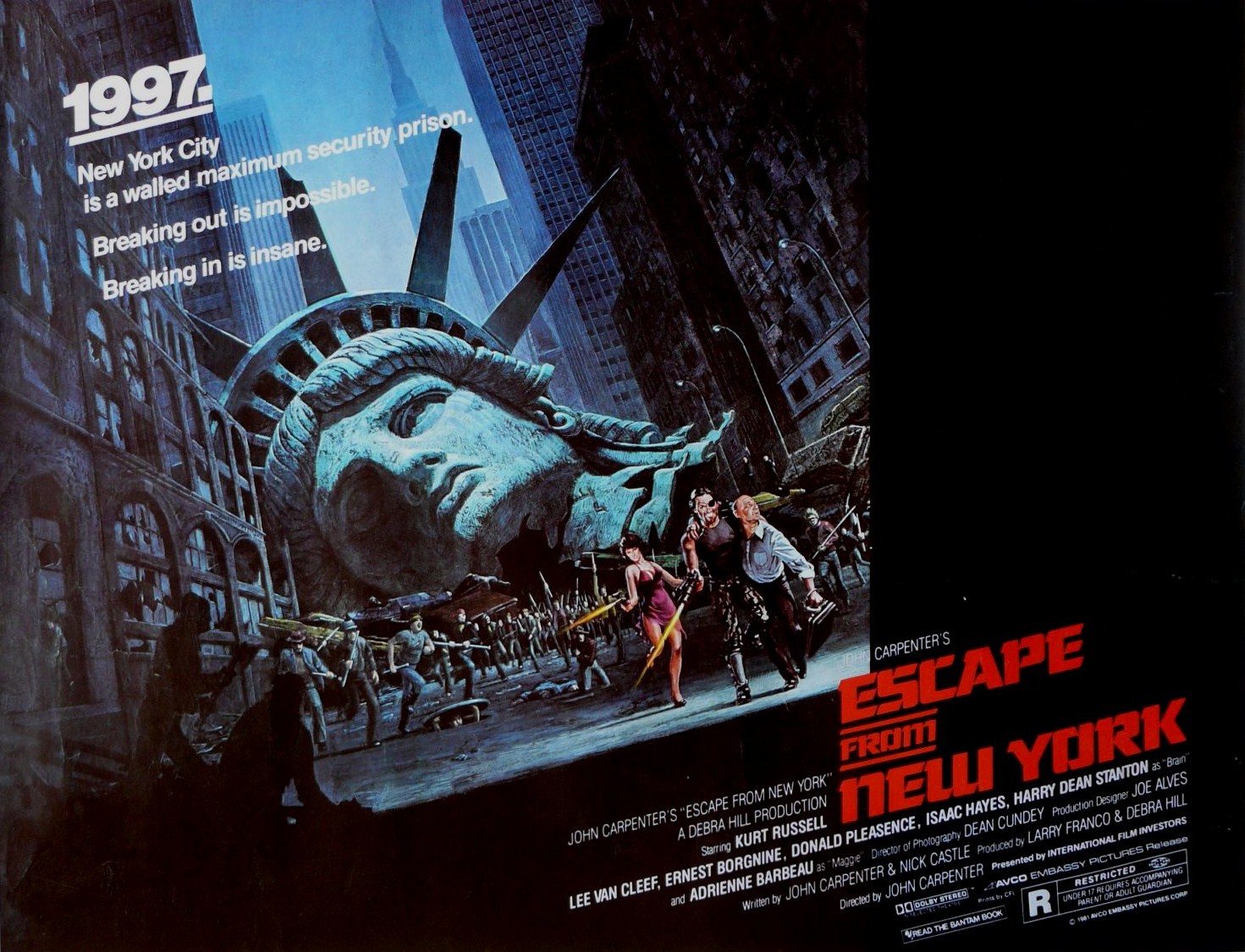 There’s no such image in Escape From New York itself, if for no other reason than John Carpenter’s relatively low-budget 1981 film couldn’t afford the effect. But it’s a brilliant bit of shorthand that establishes the film’s New York as the most dangerous part of a world gone terribly wrong. (The decapitated Statue Of Liberty proved so effective an image that the 2008 horror film Cloverfield borrowed it for one of its most memorable scenes, then had to make the statue’s head bigger, in part to match expectations established by Jackson’s famous but wildly out-of-proportion painting.) Even though the poster promises spectacle the film can’t deliver, it’s impossible to feel cheated by Escape From New York, where post-cataclysmic Manhattan is the sort of place that could feature the head of Lady Liberty in the middle of the street, surrounded by bloodthirsty toughs who take no prisoners.

The tagline completes the picture: “1997. New York City is a walled maximum security prison. Breaking out is impossible. Breaking in is insane.” There’s little of New York itself in the film, though: Carpenter only shot one day of the film in New York itself, and that was on Liberty Island, where he captured a couple of shots beneath a fully intact Statue Of Liberty. But like the rest of the film’s America, Liberty Island has undergone an unpleasant metamorphosis. Redubbed “Liberty Island Security Control,” it’s become the home base of the New York Police Department, whose sole duty is to keep the inhabitants of the country’s only maximum-security facility where they belong. Because nobody wants what’s in there to make its way back to the mainland.

To create his collapsed metropolis, Carpenter worked on Los Angeles soundstages, the Atlanta airport (for a sequence that didn’t make it into the film), and on the streets of East St. Louis, which had fallen on hard times by the early 1980s, with whole blocks that had yet to be rebuilt after a fire. It looks enough like New York to pass, but Escape From New York is less about a possible future for real-world New York than the apotheosis of the dystopian New York of 1970s movies. Born in  New York but raised in Bowling Green, Kentucky, Carpenter relocated to Los Angeles and enrolled in (then later dropped out of) University of Southern California. He came to Escape From New York as an outsider looking in, primarily through movies. Speaking to Starlog at the time of the film’s production, Carpenter pinpointed one film in particular as Escape’s inspiration:

I wrote Escape From New York way back in 1974; I believe I was inspired by the movie Death Wish that was very popular at the time. I didn’t agree with the philosophy of it, taking the law into one’s own hands, but the film came across with the sense of New York as a kind of jungle, and I wanted to make an SF film along those lines.

Unable to make the film right away, Carpenter stashed the idea away for future use, dusting it off and revising it with frequent collaborator Nick Castle after the success of Halloween (with Castle as Michael Myers). In the meantime, the New York Carpenter and others saw onscreen just kept getting grittier and uglier in films like Martin Scorsese’s Taxi Driver, which turned New York into a hell on Earth by filtering it through the perspective of a disturbed cab driver; Walter Hill’s The Warriors, which imagined it as an urban battlefield for warring tribes; and countless films and TV shows from Saturday Night Fever to Driller Killer to Kojak, which emphasized the city’s dinginess and danger.

Escape From New York takes those New Yorks to their logical endpoint, turning the city into a place that’s all dinginess and danger, populated not just with could-be bad guys and might-be criminals, but with convicts deemed too dangerous to live anywhere else. As the film opens, our hero is about to join them, if “hero” is the right word for Snake Plissken. A man of few words and many scowls, Snake begins the film as a convict soon to join the scum of New York. A decorated veteran of a conflict between the U.S. and Russia, he’s since became a career criminal. The film never supplies a reason, but he’s a stronger character as a result. He’s the dark product of dark times, what happens when an American hero stops believing in heroism and America.

Carpenter considered several actors for the role, some of them under studio pressure (Tommy Lee Jones, Death Wish star Charles Bronson), while others (Chuck Norris, Nick Nolte, Jeff Bridges) were offered the role and rejected it. But it’s impossible to imagine anyone but Russell playing the part. At the time still trying to shake off his image as the star of squeaky-clean Disney movies, Russell throws himself into the part with just enough acknowledgement of the absurdity of it all to keep Escape From New York from descending into dourness. One of Russell’s great gifts as an actor—particular in his collaborations with Carpenter—is his ability to put a self-aware spin on macho icons like John Wayne, whom he drew on for his performance in The Thing and spoofed in Big Trouble In Little China, and Elvis, whom he played for Carpenter in the 1979 biopic Elvis, then burlesqued in Demian Lichtenstein’s dreadful 3000 Miles To Graceland. Here, Clint Eastwood, particularly the gravel-voiced, doesn’t-give-a-damn Eastwood of the Man With No Name trilogy, provides the inspiration for his performance. And just as the film did with the dark New Yorks of others movies, Russell takes the implications of Eastwood’s anti-heroes all the way. His cynicism is all-encompassing, his disillusionment total. The world is a mess, so why not get what he can while he can?

Here, that means committing to a potentially deadly bargain: He’ll receive a pardon for his crimes if—and what an if—he can drop into Manhattan and retrieve the kidnapped president of the United States (Donald Pleasence), who needs to share a secret formula for nuclear fusion at a press conference if there’s any hope for the future of life on Earth. The stakes couldn’t be higher, unless Snake were to be forcibly implanted with a device that will kill him if he doesn’t complete his task within 24 hours, which he then is.

Snake goes into the mission with a bad attitude that just gets worse the deeper he gets into his task. In Manhattan, he still finds flickers of humanity, but only flickers, most of them coming from Cabbie (Ernest Borgnine), a cheery taxi driver who seems to come from a different world than the hard cases around him. It’s as if he just stuck around and kept doing his job while New York turned into a prison. But who knows? No one in the movie ever speaks of their past crimes, or what put them in such a dreadful place. It’s as if this is the world they were always meant to live in, regardless of what kind of life they had before.

In a place where ruthlessness and the willingness to kill provide the keys to survival, The Duke (Isaac Hayes) has ascended to the top of the food chain by being more ruthless and more willing to kill than anyone else. (And possibly also thanks to impeccable fashion sense.) Snake’s journey brings him face-to-face with The Duke, and he doesn’t like what he sees. But ultimately, he respects The Duke more than he respects the president, who’s alternately sniveling and bloodthirsty, never fighting back until he can mow down his tormentors with a machine gun from a safe distance. In the film’s remarkable final scene, it’s revealed that Snake’s distaste extends far enough that he destroys the audiotape containing the secrets of nuclear fusion, the world-saving McGuffin he’s struggled to retrieve along with the president, because he doesn’t like the president’s attitude when Snake asks him how he feels about everyone who died in the process of getting him out of New York.

That’s an incredibly selfish act, blowing up the world’s best hope for getting its act together just to make a point about gratitude. But maybe Snake is just saving everyone time. His trip to New York has given him a glimpse of the future, one in which civilization is just a dream we all had for a while. We might as well just get to it.

Carpenter’s films aren’t known for their cheeriness, but a special sort of bleakness hangs over his early 1980s films. He dooms the world twice in a row—here, and in his remake of The Thing—and not for the last time, either. Yet as over-the-top as Escape From New York can be, it has a particularly clingy sort of bleakness. It was ripped off blatantly, in films like 1990: The Bronx Warriors, and subtly, in the many movies that adopted its bombed-out vision of the future—as imagined by production designer Joe Alves and captured in all its rain-slicked glory through the hypnotic imagery of Dean Cundey—as the default post-apocalyptic look. Or even pre-apocalyptic: In the case of movies coming full circle, the urban wasteland of the insane 1985 film Death Wish 3 owes a great deal to Carpenter’s film as its source material. And though Escape From New York is pieced together from other movies, it has a prophetic quality, too. New York cleaned itself up, and 1997 has come and gone. But as a vision of what happens to urban centers when economies falter, civil war breaks out, or order otherwise breaks down, its horrid glamour remains a nightmare waiting to come true.

Over in the Forum, Scott and Tasha continue the conversation with a look at the specifics of Russell’s performance, the film’s politics and style, and that needling, oh-so-John-Carpenter soundtrack. And on Thursday, Nathan wraps up by examining Carpenter’s return to Snake Plissken 15 years later, with Escape From L.A.