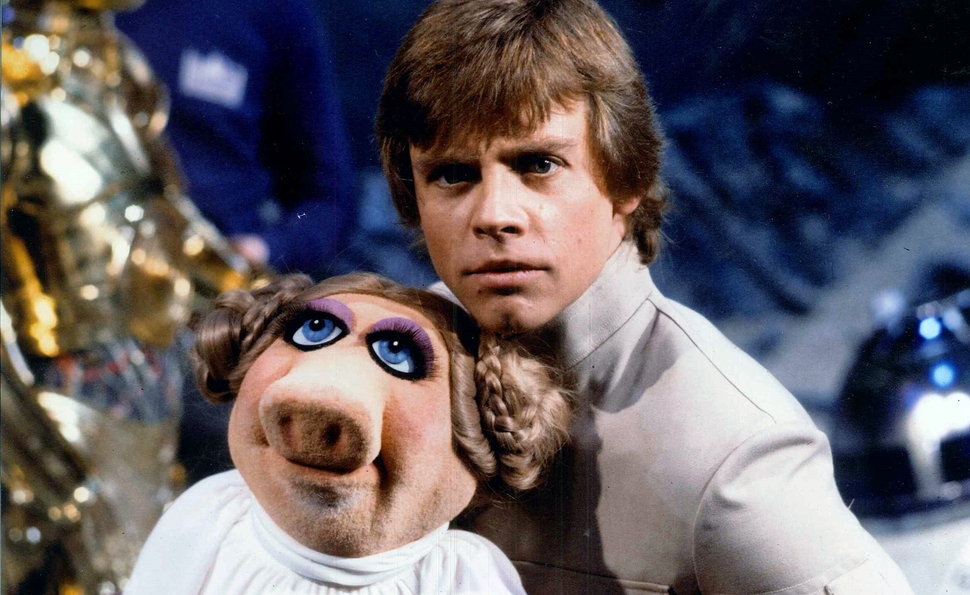 When the Muppets met Star Wars

The Muppet Show looked old and worn. That was the show’s big joke, and its big fantasy. For five seasons, from 1976 to 1981, a parade of major stars gamely guest-hosted a ramshackle television program, surrounded by acts that would’ve washed out in vaudeville, let alone TV. And by the end of each episode, nearly all the visiting celebrities walked away charmed. There was an element of self-deprecation to what puppeteer/producer/visionary Jim Henson was up to with this series, with strong undertones of defiance. As a businessman, Henson was already a success before The Muppet Show debuted; but as an artist, he worried that his work and ideas were dismissed as cute and juvenile. So when Britain’s Associated Television offered Henson his own weekly half-hour program—to be syndicated in the U.S.—he used the opportunity to wink at his own second-class status, while also proving that also-rans could be awesome. During the heyday of TV variety series, Henson dug into the roots of the format, and found shabby old theaters, and entertainers desperate to make audiences happy.

By the time four Star Wars actors guested on The Muppet Show in the middle of the fourth season, a lot had changed for Henson. Both The Muppet Show and The Muppet Movie were hits, and humans across the entertainment industry were clamoring for the chance to appear on any sized screen opposite Kermit, Miss Piggy, and the rest of Henson’s felt menagerie. The Muppet Show’s first season featured a roster of TV variety staples: Harvey Korman, Paul Williams, Ruth Buzzi, Avery Schreiber, and the like. But later seasons saw episodes hosted by hot stars like Elton John, Alice Cooper, Steve Martin, Sylvester Stallone, and Gilda Radner, as well as by venerable entertainers like Bob Hope, George Burns, and Milton Berle. The show developed a point of view that put old-timers and flashes-in-the-pan in the same warm spotlight. To Henson and company, it was all showbiz.

In the two weeks immediately prior to the Star Wars episode, Superman’s Christopher Reeve and Wonder Woman’s Lynda Carter were the featured guests—a mini-wave of geek favorites. The Star Wars stars appeared a few months before the release of The Empire Strikes Back, at a time when the public appetite was high for George Lucas’ galaxy far, far away. For nearly three years, Star Wars had been ubiquitous. It’d been held over for record-breaking engagements in theaters across the country, while its cast popped up on magazine covers and talk shows, and its fans bought merchandise aplenty: toys, bedsheets, tie-in novels, comic books, trading cards, and more. Yet in February 1980, anyone who wanted to see Mark Hamill as Luke Skywalker, Peter Mayhew as Chewbacca, Anthony Daniels as C-3PO, and Kenny Baker as R2-D2 pretty much had two choices: Find a cinema still showing Star Wars, or watch The Muppet Show.

In the episode’s framing device, Luke, C-3PO, and R2-D2 barge into the Muppets’ theater, exciting Kermit, who figures that the show’s audience would rather see Star Wars characters than the original host he had booked: Angus McGonagle, the argyle gargoyle (who gargles Gershwin, gorgeously). Like a lot of Muppet Shows, the Hamill/Mayhew/Daniels/Baker episode doesn’t have a lot for the hosts to do—especially since for most of the show they’re all supposed to be their Star Wars characters, which would’ve made it a little awkward to plop them into songs and sketches. Three of the five onstage numbers in this episode are guest-free. A shepherd and his flock sing a sheep-themed version of “Rama Lama Ding-Dong.” (Get it? Ram-a-lamb-a-ding-dong?) A school of fish deliver a cautionary tale via the song “Three Little Fishies.” And the show’s gung-ho assistant Scooter shows off what he’s learned in his guitar lessons while the spectral images of the Muppets’ house band join his “six-string orchestra.”

While all this is going on, Kermit is managing business backstage as usual, trading wisecracks with the talent as they pass through. (When he asks the “Rama Lama” sheep if they’re all accounted for, one says that they don’t know; they never count themselves because it makes them fall asleep.) In the first half of the episode, backstage is where a lot of the Star Wars action happens, as Luke, C-3PO, and R2-D2 patrol the wings and dressing rooms, noting that they appear to have landed on “some kind of comedy variety-show planet” and that they’re searching for Chewbacca, whom they’ve heard is “being held prisoner by a bunch of weird turkeys.” (“It does rather sound like your show,” C-3PO suggests to Kermit.) Luke is high-strung throughout the mission, shouting, “Remember Alderaan!” as he wields his blaster and kicks down doors. He only calms down when Kermit suggests that he and his robots try going onstage and singing a song. Even then, Luke waves Kermit off and says that the real song-and-dance man in the family is his cousin, Mark Hamill.

The backstage shenanigans finally spill onto the main stage during the Pigs In Space sketch, which Luke and company hijack in their search for Chewie, leading to a format-breaking version of one of the show’s most popular recurring bits. Pigs In Space stretches across a commercial break, and trades its usual gag-a-second style for something halfway between an actual science-fiction adventure story and a Mad magazine Star Wars parody. First, Miss Piggy tries to cozy up to Luke by dressing as Princess Leia—“Go along with this or I’ll cut you in half,” she growls sweetly in his ear—and then the spaceship Swinetrek gets attacked by the real villain behind the Chewbacca kidnapping: Dearth Nader, whose black helmet in profile looks suspiciously like The Great Gonzo.

Pigs In Space ends happily, with the good guys and bad guys alike singing a medley of “You Are My Lucky Star” and “When You Wish Upon A Star.” Then Kermit thanks his guests and cues the closing credits, but not before he finally gets his guests to to dance. C-3PO (or Daniels, more accurately) does a stiff but respectable soft-shoe, while R2-D2 just spins around, and Chewie does an embarrassed little shuffle that vaguely resembles the striptease Gwen Welles’ character is forced into in Robert Altman’s Nashville.

Frankly, this is far from the best Muppet Show—though it’s light-years beyond the godawful 1978 Star Wars Holiday Special. The episode is mainly interesting today for how it fits into the timeline of two cultural phenomena of the 1970s. It arrived just before The Empire Strikes Back solidified the Star Wars franchise’s hold on the popular imagination, and just when The Muppet Show’s “ragtag band of losers” premise was starting to wear a little thin. Given what a huge deal Star Wars was (and is), its characters are a little diminished when they’re goofing around with puppets, no matter how popular Henson’s creations were at the time.

But while “Luke Skywalker” looks a bit out of place, Mark Hamill appears to be having a ball. In his one big showcase number in this episode, Hamill takes the stage alongside Angus McGonagle, gargling along merrily with the ex-host. Hamill also does impressive impressions of Kermit and Fozzie Bear, presaging his post-Star Wars career as a voice-artist for animation.

Hamill was never cut out to be a movie star in the way his co-star Harrison Ford seemed to be, and this episode shows why: At heart, Hamill is too much of a geek and a goofball. While other Muppet Show hosts play-acted that they were disappointed to be stuck on such a low-rent production, Hamill grinned like a loon and flopped his arms around like a human Kermit. Freed from the pressure of helping to carry a blockbuster on his shoulders, Hamill looked like he’d finally found a comfortable home, among the happy misfits who valued enthusiasm more than talent.

The Muppet Show gave a lot of people that feeling back then: That there was at least one place where even the winners could pretend to be losers. Because in the 1970s, it was cooler to be a luckless slob.

This closes out our Movie Of The Week discussion of 1979’s The Muppet Movie. Don’t miss Genevieve’s Keynote on how the movie channels the Jim Henson’s gentle humor and ambition to make millions of people happy. The conversation continues in the Forum, with Noel and Tasha talking about the film’s puppetry ambition and film-within-a-film-within-a-film structure. Tune in next week as we join Kurt Russell in the attempt to Escape From New York.