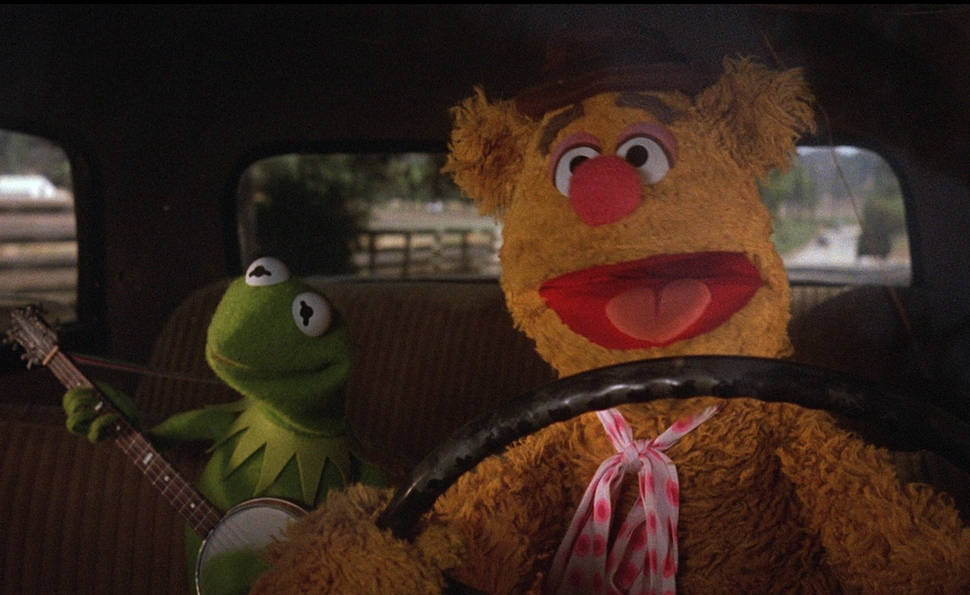 “Perhaps the substance of Jim Henson’s genius was the ability to see wonder far off in crazy directions, and get people to follow him there.” —The Muppets Celebrate Jim Henson

“Take what you got and fly with it!” —Jim Henson, via Kermit, via Robin

After Jim Henson’s death in 1990, CBS aired a special called The Muppets Celebrate Jim Henson, which ends with Henson’s creations learning of his death, reading letters from fans expressing their own grief, and, finally, performing Henson’s favorite song, “Just One Person,” in a reprise of a similar performance by six core Muppet performers at Henson’s funeral. Aside from being weapons-grade sob-fodder, it serves as a handy distillation of the values Henson extolled through his creations and company, and of the legacy he left behind.

This tribute arrived, on a strong current of loss and nostalgia, more than a decade after The Muppet Movie, but it’s easy to trace a straight line from the 1979 film to this segment, the unofficial passing of the torch from Henson to his successors. Both encapsulate, with simple, straightforward sincerity, the core values that made a humble puppeteer into a household name who’s influenced generations.

When Henson began working in Hollywood, there was no such thing as a superstar puppeteer. (There barely is now.) The closest the vocation got to name-recognition was in the realm of ventriloquism. As a young man, Henson only knew that he loved film and television and wanted to be a part of them, somehow; puppetry came later, an unplanned inroad to an industry upon which he would leave an indelible mark. At that point in his life, Henson’s trajectory toward fame was as vague as Kermit’s in The Muppet Movie: Heading to New York with dreams of being a famous puppeteer is only slightly less harebrained than going to Hollywood to become a famous frog. But like Kermit, Henson didn’t just have fame on the brain. He was more concerned with making people happy.

Kermit The Frog was the first Muppet performed and voiced by Henson, though he was beaten to fame by another Henson creation, Rowlf The Dog, who became a regular on The Jimmy Dean Show in the 1960s. But the little green guy is the Henson analogue within the Muppets stable: the dreamer, the leader, that just one person (well, frog) who believes in you. He was the show-runner and emcee on The Muppet Show, the small-screen success that set the stage for the gang’s first film, and he’s the grounding force of the Muppets’ first theatrical feature, on both a narrative and emotional level. 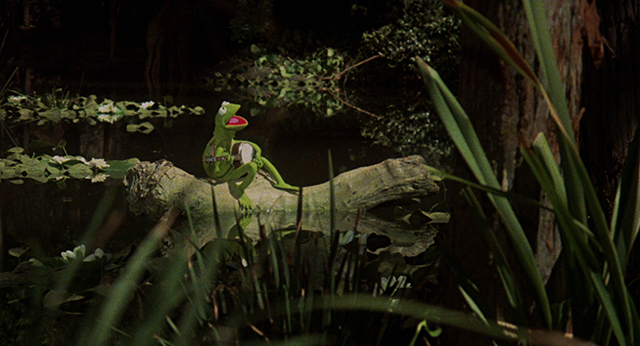 The opening aerial shot and pan-in—well, the second opening shot, after the framing device that sees the Muppets gathering in a theater to watch their movie—positions Kermit as a speck of green, initially barely visible in the vast swamp that surrounds him. He’s presented as a tiny, humble visionary, singing yet another song about rainbows, but with no audience to enjoy it. When a lost Hollywood agent played by Dom DeLuise rows into his path and suggests he head to Hollywood (where they’re holding auditions for frogs, like they do), Kermit is initially uninterested, happy enough in his swamp. Only the agent’s suggestion that his talents could make millions of people happy rouses him, that inspires him to chase a dream, however vaguely formed it may be.

On his way to Hollywood, Kermit brings others into his orbit and inspires them to dream, too. Appropriately, the first companion he meets along the way is Fozzie Bear, voiced by Henson’s closest collaborator, Frank Oz, who also performed Miss Piggy, Animal, and Sam The Eagle, in addition to several Sesame Street characters. Henson and Oz met as teenagers at a puppeteering festival, and for the next three decades, they were one of history’s all-time great comedy duos, via their performances as Rowlf The Dog (whom the two often operated together, as a team), Kermit and Fozzie, Bert and Ernie on Sesame Street, and a host of other memorable Muppet team-ups. (They also co-directed The Dark Crystal in 1982.) Within the Muppets universe, Kermit and Fozzie are similarly close, with very different yet complimentary personalities; where Henson was usually described by his colleagues and admirers as a quiet, thoughtful, but fun-loving man, Oz was more gregarious and animated, and those qualities come through in their performances of their signature characters.

Henson and Oz also shared a love of silly, vaudevillian humor, which permeated the entire Muppet canon, but is especially apparent within the Kermit-Fozzie dynamic. In The Muppet Movie, the two meet for the first time at the seedy bar El Sleazo, where Fozzie is working as a hapless comedian, and Kermit helps him out of a rough performance by joining him onstage to dance to an old-timey piano number (played by the film’s composer, Paul Williams, in a cameo appearance), as the crowd pelts them with refuse. As friendship origin stories go, it’s no meeting at a puppeteer convention, but it’s true to the spirit of Henson and Oz’s partnership: two distinctive yet complementary personalities bonding over a shared desire to perform and entertain. When the two hit the road to make it big in Hollywood, driving Fozzie’s Studebaker (a bear’s natural habitat), they perform one of the film’s standout numbers: “Movin’ Right Along,” a buoyant song about chasing opportunity and seeing the world with a good friend by your side, interspersed with wordplay and visual gags, like the famous “fork in the road” joke. It might as well be Henson and Oz’s theme song.

The Muppet Movie is presented as the origin story of the group of characters that had been performed on The Muppet Show for three seasons already when the movie came out. That means it backward-engineers a lot of that show’s established roles and relationships, like Kermit and Fozzie’s, or later, the romance between Kermit and Miss Piggy. Dr. Teeth And The Electric Mayhem, The Muppet Show’s house band, gets a formal introduction and invitation to join the gang, which they do toward the end of the movie. Even The Great Gonzo’s daredevil aspirations are given an origin story of sorts: Introduced as a humble plumber (who calls himself The Great), Gonzo takes an accidental, euphoric balloon flight, which inspires him to keep chasing the sky, a dream that’s beautifully encapsulated in the lovely, mournful song “I’m Going To Go Back There Someday.” Written by The Muppet Show’s head writers, Jack Burns and Jerry Juhl, The Muppet Movie canonizes a lot of what had formed naturally over the course of three seasons of television, and establishes a reason for all these disparate characters to come together: They simply want to entertain.

One of The Muppet Show’s great meta-jokes is the inchoate nature of Kermit and the gang’s Hollywood aspirations, and their eventual success. From the agent encouraging Kermit to attend an “audition for frogs” to studio executive Lew Lord (played by Orson Welles) offering them, after almost no convincing, “the standard rich-and-famous contract,” there’s a purposeful avoidance of specifics throughout the Muppets’ quest for Hollywood success. Much of that is born of the film’s meta-humor, which takes the “We’re making a movie!” approach to making The Muppet Movie, right down to the references to the film’s script. But it’s also attributable to the collective, generous spirit of Jim Henson and the company he founded.

Often, chasing fame is presented as an individual, selfish act—the sort of thing that might drive Miss Piggy to briefly desert her friends to chase a job offer, before seeing the error of her ways. But Henson’s craft was not that of an individual. Puppetry at the level he and his colleagues were performing is a collaborative act, as is making a movie, particularly one as technically innovative as The Muppet Movie. Just as Kermit brings the Muppets together in The Muppet Movie to create something great—a television show that makes millions of people happy—Henson brought together a team of creative people to establish new forms of entertainment, ones that continue to make millions upon millions of people happy to this day. 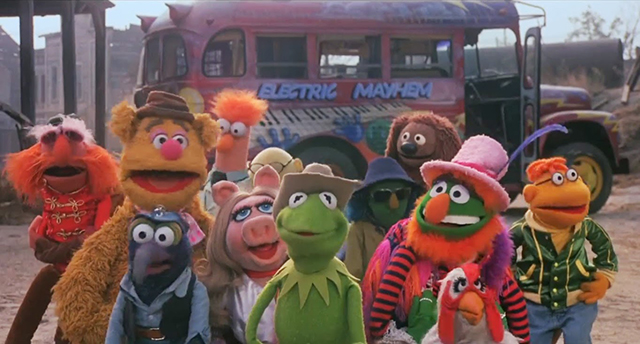 This celebration of a collective working together to create something special is highlighted throughout The Muppet Movie by the presence of mean old Doc Hopper (Charles Durning), the fast-food entrepreneur who wants Kermit to be the spokesman for his burgeoning frog-legs enterprise. Hopper goes so far as to have an evil scientist (played by a gloriously silly Mel Brooks) try to brainwash him into the role. Hopper’s dogged pursuit of Kermit across the country is patently ridiculous, but it also establishes another, less noble road to fame, one Kermit isn’t interested in. It isn’t that Kermit thinks commercials are beneath a frog of his talent—in fact, most of Henson’s creations got their starts in commercials—it’s the mercenary (and fatal-to-frogs) nature of Hopper’s offer that turns him off. The only person who’d be made happy by the arrangement is Hopper, and possibly Kermit himself, though that’s giving ol’ Doc the benefit of the doubt. But as Kermit tells Hopper in their Old West showdown toward the end of the film, “I’ve got a dream, too. It’s about singing and dancing and making people happy. That’s the kind of dream that gets better the more people you share it with.” No matter how much fame or fortune Hopper promises Kermit, it can’t stand up to the collective dream of The Muppets.

Beneath the many sight gags, the wordplay, and the meta-jokes, The Muppet Movie has an undeniably squishy, sentimental center—it begins and ends with a shot of a rainbow, for frog’s sake. The songs, jokes, and visual stunts are there in service of entertaining the audience, which was the prime objective of both the Muppets and their creator. But it’s all rooted in a much deeper, stronger idea that we’re bound to each other by the things we love, and that spreading love and happiness is the best thing a person can do. Jim Henson was a funny, creative man with a well-honed sense of play, but he was also a dreamer, an optimist, and a generous spirit who believed in fundamental decency of human beings (and puppets). Those qualities are what made his creations so enduring and resonant over the years. Through the words and antics of Henson’s wonderful creations, The Muppet Movie tells the story of how just one person can create a whole new world—a world for the lovers, the dreamers, and you.

Tasha and Noel continue the conversation over in the Muppet Movie Forum, which digs into some of the film’s puppeting innovations and the personal investment it expects from audiences. And on Thursday, Noel returns to survey a crossover between empires: The Muppet Show’s Star Wars episode.