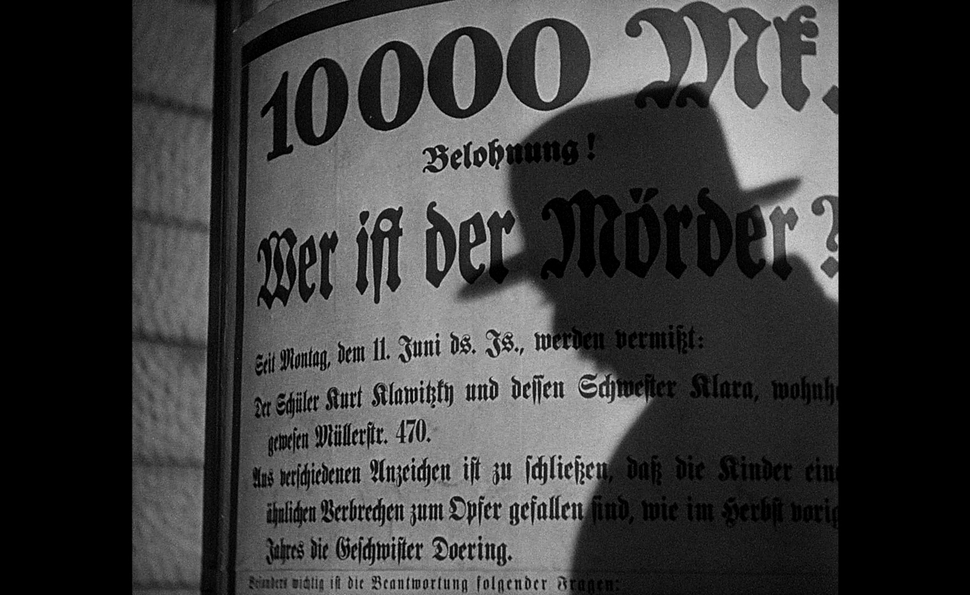 Scott: Conventional wisdom on early sound films is that the recording equipment was so unwieldy that it created a temporary setback for the visual advances that were made in the silent era. And perhaps conventional wisdom holds in most cases, but that certainly isn’t true of Fritz Lang’s M, which doesn’t have a single mundane shot. From the looks of it, Lang was inclined to use sound as sparingly as possible in order to free up the camera as much as he did in his silent classics. That’s plain from the opening shot, an eerily effective overhead of children playing a singsong game that evokes the menace that’s been thinning their numbers for months, and terrorizing parents around the city.

But to give another example of Lang’s mastery, let’s follow the bouncing ball. Having separated from her friends on a busy sidewalk, Elsie Beckmann bounces her ball down happily, stopping to peer up at a sign offering a reward for information leading to the capture of a child murderer. Then the man’s shadow covers the sign. Later, the ball rolls away on its own, and the balloon the killer bought for Elsie wounds up bobbing around the power lines—and that’s all the explanation we need. It isn’t just the economy of Lang’s storytelling that’s impressive here. It’s also the power of his iconography: The ball and the silhouette are more powerful representations of the innocence of youth and the existence of evil than shots of actual people could be. M is a gripping film both dramatically and thematically, but Lang compels with the image first. Keith, what do you make of Lang’s visual strategy here?

Keith: It reminds me of Citizen Kane. Not so much in the particulars as in the way it stays endlessly inventive, but all that invention is in service of the film. That shot of the camera moving through the window is a remarkable bit of “How’d they do that?” staging, but it also almost literally erases the difference between the world outside and the world inside, just as the killer Hans Beckert (Peter Lorre) has brought fear into both public and private spaces. The aerial shots of crime reports nicely capture the cold, analytical way the police approach the matter. And then when Beckert is being hunted like an animal, the way Lang films the sequences makes it impossible not to feel his fear and pity him—a child murderer—if only a little, and only for a passing moment. That’s as good of an encapsulation of the power of filmmaking as any I know.

It’s in keeping with the film’s shifting sympathies, too. M opens and closes with scenes that double as pleas for the safety of children. No one, except maybe Beckert, is going to disagree with that. But between those two scenes, there’s a lot of disagreement about how that safety can be attained, and what form justice should take against those who transgress. I don’t think it arrives at any easy answers, either: The actions of the police and the criminals-turned-vigilantes mirror each other, and while the mob that’s on the verge of tearing Beckert apart is terrifying—and Lang went on to make other films about the horrors of mob justice—it’s hard not to see where they’re coming from. It’s an unsettling film in many ways, not least in its portrayal of how hard it is to enforce law and order.

It’s also a lot funnier than I remember it being. The back and forth between the police is often lively, and there are great touches, like the Beggars’ Guild member who pursues Beckert, but without missing a beat, grabs a discarded cigar with some good puffs still left on it. Or the way Beckert, in addition to being a killer of children, is also a compulsive litterbug. Scott, I think it had been a while since you’ve seen this one. What surprised you most this time around?

Scott: What surprised me was the boldness with which Lang shifts our sympathies toward Beckert—or at a minimum, uses the premise of a child murderer to drive home the evils of mob justice. It’s an audacious challenge he sets for himself: We don’t see little Elsie Beckmann die at Beckert’s hands, but Lang registers the impact of her abduction and death as chillingly as he can. And so that’s in the back of our minds when Beckert appears before an extrajudicial court underground, pleading to be turned over to the police and to have his life spared. The plea is just, in Lang’s eyes: Beckert cannot control his terrible impulses, but like any other citizen, he deserves a more dispassionate form of judgment. (Though I’ll confess some surprise that he’s given defense counsel at all, however ineffectual the man proves to be.)

I disagree with you, though, on the juxtaposition between the official and unofficial investigation. I don’t think Lang places them on equal footing. The only reason the criminal underground wants to hunt the child murderer down is to keep its operations from being raided by the police. They’re not interested in taking a moral stand—they’re killers, too, if not of innocent children. They just want to continue doing business. Though this isn’t necessarily a “he who has not sinned” situation, given the gravity of Beckert’s crimes, they’re in no position to be casting judgment when they’re primarily acting out of self-interest.

But what do you make of Beckert’s defense of his impulses? Is he being completely honest? And what of Lang’s personal history? How does that feed into the narrative of M? 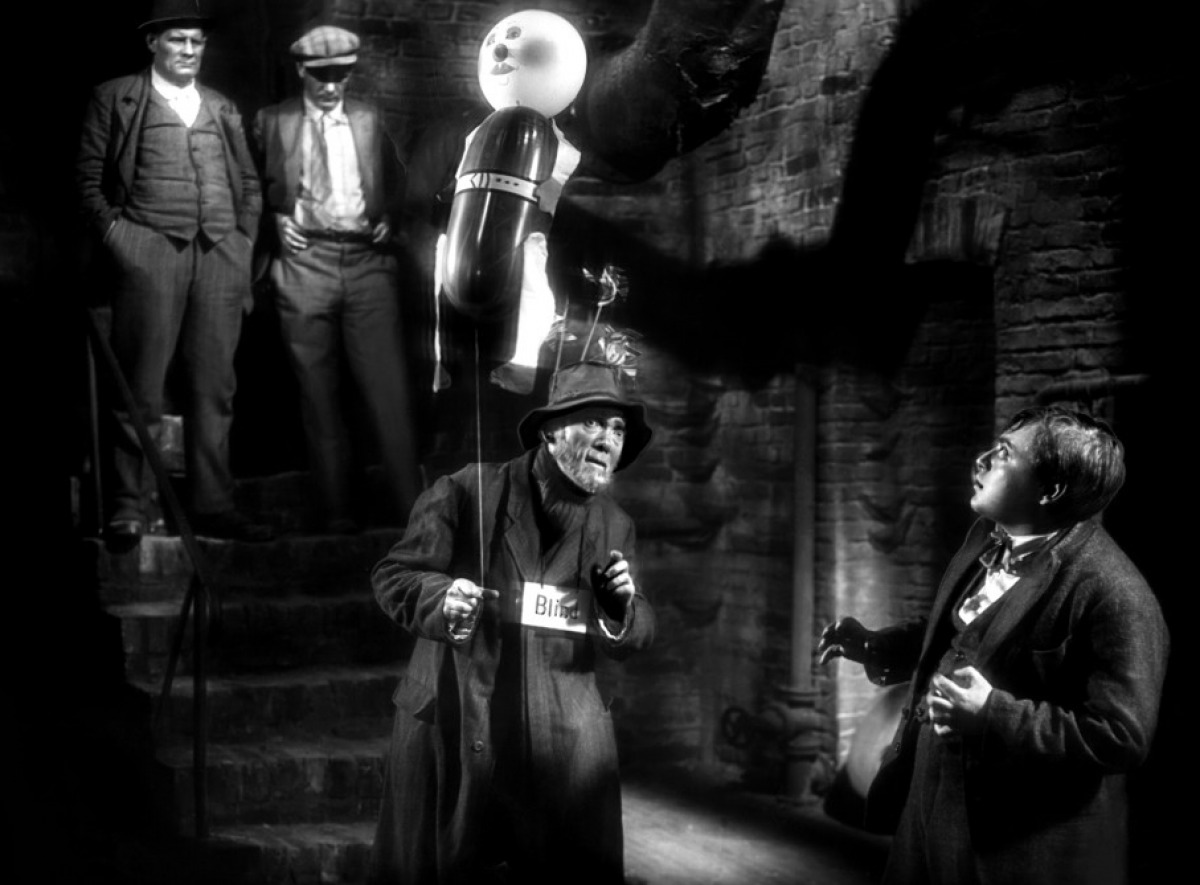 Keith: You could be right about the underworld, Scott. They’re a nasty bunch of customers, and they end up impeding the police investigation. But there are still those insistent parallels. Lang may be presenting the underworld’s efforts as a burlesque of the police’s work, but both parties are filled with colorful characters who aren’t always on the right track. As for Beckert, I think he becomes, perversely enough, the voice of reason at the end. Not that his impulses excuse what he’s done, or should exempt him from punishment, but surely justice has to take some form other than being ripped apart by an angry mob.

The ugliness of that mob is prophetic. Lang, who was Jewish, left Germany a few years after M. He’d already divorced his wife, M screenwriter and novelist Thea von Harbou, with whom he’d had a long creative partnership that included Metropolis. This split seems to have had as much to do with infidelity as politics, but von Harbou soon joined the Nazi-party faithful. So any anti-fascist undertones are surely accidental, but an air of unease pervades M’s Germany, as does a sense that order could fall apart at any moment, and the response might involve the intervention of pitiless men. It’s certainly a product of its time.

Yet it’s also pretty universal, and ahead of its time. Beckert is a psycho, but he isn’t a simple character, and the psychological complexity M brings to that character had a long legacy. It’s also a model procedural, too. I don’t know that it’s 100 percent accurate to how police investigations worked in Weimar Germany, but it seems taken from life, and I’ve come to appreciate the exacting details of the investigation. Any other standout elements for you?

Scott: Glad you’re talking about it as a procedural, because I always leave M wanting to talk about the first and third acts, and sometimes that long middle section gets underserved in the discussion. M is considered, like a lot of Lang’s films (and German expressionist work more generally), to be a precursor to film noir. When people say that, they’re usually referring to the style and its relationship to the darker regions of society and of the soul. But noir often had the nuts-and-bolts of detective plots running through them, and so does M, which not only follows the path to Beckert’s proverbial door, but also follows two paths that diverge in fascinating and telling ways. The authorities and the criminal kind have their own separate methods and their own separate rationales for the way they work a case, and Lang invites us to examine each closely. But bottom line, Lang is pulling off a deft balancing act in cutting from one to the other, and ramping up the tension as he goes.

The standout element for me this time is Lang’s use of on- and offscreen space, and the associations that he invites both visually and aurally. I talked a bit upfront about Elsie and the bouncing ball, and how Lang chillingly suggests her abduction and murder without showing either one happening explicitly. But given that Lang was a newcomer to sound (like everyone else at the time) his decision to have Beckert’s telltale whistling of Edvard Grieg’s “In The Hall Of The Mountain King” give him a presence even when he isn’t in view is remarkably forward-thinking. Sound was a new tool, and Lang was keen on deploying it sparingly, and with as much associative force as possible. What about you, Keith? Anything stick out this time around?

Keith: This is one of those movies whose influence is impossible to overstate, isn’t it? No doubt we would have gotten some form of film noir without it, but it would have looked and sounded different. And Lorre’s performance as Beckert seems just as groundbreaking. There are more horrific villains, but few as tortured.

You know what struck me this time? That massive office building where Beckert hides from the mob. It seems almost intentionally soulless, but it also seems to have the black-magic architecture of a haunted house, with creepy, shadowy spaces and passages that seem to come out of and go nowhere. It’s not the sort of building that would have been possible before the 20th century, but its blunt, practical design still works as a hiding place for monsters.

Over in the Keynote, Tasha talks about M’s odd and striking perspectives, from camera choices to narrative points of view. And on Thursday, Keith returns with a look at Joseph Losey’s 1951 remake of the film.