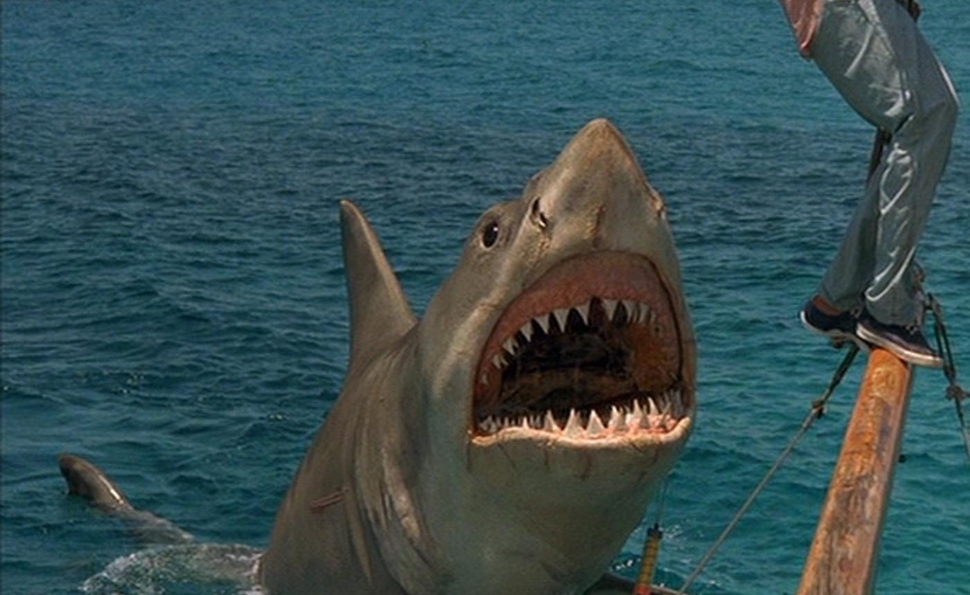 The strange journey from The Taking Of Pelham One Two Three to Jaws: The Revenge

Stop me if you’ve heard this one. In the mid-1970s, a director who paid his dues in television releases a critically and commercially successful thriller starring Robert Shaw—a masterful film that relies just as much on a lived-in sense of place as it does on impeccably constructed suspense sequences.

Jaws, right? I’m talking about Steven Spielberg’s Jaws… Or so you’d think if you weren’t intimately familiar with the rules of clever article lede writing, and hadn’t been paying attention to any of Tuesday’s “Movie Of The Week” articles. You’re savvy enough to ignore my misdirect and know I’m referring to The Taking Of Pelham One Two Three, directed by Joseph Sargent. The man who directed Jaws.

Okay, not really. The man who directed Jaws: The Revenge, a.k.a Jaws IV, a.k.a. the film where ramming into a shark with a sailboat causes the shark to explode, a.k.a. the undisputed nadir for a series that also includes (in Jaws 3D) Louis Gossett Jr. exclaiming the line, “You’re talkin’ about some damn shark’s mother?”

How did the man who directed the wonderful Pelham also manage to helm the disastrous Jaws The Revenge? Perhaps that’s the wrong question. Why do we expect any creative person’s output to always be wonderful, or always be horrible? When do we expect that kind of consistency in day-to-day life?

Michael Caine, who missed his chance to accept the Academy Award for Hannah And Her Sisters because he was in the Caribbean filming Jaws IV, once delivered a famous quote about his Jaws experience—one that encapsulates everything I love about great British actors’ mercenary commitment to take any role someone’s willing to pay them for: “I have never seen it, but by all accounts it is terrible. However, I have seen the house that it built, and it is terrific.”

People have not been lying to him. Jaws: The Revenge is terrible. It opens at Christmastime with Sean Brody, son of the original film’s Chief Brody, having taken his father’s place as an Amity lawman. (Roy Scheider’s character has sensibly died offscreen, of a heart attack). While investigating some driftwood, Sean is attacked by a shark and dies, because sharks bedevil the Brody family like a hereditary disease. Or maybe not. A grief-stricken Ellen Brody insists that this is not merely a shark that has eaten her son, but the shark. The shark from Jaws. The one that exploded into a fine shark-scented mist. He’s looking a lot healthier.

To cheer up the unlucky matriarch, her remaining son, Michael, offers to take her away from frigid, memory-filled Amity down to the Bahamas, where he and fellow marine biologist Mario Van Peebles are tracking the underwater movements of conch. This means the underwater scenes literally carry all the thrill of watching nearly motionless slugs.

The ploy works, and Ellen recovers from the loss of her son in record time, though less because of the beautiful scenery, and more due to her budding romance with Hoagie (played by Caine) a raffish seaplane pilot. Meanwhile, the shark makes the thousand-mile journey from Amity to the Bahamas in approximately a day, because compared to coming back from being exploded, really fast swimming is a piece of Brody-son-flavored cake.

Jaws famously kept the shark out of view for most of the movie, and—while Spielberg admits much of that decision was made for him, due to a constantly malfunctioning mechanical shark—it works like gangbusters, creating suspense out of the unknown. That said, it’s definitely a movie about a shark. Just as in The Itchy And Scratchy Show, when Poochie isn’t onscreen, everyone’s asking, “Where’s Poochie?”, whenever the titular great white isn’t onscreen, everyone’s asking, “Hey, what’s the deal with that killer shark? We should probably do something about him.”

By contrast, Sargent’s Jaws IV keeps the shark offscreen for most of the movie, then spends most of its runtime seemingly forgetting there ever was a shark, preferring to spend its time with such diversions as Ellen Brody’s career in welding dangerously sharp-looking modern-art sculptures, or having its characters taking a side trip to a nightclub to celebrate New Year’s, or watching Hoagie hold hands with Ellen as she swans along various beaches wearing a series of light sweaters. 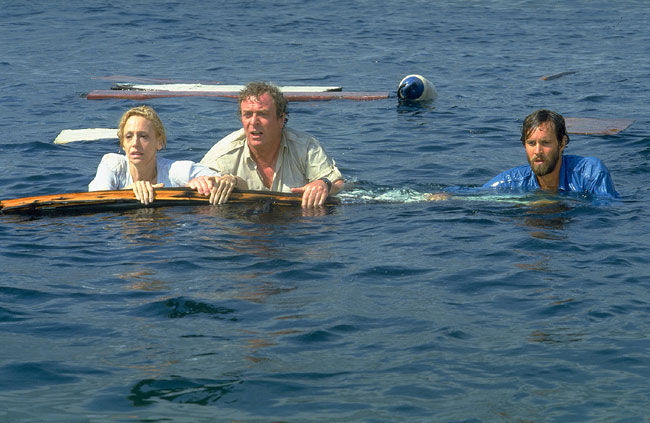 Roger Ebert’s delightful no-star review of Jaws: The Revenge points out many of the film’s hilarious lapses in logic, like Ellen Brody having flashbacks to events she never saw, or her going out on a boat alone to take on her son’s killer, womano-a-sharko, or Hoagie crashing his plane into the ocean, only to climb onto a boat, miraculously dry. He also could not believe “that the director, Joseph Sargent, would film this final climactic scene so incompetently that there is not even an establishing shot, so we have to figure out what happened on the basis of empirical evidence.”

I can tell him what happens in the final scene. Mrs. Brody rams the shark with the bowsprit of the boat, and then the shark explodes. Why does the shark explode? The shark explodes because original test audiences did not like that the bowsprit merely mortally wounded the shark by stabbing it. You know… like a bowsprit. They preferred—nay, demanded!—that this marriage of two non-’splody things (bowsprit and shark) would, through the alchemy of movie-climax magic, blow up real good.

And then Mario Van Peebles shows up alive, even though he was clearly eaten just a few minutes earlier. The end.

The Taking Of Pelham One Two Three isn’t Sargent’s only film of note. While prepping for this article, I had great fun catching up with Colossus: The Forbin Project, which transfers Pelham’s “team of professionals in a control room” procedural elements and low-key intensity to one of the earliest computer-run-amok techno-thrillers. It boils down everything that’s charming about 1970s science fiction, both because of the elements that still work, and because of those that are delightfully dated. (Though it does go off the rails a bit when a computer scientist actually seems to believe a superintelligent computer will both understand and comply with the human desire to have privacy while fornicating.)

Sargent’s bootlegging action film White Lightning also has its proponents. It stars Burt Reynolds back before his charm curdled into not-trying, and there was an edge behind every grin. Ned Beatty seems to have been grown in a lab to play a corrupt Southern sheriff.  The film predates the “Burt and car chases” pleasures of Smokey And The Bandit by four years, and the “moonshine and car chases” hijinks of The Dukes Of Hazzard by six years: It was released in 1973, the same year as Walking Tall, surely making that year zero for hicksploitation.

All of Sargent’s more successful features share a painstaking sense of place, from the grimy New York of Pelham to the retro future of Colossus to the pungent backwoods swamps of White Lightning. Perhaps that’s the problem with Jaws IV. It gets so far into the sleepy Bahamas groove, it almost forgets it’s a movie about a killer shark. Most of the time, it seems to think Michael Caine is starring in a sequel to Blame It On Rio, with a more age-appropriate coupling. Audiences who thought they were seeing a shark-based horror film discovered, to their horror, they were watching a movie about finding late-life romance.

There’s no denying that The Taking Of Pelham One Two Three is an outlier in Sargent’s filmography—perhaps even more so than Jaws: The Revenge. And after his experience with the shark, Sargent—who died last month at age 89—returned to the small screen, rounding out his career making mostly well-received TV movies like Miss Evers’ Boys and Warm Springs.

So is this a story about a journeyman director who was lucky to catch lightning in a bottle once, but didn’t have the talent to repeat the miracle? Or is it the tale of a great talent who was never blessed with the right material again, and spent his later years back on the small screen? Is it both? I come not to bury Joseph Sargent, but to praise him. Whatever turns his career took, he made one perfect movie, and that’s enough.

As for Jaws: The Revenge, it’s also brought many people great joy, as one of the most memorable bad movies of the 1980s. Did it build Joseph Sargent a house? Probably not. But I hope it at least paid off his mortgage.

Dan McCoy is a writer for The Daily Show With Jon Stewart. This concludes our Movie Of The Week look at The Taking Of Pelham One Two Three. Special thanks to our friends at The Flop House Podcast—Dan McCoy, Stuart Wellington, and Elliott Kalan—for taking over the feature this week. Don’t miss Kalan’s Keynote, and the accompanying Forum featuring all three hosts of The Flop House Podcast. And come back next week when the regular Dissolve crew returns to take on Michael Mann’s 1995 crime epic Heat.