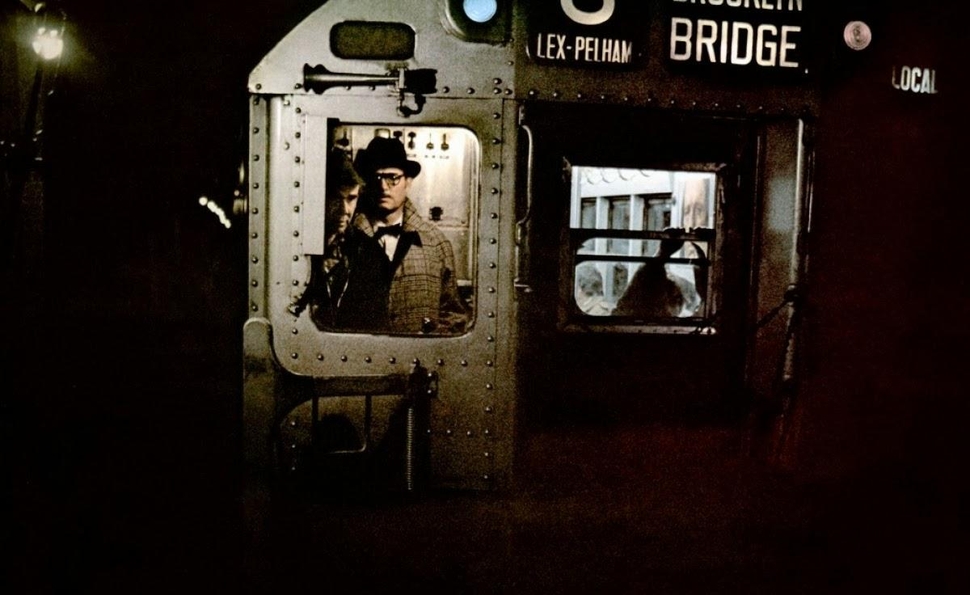 1. “Screw the goddamn passengers! What the hell did they expect for their lousy 35 cents, to live forever?” —subway dispatcher Frank Correll (Dick O’Neill) 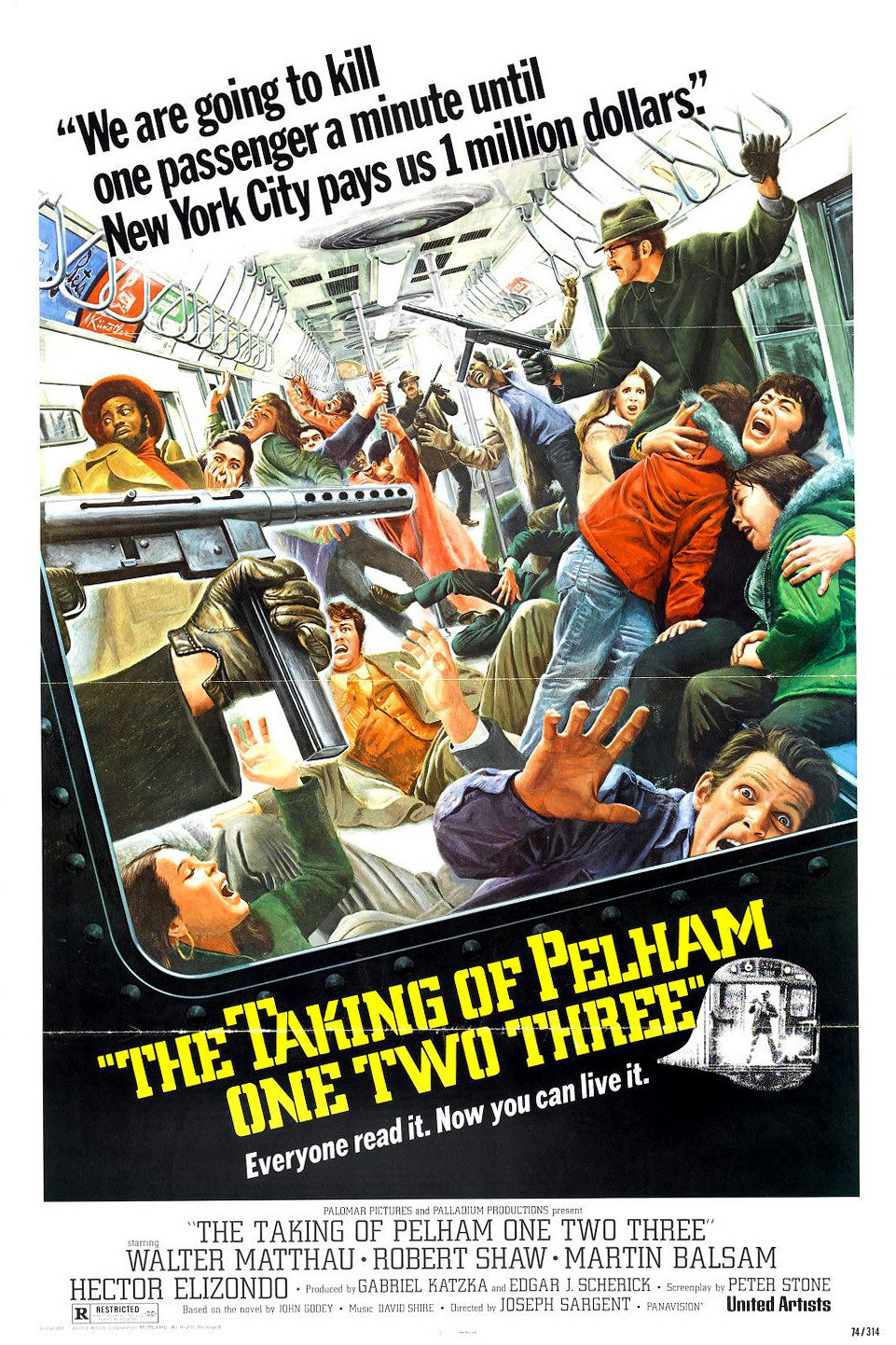 The plot of Joseph Sargent’s 1974 thriller The Taking Of Pelham One Two Three sounds ridiculous: Four mustachioed men hold a broke New York City by the balls by hijacking a subway car. The city’s only defender? A schlubby transit cop making his plan up as he goes along. It’s the stuff of cheap paperbacks, like the one by Morton Freedgood (under the pen name John Godey) that served as source material for the movie. The poster seems like more of the same—pure shock, screaming people in a traincar with a big gun looming in the foreground.

The villain, Robert Shaw, is just a little guy in the background, and the hero, Walter Matthau, isn’t on the poster at all. But look closely: The bit-part character actors playing the hostages have been portrayed faithfully. This silly thriller isn’t really about good guys and bad guys, it’s about a real city and the people trapped in it. And they’re screaming because the city is dying.

The 1970s were a bad time for New York. In 1974, NYC was going bankrupt under the inept Mayor Abe Beame, after sinking under the well-meaning but similarly inept John Lindsay. (Though Lindsay’s creation of the Mayor’s Office of Film, Theater, and Broadcasting made Pelham and all the other classics of the “Grimy New York” genre possible. If anything, his greatest achievement as mayor was letting Hollywood create a record of how badly he was doing as mayor.) It was one year from President Ford telling it to drop dead (though not actually in those words, despite the famous headline), two years from Son Of Sam, three years from the ’77 blackout looting. It was when my mother, fed up with flashers and gropers, stopped riding the subway altogether. But though New York was wasting away, it wasn’t a wasteland. Real people lived their lives in the wake of that death spiral. This is the other story Pelham tells.

“Real” isn’t the usual word for describing a subway-hijacking thriller-comedy, but Pelham soaks in reality and gains power from it. Much of Pelham was shot on location in New York’s tunnels and streets. I recommend visiting the tunnel today in its current role as the New York Transit Museum, but at the time, the film was able to find its soul in the cracked and missing tiles of the 59th Street station, the extra-large box of Bayer antacid on a train dispatcher’s desk, and the antiquated-yet-somehow-still-in-use train-tracking board made out of tiny bulbs like a turn-of-the-century Lite-Brite. The reality starts with Peter Stone’s script, where the first dialogue exchange is an infodump about subway cars and how they work. This is entertainment built on the details of real life, authentic locations and faces giving weight to the banter and heist plotting.

3. “If I’ve got to watch my language just because they let a few broads in, I’m going to quit. How the hell can you run a goddamn railroad without swearing?” —Grand Central subway supervisor Caz Dolowicz (Tom Pedi)

Reality shows up in unexpected places for a Hollywood movie. Which is a nice way of saying the men of Pelham (there are a number of women with speaking roles, but for the most part, this is a movie of men) aren’t the best-looking actors. Which makes sense, because New York doesn’t look its best in Pelham either —it’s all 1970s browns and oranges and sickly yellows, peeling paint and fingerprint-filthy window panes. I like to describe the movie as “unhandsome.” It isn’t just unattractive, it takes something attractive and undoes its charms to reveal the unsightliness underneath. New York is among the most photogenic cities in the world, what with its gleaming towers and all. Pelham turns its back on that. Why open with the classic helicopter shot of a metropolis reaching for the sky, when you can get dowdy Martin Balsam waddle-running into a run-down subway entrance like the White Rabbit gone to seed, and late for his night-janitor job?

There are, by my count, exactly two handsome characters of any real import in the entire film. And I don’t mean Robert Shaw, who spends almost the whole movie hiding his matinee good looks beneath thick glasses, a fake mustache, and a frumpy hat. Some may argue Walter Matthau’s charms, and I’m sure he has loads of that laid-back, Bill Murray charisma, but in the face department, there isn’t a lot there to dream about. I’m talking about Tony Roberts as the Mayor’s aide who really runs the city, and Nathan George as the transit patrolman who sits in the dark watching the hijackers. In most films, these would be our heroes. Here, they’re tangents.

Because Pelham knows a city isn’t made of handsome men. It’s made of harried, out-of-shape, hounddog-faced slobs napping on office benches. It’s guys like Tom Pedi as the overweight, foul-mouthed, belligerent, strangely lovable Caz Dolowicz. They’re unhandsome on the inside, too, these dinosaurs, with their misogyny and casual racism. (Matthau’s offhand slurs as he shows a visiting Japanese subway delegation around is the movie’s one cringe point for me, even though he gets an extremely minor comeuppance.) But as always, there’s a pleasure in a distanced viewing of aging wrecking balls getting things done by pissing everybody off. The secret of Caz Dolowicz’s lovability is that we don’t actually have to deal with him personally.

Pelham embraces unhandsome. Beneath those bustling, vibrant streets are dank tunnels, and inside those gorgeous buildings are rodent-hole apartments where men with greasy hair wear soiled long underwear under ratty bathrobes as they plan crime. Pelham ignores the famous verticality of New York to extoll its horizontal underbelly. Cinematographer Owen Roizman builds the movie around horizontal compositions: tunnels, train cars, gun barrels, rows of desks in low-ceilinged rooms. It’s a horizontal movie to represent a city lying flat on its back. When the city’s famous skyline appears, after 40 minutes of thrilling claustrophobia, it almost feels sarcastic.

4. “We had a bomb scare in the Bronx yesterday, but it turned out to be a cantaloupe.” — NYPD’s Lt. Rico Patrone (Jerry Stiller)

I’ve been making Pelham sound grim, when it’s actually a really, really funny movie, with all the wit expected from a script by the man who wrote Charade and 1776. At times, it’s like an animated political cartoon (although one of the rare political cartoons that’s actually funny), with the hostages not even getting names, just labels: The Old Man, The Hooker, The Mother, The Spanish Lady, The Homosexual. What else would you call the scene where the whiny, ineffectual, flu-stricken mayor assembles the city’s leaders—including Rudy Bond as a cigar-chomping, J.Jonah Jameson-looking police commissioner who wouldn’t be out of place in a Muppet movie—and the decision is made to pay the ransom because it’ll mean 18 guaranteed votes? (Lee Wallace as the mayor comes across as a fantastically savage takedown of Ed Koch, except that Koch wasn’t even elected mayor until 1978.)

But the characters are more than political cartoon archetypes, and the jokes are more than satirical zings. There’s the Matthau Factor: people just doing things in a funny way. Matthau exemplifies this lived-in humor when tossing in “mishegoss” as one of the crimes the transit police deal with, or ending the movie with a facial expression I can not describe in words, but that’s funny in a New York, ball-busting, cynical, “Are you kidding me?” sort of way. The way the subway riders laugh when a gunman tells them they’re now hostages. Because sure, it’s scary, but come on, seriously?

Most of the movie’s humor comes from the same thing that ratchets up the movie’s tension: the thrilling hostility constantly wielded by every New Yorker against every other New Yorker. New York State’s motto is “Excelsior,” but New York City’s has always been “Fuck me? Fuck you!” No situation is complete without kibbitzing or argument, and everyone has to put their two cents in. Even the bystanders who are onscreen for mere moments. Even the hostages in danger, who can’t help telling their captors that the million-dollar ransom is “not so terrific.”

It’s an attitude that hits with the opening notes of David Shire’s score, a rolling atonal jazz-funk cacophany that can legitimately be called brassy because there’s a hell of a lot of brass in it. It’s a warning that this city is an irritable, stressed-out motherfucker, and you better watch yourself. This is a city that enjoys being obnoxious, like the cop recklessly racing downtown with the ransom money exulting, “I’ve always wanted to do this. We’re scaring the shit out of everyone!” And the swearing. My word, the swearing. The sheer amount of curse words in a 40-year-old mainstream movie shocks and thrills me every time I see it. The first F-bomb (“One Two Three, where the fuck are you?”) gets dropped so casually, and then the curse words just keeps coming like a heavy rain. It’s a beautiful thing.

6. “Listen, fella, after this is over, you should seek out psychiatric help.” —transit cop Lt. Zachary Garber (Walter Matthau)

Hostility is key in both Pelham and New York, because it’s a valuable ingredient for the interaction that makes a city and a film. And specifically for a city, interaction between strangers. Pelham is a movie about people who would otherwise never meet (like New Yawk native Garber and English-accented mercenary Mr. Blue) being thrown together in unpleasant circumstances, affecting each other’s lives without actually becoming part of each other’s lives. In other words, Pelham is about living in a city.

As urban theorist Jane Jacobs said, a city can’t live without the frisson that comes from people of different lifestyles and backgrounds sharing the same space. The hijackers, for example: an English soldier of fortune, a mafia hitman, a former train conductor, and a stutterer. No reason to come together except for this one job, and it’s clear they don’t like each other. They’re a miniature community unto themselves, irritable, violent, unpleasant people briefly seeing each other’s faces before parting, like riders sharing a subway car. They’re strangers who hate that they need each other. They’re New York in the 1970s. They’re New York today.

Elliott Kalan is the head writer of The Daily Show With Jon Stewart and the writer of Marvel’s Spider-Man And The X-Men. The Taking Of Pelham One Two Three discussion continues in the Forum, where Kalan and his Flop House co-hosts Dan McCoy and Stuart Wellington join The Dissolve for a discussion of the film. Then come back Thursday to read McCoy on another notable film from Pelham director Joseph Sargent: the infamous Jaws: The Revenge.