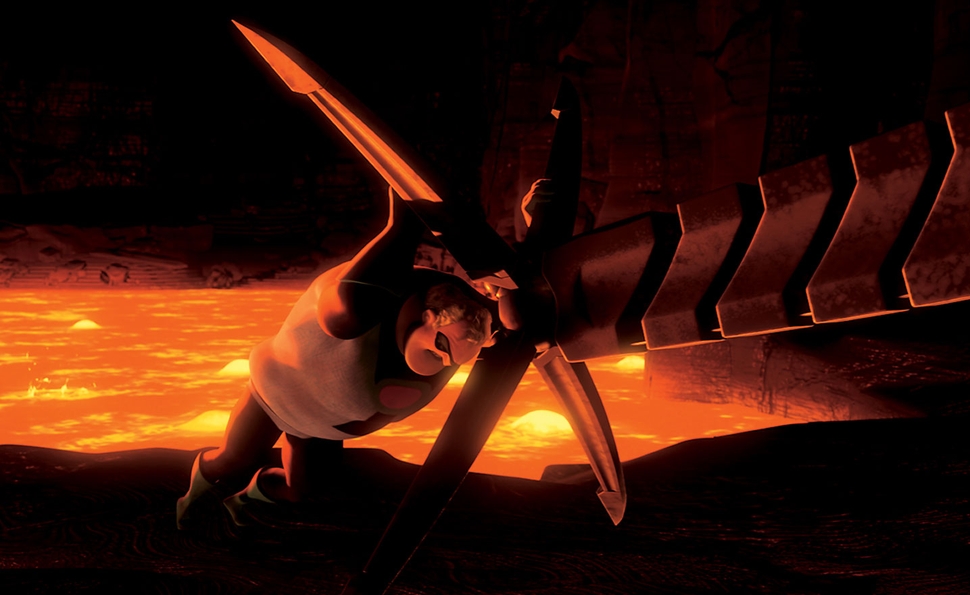 The slippery politics of The Incredibles and other superheroes

In a New York Times review of The Incredibles, A.O. Scott made a curious observation: “[the film] suggests a thorough, feverish immersion in both the history of American comic books and the philosophy of Ayn Rand.” He wasn’t alone in this belief. When The Incredibles came out 10 years ago, it launched endless online conversations about an underlying Objectivist bent. The Christian Science Monitor ran a piece about children’s films insidiously laced with political commentary. The Guardian published an article beginning with Rand and branching off into an assortment of other critical readings of The Incredibles at the time of its release. Cosmo Landeson of The Sunday Times posited that the film “is the story of how the egalitarian drive in modern America killed off the superhero. It’s a passionate and politically incorrect plea for truth, justice and the Nietzschean way.” By the time the scholarly tome Contemporary Dystopian Fiction for Young Adults: Brave New Teenagers invoked Rand’s name when working through The Incredibles, this reading was pretty thoroughly enmeshed in the public’s understanding.

It isn’t difficult to see where they were coming from. Brad Bird’s giddy valentine to the caped crusaders of yore does appear to lament regular folks’ tendency to impede awesome people from being awesome. Bird’s vision of an ungrateful public barring its deific protectors from exercising their God-given talents sounds like something ripped out of Atlas Shrugged. There’s also Bob Parr’s breadbox-sized boss, Gilbert Huph, whose greed and inflated sense of importance prevent Bob from quashing a nearby mugging. (If Bird’s estimation of Huph wasn’t clear enough, the twerp gets thrown through several walls mere seconds later.) Edna Mode’s zero-tolerance policy for emotional weakness fits the theory; a woman who consoles a teary-eyed Helen Parr by commanding, “Pull yourself together!” and “Go, confront the problem! Fight! Win!” most likely has a copy of The Fountainhead lying around somewhere.

And two specific moments from the film transparently suggest an ideological subtext: Early on, a frustrated Bob voices his disapproval of his son’s graduation ceremony to his wife Helen. Echoing the sentiments of so many parents with less-than-fond memories of ass-numbing afternoons spent watching moppets receiving certificates, he yells, “It’s psychotic! People keep coming up with new ways to celebrate mediocrity, but if someone is genuinely exceptional…” Tellingly, the fight revolves around the question of whether their super-speedy son Dash can go out for extracurricular sports without attracting unwanted attention. The second thematically loaded statement comes from baddie Syndrome. Unveiling his plan to mass-produce weaponry that replicates the crime-fighters’ precious superpowers, he lays out the big picture: “When everyone’s super, no one will be.” It’s a pretty damning quote, in clear condemnation of the participation-trophy culture that’s grown dominant in recent generations. (With characteristic delicacy, comedian Adam Carolla described it as “the pussification of America” in his less-than-essential book In Fifty Years We’ll All Be Chicks.)

Except that Brad Bird isn’t an Objectivist. He’s an avowed centrist, stating in multiple interviews that any Rand-sympathizing ideology in the film was completely incidental. In talking to IGN’s Andy Patrizio, Bird put it in no uncertain terms: “I think [the film] got misinterpreted a few times. Some people said it was Ayn Rand or something like that, which is ridiculous. Other people threw Nietzsche around, which I also find ridiculous.” In an interview with animation historian Michael Barrier, Bird said, “Sometimes I feel like people got silly with their analysis of [the film], the Ayn Rand nonsense for example, but the mere fact that a mainstream animated film was being thought of as provocative at all, I took as a tremendous win.” Bird isn’t against viewers taking liberties while processing his work, but he didn’t consciously espouse the Randian philosophy. Whether Bird has the right to determine how people interpret his film is a separate can of worms, but he clearly feels the public projected a politicized reading onto a film that’s as much, if not more, about the fear and frustration that comes with aging out of youth’s promise.

This kind of projection doesn’t end with The Incredibles. Superhero films have long made juicy targets for people looking to inscribe political allegory to pop entertainment. Christopher Nolan’s The Dark Knight dominated the cultural dialogue during summer 2008, and a rapt public scrutinized the film from every imaginable angle—including a New York Times editorial suggesting the film is a lofty commentary on America’s Middle East policy. Critics pondered Batman as a Bush-modeled figure, and weighed issues of liberty exchanged for safety during times of geopolitical chaos. But screenwriter David Goyer explained that he had encoded escalation as the film’s guiding theme, and proud Englishman Nolan said he didn’t have much interest in Yankee politics. Similarly, the Xandaran-Kree blood feud that drove this summer’s beloved Guardians Of The Galaxy inspired a handful of critical comparisons to Israel-Palestine tensions, once we all stopped doing the Groot dance.

There’s no single magical rationale that makes superhero films such fertile breeding grounds for politicized thinking and globally minded readings. For one thing, such interpretations come easy. By their nature, superhero movies necessitate broad-strokes conflict on a scale that encompasses the entire planet, if not the fringes of the known universe. Manichean notions of good and evil designate heroes and villains in bold font, and such clearly delineated moral judgements lend themselves to allegory. The Incredibles won many of its plaudits on the virtue of its nuanced take on superheroism, but it leaves its central conflict nice and simple: the bad guy, jealous of the intrinsically superior good guys, wants to take away what makes them special by turning it into the standard. The Joker gets off on arbitrary acts of chaotic violence, and Batman must gauge exactly how deep he’s willing to sink to restore justice. Guardians’ warring parties have been locked in rage-fueled combat for centuries, with every new generation inheriting a volatile powder keg. Regular folks don’t often grapple with life-and-death power dynamics, but philosophy and politics regularly traffic in such universal situations.

Beyond that, superhero films have grown popular enough that they attract appraisals through every imaginable lens. The rabid, obsessive fandoms that flourished following the advent of the Internet will pick through a movie with 30 fine-toothed combs, meticulously constructing readings along gendered, racial, and class-based lines—and those only constitute the tip of the analytical iceberg. The more attention paid to a film, the more intensive the public’s scrutiny. With so many critical apparatuses to choose from, the political becomes inevitable. The Incredibles offers up a roundly solid foundation for an Objectivist reading to hold water—the subtext comes right from the villainous, cape-clad horse’s mouth, qualifying it as text—but determined viewers have no trouble sniffing out ideological propaganda in less self-evident entertainments.

The factors compelling audiences to create unintended meaning in superhero movies vary, but a shared root cause unites them. Discerning what a film is “really about” gives analysts a comfortable feeling of simplicity and exactitude. Articles like Cracked’s list of “Mind-Blowing Hidden Meanings” approach films as questions that each have a single, fully formed answer. It fosters the mistaken idea that watching a movie is a matter of “figuring it out,” of seeing past the smoke and mirrors to art’s clear-cut intentions. When a film conceals its underlying significance like a riddle, it can be safely filed away once it’s solved. Viewers have successfully triumphed over the film’s trickery, and can walk away with the warm feeling of being smart enough to “get it.”

The danger is clear and present: Politicized “decodings” of pop culture don’t leave enough room for diversity of opinion. When a viewer does a bit of research after watching The Incredibles and lands on the Objectivist theory, that squeezes out half a dozen other critiques. The film’s deliberate characterization of the faceless thugs as real, remorseless killers frames it as a loving deconstruction of the big-budget superhero movies it emulates. As moral content goes, no self-respecting children’s film would claim “mediocrity is evil” as its guiding theme. Brad’s final act underlines a message that life’s gravest danger is not being true to yourself. When the Parr family lets the realities of everyday life (office drudgery, childcare, high school) overshadow the exuberant, joyful parts of their identities, they live in existential agony. Returning to superheroics is a reclamation of the familial mojo; Dash ends up going for the track team, coming in second, and loving it. That’s why they’re called “readings” instead of “solutions.” Art will never hand down rulings on who is right or wrong. All active viewers can do is formulate an opinion and supply evidence that supports it.

So the answer to the million-dollar question “Is The Incredibles an Objectivist film?” is a resounding “maybe.” Viewers are free to cook up whatever interpretations they like, which can be a wonderful thing. Room 237 illustrated the way a wealth of views on a film can invigorate the text and the people debating it. In any case, the text remains a thing of beauty to be looked upon and argued about. Appreciation of art lies in dialogue and dissent, not in wrestling entertainment into submission. When everyone’s assured of their own viewpoint, no one will be, and isn’t that just incredible?

This ends our Movie Of The Week discussion of Brad Bird’s The Incredibles. We opened on Tuesday with our Keynote essay looking into the Pixar touch and how it gives The Incredibles plenty of goals and plenty of tones. The Forum continued the conversation by considering the film’s superhero influences, Art Deco cool, and combination of action and emotion. Next week, Animation Month continues by jumping from The Incredibles’ retro-future back to Pinocchio’s quaint past: both its history as Walt Disney’s landmark second animated feature, and its evoking of an even older fantasy era.