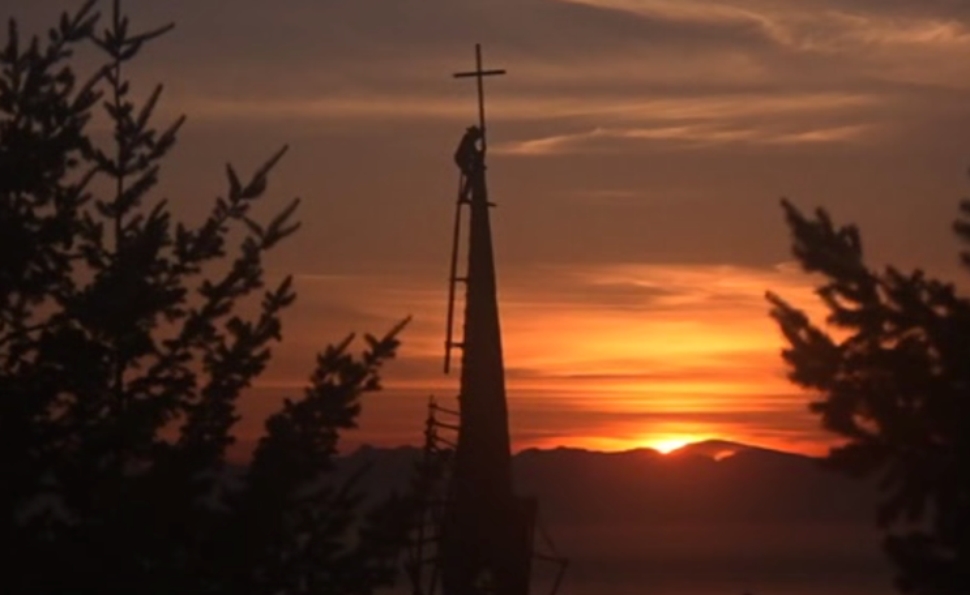 Scott: McCabe & Mrs. Miller comments so brilliantly about so many things—about the Western and the Old West as it really was, about America and capitalism, about community, about violence. But for me, the best place to start with any Robert Altman film is the milieu. Altman made such a range of projects in different genres and different periods that I’ve always felt the common denominator, beyond the uniqueness of his overlapping dialogue and semi-improvisatory style, is the importance he put on setting. His films were always intent on establishing and understanding a specific time and place first, and letting the other elements flow naturally from that. What strikes me immediately about McCabe is the vivid, almost tactile grime of Presbyterian Church, a town so ramshackle and impermanent that its name derives from the only structure that appears foundationally sound. (No one actually seems to go to church, and it nearly burns to the ground in the end; Altman drives home those ironies subtly.) The road leading into town is crudely carved and pockmarked with muddy divots, the homes and storefronts are arranged without an overall sense of city planning, and the main business is a cramped, dark saloon where miners gather to drink and talk about beard maintenance.

For Warren Beatty’s McCabe, this is a clear business opportunity. The men want a better saloon, and cut-rate whores. That’s what civilization is all about, bringing order to disorder, and perhaps turning a profit in the meantime. What struck me about McCabe & Mrs. Miller this time around is that McCabe isn’t any less guilty of wanting to strong-arm his way into Presbyterian Church than the monied, big-business goons who eventually have him killed; his tactics are just a different, more palatable form of capitalist aggression. And they’re still pretty crude: It takes Julie Christie’s Mrs. Miller to civilize him a little on how to move his business forward more thoughtfully.

Keith: And what does that get him? For all its beauty, McCabe & Mrs. Miller is a pretty brutal movie that ends badly for both halves of its title: McCabe ends up buried under snow (as symbolic a fate as he could meet) and Mrs. Miller gets lost in an opium haze. It’s ultimately a pessimistic film about the fragility of beauty, love, civilization and, well, everything. For all Altman’s subversion of film genres—here and elsewhere—it fits perfectly into the subgenre of Westerns dealing with the closing of the West. Civilization arrives, and with it, some of the comforts of the modern era. But those comforts also close down possibilities and restrict freedoms. Presbyterian Church’s pious name belies its openness. You can get away with a lot in a town like that, including being a pimp. And if you’re a kind enough pimp, you can even be accepted into the town itself. But once the forces of business and propriety start creeping in, there’s just no place for a man like McCabe.

Scott: There’s a silver lining here, though, however thin. Recall that the climactic scene cuts back and forth between McCabe’s fatal showdown against the armed goons, and the fire that engulfs the church. While you’re right to assert that the film’s view of civilization—or specifically, the insidious, powerful forces that shape it—is pessimistic, the ending does include a touching affirmation of community. Putting out the fire is an enormous group undertaking—it’s perched on a hillside, and the wood structure is like a tinderbox—but with everyone working together, they save the church and celebrate their collective accomplishment. Altman may feel sour about institutions, but he loves people, and you can see that shine through even in this very dark, sad ending.

And how about that ending? There’s a lot of talk about Altman’s use of Leonard Cohen songs in McCabe—some people don’t like them, which is beyond my comprehension—but he goes with a startlingly minimal sound mix in the climactic scene. The only things we hear are natural sounds—a lot of McCabe clambering across wood floors, startling bursts of gunfire, and the winter wind howling through the trees. The whispers are eerie, the bangs deafening.

Keith: But let’s double back: Some people don’t like the way he uses Leonard Cohen songs in this film? Because that is crazy talk. Not too many films use the one-artist-for-the-whole-soundtrack approach—Harold And Maude comes to mind first—because that means living in the tone set by that artist for the entire film. But Cohen is perfect here: yearning, fatalistic, weary, but never quite defeated.

One thing we haven’t touched on yet is how well Altman’s loose approach serves the cast. Beatty and Christie give some of the best performances of their careers, but we also get to see Altman regulars like Keith Carradine, Shelley Duvall, Rene Auberjonois, Bert Remsen, and Michael Murphy. If any career ever made a case for the value of stock companies, it’s Altman’s. And McCabe shows off the Altman players to full advantage.

Scott: The film is unimaginable to me without the Cohen songs, which function as these mournful interstitials that unify the entire movie. What a charitable way to describe McCabe, as “just some Joseph looking for a manger,” or to understand his ambition as “watching for a card so high and wild, he’ll never have to deal another.” Through Cohen’s lyrics—not too direct, not too oblique—we understand McCabe as a man who wants to build something and get himself to a place where he can settle down. In other words, there are restrictions to how much he wants from the town of Presbyterian Church. I’m certain the men who have him killed won’t place similar restrictions on themselves.

As for the cast, I love to see the Altman ensemble come together, particularly Duvall and Carradine, who have minor but striking roles that expanded as their fame grew. What Altman does here—and in all his films, really—is treat the entire cast as one unified organism; beyond McCabe and Mrs. Miller, everyone else is folded into the town, and becomes part of its overall character. One fascinating detail to me is the number of Chinese people in the cast. While none of them get speaking roles, they contribute to the mines, and their presence alone separates McCabe & Mrs. Miller from traditional Westerns, which tend to be ethnically divided into cowboys and Indians.

Keith: I did a little digging in the archives to see how McCabe & Mrs. Miller was received at the time, and found mostly positive reviews. The most striking item was from a couple of years later, a Stephen Farber-penned New York Times piece called “Let Us Now Praise—Not Overpraise—Robert Altman,” published around the time of California Split’s release. (And available only to NYT subscribers.) It’s kind of fascinating: Farber complains about Altman getting the atmosphere right but never giving the characters any depth, and says his films could use less improvisation and “more control.” He discusses Altman’s inability to end films well, particularly The Long Goodbye. (He also calls Cohen’s contributions to McCabe “pretentious.”) I bring this up not to pick on Farber. It’s a strongly argued piece. It’s also a reminder that sometimes people don’t know they’re living in a golden age. That sentiment connects the film to McCabe & Mrs. Miller, a film about a lot of things, including two people finding a time and place where everything works and happiness seems possible, then watching it all slip away. McCabe now looks like the product of just such a golden age, which makes it feel more like a treasure now than ever.

Don’t miss Noel Murray’s Movie Of The Week Keynote on the ways McCabe & Mrs. Miller establishes, then demolishes its protagonists through the deals they make and the offers they don’t take. And on Thursday, Matthew Dessem concludes our examination of the film with thoughts on the book that inspired the movie.