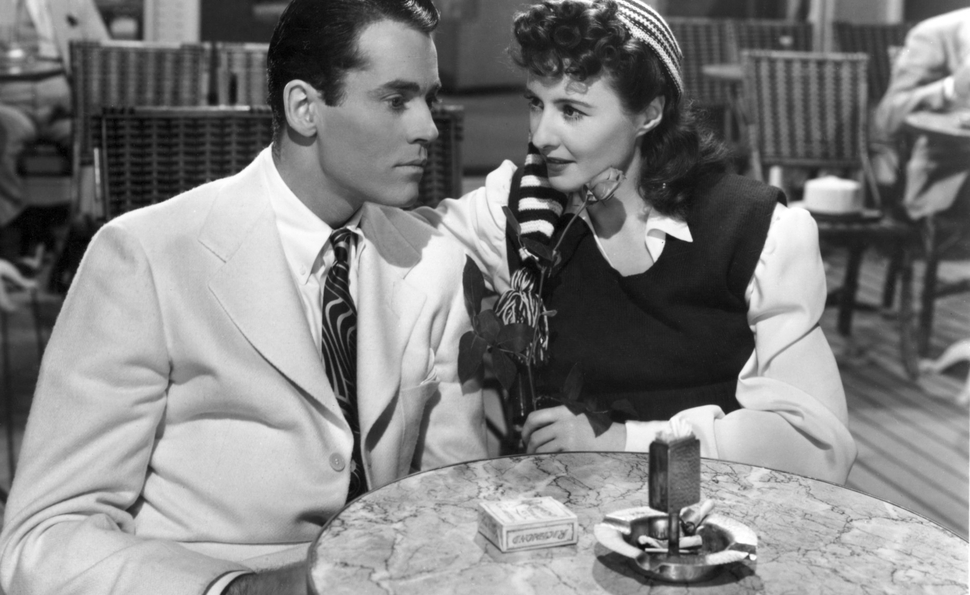 In The Lady Eve, sex makes sucker-sapiens of everyone

“They say a moonlit deck is a woman’s business office.” At around the halfway point in Preston Sturges’ The Lady Eve, Jean Harrington (Barbara Stanwyck) delivers this peculiar line after hearing a romantic pitch from Charles Pike (Henry Fonda), the naïve heir to an ale fortune. Working in cahoots with her father and partner, “Colonel” Harrington (Charles Coburn), Jean was supposed to be separating Charles from his money at cards, and he proved an exceptionally easy mark—sweet and trusting of these friendly strangers, and just cocky enough about his gambling skills to open him up to a fleecing. But Charles is disarming and handsome, and Jean proves to be a hidden romantic. Before long, they’ve fallen in love with each other. Their relationship ends the next morning, when Charles learns that Jean and her father are professional con artists, but their feelings for each other linger, as does that line, which goes a long way toward explaining what The Lady Eve is about, and why it holds such a special place among classic romantic comedies.

Leaving aside who “they” are, and whether anyone has actually ever likened a moonlit deck to a woman’s business office, The Lady Eve turns on the idea that relationships are a negotiation. That isn’t to say they’re approached as coldly and pragmatically as a business deal, but that two people have to come to terms with each other and meet somewhere in the middle, on equal footing—fully accepting their pasts, their mistakes, their quirks and peccadilloes. The movie is that negotiation, and there’s all sorts of tension—some of it romantic and sexual, some of it born of suspicion and deceit—between opposing types who have to compromise and forgive to form a true partnership. Like Adam’s Rib eight years later, The Lady Eve reaches back to the Bible as the origin for its battle of the sexes, and in both cases, the happy ending comes when the war ends in a draw.

Cleaved neatly into two halves, the second one zanier than the first, The Lady Eve starts on a luxury liner where Charles, having just spent a year up the Amazon researching snakes, is in for an adventure of another kind. The passengers—and available women—are awed by him, to the point where there’s a run on Pike’s Ale (“The Ale That Won For Yale”), but Jean takes another tack, first by dropping Eve’s apple on top of his head, and later by tripping him. If everyone else is going to treat him with reverence, she’ll push him around a little; this could be called strategy, but it’s also who she is—brazen, aggressive, and candid even when she’s telling lies. Poor Charles, earnest and a little slow on the uptake, is simply overpowered by her; in the film’s most celebrated shot, she nestles him in her arms, puts her cheek against his, strokes his ear with her right hand, and paralyzes him like the venom of one of his Amazon snakes. In his defense, few mortals could withstand one of the cinema’s most virtuosic displays of sexual confidence.

But Charles, in his simple decency and guilelessness, proves just as intoxicating to Jean, who immediately (and hilariously) defends him against her father’s devious sleight-of-hand, and stands on that moonlit deck ready to make a deal. When he rejects her after Charles’ suspicious minder (William Demarest, an apoplectic delight) uncovers her scam, Jean takes revenge by reappearing to him in the form of “Lady Eve Sidwich,” a British elite who resembles Jean in every way except a wavering accent. The resemblance trips up Charles literally and repeatedly, as he ruins suit after suit while staring agog at this ebullient woman who bewitches him yet again, but seeks to break his heart.

While it’s tempting to talk about Charles and Jean meeting in the middle in The Lady Eve, with Jean loosening Charles up a bit and Charles making an honest woman out of her. But Sturges aligns himself with the con artist, much as Ernst Lubitsch did in Trouble In Paradise. As much as Jean deceives and manipulates Charles, she’s the one holding (and dropping) the apple of knowledge, and it’s on Charles, that “fine specimen of sucker-sapien,” to take a bite. The entire second half of the movie happens because Charles has wronged Jean by not trusting her when he has reason to do so. “Why didn’t you let your father rob me last night?,” he asks, which is the right question, but one he doesn’t think through long enough. She’s redeemed herself, and he’s failed to forgive her. “Lady Eve Sidwich” is right to torment him for that.

There’s a playful subversion to The Lady Eve casting its lot with the temptress and sinner, and Sturges’ casting of the lead roles really makes it pop. As the title character in 1937’s Stella Dallas, the gold standard of melodramas about female self-sacrifice, Stanwyck played another woman with no regard for social mores, despite her ambitions as a garish status-seeker. She isn’t tentative in pursuing her desires, she doesn’t shrink in the name of propriety, and she’s in full possession of feminine powers—a modern woman, often bracingly so. By contrast, Fonda, who had never done comedy, so throughly embodied forthrightness and down-to-earth decency that he was cast as Young Mr. Lincoln two years before. To stick with the Biblical theme, Sturges found an actress who represented the “sin” in cinema, and an actor who made it seem like he’d never done anything wrong in his life.

Their chemistry is electric, but it’s some kind of achievement on Sturges’ part that Fonda, the unimpeachable good-guy type, is the one who has to change the most. When Jean tells him, “The best ones aren’t as good as you think they are, and the bad ones aren’t as bad. Not nearly as bad,” it’s the thesis statement for a film that advocates for an imperfect world, one where everyone makes mistakes, and where renewal is achieved through understanding and forgiveness. In the first half, Charles’ influence redeems Jean from her criminal scheming, but when the tables are turned in the second, his moral inflexibility becomes a key weakness. The “Lady Sidwich” revenge plot hinges on Jean’s knowledge of how his mind works: All she has to do is run through a tawdry made-up romantic history, and he practically jumps from a moving train to get away from her.

In the essential book Pursuits Of Happiness, critic/philosopher Stanley Cavell cites The Lady Eve alongside other screwball classics—namely, It Happened One Night, The Awful Truth, Bringing Up Baby, The Philadelphia Story, His Girl Friday, and Adam’s Rib—as a “comedy of remarriage,” where relationships go through a process of failure and redemption. There’s a fizzy delight to the fantasy of Jean coming back into Charles’ life under the thin guise of “Lady Sidwich,” sustained by Charles’ eagerness to leave common sense aside and embrace this intoxicating fiction. But The Lady Eve, like the other films in Cavell’s book, is serious about modern relationships and their potential to be negotiated on different terms—terms in which women play an equal role in setting the conditions for their own happiness. Only then is it a true partnership.

Join us Thursday as our discussion of The Lady Eve continues with a staff forum that dives into the Sturges touch, the film’s scorching sexuality, and the actors who bring the material to life.