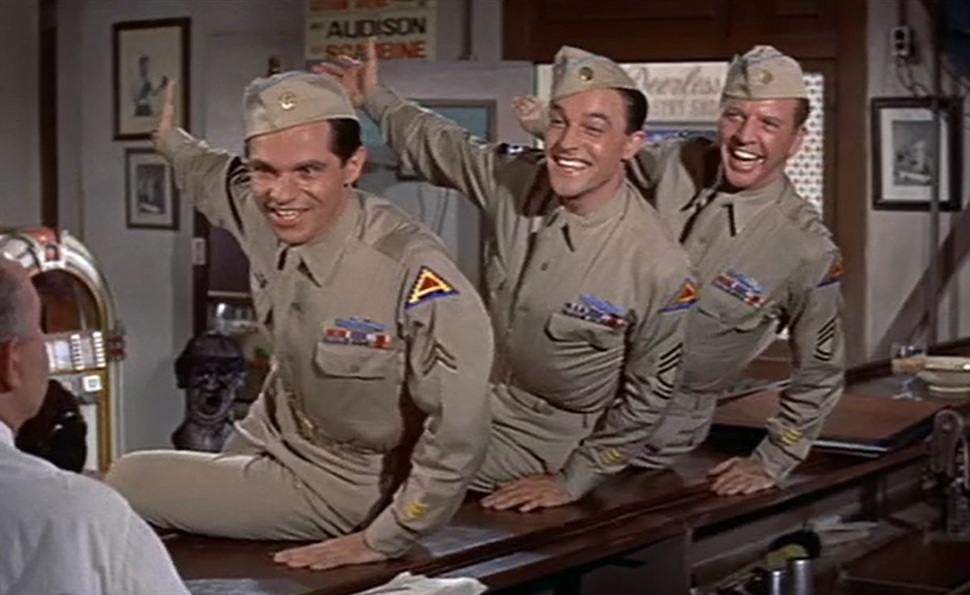 In a surprisingly frank featurette on the It’s Always Fair Weather DVD, titled “Going Out On A High Note,” co-screenwriter Betty Comden describes the film as a meditation on “the corrosive nature of time on friendship.” Comden’s comment actually undersells the film’s cynicism. At its bleakest, It’s Always Fair Weather challenges the notion of friendship, depicting it as a fragile bond of convenience that crumbles into nothingness unless diligently maintained.

The film’s famously troubled production reflects its emphasis on the delicate, combustible nature of partnerships. It’s Always Fair Weather was originally conceived as a sequel to 1949’s On The Town that would reunite director Gene Kelly with screenwriters Comden and Adolf Green and producer Arthur Freed, alongside stars Gene Kelly, Frank Sinatra, and Jules Munshin. But Munshin’s career had turned ice-cold, and MGM didn’t want to deal with Sinatra’s ego or price-tag, so they were unceremoniously replaced by Michael Kidd and Dan Dailey, and the connections between the films were severed. Kelly signed on for another tour of duty, and pressured Stanley Donen into joining him as co-director.

Donen wasn’t keen to return to co-directing after experiencing solo success as a filmmaker following his celebrated collaborations with Kelly like On The Town and Singin’ In The Rain, but was nevertheless coerced into joining a production he described as a “100-percent nightmare” due to his creative friction with his strong-willed co-director. Kelly had been directing artsy, money-losing films in Europe, and he was keen on showcasing his gifts as a dancer as extensively as possible, even if it meant cutting out Kidd’s big, expensive solo dance number over the strenuous objections of Donen and much of the cast and crew.

Onscreen and off, Fair Weather was characterized by infighting, clashing egos, and personality conflicts, which helps give the film a bracing tension rare for musicals of any period, but especially the 1950s. Where the ebullient On The Town is giddy and manic, It’s Always Fair Weather is depressive and moody. Where On The Town is a crowd-pleaser, It’s Always Fair Weather is gloomy but inspired, an unabashed downer that purposefully, brilliantly denies audiences much of what they’d come to expect from musicals, such as likeable protagonists and an upbeat sensibility.

Kelly stars as Ted Riley, a soldier who makes a drunken pact in 1945 alongside best friends and fellow soldiers Doug Hallerton (Dailey) and Angie Valentine (Kidd). Upon returning to the United States after World War II, they vow to reunite 10 years later. The world-weary bartender at the dive where the men make the pact warns them that the bonds they formed as soldiers will mean nothing to them as civilians, that they’ll forget each other like regrettable one-night stands, but the men are far too drunk and giddy to listen to him.

The men return home with big plans. Ted longs to marry his sweetheart, Doug aspires to be a great painter, and Angie wants to be a great cook. But their dreams soon crumble. Ted’s beloved is betrothed to another man, and the true romantic becomes a womanizer, gambler, and small-time hustler who ends up managing a punch-drunk boxer who’s already agreed, without Ted’s knowledge, to take a dive in a fixed fight. Doug becomes a financial success by abandoning his dreams of becoming the next Renoir in favor of designing asinine ad campaigns for Klenzrite, a laundry detergent promoted by Midnight With Madeline, a Queen For A Day-like show that orchestrates unexpected reunions and other human-interest pieces for the voyeuristic delight of home audiences. Angie’s ambitions to become a great chef go no further than giving his greasy little hamburger joint a pretentious name.

Ted, Angie, and Doug saved the world from fascism only to return home to a world where their skillsets are wasted managing crooked boxers, grilling hamburgers, and convincing housewives to buy laundry detergent. The men are all deeply immersed in self-loathing, and when they reunite in 1955, they discover they can’t stand each other, either. With the war long over, they have nothing in common. The other men rightly dismiss Doug as a pretentious snob, Angie as a defensive brute, and Ted as a sleazy cad. The old stories and inside jokes register as little more than foggy half-memories, and the three go their separate ways, seemingly for good.

Little does the mismatched trio realize that the forces of commerce are conspiring to bring them together at least one more time, this time for the human-interest segment of Midnight With Madeline. When Madeline (Dolores Gray) nixes that night’s particular surprise guest, her idea woman Jackie Leighton (Cyd Charisse), proposes tricking Angie, Ted, and Doug into reuniting once more, this time at midnight and in front of a studio audiences of millions.

It’s Always Fair Weather initially picks up where On The Town left off, beginning with a blast of high spirits that quickly curdle into something darker and more despairing. It’s telling that the most joyous sequence of the film—an elegant production number set to “I Like Myself,” which Ted croons while mooning over Jackie—celebrates a temporary, unexpected respite from self-loathing, rather than a more permanent shift. In “I Like Myself,” Ted glides across the mile-wide Cinemascope screen in roller skates and in an even more astonishing, ankle-abusing feat, tap-dances with skates on as he celebrates the way new love, or at least the giddy thrill of new infatuation, can liberate a tortured man from a prison of self-hatred.

It’s Always Fair Weather sometimes recalls the subversive pop satire of Frank Tashlin, but the film’s take on television and advertising is even more savage in its depiction of television as a viper’s nest of hypocrisy, phoniness, and exploitation. Through manipulation and flirting, Jackie and Madeline ensure that Ted and Angie are present at the taping of Midnight With Madeline, where their reunion with Doug is the centerpiece of an evening of melodrama that doesn’t play out as planned.

For Madeline, the televised reunion of the central trio is a moment of great triumph, but the men look like they’d rather be in front of a firing squad than in front of cameras. Madeline, however, is so trapped in a bubble of self-absorption that the men’s misery barely registers. But just as It’s Always Fair Weather rejects musicals’ tidy, crowd-pleasing conventions, its prickly antiheroes reject Madeline’s efforts to reduce their complicated, painful shared history to a simple, heartwarming narrative of friendship triumphing over adversity.

The troubled trio are estranged because they have nothing in common, and their lives have led them in vastly different directions, but also because they lack a common enemy. Thankfully, Comden and Green provide them with several new foes nearly as ferocious as the Axis Powers. There are the mobsters out to punish Ted for knocking out his own fighter before he could go down in a fixed fight, but also, on a less immediate level, exploitative television producers and an advertising world that manipulates the lives of fragile people to mercenary ends. The climax of It’s Always Fair Weather finds the men united in battle once again, only this time, against mobsters in an all-out brawl captured on live television. It isn’t love that brings the boys together, but a chance to pummel the bad guys. Once they have common enemies, these alienated former friends begin to find common ground.

In one of the film’s many ironies, the show Madeline hosts doesn’t just survive Doug, Ted, and Angie’s justly earned contempt and criticism: It absorbs it and grows even stronger. The fellows may have exposed Madeline as a preening, condescending phony, promoting a sentimental fiction to a gullible audience, but she barely seems to notice, and she ends the broadcast convinced, understandably, that a show that climaxes with an epic brawl and an unwitting criminal confession from Ted’s mobster enemy is bound to get boffo ratings.

Confronting criminals, television folks, and advertisers renews the boys’ bond, and they head back to the bar where they promised to reunite 10 years earlier. The film nods faintly toward a happy, or at least bittersweet, ending by bringing the boys back together in a moment of boozy, triumphant bonhomie, but it ends, honestly and poignantly enough, by sending them on their separate ways. Will they remain friends? Will they ever even meet again? The film ends ambiguously, but it seems likely that without a war, a TV show, or a brawl to unite them, they may very well have seen the last of one another.

Like Donen and Kelly, these men accomplished great things together, then went their separate ways. It’s Always Fair Weather has an elegiac quality. It arrived at a curious crossroads in American pop culture where many of the factors that brought On The Town into existence had shifted. The studio system was on its way out. The nation no longer had a World War to unite it or inspire unparalleled displays of patriotism. Television loomed as a huge threat to the financial future of film, and Donen and Kelly’s fruitful partnership was conclusively destroyed by the unhappy experience of making It’s Always Fair Weather, an ironically named film if ever there was one.

It’s Always Fair Weather also represented one of the last gasps of MGM’s fabled Freed Unit. From the late 1930s through the 1950s, Freed’s lushly produced, elegantly designed musicals provided a quick vacation into a world of glamour and fantasy for a populace rocked by the long shadow of the Great Depression and World War II. MGM specialized in breezy escapism, but It’s Always Fair Weather reflected the anxieties of its times all too vividly for audiences unaccustomed to musicals overflowing with post-war existential ennui. Freed operated cinema’s premier Dream Factory, but Weather depicts friendship, television, and advertising in ways that border on nightmarish. It’s Always Fair Weather is among the darkest and most cynical of classic Hollywood musicals, which might help explain why it’s also among the most contemporary-feeling.

Our Movie Of The Week discussion continues tomorrow with a staff Forum about It’s Always Fair Weather’s style, how it satires the Television Age, and its melancholy vision of the post-war era.