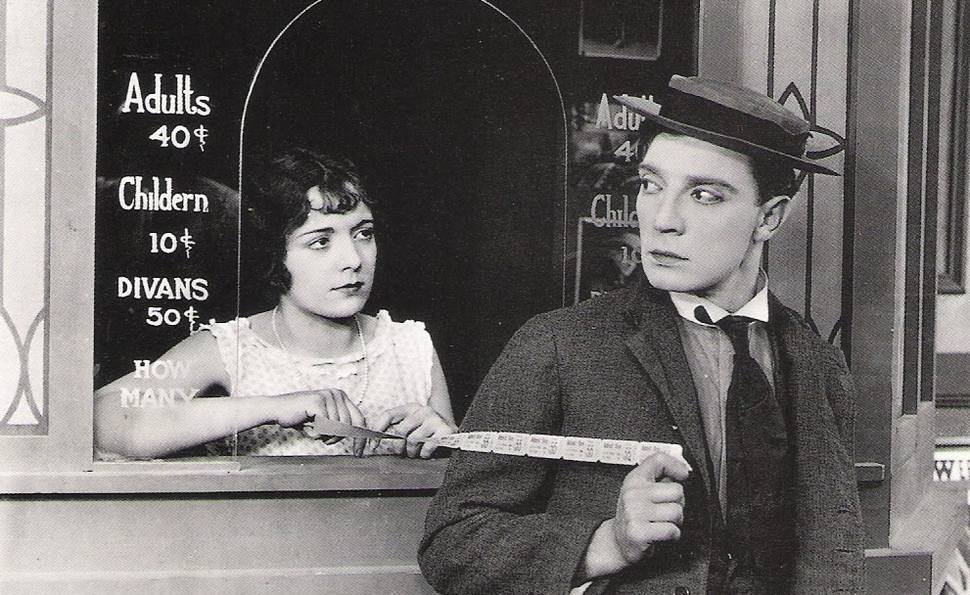 The boxes and lines of Sherlock, Jr.

Forget three dimensions; Buster Keaton only needed two, and sometimes just one. In one of the most memorable sequences in Keaton’s 1924 masterpiece Sherlock, Jr., Keaton’s unnamed hero—nicknamed “Sherlock, Jr.” because that’s the fictional character he emulates—follows the man who framed him for the theft of the watch belonging to his girlfriend’s father. The amateur detective shadows his mark closely, with both of them moving from right to left on the screen, in pretty close to a straight line. Then the hero scrambles atop a moving train, and starts running left to right, making no progress. Finally he escapes the railroad treadmill and runs away—but it’s where he runs that’s unusual. After a few minutes of gags based on Keaton moving on the same plane as the other characters, his character suddenly takes off into the horizon, shrinking to a dot as he disappears into the distance. It’s as though he’s discovered some kind of magical power, to go somewhere other than left, right, up, or down.

For the most part, Sherlock, Jr. is a film about a rectangle. Keaton’s character works as a projectionist at a movie theater, and spends his days looking at a screen, daydreaming. For almost all of the first half of Sherlock, Jr., the hero finds himself trapped on the wrong side of a mystery, as the projectionist’s romantic rival “the local sheik” (played by Ward Crane) horns in his date with “the girl” (Kathryn McGuire), and then gets Our Man in dutch with his future in-laws by swiping the pocket watch of “the girl’s father” (played Joe Keaton, Buster’s real-life dad). Then while he’s stuck at work, worrying about his problems, the projectionist drifts off to sleep and dreams that he’s entered a movie mystery that resembles his own situation, with all of the characters replaced by the people he knows—and himself playing “Sherlock, Jr.”

The montage that heralds the projectionist’s entry into his screen is one of the most famous sequences in cinema history; and in Keaton’s filmography it’s up there with the house frame falling around him in Steamboat Bill, Jr. as a “signature scene.” In the montage, the scenery keeps changing behind the hero, such that a bench is removed before he can sit on it, an ordinary street turns into a steep cliff before he can walk off-frame, and a mound of dirt in the desert becomes a rock on an ocean shore as the tide crashes in. Every bad thing that happens to the projectionist occurs in the space of a cut, and serves to keep him trapped inside the box. He’s a prisoner of cinema—and of all the tricks at a filmmaker’s disposal.

After that montage, the time that the projectionist spends inside the movie is relatively normal, at least at first. If nothing else, as “Sherlock, Jr,” the hero has pretty good command of his situation, even effortlessly sniffing out and avoiding the bad guys’ attempts to kill him with an exploding billiard ball. Only later does the hero finds himself: sitting on the handlebars of a driverless motorcycle during a high-speed chase; avoiding disaster by zooming along the top of trucks that have strategically pulled into place to cover the gaps in a bridge; and escaping pursuit by diving through the suitcase of a peddler. In other words: He’s living inside of a movie, at least judging by his incredible luck and the impossible things he’s able to do.

Comedy thrives inside a fixed frame. It’s not an essential element, but as with dancing and magic tricks, it’s always more impressive if the viewer can see the performer’s hands and feet at all times. In Sherlock, Jr, Keaton moves the camera when he has to, during all of the movie’s crazy chases. But even then, the motion is limited: Keaton tracks alongside the actors, or he attaches the camera to the front of one of the moving vehicles so that he can keep all the action inside the rectangle. Sherlock, Jr. is at its funniest, though, when the camera stays still, and the characters move in and out, like figures in a side-scrolling platform videogame. Maybe that’s because the fixed frame emphasizes the characters as characters, arriving into the picture exactly when needed for the plot—and sometimes remaining stuck there, like the projectionist, never confident that he can find a way to break out of the box.

In the projectionist’s case, he improvises within the box, finding a vertical or horizontal line he can jump on that will lead him out of immediate trouble. That’s how Keaton constructs his gags in so many of his silent classics: He locks his stone-faced hero into a path that the audience can see is about to lead him into trouble, and then at the last second, Our Man switches paths, like a train moving onto a siding. In Keaton’s world, nearly every problem can be solved through simple geometry. Only very rarely are sharp diagonals involved.

Sherlock, Jr. is a landmark film, widely regarded as one of the greatest in the history of silent comedy, and rivaled only by The General in Keaton’s own filmography. It has that reputation not just because of the quality of the gag construction—which is stellar—but because it has a point of view. It’s a movie about movies, opening with a minor bit of visual deception in which the projectionist removes his fake mustache, and then continuing to show the hero as a man to whom fakery comes easy. He changes the price tag on a box of candy so that his girlfriend will think he spent more on her than he could afford. He brings along a magnifying glass so that the diamond on the ring he bought her will look bigger. As a man steeped in movies, he knows how to put on a show, all the time.

That satire of cinematic phoniness is intentional. As for the way Keaton uses the frame, that’s more a matter of comic instinct, and Keaton’s understanding that clean lines make for punchier jokes. Still, when Sherlock, Jr. opens with a warning that no one should “try to do two things at once and expect to do justice to both,” that could refer both to the projectionist’s attempts to moonlight as a sleuth, and to the way that Keaton approaches his storytelling—by not really differentiating much between the movie the hero is already in and the movie he enters when he dreams. In comedy terms, both worlds are built to serve the gag. It’s easier on the filmmakers that way.

The distinction only becomes relevant in those moments when the projectionist performs his own equivalent of movie magic: by deviating from the X and Y axes. But the reverse is true as well, in that the characters in Sherlock, Jr.’s movie-within-a-movie have powers beyond what the projectionist can understand. Sherlock, Jr. has a great stinger gag after the hero’s innocence is confirmed, when he’s back with his girlfriend and watching a movie with her in the projection booth, wooing her by mirroring the moves of the lover on screen. After the boy kisses the girl in the movie, the picture fades out and then fades back in to the happy couple holding a baby. And the projectionist can’t figure out how they did that, because in the movie he’s in—the one called Sherlock, Jr., made in the 1920s—all the steps elided in editing can’t be shown on screen, no matter where Keaton sets the camera.

Come back tomorrow as our Sherlock, Jr. discussion continues with a staff Forum on the film’s distinctive approach to comedy and montage, and the experience of watching silent films in the sound era. Then on Thursday, Matthew Dessem will share the sad history of Sherlock, Jr.’s co-writer, Clyde Bruckman.