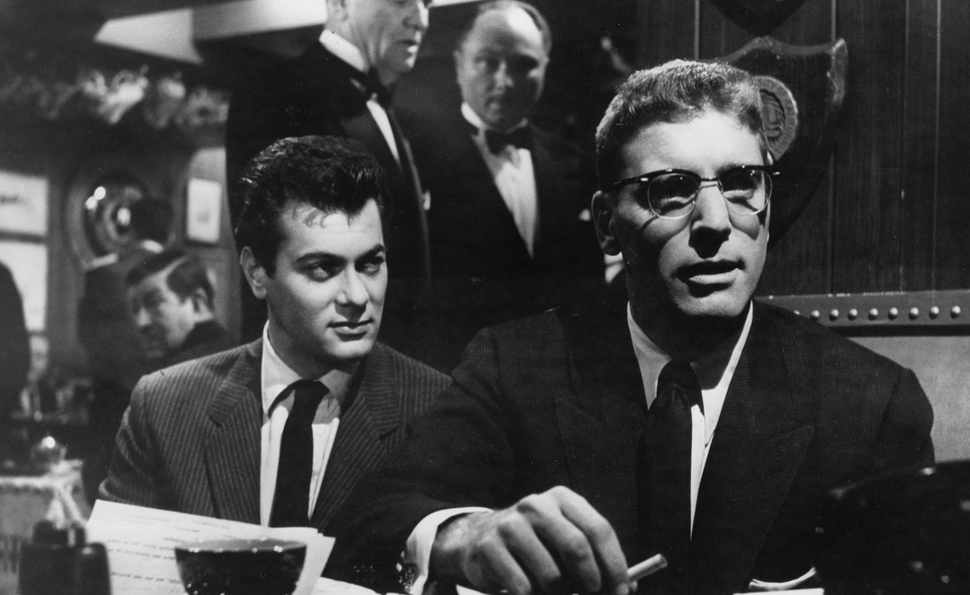 Keynote: Sweet Smell Of Success and the moral tarpit of show business

“Mr. Falco, let it be said at once, is a man of 40 faces, not one—none too pretty, and all deceptive. You see that grin? That’s the Charming Street Urchin face. It’s part of his helpless act: He throws himself upon your mercy. He’s got a half-dozen faces for the ladies. But the one I like, the really cute one, is the quick, dependable chap. Nothing he won't do for you in a pinch, so he says. Mr. Falco, whom I did not invite to sit at this table tonight, is a hungry press agent, and fully up to all the tricks of his very slimy trade.” —Burt Lancaster, Sweet Smell Of Success

Consider Sidney Falco, the bottom-feeding press agent at the center of Alexander Mackendrick’s scabrous showbiz noir Sweet Smell Of Success. His job is to get his clients a few precious words in the columns of all-powerful men like J.J. Hunsecker (Burt Lancaster), whose endorsements can make careers as surely as his poisonous gossip can end them. And the fight for those words becomes a daily, soul-diminishing grovel that requires endless lying, dirty dealing, manipulation, ingratiation, and fiendish little tricks of the trade. At a nightclub where Hunsecker is working over a U.S. senator, he describes Sidney as having 40 faces, like “the Charming Street Urchin face,” and it’s true. That’s part of his “very slimy trade.” But how many of those faces can Sidney bear to see reflected back at him in a mirror? How can he live with himself?

Much of the pleasure of watching Sweet Smell Of Success—beyond the evident glories of Ernest Lehman and Clifford Odets’ peerless dialogue, James Wong Howe’s noir-inflected black-and-white cinematography, and Elmer Bernstein’s jazzy score—comes from luxuriating in the moral tar pit in which these men conduct their business. It’s a thinly veiled shot at one gossip columnist in particular: the famously vindictive Walter Winchell, who did everything he could to make sure the movie tanked—which it did, though that wasn’t due to Winchell’s power, so much as the way it holds nothing back in depicting him and his ilk as the petty succubi of American culture. Though it’s unusual to see a drama (albeit a venomously funny drama) photographed like a crime movie, there’s no dimmer view of humanity’s potential for evil than Sweet Smell Of Success, and none as uncompromising to the finish.

And yet again, consider Sidney Falco. Specifically, this detail: 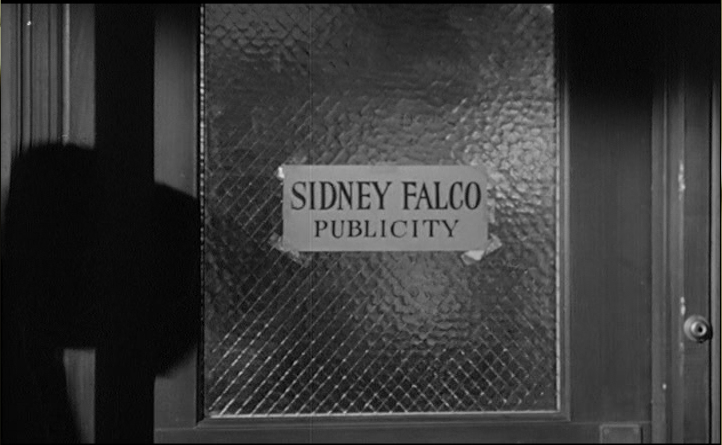 The toehold Sidney has in this business is right there on the sign, crudely taped to the door of what appears to be a one-room apartment, with the secretary in the living room and the boss in the bedroom behind her. As the film opens, it’s been five days since Hunsecker has included one of his clients in the column, and in the trickle-down economy of New York’s show-business scene—where ink drips from Hunsecker’s column into parched mouths of those in his service—that puts Sidney on the brink of collapse. “Pay the rent and tell the tailor to wait,” he advises his secretary on calls from creditors; calls from clients are either answered with slippery evasions, or avoided altogether. Whatever Faustian bargain Sidney struck with Hunsecker happened many favors ago, but in Tony Curtis’ extraordinary performance, there are glimmers of the soul-sick man who has to do terrible things to stay in business. After all, he’s only hanging on by a few pieces of Scotch tape.

The reason for Sidney’s exile is his failure to orchestrate a breakup between Hunsecker’s sister Susan (Susan Harrison) and Steve Dallas (Marty Milner), the earnest young jazz guitarist who’s been courting her. Lehman, Odets, and Mackendrick only go as far as they need to in detailing the pathology of Hunsecker’s connection to his sister—which mirrors stories about Winchell’s relationship with his daughter Walda—but suffice to say, no other man will be good enough for his Susie. And so Sidney starts pressing contacts: First Steve’s agent, who swears he’s been trying to keep them apart; then Steve and Susan, who have actually agreed to get married; and finally other gossip columnists he can arm-twist into a running a blind item about a pot-smoking, Commie-loving jazzman. (Defaming enemies as “pinkos” was a favorite Winchell gambit.)

While Sidney works every angle he can, the filmmakers carefully delineate the operators in this moral universe—the desperate, the lecherous, the wicked, and those most pitiable creatures, the genuinely decent. Sidney tries to use the information that one columnist was hitting on cigarette girl Rita (Barbara Nichols) to blackmail him into the running the smear against Steve in his column; the man surprises him by confessing to his wife straight away, rather than compromising his work. Sidney then exploits Rita by setting her up with a willing second columnist in exchange for helping her down the line. It’s perhaps the lowest moment in the film—the columnist leering like a dirty old man, Rita’s eyes sinking as she acquiesces, Sidney dashing out of the room like a thief—and it ends a sequence that best demonstrates the scum-sucking bottom of the show-business food chain. On top of a talent for manipulation and a near-complete lack of scruples, that’s what makes Sidney a good press agent: He’s keenly aware of his place in the hierarchy.

There’s little question that Sidney and J.J. will eventually get their way when it comes to Steve and Susan’s relationship; as J.J. himself condescends to Steve, after delivering the death blow, “Son, I don’t relish shooting a mosquito with an elephant gun, so why don’t you shuffle along?” But it’s key to the film’s poisonous overview of the scene that the triumph be as petty and small as it is needlessly destructive. There’s a kind of diabolical brilliance to Sidney’s behind-the-scenes orchestration, but think about what has been accomplished: A perfectly happy couple driven apart, the career of an up-and-coming jazz guitarist in ruins, a marriage strained by a columnist’s confessed near-infidelity, a woman prostituted for column space. It’s all human wreckage, and it doesn’t even play out for the edification of gossipmongers. The only thing that makes it to print is the blind item on Steve, which is likely of less-than-marginal interest to readers. The real dirt isn’t fit for print.

Lancaster was shot from low angles, like Orson Welles in Citizen Kane—Welles, in fact, was considered for the part—and his lean, 6-foot-1 frame towers over everyone like the Empire State Building, marking him as the clear king of his little show-business fiefdom. Like any king, he collects taxes for every piece of real estate in the kingdom—and Sidney, his faithful lapdog, gets kickbacks in column inches. But how much, Sweet Smell Of Success implies, are men like these really needed? Who’s being served? By the evidence here, J.J.’s columns are half favors granted, half revenge exacted, but readers don’t benefit from either; what actually fuels them are tempests in teapots, internecine battles that are of no interest to anyone beyond the people ruined by them. It’s a bitter irony that the one seemingly genuine passage viewers hear from J.J.’s column—his praise of an old vaudeville comedian as the funniest man in town—turns into an opportunity for Sidney to make the comic believe he had J.J.’s ear, and exact $100 a week from the comic for publicity services. Such is the business of show.

Tomorrow, our Movie Of The Week forum discussion examines the film’s eccentric dialogue and pungent takes on New York and show business. Then on Thursday, Nathan Rabin looks at the Hollywood career of Success co-writer Clifford Odets, who also inspired the character of Barton Fink.