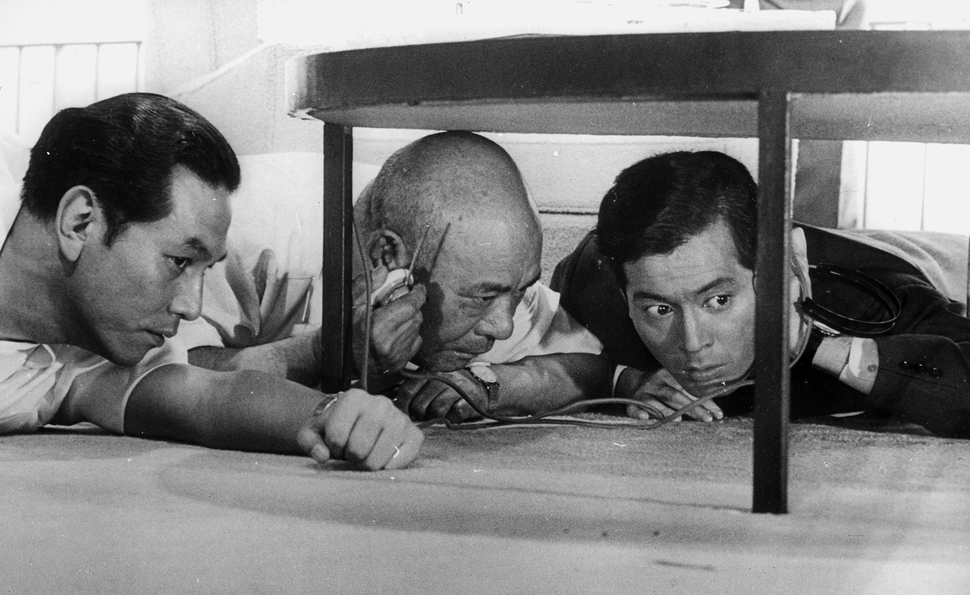 The highs and lows of High And Low

In his slim instructional volume On Directing Film, David Mamet writes “there are two subdivisions of the thespian’s art: one is called Acting, and the other is called Great Acting.” The latter, he argues, calls attention to itself in a way that’s more likely to be noticed and praised, while the former, though superior, is frequently all but invisible. Arguably, both approaches have their merits, depending upon the context, but it’s certainly true that some of the finest screen performances wind up being undervalued.

By the same token, there’s Directing and there’s Great Directing. The present age is extremely enamored of Great Directing, which tends to involve camera movements so ostentatious that even viewers without much technical knowledge can register their difficulty. Throw a complicated six-minute tracking shot into an episode of True Detective, and watch Twitter light up the instant it airs. That sort of tour de force can be genuinely impressive—Orson Welles didn’t exactly botch the opening shot of Touch Of Evil—but it makes it hard for people to notice work that’s equally sophisticated, but less showy.

High And Low rarely gets mentioned when cinephiles talk about the medium’s most masterful formal achievements. Even among Akira Kurosawa’s films, Seven Samurai, Throne Of Blood, and Ran are more likely to be cited for purely visual mastery, if only because they’re all more superficially dynamic. But few movies have ever been as subtly, methodically composed as High And Low, in which every shot reflects, to some degree, the dichotomy presented by its title. The film’s narrative is neatly bifurcated between high and low, both literally (meaning geographically) and figuratively. Kurosawa’s camera follows suit, employing wholly different modes in its first and second halves. It’s almost hard to believe that certain sequences were directed by the same man, much less that they belong to the same picture.

Most of High And Low’s first half is confined to a single room in the hilltop mansion of shoe-company exec Kingo Gondo—a room, Chief Detective Tokura points out, that can easily be seen with a telescope from the slums below. There are often as many as 10 characters occupying this room at once: Gondo; his wife and son; the chauffeur whose son was actually kidnapped; Gondo’s secretary; Detective Tokura; and three or four of his men. The director’s job is to ensure this crowded set doesn’t devolve into random chaos, and to block the action cleanly and neatly. Kurosawa goes much further, continually reframing his actors with small, decisive camera movements that don’t call attention to themselves, yet always clarify visually what’s most important at any given moment. At the same time, he isn’t afraid to just cut to a new angle when that’s the most effective choice—no shot is extended for its own sake, or intended merely to impress. Many of these tiny shifts in perspective are only perceptible to viewers who pay close attention, though their impact can readily be felt, even when they don’t register consciously.

Here’s an example: Kurosawa begins this shot with a panoramic view of the entire company, placing Detective Tokura (Tatsuya Nakadai, wearing the dark suit) at the frame’s center, evenly flanked by the room’s other occupants. Everybody is clearly visible, but by far the least prominent person in the shot is the chauffeur, most of whose body is obstructed, significantly, by Gondo (Toshirô Mifune, seated at left). At this point in the film, the kidnapper hasn’t yet made his demands, so nobody knows that the chauffeur’s son’s life may depend on Gondo’s willingness to pay an enormous ransom. Nonetheless, Kurosawa is already foreshadowing that moral conflict visually, and at the end of the previous shot, Mifune and the two actors playing the technicians (to his right) actually get into place to create this composition, even though the camera is on the opposite side of the room.

As Detective Tokura discusses what’s happened in previous kidnapping cases he’s worked, he walks to the left, and Kurosawa responds by simultaneously following him and pushing the camera forward slightly. This creates, within the same shot, an entirely new composition, one that now calls attention to the distraught chauffeur, fully visible at the frame’s right edge, by means of having his body interrupt what’s otherwise a ruler-straight inclined plane. Tokura leans forward, for no very good reason, so his head is located at the midpoint between the standing bald dude and the seated Gondo; this can’t help but send viewers’ eyes sliding down a path that careens into the poor chauffeur.

Having shown the audience where to look, Kurosawa has the chauffeur take two steps to the right, asserting his presence for the first time in the scene. Detective Tokura immediately moves toward him, and Kurosawa reframes the shot (it’s still the same shot) again—returning to the panoramic group view, but now with the chauffeur sharing the center of the frame with the detective, and Gondo marginalized at the far left. Tokura assures the chauffeur that the police will do everything they can to recover his son—words that quickly prove to be empty, since only Gondo and his fortune really matter. And Kurosawa wastes no time in making that clear by reconfiguring the room a fourth time.

This is still the same shot, though he arrives at each new composition so casually that it never feels as if anything extraordinary is happening. Detective Tokura has ordered his men to take statements from the chauffeur and from Gondo’s son (who’s in another part of the house), and some of the characters are filing out of the room. Gondo has moved from his negligible location in the previous arrangement to a focal point at the bottom of the frame, slightly right of center; Mifune puts his hand to his mouth in a pensive pose, indicating that Gondo knows what may transpire, and is already trying to decide what to do. Meanwhile, Tokura’s body now obstructs any view of the chauffeur, signifying the detective’s inability to be the savior Kurosawa’s last composition briefly implied.

That’s just one quick example, lasting less than two minutes, in a series of quietly bravura moves that takes up High And Low’s entire first hour. What’s more, Kurosawa never lets us forget where the story is taking place: in a rich man’s palatial house, atop a tall hill overlooking the rest of the city. Though this room is frequently crowded with people, scenes involving just two or three characters are carefully composed to emphasize its enormous size. Kurosawa often pushes his actors to extreme edges of the widescreen frame, as here:

Usually, this technique underscores emotional distance between characters, but in High And Low, it’s fundamentally a reminder that the characters still very much high, where there’s space to burn—that is, room to make choices. In the film’s second half, the camera descends to the city below, abandoning Gondo and his plight, and focusing on the police’s efforts to find the kidnapper. The difference is stark.

Lately, some filmmakers have been fooling around with multiple aspect ratios: Oz The Great And Powerful began in the old Academy ratio (nearly square) before opening up to a widescreen format, and Wes Anderson’s forthcoming The Grand Budapest Hotel reportedly employs three different ratios throughout. What’s really tricky, however, is using the same aspect ratio to achieve radically different results. The shot above sees the cops discovering the location where the chauffeur’s son was held—a small, ramshackle house near the ocean. The screen is just as wide as ever, but Kurosawa deftly juxtaposes this space with Gondo’s home by placing the four characters in two specific locations—the three adult men grouped together at a window, and the chauffeur’s son (who led them there) visible through another window at the far right—and filling the center of the frame with a nondescript curtain. Combined with a shallower depth of field, this creates the impression of an extremely tight, enclosed space where choice is a luxury.

Even the many scenes involving the cops make a point of emphasizing their position relative to Gondo’s. Look how many of them are crammed into this shot. There’s even a small table fan pointedly visible, to provide a sense of how uncomfortably hot the room must be.

The kidnapper himself, unlike almost anybody else in the movie, tends to be shot in tight closeups that depict him as hemmed in, even before the cops are hot on his trail. In the movie’s remarkable final scene, he complains to Gondo about the conditions of his room, saying it’s too hot in the summer, and too cold in the winter. Kurosawa barely offers a decent view of the hovel, however. What matters is that the kidnapper can see Gondo’s mansion from his window, and that he perceives it as mocking his poverty.

In the movie’s most extraordinary sequence, Kurosawa follows the kidnapper as he descends even further, attempting to score some uncut heroin (to murder his accomplices, because he doesn’t realize he’s already murdered them) at some sort of crazed bacchanal in downtown Yokohama. The original Japanese title translates not as High And Low, but as Heaven And Hell, and Kurosawa cagily depicts this milieu as extremely dangerous, but thoroughly, almost overpoweringly alive. Apart from occasional cutaways to Detective Tokura and his men, the sequence is wordless, driven by the boisterous sound of jazz; visually, it’s as chaotic as the scenes in Gondo’s house were spare and precise, though Kurosawa is so skilled that he has no difficulty drawing viewers’ eyes to the kidnapper (wearing shades) even in a huge crowd.

And then there’s “Dope Alley,” the junkie hangout where the kidnapper goes to find an expendable guinea pig as a test subject for his lethal drugs. Kurosawa provides a panoramic view with the kidnapper front and center, not unlike the first composition in the illustrative shot from Gondo’s house. The effect down here, however, is different—partly just because there are many more people in the shot, but also because Kurosawa sets the kidnapper apart from everyone else, emphasizing the disposability of these lost souls. Nor do their environs, despite the widescreen ratio, look nearly so sprawling.

No shot in High And Low particularly stands out from the others, but every shot contributes to the film’s central dichotomy: high/low, heaven/hell, grandiose/mundane, privilege/squalor. The point isn’t to elicit astonished gasps or appreciative murmurs, but simply to use the camera in whatever way best communicates the story’s essence in images. That’s not Great Directing. It’s just great directing.

Our Movie Of The Week discussion of High And Low ends here. Don’t miss Tuesday’s Keynote on how the film reflects the Japanese sense of social duty, and Wednesday’s staff forum on how Kurosawa addresses class, capitalism, and the present day. Join us next week for our discussion of American Movie.