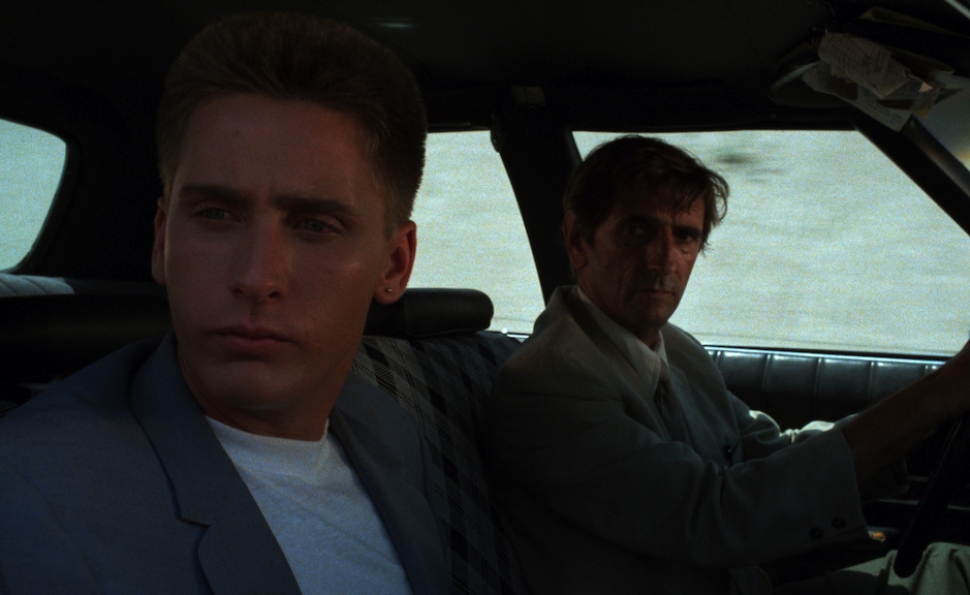 “I was a teenage dinosaur, stoned and obsolete”: The lure and lessons of Repo Man’s soundtrack

The punks in my high school used to say that nobody ever bought the Repo Man soundtrack. Everyone’s copy had either been borrowed or duped from a friend, or stolen outright. (Me, I did all three at once: I stole a duped cassette from a buddy, who’d borrowed it from someone else.) It was a joke that felt true, because everything related to Repo Man had that passed-around quality, as though the movie and everything associated with it was a secret, meant to be shared only between members of a private club.

In the real world, though—where money matters more than cachet—the soundtrack actually sold so well, it helped save Repo Man. According to Sam McPheeters’ essay “Repo Man: A Lattice Of Coincidence” (available in the liner notes of The Criterion Collection’s Repo Man Blu-ray and DVD), Universal pulled Repo Man from theaters a week after it opened, and only gave the picture another run after MCA Records sold more than 50,000 copies of the soundtrack. Interest in the music revived interest in the movie, which went on to become a solid cult hit at theaters, and then a staple of video stores, in an era where consumers were open to renting strange little films based solely on word of mouth.

Repo Man and its soundtrack functioned as introductions of a kind. For those who picked up the soundtrack (legally or otherwise), it was a way into the West Coast hardcore punk scene. For those who rented the videotape, it was a way into “weird” cinema. For me, the popularity of both the movie and the music among my circle of friends mainly served to validate some directions in which I was already headed. 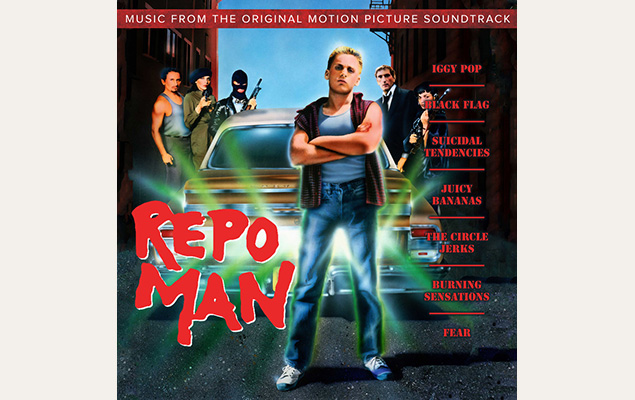 I was about 16 when I first saw Repo Man. (On home video, around 1986 or so; if the film played theatrically in middle Tennessee in 1984, I wouldn’t have known about it at the time, nor would I have been old enough to go.) Mainstream Hollywood movies at the time emphasized bigness and newness, which meant that outside Steven Spielberg’s traditionalist blockbusters, cinema seemed divorced from its own past, which left budding film buffs like me feeling alienated. Beverly Hills Cop, The Karate Kid, Footloose, and Splash—all hits in 1984—were buffed and slick, from their music to their cinematography, feeling dated almost from the moment they were released. Then along came Alex Cox, sharing his infatuation with B-pictures and spaghetti Westerns with my punker pals, making cinephilia itself seem cool.

The soundtrack had a similar effect. I was always more a fan of punk as a musical style and ethos than as a scene. I freely admit that I was never that committed to my ripped-up clothes or anarchy buttons. (I was the very definition of a poseur.) But as somebody who’d been listening intently to and reading about rock history since I was 12, I was fascinated by punk as a link in a larger chain. And the idiosyncrasies of the Repo Man soundtrack acknowledged that chain, establishing there was more to punk than just raw aggression.

Not that the soundtrack lacks for raw aggression, goodness knows. For the punkers in my crowd, the Repo Man soundtrack was largely defined by four tracks: Black Flag’s “TV Party,” Suicidal Tendencies’ “Institutionalized,” Circle Jerks’ “Coup D’Etat,” and Fear’s “Let’s Have A War.” Suicidal Tendencies’ self-titled debut LP—the original home of the storming “Institutionalized”—was pretty widely popular in the punk scene of the mid-1980s, and I was even aware of a few intrepid souls in my crowd who owned Fear’s gonzo 1982 classic The Record, which at the time was more for connoisseurs. But for the most part, these four songs lived on the Repo Man soundtrack, where they represented some of the most exciting aspects of West Coast hardcore: the flippant tone, the macho bluster, and the constant threat of violence. These songs about drinking, fighting, and flipping off authority figures exemplified “punk.”

Well, mostly. No regional scene is ever as cut-and-dried as musicologists might like to think, but generally speaking, the version of punk that emerged in New York in the mid-1970s—and directly inspired the U.K. punks—had its roots in a streetwise, low-rent corner of the art world. In Los Angeles, meanwhile, punk was generally rougher and angrier, taking the class-conscious elements of the U.K. scene and crudely translating it to the culture of California, with hippies and corporate stooges standing in for the aristocracy. But there was another side to L.A. punk, too, seen in bands like X and the Minutemen, who sported a broader range of influences, and seemed engaged with more than what was going on inside some mohawked teenager’s basement.

That side of the scene—the side that had slamdance-stoking L.A. bands sharing bills with the likes of Los Lobos, The Blasters, and The Go-Gos—was a big part of the Repo Man soundtrack, too. One of Repo Man’s music supervisors was Tito Larriva, frontman for the Chicano punk act The Plugz, which provided three songs on the soundtrack: the Latin-tinged rocker “El Clavo Y La Cruz,” a Spanish-language version of the rockabilly classic “Secret Agent Man,” and an Ennio Morricone-inspired instrumental titled “Reel Ten.” The eclecticism of The Plugz extends to the rest of the record, which includes Circle Jerks doing a tongue-in-cheek lounge-music version of its hard-rocker “When The Shit Hits The Fan,” and the quirky pop band Juicy Bananas turning some of the movie’s more quotable dialogue into the spoken-word blaxploitation homage “Bad Man.”

Punk in the mid-1980s could be distressingly purist, with its adherents automatically dismissing anything that wasn’t fast and furious enough. By contrast, the Repo Man soundtrack stood up for the beating heart of punk, which was more about providing a home for outcasts of all stripes. Repo Man was inclusive of eccentricity and offbeat subgenres—anything that fit what X once dubbed “The Unheard Music.”

The soundtrack also stood up for punk’s roots. The L.A. new-wave act Burning Sensations covered Jonathan Richman’s song “Pablo Picasso,” which originally appeared on The Modern Lovers’ self-titled, proto-punk debut album. And to kick off the record? Punk’s godfather, Iggy Pop, writing and singing the movie’s title track—as blistering a song as he’d recorded since “Lust For Life,” seven years earlier. Though “Repo Man” the song is more heavy metal than punk, Iggy Pop himself was a progenitor of both styles, and on “Repo Man,” he’s backed by former Sex Pistols guitarist Steve Jones, which effectively connected punk’s origins and its first big heyday to what was happening in 1984.

To some, the punk movement was a rejection of rock’s history—a reaction to a time when the deification of all things 1960s led to the radio playing the same few dozen classic-rock acts over and over. But I was never comfortable with that impulse. I was the kid who showed off my new Jesus & Mary Chain album to my friends, while leaving the latest Bruce Springsteen LP tucked away in my bag. So it was refreshing that the Repo Man soundtrack—an unassailable objet d’awesome among my peers—sent the message that the same people who were inking the Black Flag logo onto their notebooks should also be listening to The Stooges, Modern Lovers, and even Isaac Hayes and Ritchie Valens.

Maybe this seems like a weak legacy now: a movie and a soundtrack giving a timid kid the courage to like what he already liked. But for those of us who lived in flyover country in the mid-1980s—far from New York, Los Angeles, San Francisco, Chicago, Minneapolis, or anywhere else that was happening at the time—associating with a scene required a fair amount of copycatting. Because it was hard to find reliable information about what was really going on out there, we’d pass around records, quote from whatever magazine articles we could find, rent movies like Penelope Spheeris’ The Decline Of Western Civilization and Suburbia, and keep looking for a version of punk that was more authentic than the bandana-clad, purple-haired street toughs in Hollywood action movies.

In Repo Man, punk was really just part of the backdrop for a movie that was more about codes of behavior, secret knowledge, social satire, and unfettered pulp fantasy. Yet Cox got punk more right than anyone ever had on film to that point, by understanding that punk was an attitude as much as a sound or a fashion, and that the attitude carried a certain cynical wit. Having nailed that, Repo Man was free to expand the parameters, letting “punk” be guys in suits listening to art-funk versions of Jonathan Richman songs. Because the trappings didn’t matter. Regardless, the life of a Repo fan was always intense.

Our Movie Of The Week discussion concludes here. Don’t miss Monday’s keynote essay on Repo Man’s ideas, and Tuesday’s staff Forum about Repo Man’s relationship with consumerism, punk, identity, and more. Next week, to commemorate the release of Woody Allen’s new film Blue Jasmine, join us for a discussion of Allen’s 1983 film Zelig.