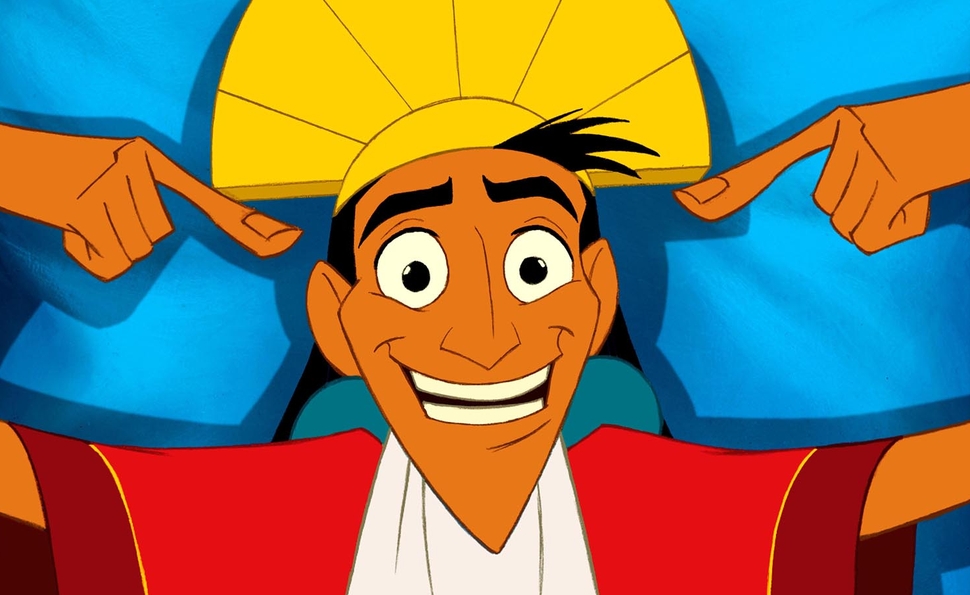 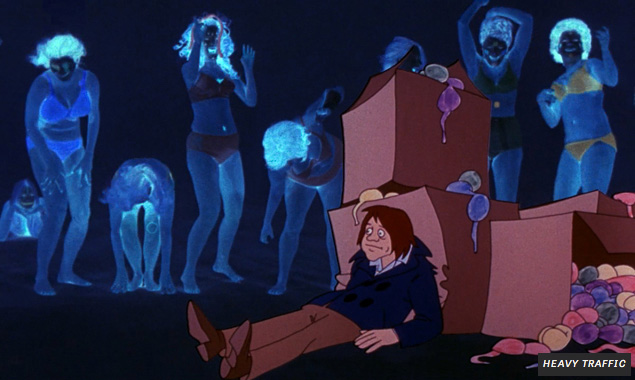 Ralph Bakshi’s 1973 feature Heavy Traffic, a dark, psychedelic wonderland framed as the wild fantasies of a sexually frustrated cartoonist living in the grubby New York City of the 1970s.

Tasha: Ralph Bakshi is somewhere between a beloved cult figure and American animation’s most successful crazy iconoclast. Most of his movies probably qualify as underrated, while not necessarily being entirely artistically successful. Why did you pick this one in particular, and what do you make of Bakshi as a creator?

Nathan: Bakshi has long been a blind spot for me. Normally, I’m attracted to figures who are cantankerous, divisive, and reviled by a goodly percentage of respectable folks. (Hell, I wrote a book about Insane Clown Posse.) Yet for some reason, I’ve never been that attracted to Bakshi. I suspect that’s because the first film I saw of his, Cool World, is generally considered his worst, and because he has a reputation as a man whose movies are striking, original, and groundbreaking, but not, alas, particularly good. Of Bakshi’s films, I’ve only seen Fritz The Cat, Cool World, American Pop, and Heavy Traffic, and that last is far and away my favorite of his oeuvre. Even then, I would have a hard time calling it entirely artistically successful. On the contrary, there is much about Heavy Traffic I find fairly repellent, like its attitude toward women, and its queasy intermingling of sex and violence. But I also find the film’s messiness and ugliness refreshing, and even kind of brave. Bakshi really exposes himself, his hangups, prejudices, and obsessions with Heavy Traffic in a way that’s bracing even four decades on.

Tasha: I believe I’ve seen all his released features, which do cover a wider gamut than the ones you’ve seen—the grim fantasy of Fire And Ice and Lord Of The Rings feels very different from his urban films, though Wizards is the weird, anarchic bridge between them both. What strikes me most about Bakshi films like Wizards, Fritz, and Coonskin, and especially Heavy Traffic, is that they feel like trippy, druggy dreams: There’s sort of a through-line, but not much of a plot, and they all hinge heavily on either the protagonist’s state of mind or the viewer’s. Do you think there’s an ideal viewer for these movies, or an ideal state of mind for watching them?

Nathan: Oh, definitely. Heavy Traffic is a head film, pure and simple, but Bakshi’s vision of the counterculture and its vices is less Woodstock than Altamont. The characters in his urban movies don’t tune in, turn on, and drop out to achieve inner peace or pursue nirvana; they smoke pot and swill booze to make a shitty world slightly less shitty. Their misadventures have the nightmarish quality of a trip that has gone sour. Bakshi doesn’t flatter his audience or himself. He traffics in dreams and fantasies, but his dreams and fantasies are pretty fucked-up. Without imagination and Bakshi’s wild, surreal flights of fancy, the world of Heavy Traffic would be unbearably grim; even with that free-floating craziness, Heavy Traffic can be a difficult, even painful viewing experience.

Tasha: So why do you recommend it? What do you hope people will get out of it?

Nathan: Because it is utterly original and unique. Watching the film, I really felt like I was rampaging through the troubled psyche of a brilliant, very screwed-up man. There are moments throughout Heavy Traffic when it feels like Bakshi is reinventing animated film as he goes along, that he’s throwing out all the rules and traditions and boundaries, and creating something completely personal, something vulgar and offensive, but also ferociously, unmistakably alive. Heavy Traffic is sour, ugly, and deeply cynical, which I think makes its moments of tenderness and sincerity all the more striking. It’s a goddamned mess, but one that says something poignant and true about what it means to be young and confused, and full of contradictory, difficult-to-exorcise impulses and emotions. 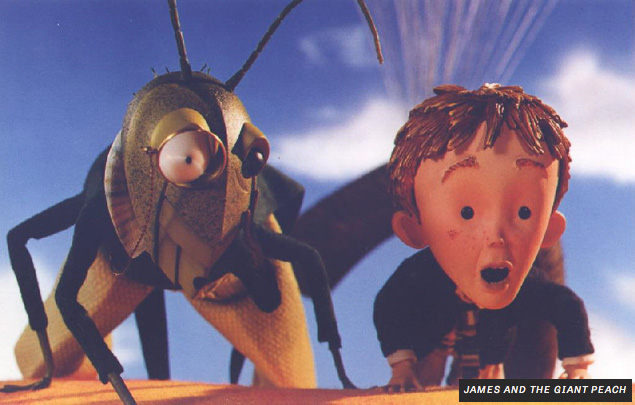 James And The Giant Peach, a 1996 stop-motion film helmed by The Nightmare Before Christmas and Coraline director Henry Selick, and adapted from a novel by British author Roald Dahl (Charlie And The Chocolate Factory, Matilda, The Witches). When a young boy living with two awful, abusive aunts is given a magical gift that accidentally produces a gigantic peach, he rides the peach off to adventure, accompanied by a group of super-sized crawly critters expanded to human size by the same magic.

Tasha: When the film version of James And The Giant Peach came out, one of the ads said something like, “Your favorite childhood novel has come to the big screen.” I found that hilarious, since it was one of my favorite childhood novels, but I could barely find anyone else among my generally well-read friends who’d heard of it, and it’s been just as hard finding people who love the film. I’m always glad to find another fan. Were you familiar with the book? Do you like this film as an adaptation?

Noel: I actually hadn’t read James before I saw the movie. My Roald Dahl-reading as a boy was fairly limited, which I blame on the original Willy Wonka film. My church showed Willy Wonka in the Sunday-school room during a potluck when I was 6 or 7, and trying to eat a plateful of random casseroles while watching a little girl blow up to the size and color of a giant blueberry turned my stomach, and subsequently kept me away from Dahl. (My daughter, who’s had no such traumatic experience, is a Dahl fanatic. She has about a dozen of his books, and has read them multiple times.) By the time I saw James, though, I was much more familiar with his peculiar mix of misanthropy and moral rigor, largely due to watching movies based on Dahl’s work. I remember being especially taken with this movie because by the time it came out in 1996, Disney’s new golden age of animation was already starting to turn formulaic, spawning a lot of pale imitators. And then here comes this dark, funky little stop-motion animated feature that didn’t feel processed or focus-grouped into blandness. There’s a real authorial voice to it.

Tasha: Henry Selick’s authorial voice has always been unique. He’s such a specific, idiosyncratic creator. How do you see his voice working here? What appeals to you about it?

Noel: It’s a combination of how Selick thinks visually and how he thinks philosophically, with the latter in this case serving as a fusion of Dahl’s bittersweetness and his own. James’ idea that he can will something into being—a giant peach, a makeshift family, an improbable journey to New York—speaks to the virtues of faith, kindness, and resourcefulness, but also to the power animators have to build entire worlds out of scrap. This fits with the way James looks, too. A lot of animators who work in stop-motion (even the computer-enhanced kind of stop-motion) tend to think of the frame as a diorama of sorts, and move characters within a tight box. But Selick thinks cinematically, using push-ins, insert shots, and off-kilter framing to create the illusion that he’s actually shooting real locations and characters, not inanimate objects and painted backdrops. It’s also telling how he modifies one of the scenes from Dahl’s book, turning a school of sharks into a mechanical death-machine. On one side, you have an eclectic band of insects and a large piece of fruit; on the other, rampaging technology. Selick stands up for the organic.

Tasha: The most organic part of the story is James, a squishy little human surrounded by giant versions of chitinous or wiggly critters. They’re all friendly and full of personality (and voiced by a terrific cast, including David Thewlis, Susan Sarandon, Simon Callow, and Richard Dreyfuss), but one of the things that makes this such a distinct, oddball fantasy is that most kids probably don’t lie around daydreaming about interacting with human-sized worms, spiders, and centipedes. What do you make of James, and of the film as a kid fantasy?

Noel: James is a classic kid-lit protagonist: orphaned and alone, like a proto-Harry Potter. One of the reasons the movie works so well is that Selick and his screenwriters take the time to establish how happy James was with his parents, until “the rhinoceros in the sky” took them. (I’m always moved by the observation that any pain his parents felt would’ve been over in seconds, while James was left to ache for the rest of his life.) James’ loneliness—and the way he’s being mistreated by his caretaking aunts—drives the action in the film, and also gives it strong melancholic overtones early on. I think one of the reasons why so many kids’ movies and books feature heroes like James is because it’s something children everywhere can identify with, even if they’re from stable, loving homes. Who hasn’t felt undervalued and lonely? And who hasn’t wished for a little bit of magic to completely transform the world?

This completes our Movie Of The Week discussion of Kirikou And The Sorceress. Check out Monday’s Keynote address on how the film resembles a Disney fairy tale in content but not form, and Tuesday’s staff discussion of the film’s animation, its comedy, and its visual roots. Next week, we’ll explore Mohsen Makhmalbaf’s strange, fascinating meta-experiment A Moment Of Innocence, in which the filmmaker unravels and re-creates a moment from his own life.