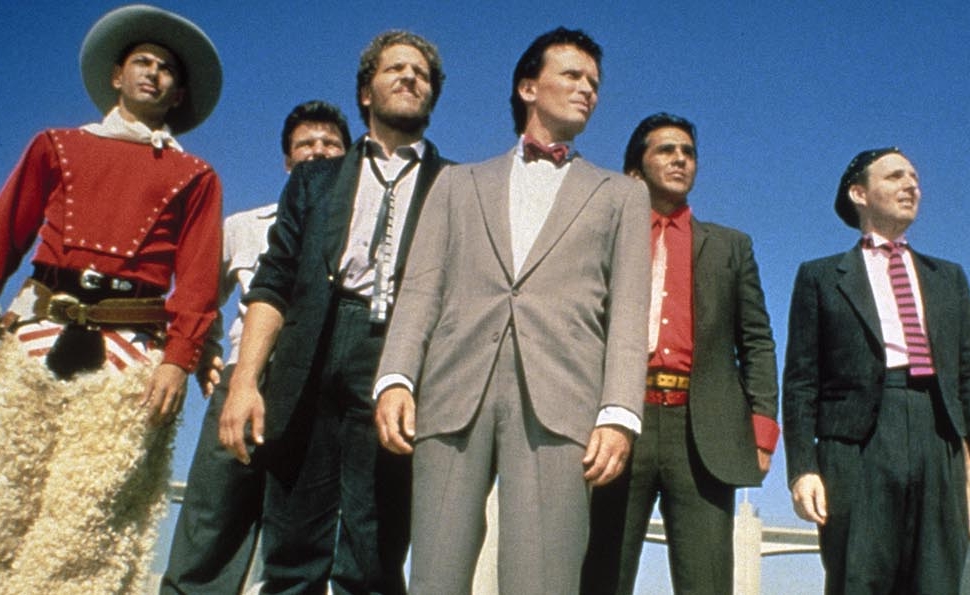 Keynote: The Adventures Of Buckaroo Banzai Across The 8th Dimension

“Don’t be mean. We don’t have to be mean. Because, remember, no matter where you go… there you are.”

It’s almost impossible to talk about The Adventures Of Buckaroo Banzai Across The 8th Dimension without quoting it, because the film’s language makes the film. When Buckaroo Banzai was released in August 1984, it arrived toward the end of a cycle of post-Raiders Of The Lost Ark adventure movies that were overt and even tongue-in-cheek about their debt to old movie serials, pulp magazines, comic books, and Poverty Row B-pictures. Then along came Buckaroo, written by Hollywood weirdo Earl Mac Rauch and directed by his weirdo mentor, W.D. Richter; and as soon as its characters opened their mouths, it was clear that something was out of whack.

It’s a slow-dawning out-of-whack-ness, though. The opening sequence of Buckaroo Banzai sees a cluster of muttering technicians—a staple of any 1970s and 1980s science-fiction film aiming for NASA-like verisimilitude—and a souped-up car being readied for a dangerous mission. All pretty standard so far. Then the audience learns that the test-driver, Buckaroo Banzai (played by Peter Weller), has been delayed by his other job as a brain surgeon. After Buckaroo arrives, he drives the car so fast, it phases directly through a mountain, and then he and his sidekicks race off to their other other job, as rock stars. Yet even all that isn’t as strange as what happens next, when Buckaroo, this doctor/rocker/genius/champion, stops his concert to comfort a crying woman with a little zen philosophy. By the end of its first 20 minutes, Buckaroo Banzai has ceased being another retro barn-burner inspired by old Doc Savage paperbacks. Buckaroo Banzai is like a Doc Savage paperback that’s passed through another dimension and has come back… changed.

Throughout the movie, people say odd, funny things in deadpan tones. In surgery, Buckaroo casually warns, “Don’t tug on that; you never know what it might be attached to.” At a tense moment, the United States Secretary Of Defense (Matt Clark) admits, “I’m barely holding my fudge right now.” A malevolent alien named John Bigbooté (Christopher Lloyd) scoffs at concerns over the fate of the Earth, saying, “It’s not my goddamn planet, understand, monkey-boy?” Buckaroo Banzai isn’t the only 1980s adventure film to shrug off seriousness. (That was pretty much the default mode back then.) But it’s the only one that seems to have been pasted together from college philosophy textbooks and Silver Age Action Comics, and the only one that crams more quotable lines into every scene than even most outright comedies ever do.

Quotability is an underrated element of movies, perhaps because critics often have a love/hate relationship with dialogue itself. It’s not unusual for hardcore cinephiles to distrust films that sound too “written,” or to bristle at lists of “The 100 Best Movie Lines,” which reduce complex works of art to a single catchphrase. But at the same time, for a large number of people, much of the fun of being a movie-lover is swapping quotes with like-minded fans. Dropping a Life Of Brian or Big Lebowski reference in the right situation, surrounded by the right people, extends the communal quality of moviegoing outside the confines of a theater. Even writer-director Barry Levinson recognizes this; in his 1982 debut feature Diner, he has a minor character walking around repeating lines from Sweet Smell Of Success, owning his love for the film by holding it tightly between quotation marks.

Buckaroo Banzai is an easy movie to love, though at times a difficult movie to understand. Rauch reportedly started concocting Buckaroo’s mythology in the mid-1970s, and wrote several unfinished screenplays before penning Across The 8th Dimension, a script that presupposes the existence of all those stories that never made it to the screen by alluding to past adventures and unseen characters. While showing Buckaroo effortlessly juggling half a dozen high-profile jobs—with the help of his many associates, identified as “The Hong Kong Cavaliers,” “The Blue Blaze Irregulars,” and “The Radar Rangers,” among others—Rauch and Richter gradually edge their hero into a convoluted plot. After Buckaroo drives his test-car through a mountain with the aid of his “oscillation overthruster,” a band of evil aliens known as Red Lectroids conspire to seize the technology, so they can free their people from the eighth dimension, where they’ve been imprisoned by the more righteous Black Lectroids from Planet 10. These same Black Lectroids—who speak in Jamaican accents—grant Buckaroo the power to see through the Red Lectroids’ human disguises, and demand his help in stopping the Reds, by threatening to fool the Soviet Union into thinking World War III has begun.

That (relatively) simple good-vs.-evil story is complicated by the addition of a mystery woman named Penny Priddy (Ellen Barkin) who resembles Buckaroo’s late wife, and by the machinations of a once-brilliant scientist named Emilio Lizardo (John Lithgow) whose consciousness has been fused with a Red Lectroid, and by the arrival of a new team member named Dr. Sidney “New Jersey” Zweibel (Jeff Goldblum) who dresses like a cowboy. And that’s not even taking into account the connection of the Red Lectroid plot to Orson Welles’ infamous War Of The Worlds broadcast, or the way all the Lectroids (male and female, Black and Red) are named “John,” or how the situation is monitored remotely by a U.S. president (Ronald Lacey) in an elaborate hospital back-brace. (That president sums up the plot thusly: “Buckaroo, I don’t know what to say. Lectroids? Planet 10? Nuclear extortion? A girl named ‘John?’”) 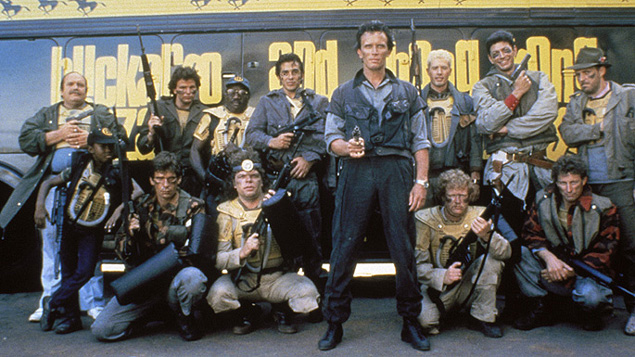 Yet Buckaroo Banzai is more watchable than baffling, thanks in large part to the cast. Weller plays Buckaroo as calm, confident, cool, and sincere, able to blow sweetly into a tiny trumpet or lead an international network of crime-fighters with equal aplomb. His low-key charisma contrasts well with his more exaggerated co-stars. There’s scarcely a role in the movie not filled by a one-of-a-kind character actor: Lloyd, Goldblum, Barkin, Clancy Brown, Dan Hedaya, Vincent Schiavelli, and more. The most memorably odd is Lithgow’s Dr. Lizardo (a.k.a. John Whorfin). Lithgow pays full attention to the villain’s personality conflict, bobbing back and forth with a hunched back and a simian brow, while barking out nonsensical aphorisms in an outsized Italian accent. Lizardo is responsible for roughly 40 percent of the best quotes from Buckaroo Banzai. (“Home is where you wear your hat.” “Laugh while you can, monkey-boy!” “I am sure in the miserable annals of the Earth, you will be duly inscribed!” “He’ll come… I know his type.” “Take her to the pit!”) And Lizardo becomes a kind of litmus test for how viewers ultimately feel about Buckaroo Banzai. From the moment he flashes back to his origin story by attaching electric diodes to his tongue, Lizardo represents the kind of excessive nuttiness that can either be read as an insignificant lampoon, or realer than real.

For those who see the character the second way, Lizardo is a tragic figure: a misguided mastermind infected with the brain of a homesick, somewhat dimwitted interplanetary warlord. And if Lizardo is a tragic figure, then so is the stoic widower Buckaroo, even with his square interjections like, “Oh! The deuce you say!” and, “Evil! Pure and simple from the eighth dimension!” These characters read as characters, and yet the more self-conscious phoniness they bring into the ways they talk and behave, the more they seem like part of a larger, more vivid cinematic universe. The wackiness of Buckaroo Banzai can make it seem frivolous, what with the president using “Declaration Of War… the short form,” and its litany of crazy names like John Many Jars, John Small Berries, and John Ya Ya. But for fans, all those tiny, funky details coalesce into a film with soul.

On the Buckaroo Banzai DVD commentary track, Richter suggests that part of the reason the film became a home-video cult hit after a poor initial theatrical run is that people returned over and over to the fantasy of a world where heroes work in tandem, with precision and style. That’s why Banzai-ites are fascinated by all the minor characters and mini-dramas that play out in the background of so many of the movie’s scenes. They all suggest a hundred avenues that Rauch and Richter could’ve followed—a hundred stone walls hiding a hundred other dimensions. And that’s also why people who love this movie enjoy talking to each other about “John Bigbooty,” in order to hear the correction, “Booté! Booté!” There’s a ritual to watching and re-watching a beloved film, not unlike going to church, and repeating the best lines is a lot like reciting a litany. To learn the lingo of Buckaroo Banzai is to become a true believer.

Tomorrow, our Movie Of The Week discussion of The Adventures Of Buckaroo Banzai Across The 8th Dimension will delve into the film’s singular cast, its home-video history, its inscrutable mythology, and more.