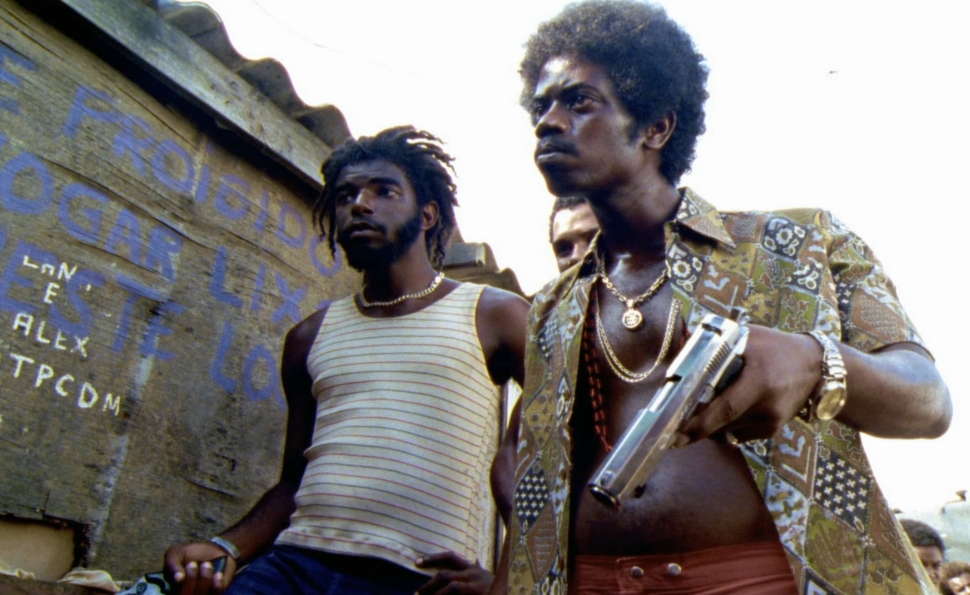 Fernando Meirelles and Kátia Lund’s City Of God begins with a clear metaphor laying out the movie’s central spine: At an outdoor barbecue in an infamous Rio de Janeiro slum, a chicken watches as other birds are killed, plucked, chopped into bite-sized tidbits, and seared over a fire. The chicken promptly loosens the tether securing it, and bolts for freedom, with a growing gang of excited pursuers trying to run it down or shoot it. The escape attempt seems awfully self-aware for a chicken outside of a Nick Park animated movie, but that’s because the animal is just a stand-in for the film’s narrator, Rocket (Alexandre Rodrigues). Like the chicken, he’s watched his own kind get killed all around him, and he’s seen that the only way to survive is to get out entirely. And like the chicken, he’s increasingly frantic as death seems to close in.

Meirelles doesn’t mean for viewers to miss the connection, either. (In interviews, he’s said he’s responsible for the film’s technical side, while Lund workshopped and coached the non-professional actors.) He and editor Daniel Rezende cut back and forth meaningfully between the fleeing chicken and the audience’s first glimpse of Rocket. As Rocket tells a friend about a possible job opportunity and his desire to avoid the notorious gangster Li’l Zé (Leandro Firmino da Hora), the shot jumps back to Zé himself, pursuing the chicken with gun drawn. As Rocket’s friend says, “If Li’l Zé catches you, he’ll kill you,” Meirelles cuts to the chicken narrowly escaping a looming police truck. Then Rocket’s path intersects with Zé’s, they face each other down, and time freezes as Rocket looks back on the events that brought him to this point. The chicken—never really part of the story, just an energetic illustration—is entirely forgotten. What matters is what happens to the man it represents.

The funny thing is that the threat Rocket is facing in that moment is entirely in his head. He thinks Zé wants to kill him, but once the film eventually gets back to that initial confrontation after nearly two hours of flashback, the face-off is instantly, casually resolved. The film launches not just in medias res, but in the middle of a false premise that doesn’t reveal itself until the film is nearly over. It all amounts to a giant shaggy-dog story with an offhanded punchline. (The intense drama that follows comes outside that loop.) But while that particular life-threatening moment is only baseless anxiety for Rocket, the overall danger isn’t. Like that chicken, he’s still surrounded by death.

And the story he tells to the audience between the bookends of the fleeing-chicken scenario explains all his urgency in trying to escape. It seems chaotic, and stylish for style’s sake, but there’s method to the madness. Screenwriter Bráulio Mantovani (working from Paulo Lins’ novel) tells a chronologically tangled story because life in the City Of God—an artificial slum where, according to Rocket, Rio forcibly parks its poorest people—is similarly tangled.

“The jumpy, jazzy approach helps makes the movie an unsettling thrill: At times, it’s hard for viewers to keep their bearings, and that’s entirely intentional.”

Rocket begins by narrating his own story, which starts with his childhood in the 1960s, but he immediately moves into what seems like a stream-of-consciousness mode: “To tell the story of the City Of God, I have to start with [Shaggy]. But in order to tell Shaggy’s story, I must tell the story of the Tender Trio.” He sticks with that story for a while, until it wraps up with his brother Goose running off, but as it happens, he doesn’t get to its real ending until he’s in the middle of another story entirely—Zé’s personal history. Still later, Rocket throws in some foreshadowing about a man named Knockout Ned (Seu Jorge), then backs off, saying it isn’t time to tell his story yet.

The way these threads cross, and the way Rocket calls viewers’ attention to them and the way he’s shaping them, are gimmicky in ways that have been compared to Quentin Tarantino’s style (especially Pulp Fiction), GoodFellas, and many other films. But the style does more than mimic other people’s successes, or jazz up a conventional crime story. They’re relevant because they illustrate how no one in the City Of God can live in isolation. In this claustrophobic environment, everyone is connected. Everyone knows everyone else’s business, and everyone’s lives are affected by what other people do. When Shaggy, Goose, and their friend Clipper, collectively known as the Tender Trio, hold up a propane delivery truck, everyone in the slum stands to benefit as they hand out free propane tanks. When they rob a hotel, everyone stands to be punished, especially in an environment where the primary form of police work involves randomly rounding people up and brutalizing them while demanding answers, or shooting a young man who was in the wrong place at the wrong time, then justifying the mistake by cramming a gun into his dead hand.

And throughout the film, Li’l Zé’s choices affect everyone, first as he becomes a mass murderer at a young age, then as he grows up and takes over the slum and imposes a vicious sort of order, then as he starts a gang war with his hubris and lust. Rocket can’t tell one story at a time because none of these stories exist on their own. They’re all part of each other. They all touch everyone in the slum, from the drug-dealing veterans at the top of the crime game to the Runts, the child mob at the bottom.

There’s one minor exception in the film—after the hotel robbery, Clipper has a Pulp Fiction-esque epiphany and abandons his life of crime because he wants to live. Meirelles expresses this with a strange, beautiful moment of stillness and slow motion. Clipper’s choice to go his own way is at odds with the rest of Rocket’s story, which he drops out of entirely. And his moment of clarity is appropriately at odds with the jazzy, nervy style of the rest of the film. In a film of cramped spaces and rooms crammed with people, his decision to set out on his own is expressed with abstract images of peaceful nature:

Rocket is a different kind of exception to the rule. While he’s affected by the Trio’s crimes and Zé’s violence and gang dealings—as a boy, he even plays accessory to Goose by misleading the cops, and as a teenager, he buys pot from the drug-dealing crew of the moment like anyone else—he’s more framework than participant. He’s so self-effacing as a narrator that he even initially forgets to introduce himself to the audience, and he apologizes for the oversight. At the end of the film, he similarly announces that he “forgot to say” he no longer goes by “Rocket”: He’s an adult and a professional now, without a street name. (Though of all the street names in the film, his is the most telling; he’s the local shooting star, the hometown hero who’s going to get up and out.)

As Rocket narrates the scenes, he’s often physically present, but he still isn’t primarily telling his story—at least not overtly. He creates transitions and connections, then returns to the background to let stories play out. His method reveals more of his true character than the things he actually says: He’s the observer, the chronicler, the journalist who’s putting all the pieces together and figuring out what they mean. His transition at the end to professional news photographer has been foreshadowed throughout the whole film. He’s a storyteller, making sense of chaos, and putting the focus on people more dynamic than himself.

None of this is to deny that City Of God is an expressive, stylish, at times show-offy movie. It does certainly engage in style for style’s sake. The filmmakers keep the energy level high with intense music, frenetic editing, and the constant promise of sudden, fatal violence. The jumpy, jazzy approach helps makes the movie an unsettling thrill: At times, it’s hard for viewers to keep their bearings, and that’s entirely intentional. But like that chicken at the beginning, the stylistic flourishes are more than they appear to be. In a community this tight-knit, everything is related, and no one can fully escape.

Tomorrow, our Movie Of The Week Forum discussion of City Of God will delve into the film’s take on crime, self-imposed law, the mythologizing effect of storytelling, and the contentious question of whether all that style gets in the way of the emotion.